At 10 players, the 2019 U.S. Blind Championship was larger than it has been since 2007.  It was also relatively strong, in that any of the top five rated players could have taken all the marbles. 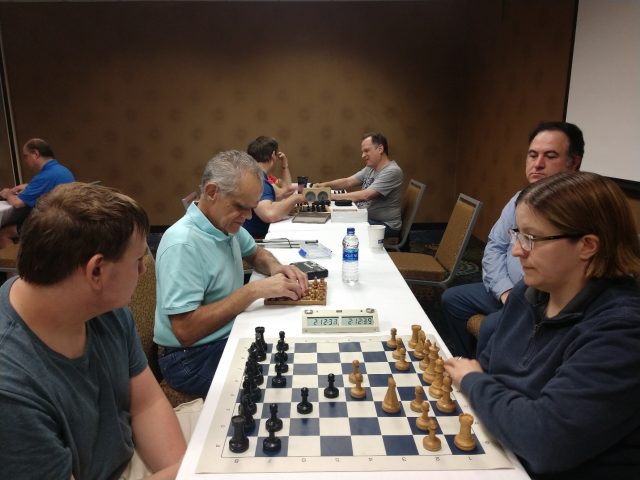 Lauser-Thoune (photo Nita Patel) Volunteer Jason Briegel is seated across from Lauser
Jessica Lauser successfully defended her title, but not before giving up a 700-rating-point upset draw to David Rosenkoetter in the first round.  In the third round, she defeated James Thoune, the 2017 champ, when his flag fell, spoiling a winning position.  Other leading players included Michael Davis, Al Pietrolungo, and Stephen Brumagin.  Thoune finished in second place, and Davis in clear third. A relative novelty was the participation of an unrated player, Evan Reese.   He was not inexperienced, because he has played online. Reese defeated Rosenkoetter and Brumagin, and finished with an even score. 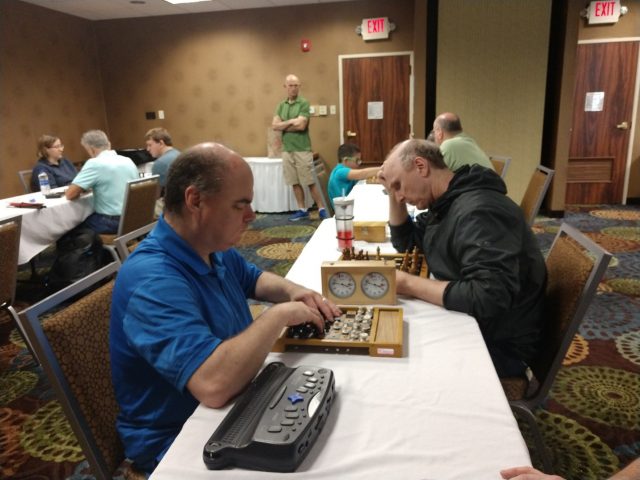 Brumagin-Reese. Reese is keeping score using a PacMate Braille display. (photo Nita Patel)
The tournament’s youngest player, Nathaniel Figueroa of St. Augustine, Florida, was accompanied by his parents and older brother.  Nathaniel attends the Florida School for the Deaf & the Blind, which has an active chess club.  His family accepted, on behalf of the school, a donation of four Braille chess sets donated by the U.S. Blind Chess Association. As last year, the tournament was organized and smoothly directed by Alex Relyea and Nita Patel. In this last-round game, Lauser surprises Pietrolungo with a nice mating combination after he lets himself be distracted by a win of the exchange:
SHARE: