I had the 2017 Reykjavik Open in my sights for a couple of months. After earning my final IM norm back in November and immediately tanking at the 2016 North American Open in December, I took a much-needed break away from competitive chess to re-evaluate where I was at and ask myself some tough questions. Did I still want to put in the immense time and effort to pursue the grandmaster title? Well yes, yes I did. OK maybe it wasn’t too difficult to answer the question. But as I started to ponder over which tournaments I should play to take my chess to the next level, everything about the upcoming Reykjavik Open just seemed to fit—the timing was good, the field was incredible, with stars like Anish Giri, Baduur Jobava, Alexei Shirov, Alexander Beliavsky (!) among others, and the fact that it’s become cheaper to fly to Iceland than ever before really cinched it for me, not to mention the large number of Americans that play in the event every year. 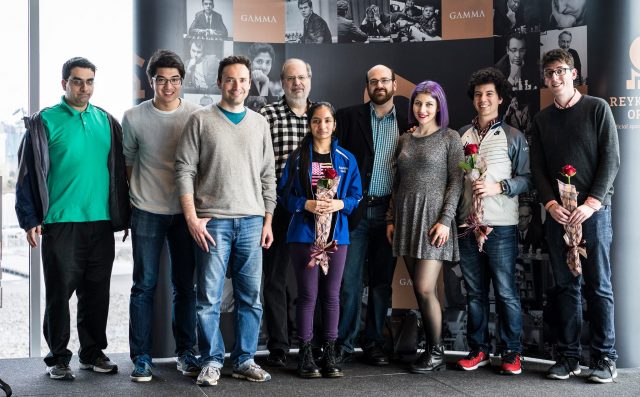 The American Contingent! (L to R: Justin Sarkar, Isaac Steincamp, Eugene Perelshteyn, Allan Savage, Akshita Gorti, Joshua Friedel, Tatev Abrahamyan, Alejandro Ramirez, Kostya Kavutskiy. Not pictured: Gata Kamsky, Marc Esserman, Awonder Liang) Photo: Lennart Ootes
So it was settled, and joining me this time would be CM Isaac Steincamp, who actually reached out to me last year after reading my article about my 2016 Chess EuroTrip. To put it mildly let’s just say I inspired Isaac to take a semester off from his studies at the University of Pittsburgh and engineer his own incredible EuroTrip. As fate would have it, Isaac and Tom Riccardi (my travel mate from last year) are now teammates at Pittsburgh! Isaac’s trip, which started in February this year, included travels to play in tournaments all over Europe, ending in Reykjavik. In total he gained 186 FIDE (!) rating points, which is mostly a testament to the fact that he was greatly underrated going into the trip, but still, what an achievement! Unlike last year, this time I was just traveling for the one event, and as luck would have it it turned out to be the best performance of my career: 7.5/10 with a 2505 performance rating, which was good for the Top U2400 prize, as well as shared 6-10th place overall! Not bad considering I was about the 60th seed going in! Anish Giri took down the top prize with a blistering 8.5/10. 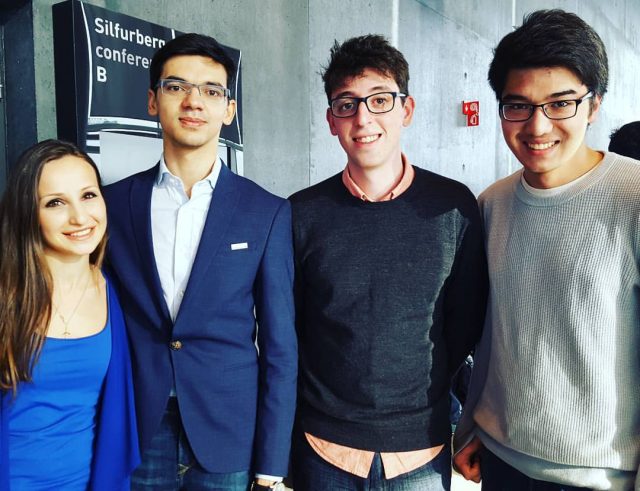 Isaac and I were big fan boys and snagged a photo with Anish + Sopiko at the closing ceremony!
Well, here’s how it all went down: The Reykjavik Open is a 10-round swiss that took place from April 19-27. It’s a very enjoyable tournament, one of the main reasons being it takes place at a pace of one round a day! The best part about that is that you have time to actually enjoy the chess. You get ample time to prepare for the round, then you play, and then when you’re done, there’s no second round to rush off to rest/prepare for. You have the evening off to go over the game with your opponent and conduct a proper post-mortem. The playing hall was located at the gorgeous Harpa concert hall, really one of the most beautiful playing venues one could imagine. The skittles area was located next to the in-house restaurant, and it wasn’t unusual to see 2700s enjoying a beer while analyzing their game. Honestly, I was not expecting to do well in the event. Having not played serious chess for a few months I expected to be rusty, and I did feel like I had to re-learn how to play, so to speak. Ultimately my only “goal” was to enjoy the game/trip as much as possible. I also came up with an interesting project for the tournament—having recently started a YouTube channel and wanting to create content for it, I decided to record an unfettered post-mortem of each one of my games, round by round. Unfettered in the sense that I would discuss my candid (sometimes very candid) thoughts on the game without first running the game through an engine or checking the opening database. Thus, the viewer could get my untarnished thoughts on the actual struggle, the critical moments, where I thought I went wrong or right, without the consistent caveat of “oh by the way, Stockfish actually says this”. Apart from creating what I thought would be an engaging concept, I also felt like it would be really great for my chess to critique my own games without Stockfish butting in every two seconds and ruining the fun. I pitched the idea to Isaac, who in his spare time runs Chess^Summit, a great site for improving players, and he instantly suggested a collaboration, wanting to join me in the game analysis. The show was born! Every night after our games were finished, we’d go back to our rented AirBnb and record the video. We took turns presenting our game and often discussed different variations based on our initial impressions. At the risk of sounding arrogant, the videos turned out to be incredibly instructive. Then we had to deal with the task of trying to get the word out about our video. Often this felt more challenging than the chess itself ?. We’d start off by posting on our respective Facebook and Twitter accounts. Then we’d share/retweet from other social media accounts that we are in charge of, as well as sharing each other’s links. Then we’d put up a link on Reddit with some kind of click-baity title, like “IM Kostya Destroys The London System In 30 Moves”. It was kind of exhausting, I have to say. But the response was good! Those who watched the videos enjoyed them, for the most part. At one point we decided it’d be fun to record a little tour of the event, to show our fans some behind the scenes of all the action. Here it is: Now on to the actual tournament! My first half was unsurprising in terms of the result and my quality of play. I"> won my first two games playing down, though not without some struggle. Then in Round 3 I lost to GM Josh Friedel without even knowing where I went wrong. It was a bit surreal, actually. My post-mortem with him was invaluable…it essentially turned into a private lesson about the game we had just played, as I really had no clue what was going on. I’ll present the game here without annotations; try to guess where Black went wrong, and then you’ll need to watch the video for the answer! (I’m getting better at this internet marketing thing). This turned out to be our longest video yet, which goes to show that we practice what we preach to our students: you learn more from your losses!! Thankfully, my mood was not spoiled one bit to lose the game as I did—I knew I would learn a lot from it. 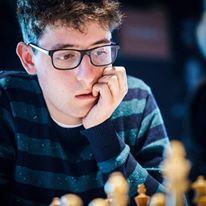 Round 5. Right before I got brutally checkmated! Photo: Lennart Ootes
I bounced back with"> a topsy-turvy win in Round 4 and then in Round 5 I faced GM Helgi Dam Ziska, the strongest player of the Faroe Islands. While the loss to Josh was purely strategic, this one was painfully dynamic. I badly misplayed a Sicilian and got wrecked (as the kids say) with a thematic Nd5 sacrifice: Check out my unfiltered thoughts on the game here">! At half-time my tournament took a dramatic upswing, as I finished with 4.5 out of my remaining five! I won in Round"> 6 and Round"> 7 with real ease and a real sound quality of play in these games, which would give me another crack at a GM in Round 8: GM Magesh Panchanathan, a friend who has been living in the U.S. for many years now. After some tough defense on my end we ended up drawing in"> a really interesting endgame. 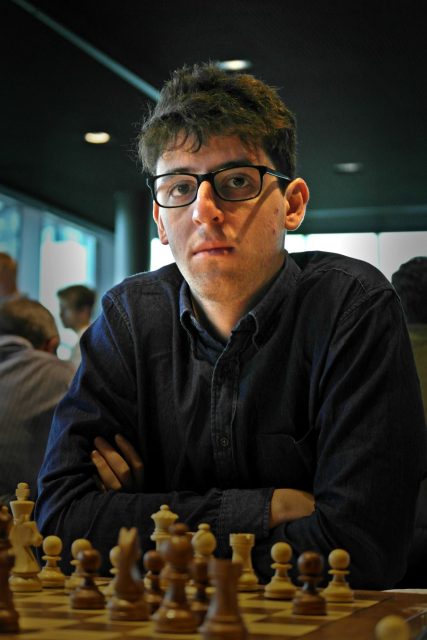 Round 8. It wasn't my turn so I looked at the camera. People say I look intense? Photo: Fiona Steil-Antoni
In Round 9, I was paired with IM Gudmundur Kjartansson of Iceland, actually another friend. While preparing my usual King’s Indian I saw that he had a number of games in the ultra-sharp Mar Del Plata variation in the Classical Main Line. You know, the line where Nakamura has beat down almost every top d4-player: Kramnik, Anand, Gelfand, and So, among others. Having never played it before, I felt it would be a good surprise for this game as I could prepare it quite deeply. My opponent made a bad decision to not deviate from his usual line, which was quite fortunate as I got a dream position from the opening and went on to win"> a lovely King’s Indian in style. Here’s my full analysis, including a detailed review of my prep: This put me in a great spot going into Round 10, I had 6.5/9 and was paired with IM Burak Firat of Turkey, who’s about 2500 FIDE. A positive result in this game would secure a huge rating gain and a prize. I showed up to the round a few minutes late, at which point Isaac greeted me at the entrance and broke the wonderful news: my game from Round 9 had won the Brilliancy Prize! This was a prize awarded by the organizers to the best game of each round. I was truly shocked, both Giri and Shirov also won fantastic games on the previous day, so it was quite humbling to say the least. My last round game was quite dramatic. I felt worse from the opening but my opponent overextended on the clock, spending too much time looking for a way to unbalance the game. In his time trouble, I seized my chance and forced"> an error to win a fine endgame: 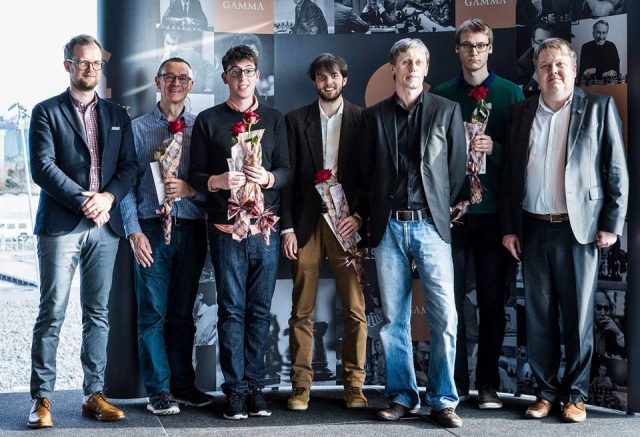 6th to 10th places! Kostya, standing next to GMs Nils Grandelius, Zoltan Almasi, Erik & Blomqvist. Photo: Lennart Ootes
And that was that! After I won, I couldn’t believe what I had done! 7.5/10 in one of the biggest opens in the world? I was just as shocked as everyone else! The closing was a blast, it was my first time receiving a prize in a European tournament, with all the fanfare, roses, handshakes and all, and, since I had earned 6th place along with Top U2400 honors, I ended up receiving two prizes, and two roses! So that was pretty sweet, not gonna lie ?. The congratulations and questions of a GM norm started pouring in on Facebook, but with just a 2505 performance, of course, I was quite far away from that coveted 2600. 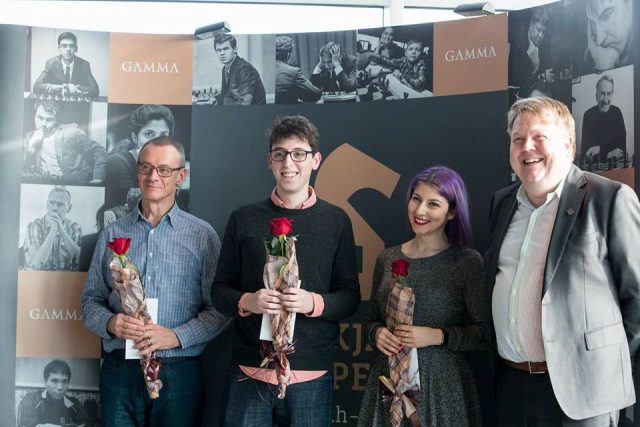 Top U2400! (L to R: John Pigott, Kostya Kavutskiy, Tatev Abrahamyan, & Tournament Organizer Gunnar Bjornsson) Photo: Maria Emilianova
Looking back on the tournament, I realize that I was in a really great mindset for most of my games and didn’t make any huge blunders overall. I stayed objective and made good, practical decisions. Now, I get to play the game of trying to figure out what went right for me in this tournament, so that I can try to recreate it for future events. Well, until next time, cheers! 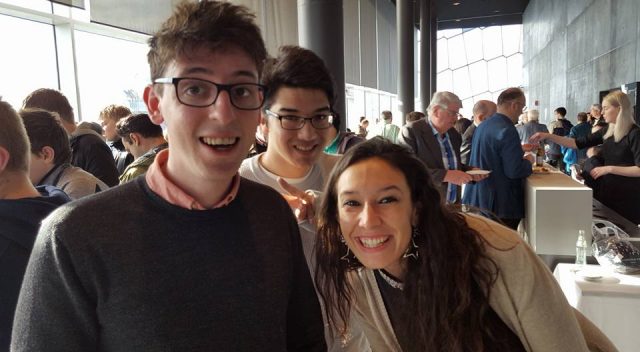