Kostya On Earning His Third (and Final!) IM Norm 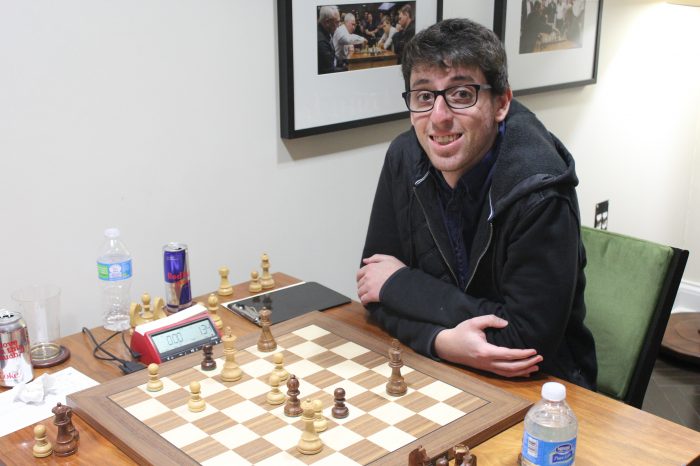 “The first norm is always the hardest”, I wrote, naively, back in 2014. I had just earned my first IM norm at the 2014 Spice Cup and echoed this sentiment that many titled players had mentioned to me earlier. I hoped it would be true in my case but in the past two years it didn’t feel that way. So let me correct myself: the first norm sure is hard but the last norm is sometimes the hardest. After earning my second norm at the 2015 North American Open, I spent most of 2016 chasing the final norm and missing out, sometimes tragically. A draw would have sufficed in Round 9 of both the Gibraltar Open and the Isle of Man International—and both times, I lost. But despite these setbacks my ambitions (to make IM and eventually GM) did not waiver. At times I felt depleted of motivation to continue studying and training, but several good friends supported me and kept my spirits high. A few weeks ago, I traveled to Saint Louis to take part in the 2016 CCSCSL Autumn Invitational, where I finished with a score of 6.5/9, good for shared first place and yes, that final third norm! I really have to thank all my friends and fans who supported me. And I definitely have to thank my coach, GM Elshan Moradiabadi, who has given me some invaluable help and advice. This was definitely an enjoyable event. As I’ve said before and have no problem repeating, the Saint Louis Chess Club is my favorite place in the world to play chess. The playing conditions were superb. Big thanks and shout-out to Jonathan Schrantz and FIDE Arbiter Mike Kummer, who oversaw and made sure the event ran smoothly, along with the rest of the hard-working staff at the CCSCSL. I started well with 3/4, two wins and two draws. In Round 1 I managed to beat the top seed of the event, IM Michael Brooks. The game was far from perfect but I managed to take advantage of my opponent’s errors. 16…Ba6 was a large strategic mistake, as it allowed White to take over the queenside while Black’s kingside play was always hard to get going. A tactical blunder ended the game somewhat abruptly:

In Round 2 I played against FM Lefong Hua, a friend who I met at the previous CCSCSL Invitational held in June of this year. Our draw was long, full of mistakes, and quite interesting, as analyzed in my article on the event. This time around we drew again, though in much fewer moves—Lefong found a nice rook sac that led to a quick perpetual: After the game we talked for a bit about chess, our ambitions, and so on. Lefong is a successful chess teacher up in Montreal and a member of the Chessbrahs, who I’m sure are well known to the US Chess audience (if not check out their YouTube channel!). With both of us at 1.5/2, we started rooting for each other for the rest of the tournament. 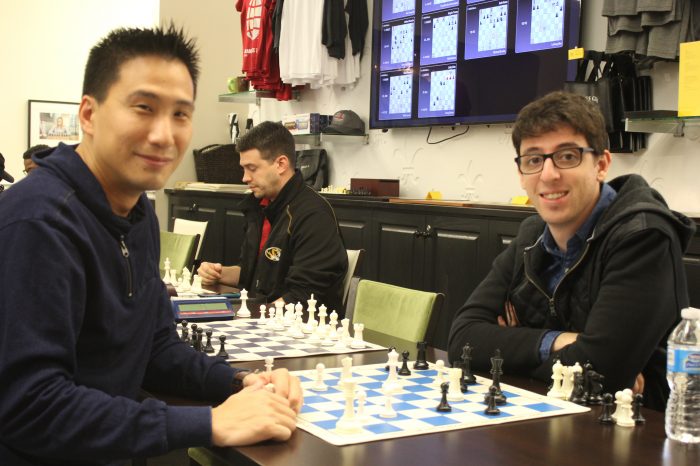 Lefong & Kostya. A quick photo-op after analyzing the game.

Then in Round 5 tragedy struck. I was playing White against FM Josh Colas and got a nice position from the opening. I then started aggressively advancing my pawns on the kingside under favorable circumstances. My position was good! But a few moves later I lost the thread of the game, and even went on to lose from an equal position. At this point despite having 3/5, still in norm contention and within half a point of the leaders, depression hit me and I let go of my hopes for the tournament. Scoring 3.5 from the last four games would be tough, so I didn’t think I’d to achieve it, honestly. I expected to continue to slide and braced my confidence to take another hit. After a nice dinner took my mind off things for a second I did, however, commit to giving it my all anyways, to use every bit of energy I had in the last few days. The next morning I was Black against FM Gauri Shankar, yet another friend. I knew this game was winnable but I did not expect to win. I tried and really focused, my motto was to just “keep the game going” and look for a chance to exploit a mistake, any mistake. Gauri gave me that chance, when he misjudged a simplified position after a few exchanges. I had control over the only open file and eventually transformed the advantage into a powerful passed pawn, which I then transformed into an attack on the king. It was a nice win. Now I needed 2.5/3, and I was facing IM Vitaly Neimer next, who thus far looked to be in excellent form. I got a small advantage which then faded in the middlegame but eventually I was able to break through and reach a winning queen vs. two rooks endgame. I did everything right until the last moment, when I allowed Black’s king to get too close and hold the defense. Draw. This was mildly devastating. I felt I played well and deserved a win against the strongest player in the tournament, but a drop of energy in the final phase of the game cost me a half point. Now I needed 2/2 to get the norm. Not to be so obvious but it would have been really nice to just need 1.5! At this point Lefong was also on 4.5/7 and needed to win his last two games for the norm. In my head I didn’t think I’d make it but I really hoped he would. My Round 8 victory over FM Seth Homa is one of my most aesthetic wins ever, but as is always the case it does take two to create a brilliancy. Seth took a risk in the opening which didn’t pay off, and one mistake gave me a powerful initiative which I soon turned into a decisive attack: I couldn’t believe that after essentially giving up I managed to get within striking distance of the norm. In Round 9 I was paired with IM Angelo Young as Black. Known for his enterprising and uncompromising play, Angelo was the ideal opponent to face in the last round when one is needing a win. Lefong also won in Round 8 and needed to beat Josh Colas in the last round. We bonded for a bit the night before the final game, talking about the pressure, the highs and lows of the game, and other points where the philosophies of chess and existentialism seem to merge. My opening in the final game was an absolute disaster. After 10 moves we reached a position where I was simply devoid of any winning chances, and even in danger of getting mated quickly. I again started coming to terms with the certainty that I would lose the game, finish with 5.5/9, sans norm, and grit my teeth while waiting for the next opportunity. I started feeling guilt for all who were watching live and rooting for me, my father, my coach, my friends—I’m sure it wasn’t very fun for them to see me trying to win from a hopeless position! I spent some time in the land of self-pity and eventually came to the conclusion that I should probably not outright give up on the game. My goal shifted from winning to just “keep the game going”, survive long enough and hope that Angelo would make a mistake in our eventual time trouble. Well, the game was dramatic, that’s for sure: At some point during my endgame I saw Lefong and his opponent shake hands and sign their scoresheets. Last I had seen, Lefong was down a pawn in a simple queen endgame--I assumed they had either drawn or Josh won. I felt depressed again—I wasn’t going to get the norm, but Lefong deserved it. You could imagine my shock when I saw their final position:   With plenty of time on the clock, Josh mixed up his intended move order and blundered his queen. We had both made 6.5 and tied for first, each securing our norm. As you can imagine we celebrated the whole night. The event ended on November 22, and my 24th birthday was the very next day, so there was a lot to celebrate. To add to the excitement IM Akshat Chandra also made 6.5/9 and tied for first in the GM section with GM Priyadharshan Kannapan, securing his final GM norm in the process. (long overdue in my opinion)! 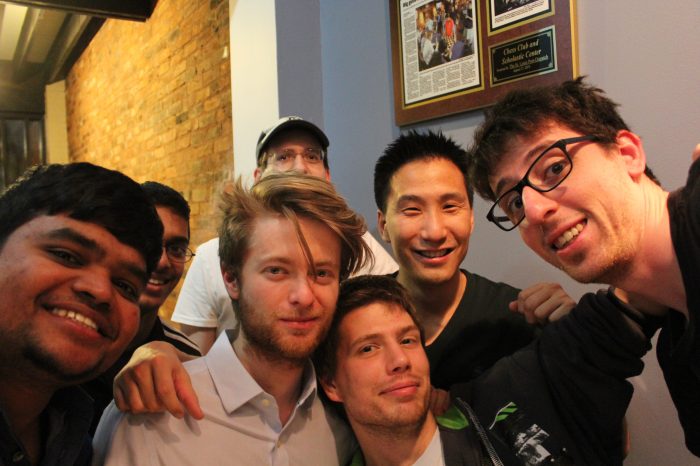 Earning the final norm before turning 24 at midnight was a lovely birthday present, as about a few dozen people pointed out to me :) But in the contest of combined chess/birthday achievements I was to be greatly outdone just a week later, as Magnus Carlsen successfully defended his World Championship title precisely on his 26th birthday. It really means a lot that I actually managed to make International Master. This has been a large goal of mine for many years and there were many times when I thought it’d never happen. I’m so grateful for all that supported me, even if it was just a simple “you got dis” at an appropriate time. Looking forward I’ll be working hard to go for the Grandmaster title. Wish me luck and stay tuned! Kostya Kavutskiy is a professional chess player, coach, and author currently residing in Mountain View, CA. His first book, Modernized: The Open Sicilian was published in February 2015. For more of Kostya, check out his official Twitter and blog. Find out more about the Autumn Invitational here, including the GM section where Akshat Chandra earned his final GM norm.