Kostya on Coaching the World Cadets: From Medals to London 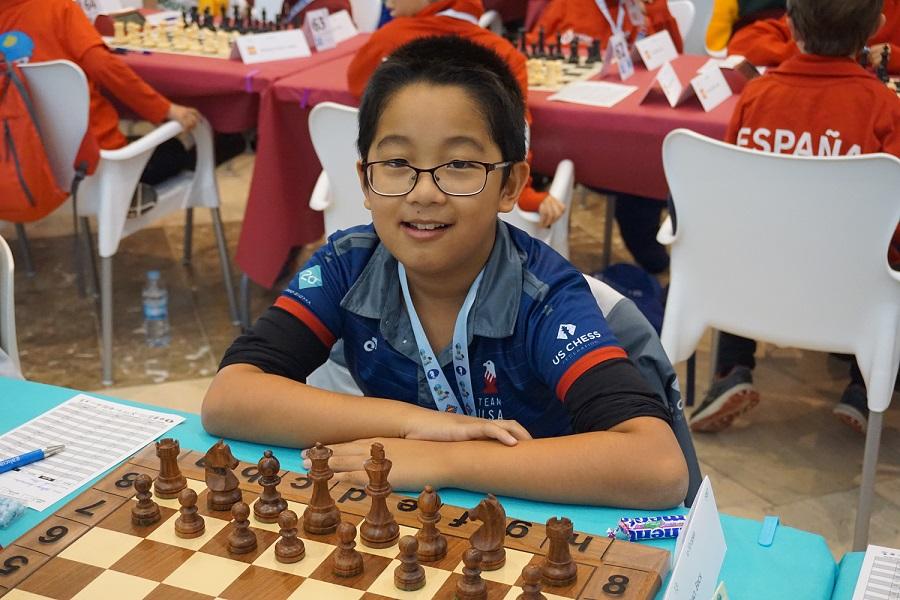 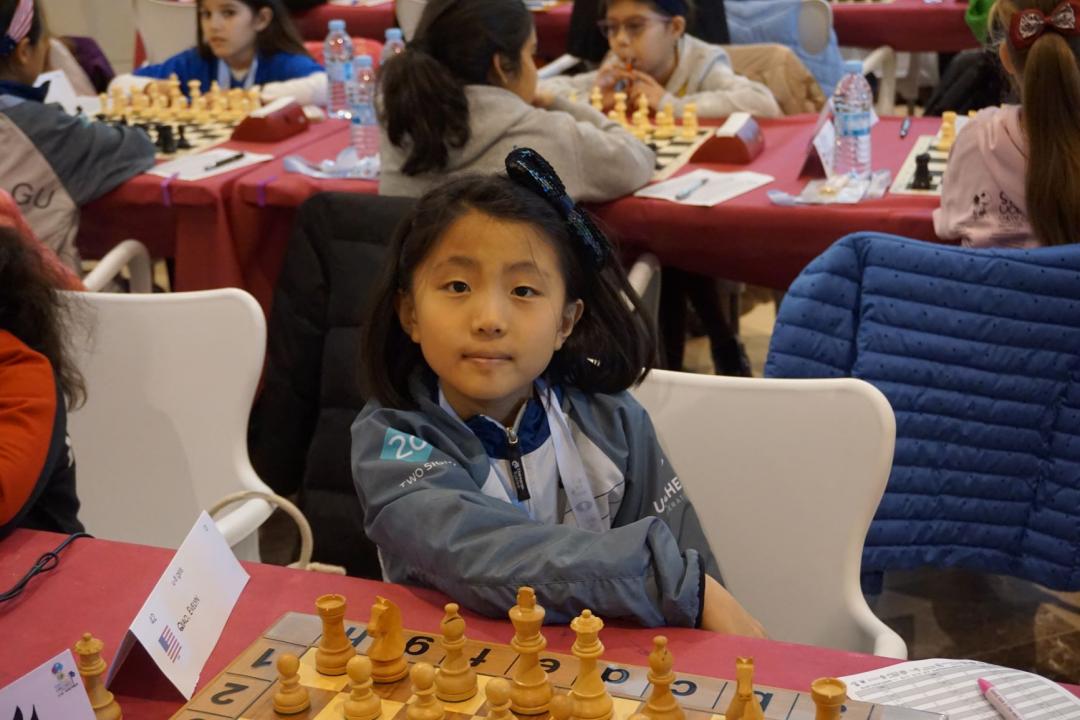 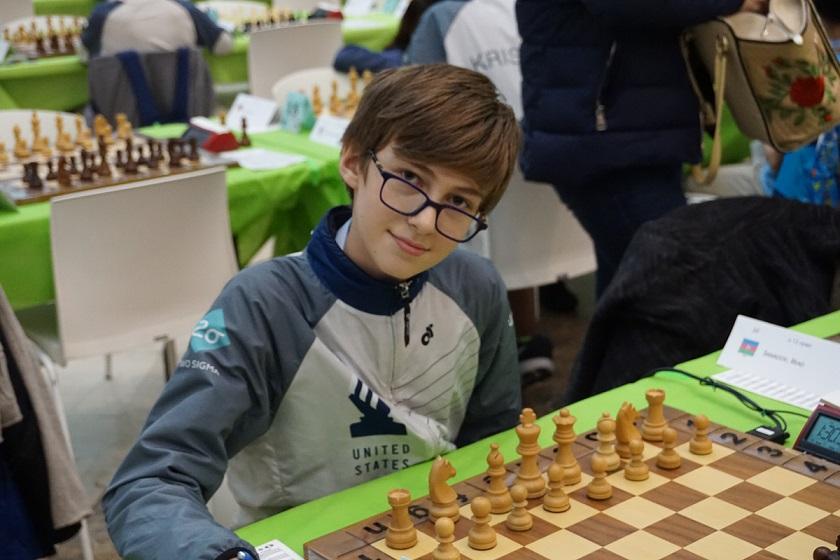 I got the call to work as a coach for the U.S. National Youth Team back in August, my second time this year and again to my great delight, as it’s long been a serious goal of mine to work with top juniors in international tournaments. The 2018 World Cadet Championships took place November 4-15 in Santiago, Spain, and coincided perfectly with the Carlsen – Caruana World Championship match in London during November. So naturally after the World Cadet was finished I hopped on a plane over to London to witness some chess history in the making. Here’s my recap of both events: SANTIAGO As reported before, the U.S. team earned four medals from the six individual sections of the World Cadet Championships, which included Open U8, U10, U12 and Girls U8, U10, U12. With 30 official players, each of the coaches, IM Armen Ambartsoumian, IM Andranik Matikozyan, GM Robert Hungaski, GM Alex Lenderman and myself were assigned six players each to work with for the event. The 11-round tournament took pace at one round per day, which offered ample time to prep with each student before the round. The starting time of 4pm, however, felt a bit late for a youth event, as late-finishing games would finish past the bedtime of a lot of kids, leaving little time to eat dinner and go over the game as one would like. One of the many reasonable gripes we had with the official organization! The rest of the team included the Head of Delegation, Aviv Friedman, who basically oversaw every organizational aspect in Spain, making sure the players, coaches, and parents were given the best chance to succeed and making sure to keep the organizers as accountable as possible (there were a lot of mishaps, but I won’t get into it here as the large U.S. delegation was treated much better than other teams). Aiding Aviv was Grant Oen, who helped with any issues that came up, took many great photos, and contributed timely updates to US Chess during the event. Also integral were Pete Karagianis of US Chess, who organized many aspects of the trip from back home and Noah Chasin, who served as the parent coordinator, an important role when it came to mass communication. Our full delegation was about 75 players, but our top star was undoubtedly gold medalist Raj Chennareddy, who took first place in the Open Under 8 with 10.5/11, winning his first nine (!) games in the process. I was tasked to work with Raj on-site after being contacted by his main coach back home, GM Mesgen Amanov, who recently wrote a wonderful article about his experience training Raj right from the start. 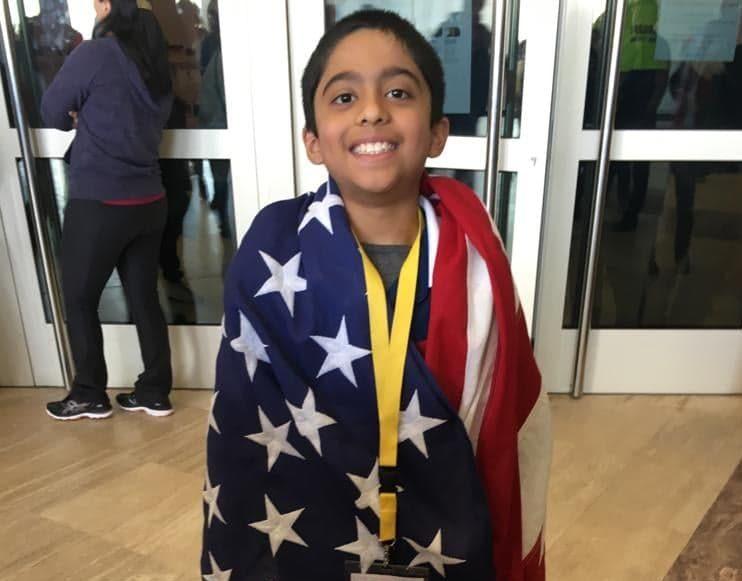 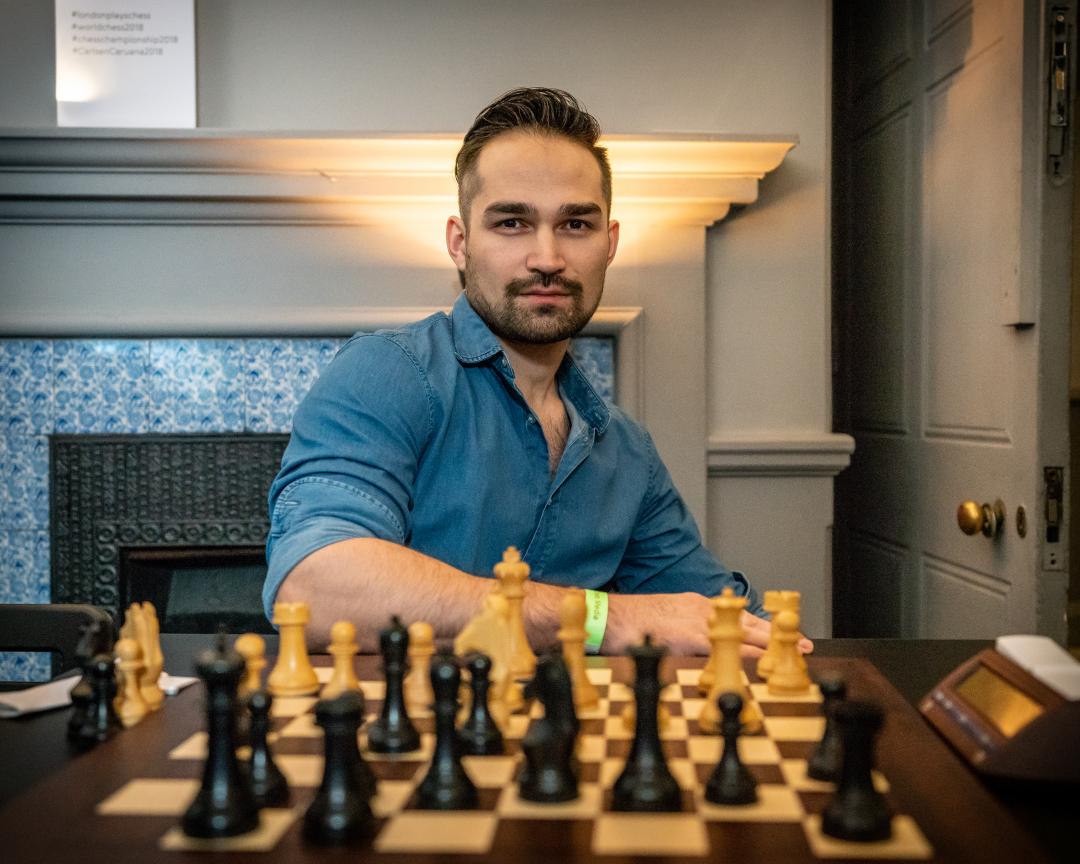 I really enjoyed my time coaching Raj during the World Cadet. Many talented players are lazy about learning their opening lines, or studying the opening in general. Not Raj. It was pretty clear early on that he was a hard-worker with a good memory and an excellent attitude towards chess. His earlier games were a bit easy, but starting from Round 3 they were all tough, and he had to work quite a bit for every point, showing his incredible fighting spirit by continuing to look for chances in equal positions. His game from Round 7 stood out in this regard—after outplaying his opponent to reach a winning rook endgame, Raj’s technique slipped and he couldn’t figure out how to win three pawns up, eventually allowing his opponent to reach a drawn position. With 6/6, we all expected Raj to offer a draw and go home, but he kept pressing and after over 100 moves of play his opponent made a grave error and Raj was able to finally convert:

By winning his next two games, Raj just needed a draw to clinch the title in the 10th round. He made it, by the skin of his teeth against a determined opponent who couldn’t stop playing quickly in a winning position. Now when a player clinches a tournament with a round to spare, it’s quite hard, psychologically, to stay motivated for the last game, which now counts for very little. But Raj kept his head, stayed focused, and won with ease, reaching a truly dominating 10.5/11 against the field. For an eight-year-old, Raj showed true mental strength throughout the event. Raj’s mom, Prathima, also deserves a lot of credit—she made sure Raj ate well and napped before every game. With the rounds starting later in the day, it was of real importance that players showed up well-rested and properly energized! I believe the daily rhythm preparation and rest allowed Raj to settle into a nice groove for each round. Also with an excellent performance was Erick Zhao, who was not one of the official players but instead worked with his own coach remotely, and performed excellently to tie for first in the Open Under 10 with 9/11, taking second place and the silver medal on tiebreaks. Erick was very close to earning the gold himself—after winning the last round, it took a late round blunder in order for Jin Yueheng of China to win and catch up to Erick, earning gold based on a better tiebreak. Since winning silver, Erick capped off 2018 with another great result, sweeping the 4th grade Championship in December in Orlando, Florida. A cool video was posted recently about Erick’s coach and training methods via Chessable: Our other two winners were bronze medalists Evelyn Qiao (Girls Under 8) and FM Nico Chasin (Open Under 12). Neither of these players were favored to win their sections, but both maintained great form, especially in the second half of the event, to snag third place. Evelyn Qiao came into the event as an unrated player and drew her first game against another unrated player, Yunqing Zhao of China. She then won her next game but lost in Round 3 to one of the favorites in the section, Veronica Iudina of Russia. 1.5/3 doesn’t seem like such a great start but it sounds a lot better when you find out that Evelyn’s opponents, Zhao and Iudina, ended up taking first and second place overall! Evelyn went on to score 7/8 in the rest of the tournament to earn clear third place, which included a nice win as Black over another strong player: Nico Chasin had a similarly tough schedule in the Open Under 12—after starting with 4/4, he was then paired with FM Christopher Yoo, the 2nd seed in their section. Nico traded the queens early on and took the game into an endgame where he could play for two results—and after a few mistakes by Christopher, Nico was able to take advantage and collect the full point. With 5/5 Nico earned himself a pairing with the top seed and rising star, IM Gukesh D, who won their game and looked fairly unstoppable in Santiago, eventually securing gold with 10/11. But this turned out to be just a minor setback for Nico, who continued confidently, scoring 3.5 in his final five games, including this interesting encounter with another strong player, FM Sebastian Kostolansky (Slovakia): After this win, Nico ended up with 8.5/11, tying for second place with three other players, including fellow American IM Arthur Guo. The tiebreaks remained unclear for a while but eventually it was official: Arthur finished in fourth, Nico took third, and FM Volodar Murzin (Russia) finished second. Coaching such young players is no easy task, and I’ve gained a lot of respect for trainers who do this full-time. In addition to needing deep chess knowledge and the ability to pass it on, a coach has to manage the emotional swings of the player very carefully—too much excitement after a win can lead to laziness in the next game, while after a bad loss a player often needs a bit of positive reinforcement to restore their confidence for the next day. To encourage mental stability, I tried to remind my students that regardless of their performance, they were going to gain a ton of valuable chess experience just by virtue of putting in their maximum effort in each game. 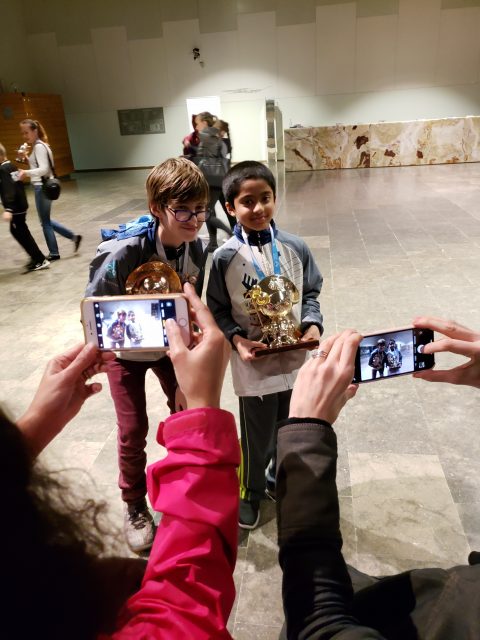 LONDON After the World Cadet Championships finished, my schedule allowed me to head to London for a couple of days, where I managed to catch Rounds 7 and 8 of the Carlsen – Caruana World Championship Match. This was my first time seeing a world championship take place in person, so I really tried to take in as much as possible. My ‘spectator experience’ was cool--I enjoyed watching the players live, and even witnessed some dramatic moments from the viewer hall. I also had a lot of fun simply following the match online, and tweeting about it too! There was so many places to watch good coverage that the best place to follow all aspects of the match was Twitter, where the highlights of each stream would quickly be posted/shared, giving the spectator a real-time view of not just the game but also what everyone thought about the game as it progressed! After the exciting Round 8, I was in town for another day and got a chance to participate in a fun blitz tournament hosted by Chessable + IM John Bartholomew. The format was quite unique: the players were divided up into groups and each given a mask of either Carlsen or Caruana. I thought the point was to play a blitz event where you couldn’t see your opponent’s face, but that idea was quickly abandoned by players who wanted to see the board. I ended up winning my section, qualifying for a knockout playoff against the other section winners. I won my quarterfinal and semifinal match (the time control was 2+0), but lost against John Bartholomew in the final, landing me second place! 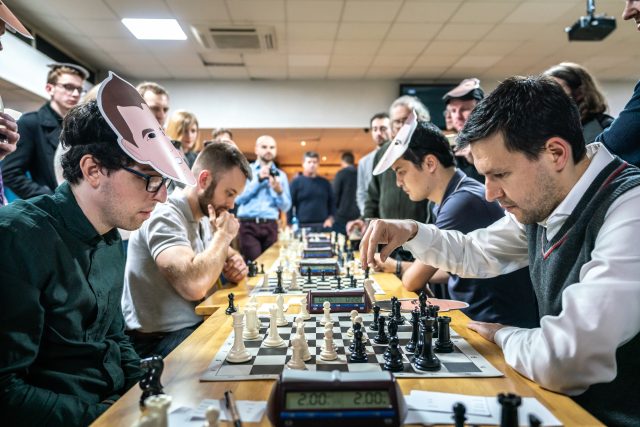 Overall, my experience in London was tremendous. I got to meet a lot of new faces, as well as run into some Americans that I hadn’t seen in years, who were also visiting London to root for Caruana. The day after the Chessable blitz event, I flew back to my hometown of Los Angeles, just in time for Thanksgiving and to catch the rest of that incredible match. Next up, I’ll be playing the Bay Area International and Gibraltar Masters, both taking place in January of next year. Time to put some of that World Championship experience to good use, so wish me luck! IM Kostya Kavutskiy is a professional chess player, coach, and writer, and can be found active on Twitter. Also make sure to check out his Patreon page for instructive chess analysis and advice for improvement.