Kostya at the 2017 Isle of Man International 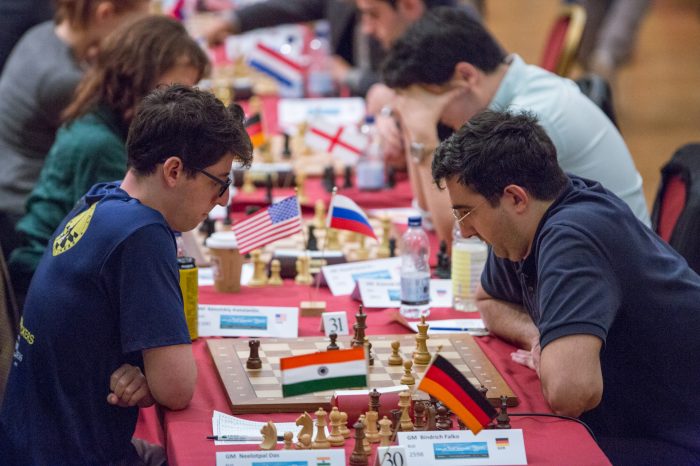 IM Kostya Kavutskiy vs. the 14th World Champion, Vladimir Kramnik. Photo: Chess.com / Maria Emilianova
With Anand, Kramnik, Caruana, Nakamura, Gelfand, Adams, and dozens of other strong Grandmasters all signed up, the 2017 Isle of Man International was already shaping up to be one of the strongest open tournaments of all time, and that was before World Champion Magnus Carlsen decided to join the fray! In Carlsen’s own ironic words, he wanted to play after being “knocked out of the World Cup rather prematurely”. Of course, much of the top players' participation was dependent upon whether or not they were still in contention for the FIDE World Cup---so yes, I secretly rooted for all the top players to get knocked out quickly so that they'd surely play the Isle of Man! While my own participation in this event was quite spontaneous last year, this year the trip was well thought out, and I was lucky to be joined by three fellow American chess players: GM Eugene Perelshteyn, IM Michael Brown, and IM Keaton Kiewra, my travel mate from last year. We booked an AirBnb about 10 minutes away from the playing venue, and every day we got to enjoy views of the sea as we walked to the event. We also heavily enjoyed the food on the island, often planning our dinners as much as we planned our openings for the day, if not more. This tournament was truly one of the most eventful that I've ever played---it seemed like every round there was some new story! Those who followed the tournament probably heard about most of the drama, starting with the ‘random pairings’ used for the first round, then the continuation of Hou Yifan’s pairing controversy from the Gibraltar Masters, then the stunning upset of GM James Tarjan over Vladimir Kramnik! And of course while all this was happening, Magnus, seconded only by his new romance, was delivering an open tournament performance of a lifetime, clocking in at 2903! My tournament progressed like a yoyo, one that's familiar to many class players, where you play way up then way down and so on and so forth -- in Round 1, I faced GM Falko Bindrich of Germany, losing the thread of the game in the middlegame and eventually going down in a difficult rook endgame. After a win in Round 2, I earned the chance to play another GM, and indeed in Round 3, I got paired with the legendary GM Ivan Sokolov! I had just spent 2 weeks watching him do the official commentary for the Tbilisi World Cup, so it was quite surreal to be in front of him at a chess board. Unfortunately, I lost the game rather quickly, but he was quite gracious when we discussed the game afterwards, so my mood was still mostly positive. A win in Round 4 gave me another crack at a strong player in Round 5: IM Nihal Sarin, one of two currently exciting prodiges from India, the other being Praggnanandhaa Rameshbabu (or 'double Anand' for short, as famously dubbed by GM Simon Williams). I was quite happy to have won the game, but I could have easily spoiled it in the final moments: Winning this game meant I had broken free of the proverbial 'yoyo' and, with +1 in such an event, was set to face an even stronger player. As it turned out, I ended up paired with none other than...Kramnik himself! Being the lowest rated player in my score group, I was paired "down" against the highest rated player with half a point less. It's pretty safe to say I was thrilled, floored even. Kramnik has been a personal idol for years, and an absolute legend in his own right. It was a definite honor to play against him. I prepared my trusty King's Indian for the game (which was quite memorable all on its own) and was actually doing fine! Well, for a while: I wasn't upset about the loss at all as I learned a great deal, but it was a bit disappointing that he left quickly after the game. All in all, still the highlight of my trip! I bounced back quickly with a clean win over IM Martin Zumsande of Germany, which got me paired with GM Rasmus Svane (another German!) in Round 8. I prepared well for the game, but tried a little too hard to win in a drawn endgame and ended up blundering and losing. This was definitely a shame, as another half-point would have secured a fantastic tournament. In Round 9, I ended up losing again, this time to IM Aman Hambleton of Canada. And I wasn’t too upset about this one either, as it was an especially complicated game which could have gone any number of ways. Thus, I finished my tournament with just 4/9, gaining just a few rating points. Overall, I felt fantastic about the experience, I got to play so many strong players and learned a great deal from all of my encounters. 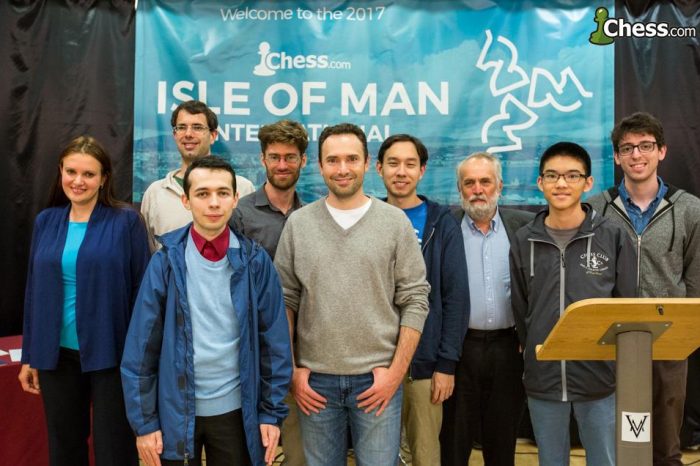 The American contingent at the Isle of Man Open (left to right): Anna Zatonskih, Keaton Kiewra, Aleksandr Lenderman, Marc Esserman, Eugene Perelshteyn, Michael Brown, James Tarjan, Jeffrey Xiong, Kostya Kavutskiy (not pictured: Fabiano Caruana, Hikaru Nakamura, Varuzhan Akobian, Christopher Yoo). Photo: Chess.com / Maria Emilianova
Of course, my travel mates also had quite compelling tournament experiences. The excitement started in Round 2, as Keaton got paired with GM Sergei Movsesian and Eugene got paired with the one and only Magnus Carlsen! First, Keaton put in a lot of effort and began ‘sacking the house’ against his esteemed GM opponent. In mutual time trouble, he missed a few powerful continuations and ended up losing in an endgame: 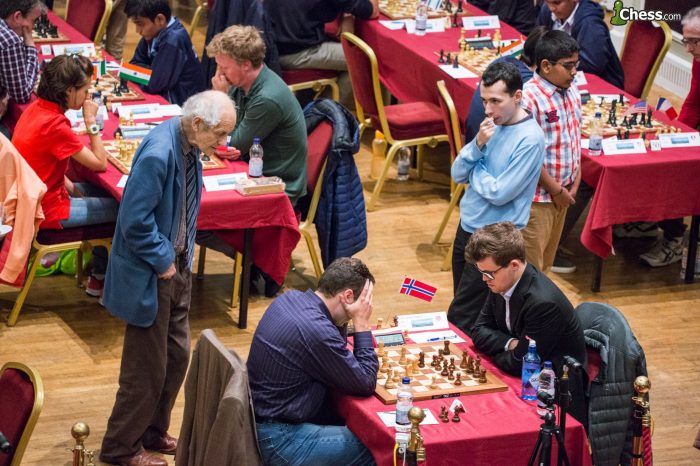 Eugene Perelshteyn vs. Magnus Carlsen. Photo: Chess.com / Maria Emelianova
Meanwhile, Eugene was well focused for his big game against the World Champion, and really took it to Magnus, playing for the initiative right from the start. I think this was absolutely the right approach, as Magnus is unstoppable when given the type of position he likes, with small strategic advantages that he can use to grind and grind and grind. The only way to have a chance is to truly sharpen things up! 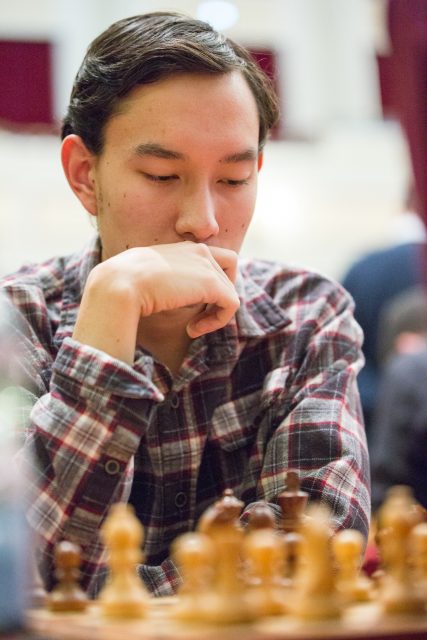 IM Michael Brown. Photo: Chess.com / Maria Emelianova
Last but not least, Michael was having the tournament of his life, hanging in there with GMs left and right. It all came down to the final round, as he needed to defeat legendary Hungarian GM Zoltan Almasi to earn his second GM norm. The end of this game was one of the most exciting that I’ve witnessed personally: 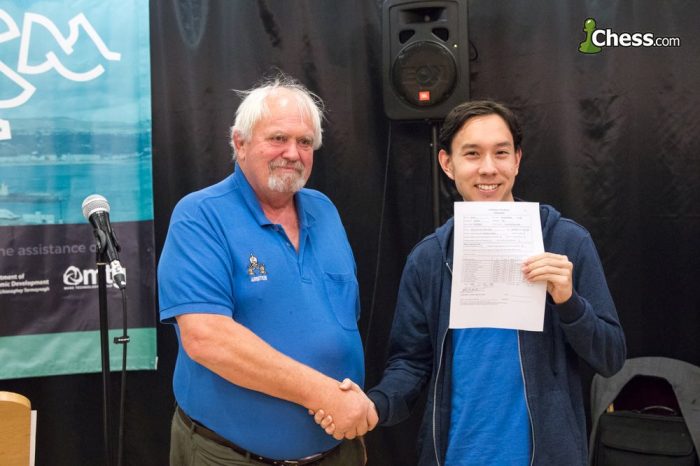 IM Michael Brown receiving his 2nd GM Norm. Photo: Chess.com / Maria Emelianova
While our group did not perform as successfully as we would have liked, it was amazing to see Michael crush it and earn a GM norm! To sum up, the tournament’s conditions overall were simply superb. I can’t remember once as a player being dissatisfied with the tournament hall, the organization, and so on. I’d definitely like to thank Alan Ormsby, Chess.com, the main sponsor Isai Scheinberg, and the rest of the staff who put so much effort into making this tournament truly incredible. I’m very much looking forward to next year already!

Kostya Kavutskiy is a professional chess player, coach, and author currently residing in Mountain View, CA. His first book, Modernized: The Open Sicilian, was published in February 2015. For more of Kostya, check out his official Twitter and Facebook.
SHARE: