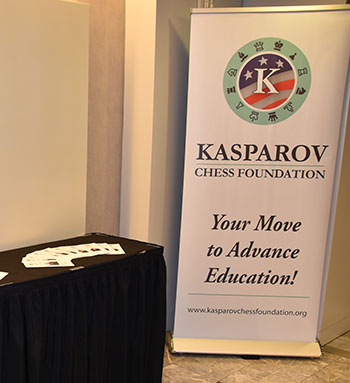 The KCF is about Chess Education above all else 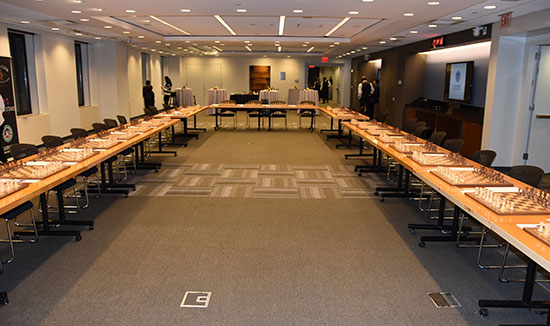 The stage is set for the annual KCF gala – and a special one this year!
It is hard to believe that already thirty years have passed since the historical triumph of Kasparov over Karpov in their 1985 World Championship match. The elegance of Garry’s last game, including one of the most talked about rook maneuvers in any Sicilian, has inspired young players for more than a generation. This week, at the Kasparov Chess Foundation annual gala, we had the opportunity to relive this triumph. 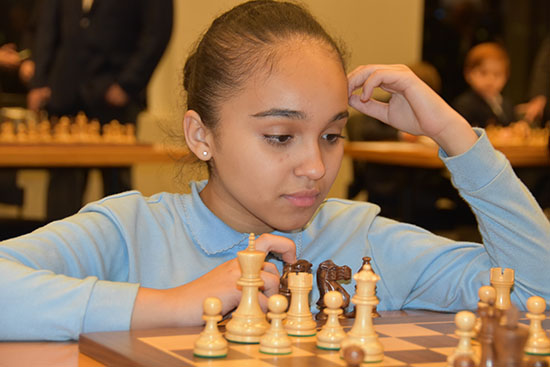 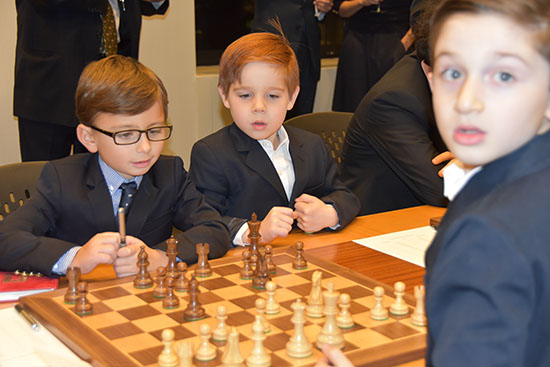 Young challengers warming up for the big game
Held at the heart of Manhattan, a lovely evening brought together celebrities, leaders of the world’s financial industry and philanthropists in celebration of an achievement that shaped chess to its core. The highlight of the gala was a 30-board simultaneous exhibition, which was given by Garry Kasparov himself. After the opening stage was completed, and just as in a celebrity soccer game, Garry brought in three young debutants, passing on the torch to the new generation of chess champions: instead of getting a torch, they took over Garry’s positions on the simul. The three grandmasters come from the very prestigious and successful Young Stars program – a collaboration between the Kasparov Chess Foundation and the Chess Club and Scholastic Center of Saint Louis. 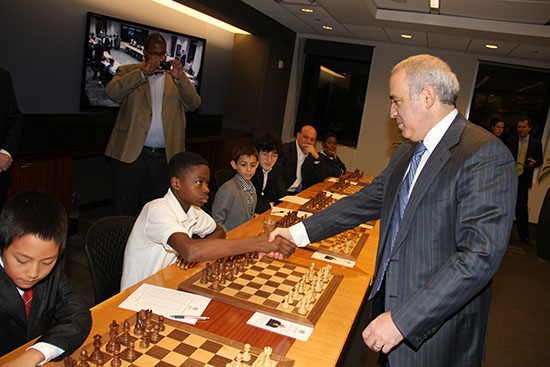 The man himself in action! Here he is greeting before the game a student from KCF’s program at Harlem Children’s Zone.
The three promising players took ten boards each, taking the position where Garry left off. Kayden Troff, former World Champion u-14, had significant challenges on his boards, as more than a couple of masters were in his section, but he was able to dispatch them with sound positional play. 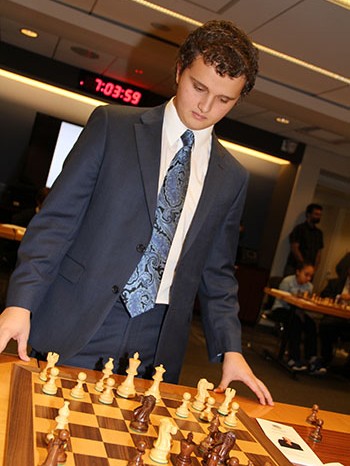 Kayden putting on the finishing touches on his game
Sam Sevian, also a former World Champion but in the u-12 category, took advantage of many of the mistakes that the players had made in the opening against Garry. 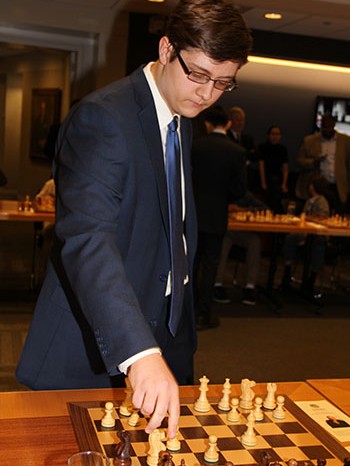 Sam showed he is a ruthless attacker – just like Garry!
Grandmaster Jeffery Xiong, from Texas and silver medalist in the u-10 World Championships back in 2010, was far less patient than his fellow prodigies. He tore apart the competition, and even had time to kibitz on the other two grandmasters while they finished their games. Sam and Jeffery are the highest rated grandmasters under the age of 16 in the World. 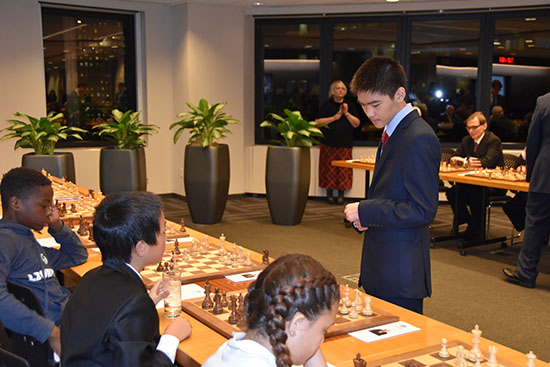 Jeffery was the first one to finish his ten games 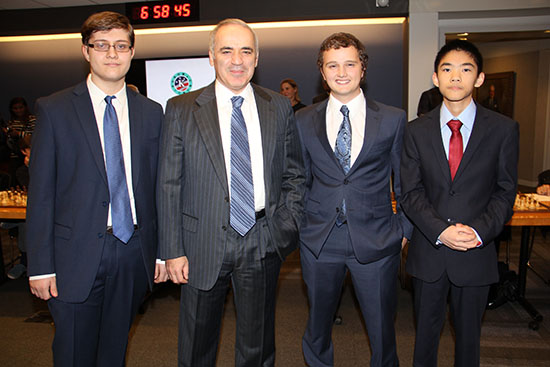 The Young Stars showed their class and finished off what Garry started. Each participant of the simultaneous exhibition received the set they played on with Kasparov’s autograph on the chess board. Memorabilia for life! The final part of the gala was a cozy and intimate dinner on one of the top floors with the stunning view on New York’s landmarks, such as the Chrysler and Empire State buildings. It was attended by Garry’s family, close friends and KCF supporters. Garry showed a video with clips from his match in 1985 and explained his feelings and his preparation, certainly a unique insight on what was going on through his mind thirty years ago, when he became the youngest World Champion in history – a record not broken yet. 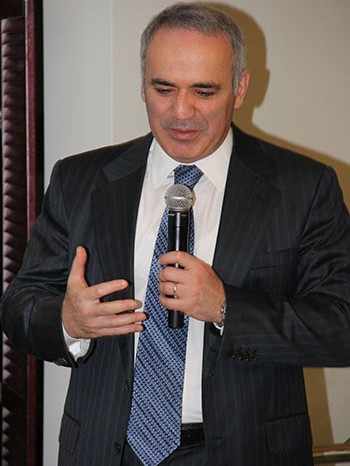 Garry’s emotional words truly moved us, like a time machine, to that match back in 1985 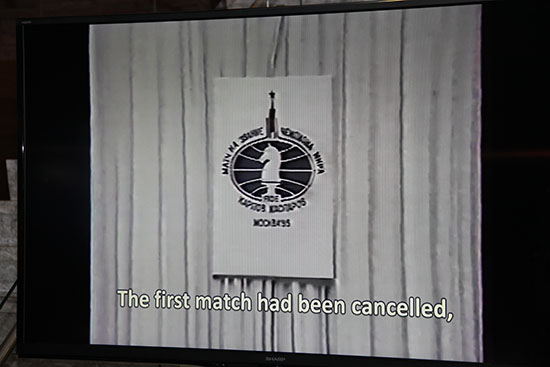 The banner from the 1985 match 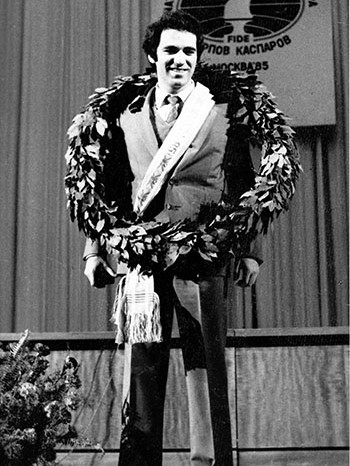 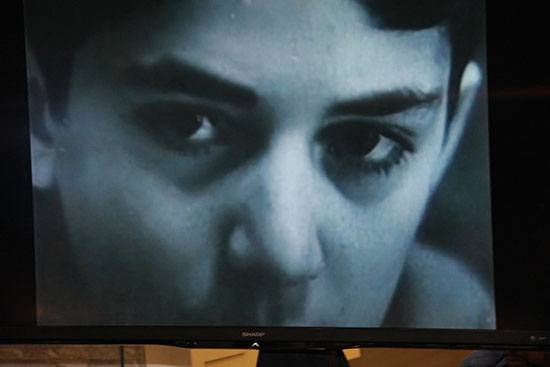 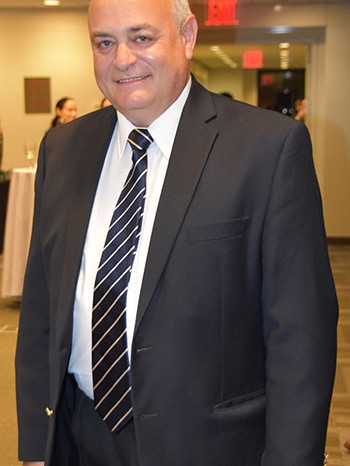 Another first-class event in Manhattan organized by KCF’s President, Michael Khodarkovsky
It was truly an honor and a pleasure to have taken part in such a special event. I consider myself very lucky, for it is rather ironic that this touching celebration for an iconic figure like Garry Kasparov, who brought so much pride and glory to Soviet and Russian Chess, took place in New York, and not in Moscow! Photo credits to Derick Bryant, Daryl Stith and Garry Kasparov’s archive.
SHARE: