Tim Just is a National Tournament Director, FIDE National Arbiter, and editor of the 5th & 6th edition of the US Chess Rulebook. He is also the author of My Opponent is Eating a Doughnut & Just Law, which are both available from US Chess Sales and Amazon/Kindle. Tim is also a member of the US Chess Rules Committee and his new column exclusive to US Chess, “Just the Rules” will help clarify potentially confusing regulations. There is a crowd gathered around an exciting contest. The position looks double edged. Both players are desperately trying to gain an advantage. Both their clocks are approaching those goose eggs—that dreaded row of zeros that says they have no time left to play the game. But then it happens: One of the observers yells out, “Flag!” Now we have a mess.

Only players may make the call if there is a flag fall.

What happens when your opponent runs out of time? You get to claim a win if you still have time left on your own clock. But only you get to claim the win, no one else: not even a TD, parent, friend, relative, or coach gets to make that call. That’s right, no one but you! 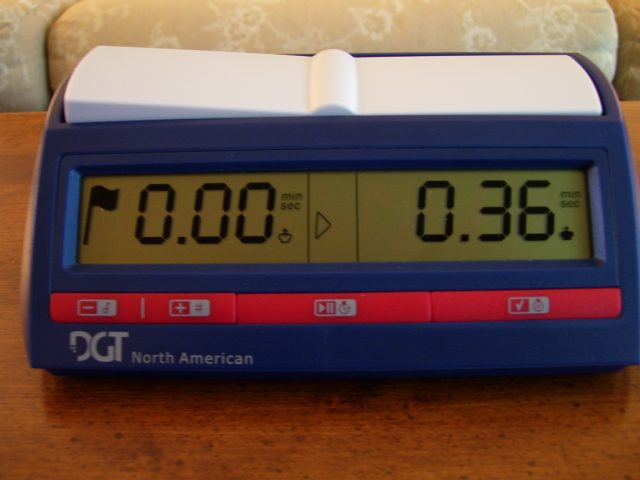 Flag fall (0:00) on digital clock set for one time control
Spectators have no rights in a chess tournament. If a player’s friend or coach or family makes that call for them that gives them an unfair advantage over all the other players, including their opponent, at the tournament. In this example had the bystander not made that call then perhaps the flags of both players would have fallen, and the game would be a draw—in the last, or only, time control when both flags are down without a claim of a flag fall then the game is a draw. The “what ifs” are mind-boggling. Now the result of the game is up in the air, with the TD expected to make an equitable decision. Perhaps the TD will allow the flag claim to stand while ejecting the bystander from the tournament room—or the entire tournament. Perhaps the TD will call the game a draw. Perhaps the TD will forfeit the player who got help from the audience. Note that with two time controls and a digital clock it becomes problematic to tell if the flag fell or not. Typically a set number of moves must be made in a specified time in the first time control (40/90, d5 for example). To set digital clocks for this time control the user also typically sets the move counter. Sometimes, for a lot of reasons, the move counter gets off kilter. Some clocks add the time for the second time control after the correct number of moves have been made. Some clocks add the time for the second time control only after all of the time (not number of moves) from the first time control has been used up. Knowing how the clock on your game displays the first of two or more time controls helps you know when to make a legitimate game ending claim.

Clock move counters have no place when trying to claim a flag fall case.

The game clock says that 37 moves have been made in 60 minutes. The time control is 40 moves in 60 minutes with a 5 second delay (40/60 d5) for the first time control. During a time scramble, both you and your opponent stopped keeping score (as you are allowed to do in the last five minutes of any time control). Your opponent makes a flag fall claim based on the clock’s move counter. But, without an accurate scoresheet, that claim is denied by the TD. Clock move counters may not be used to make such claims, only scoresheets can be used for this claim. Sometimes clocks are set or reset wrong. Sometimes they are started incorrectly. Sometimes they are inaccurate due to players’ pressing the clock too many times or too few times. Move counters just can’t be relied on to be accurate. Next time in part 2 we will finish clearing up the fog surrounding flag falls. Find all of Tim Just's US Chess columns on his author page.
SHARE: