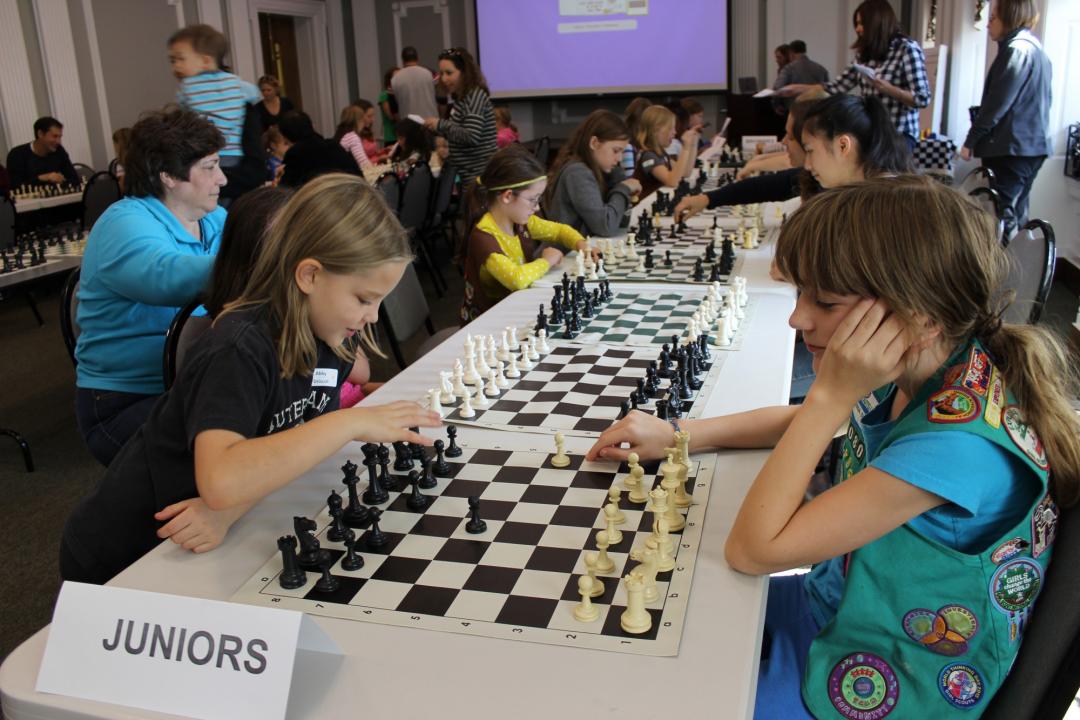 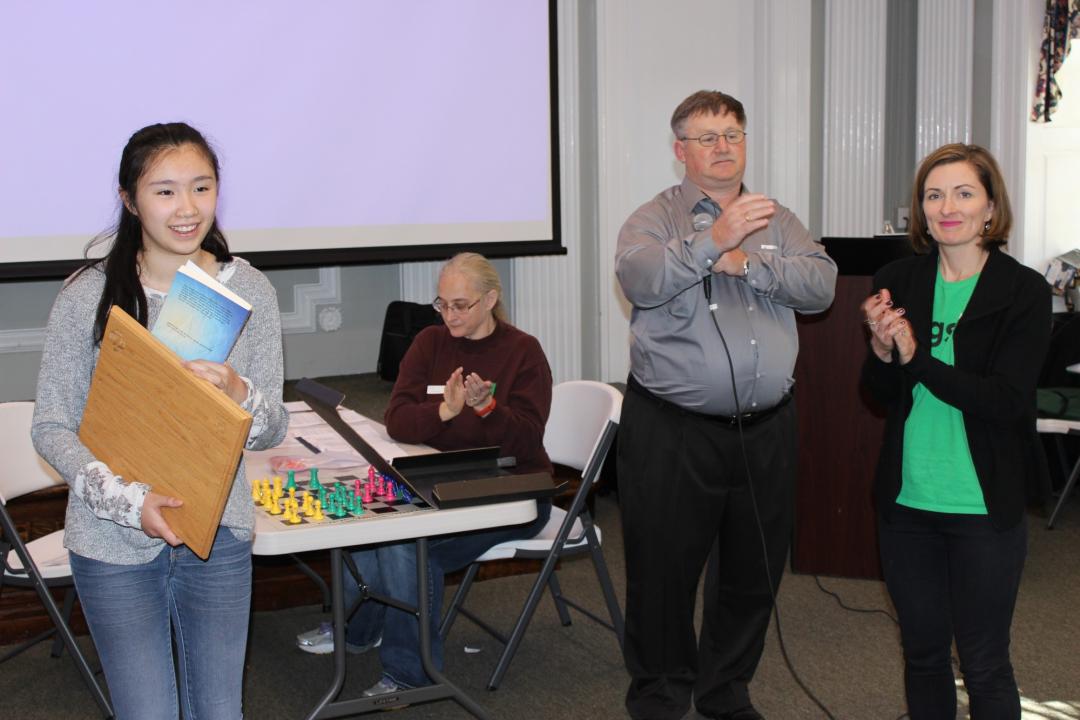 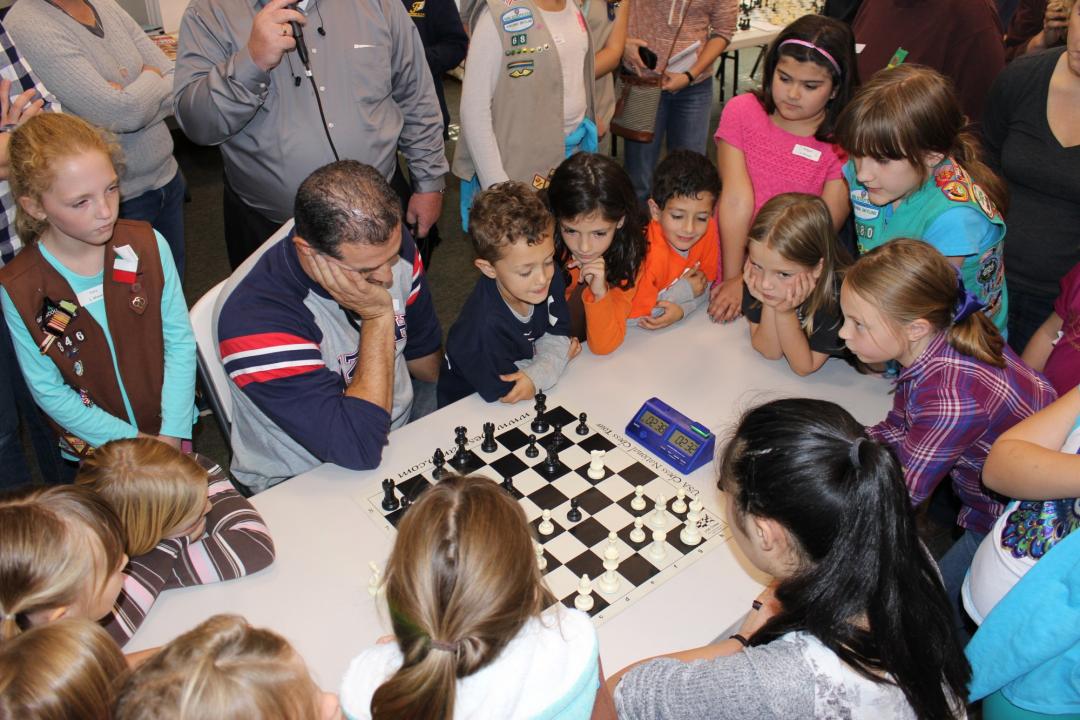 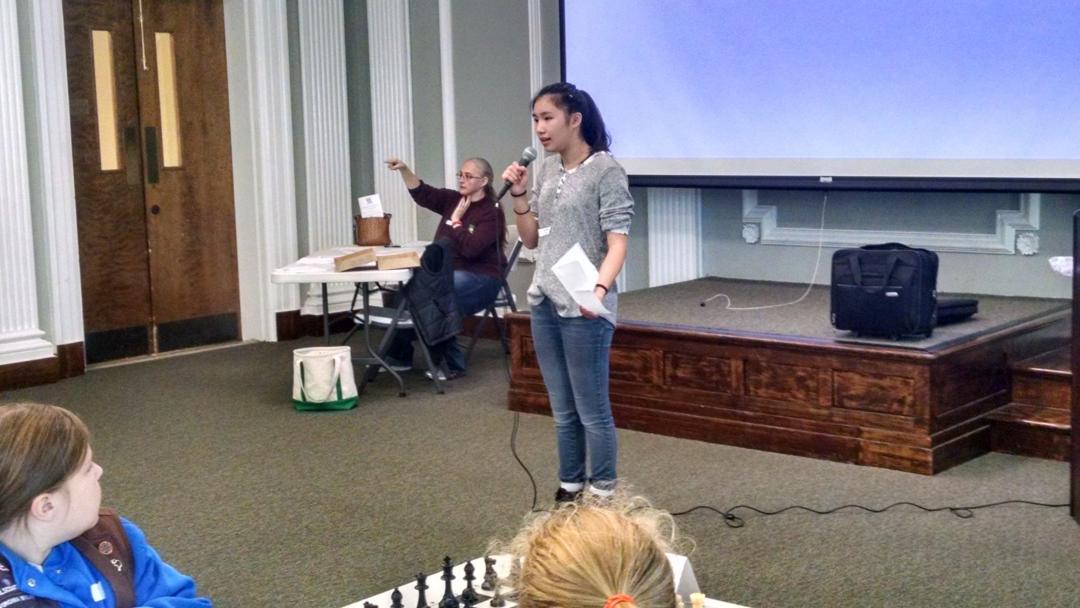 More than 50 girls and leaders from around the Girl Scouts of Virginia Skyline Virginia Council (GSVSC) gathered in Charlottesville, Virginia on 17 October, 2015 to listen to and play chess with 13-year-old  Woman’s FIDE Master Jennifer Yu.  Jennifer is the newest 2015 Virginia State Open Chess Champion and was the first American female in 27 years to take home a Gold Medal at the 2014 K-12 World Championships in Durban, South Africa. Jennifer spoke to the girls about chess impacted her life in many positive ways.  She spoke about the courage and discipline it takes to know when you make a mistake on the board and how to overcome those mistakes to become a better player and better person. The girls asked her questions like: What is your favorite piece? Jennifer said she did not have a favorite piece andthat you have to learn how each pieces works in harmony with the other pieces for success. Where did you first learn to play chess?  “I learned in my school’s chess club in California, but did not really get more serious until my family moved to Virginia.” Girls Scouts: Daisies, Brownies, Juniors, Cadettes,  Seniors, and leaders learned the basics of the game, including the rules and how the pieces moved along with a pamphlet of National Master Bruce Pandolfini’s Commandments of Chess to help them get started on their own chess journey.  Many adult basic players were present to help the girls play what would be their first games of chess!  The girls gathered around Jennifer and a local Expert blitz player Rob Masri. They played a blitz, demonstrating to the girls the level of focus and precision needed to play this intense version of chess. Each girl also received a key chain chess piece token and a participation certificate presented jointly by the Girl Scouts and Playing ACES CHESS.  Through a gracious donation by the Internet Chess Club, every girl received a 6-9 month FREE membership in order to have a safe place to play chess in virtual space. Nate is also working with ICC to create a 1st ever series of virtual chess events for area Boy and Girl Scouts.  He hopes to kick this off in February/March 2016. GM Jesse Kraai, who lives in the Bay Area, also provided signed copies of his book Lisa that five girls received from winning ticket numbers drawn by Jennifer. One Senior Girl Scout is quoted saying: “I thought it was so nice to see someone so young, my age, who has accomplished so many things already.  Some adults can only dream to do what Jennifer has done for women in chess." Earlier in the week, Mr. Nate, as the kids call him, witnessed this interesting game between two girls at the 08-09 am Sutherland Middle School Chess Club.  Can you find the simple checkmate?   [fen flip=true]r3k2r/p7/bp1bp2p/2p2pp1/N3n2P/1P3K2/P1n2PP1/6NR b kq - 0 1[/fen]

1...Nd2#  or 1...g4#
Nate and others are working hard to show chess as a viable afterschool activity. Greg Dorsey, graduate of the UVA Curry School of Education, now teaches physics at the Chesapeake Bay Governor’s School in a very rural area of Virginia. He is working to bring K-12 chess to an area that has been a “chess dessert”. Mike Callaham, Founder of the Richmond Chess Initiative (RCI) is a Class “A” ranked player and current Secretary of the Virginia Scholastic Chess Association (VSCA).  All three presented on Monday 05 October 2015 at the Virginia Out-of-School Time (VPOST) conference to share how chess can impact youth and how chess can be a grassroots program in any community. Nate and Natalie also presented Jennifer with a signed copy of GM Kraai’s book and a laser engraved wooden plaque with a poem entitled CHESS. This was a small token of appreciation for her and her family traveling on this cool breezy autumn day to speak with these eager girls. Nate Szejniuk, Founder of Playing ACES CHESS is an Eagle Scout / Veteran Scouter and US Navy Veteran. He created his K-12 chess organization to address a need in the community to help kids learn chess, a game he has played for  over 50 years. Playing ACES CHESS works closely with student volunteers from the UVA Curry School of Education, UVA Madison House, UVA Alpha Phi Omega Theta Chapter, UVA Student Chess Club and select members of the Charlottesville City Chess Club in order to conduct after school chess programs and tournament opportunities open to all area young people. 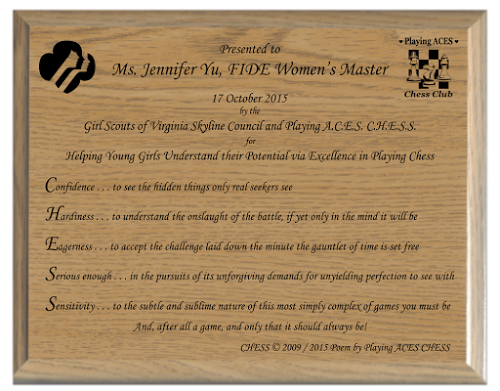