You are driving through the desert at night. Two headlights are all you have to illuminate a small, two-lane road. On each side of you, there is only a faint outline of mountains in the darkness. You can feel the car sway from the force of the evening desert wind. Other cars speed past you like 90 miles per hour is the norm. The road begins to elevate. There’s a break in the blackness, a light in the distance. As you advance through the mountainous roads, the beam grows. Before you know it, the entire desert is illuminated. This is the moment I look forward to on the drive from Los Angeles to Las Vegas: that first sight of the gleaming Vegas casinos and how they flicker even from many miles away.
Believe it or not, Las Vegas often proves to be the ideal location for a chess tournament. The hustle and bustle of the Vegas atmosphere makes it easy to relax in between intense tournament rounds. I’ve always found that I play better in an environment where I’m enjoying myself, and I was refreshingly surprised to find that even strong grandmasters feel the same way. Grandmaster Gata Kamsky has this to say about the locale: “The National Open is always and foremost the fun tournament for me. The party atmosphere makes me relaxed and play better overall. Big thanks to the organizers for creating it in such a way.”

This is the moment I look forward to on the drive from Los Angeles to Las Vegas: that first sight of the gleaming Vegas casinos and how they flicker even from many miles away.

Aleksey Dreev, Photo Tim Hanks
Kamsky tied for first place with along with GM Aleksey Dreev, GM Axel Bachmann, and GM Illia Nyzhnyk. By tiebreaks, Dreev received the coveted Edmondson Cup. In the last round, Dreev and Nyzhnyk ended the game peacefully on board one. Kamsky and Bachmann, on the other hand, each had to win critical games to share first prize.

Gata Kamsky and tournament organizer Alan Losoff, Photo Tim Hanks
Suited for the tournament’s casino surroundings, Bachmann benefitted from taking chances: “I decided to take some risks in the middlegame that ended in the full point. I think my opponent had good chances to hold the position, but it was extremely complicated. I guess that the fact that he was close to time trouble didn’t allow him to find the best defense.”

“The National Open is always and foremost the fun tournament for me." -Gata Kamsky

Contrastingly, Kamsky preferred to play “very solid chess”. His pivotal last round victory was most interesting from the opening aspect: “I used to play the position as black. During the opening, I was trying to remember all of that outdated analysis! Luckily for me, my opponent underestimated my position and blundered, allowing 24. Re6 after which white was much better.”

Beyond the top four, one of the most impressive results of the tournament was by FM Vignesh Panchanatham. At the beginning of the event, Panchanatham’s rating was 2367. Even though he was eligible for the top under 2400 prize, he tied for the top under 2500 prize as well. His performance rating was well above 2600, drawing against one grandmaster and defeating another. 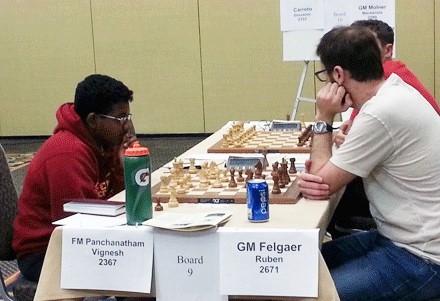 FM Vignesh Panchanatham
Panchanatham attributes his strong performance to his preparation and time management: “[To prepare] for this tournament, I spent a lot of time working through complex positions and critical moments. The point of this was to recognize more patterns and realize when I needed to spend my time.”
In his best game of the tournament, his victory over GM Michael Rohde, this played a significant role: “During my attack, there were many critical moments, and GM Rohde eventually messed up in time pressure, allowing me to win—even a rook down.”

“[To prepare] for this tournament, I spent a lot of time working through complex positions and critical moments." -FM Vignesh Panachanatham

American Chess Icon: Grandmaster Walter Browne
On a more somber note, two days after competing in the National Open, GM Walter Browne passed away in his sleep. GM Browne has been an American chess legend for decades, winning the U.S. Championship six times and winning more open Swiss tournaments than any other American player. He was highly involved with this year’s Las Vegas Chess Festival: playing a 25 board simul, giving lectures, and teaching at the chess camp. He will be missed, but not forgotten.

Vanessa West in Las Vegas, Photo Tim Hanks
As for the finish of my own tournament, I found myself in a critical position in the final round: down two pawns, trying to gain counterplay against the opposing king. Can you find the move I played to save the game?

Daniel He vs. Vanessa West

When visualizing this position a few moves earlier, I was stumped: White threatens checkmate with all checks (Qxf7+ and then Rh1+) . I have no piece that can defend the f7 square except my rook, but 43…Ra7 would doom a key piece to passivity. White's king wouldn’t be under enough pressure, and he could start pushing his passed b-pawn and devising a plan to win. Then, I realized that what matters most is making sure that 44. Qxf7 isn't with check---so that I have time for counterplay. Show Solution
Las Vegas Chess Festival: "The Chess Event of the Year!"
The Las Vegas Chess Festival is an event I’ve been to many times over the years, and I highly recommend it to anyone who hasn’t been. Every aspect of the main tournament and side events are well-run. The organizers pay attention to the details that make competing enjoyable.
Here are a few of the top players' thoughts on the festival as a whole:
GM Bachmann:

“What I like most is the environment. Everyone (tournament staff, players, etc.) is very friendly.”

“The punctual rounds were the best part. Unlike most other tournaments, every round started on time, even the first one of the G/10!”

“I liked everything: the stage, the side events, the usually serious players all in smiles, great music nearby along with casinos going about their business, great arbiters, and, of course, the organizers, Alan and Janelle. You could feel that at this event, they are doing everything to make the players to feel welcomed.”

I’m looking forward to next year’s event. To conclude, here are GM Kamsky’s inspiring words on his future endeavors:

“What’s next for me? The great life of being a chess player: moving from one location to another almost like the flying Dutchman, destined to travel and see new places, meet new and old friends, always looking for a challenge. Life is short; have fun.”