I am IM: Carissa Yip on Earning Her Final Norm at SPICE 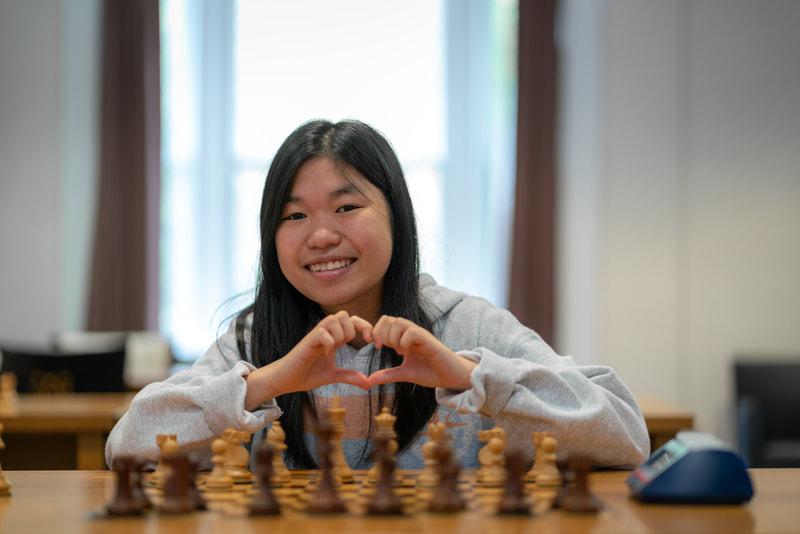 Carissa Yip, Photo IM Rosen
The SPICE Cup is a popular tournament for norm seekers, due to the large number of foreign IMs and GM who typically play. This year's edition was held October 22-27 in Saint Louis, and was also a memorial for Grandmaster and composer Pal Benko, a close friend of GM Susan Polgar.  Historically, I haven’t done very well at tournaments in Saint Louis. Case in point: three US Women Championships, multiple STL Chess Club IM invitationals, and the 2017 US Junior Girls. But, I was ready to change that with this tournament! So first, some background: I’d been in a bit of a slump before this summer. School left little to no time for chess, whether it was self-study or tournaments, and my rating had been around 2400 US Chess (and 2280 FIDE) for a year. However, since my academy let out fairly early (late May), I had around a month to work on chess before the sudden stream of norm events in July and August. And fortunately, my work paid off, with 2500 FIDE+ performances at Washington International and US Masters. Combined with a few other decent tournaments, I entered September with a FIDE rating of 2425 and two IM norms. I was confident that I would get my last norm before the year ended. After all, since I’d crossed 2400 FIDE, that surely meant my strength was IM level, right? But after my wild run of tournaments in the summer, I played terribly at my next two norm events. I even lost to someone a good 200+ points lower rated (and 400 points FIDE), something that hasn’t happened in a few years. Entering SPICE Cup, I obviously still hoped for a norm performance, even though I didn’t exactly expect it. My first round opponent ended up forfeiting, which was a bit of a scare. Thankfully, according to FIDE’s new rules, players are allowed one exception. So yay, a day off. The next few rounds weren’t anything special; I lost to a GM (2611 USCF, 2572 FIDE) beat a lower rated (2223 USCF, 2124 FIDE), then drew another GM (2575 USCF, 2505 FIDE). Round 5 was when my tournament really started to look up, against my friend John Burke (2653 USCF, 2551 FIDE). After my win, I actually wasn’t thinking about my norm yet. One lucky victory doesn’t necessarily mean anything, and I just wanted to keep my mind focused on the next game. 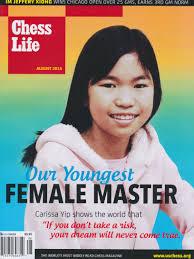 Carissa on the cover of November 2015's Chess Life 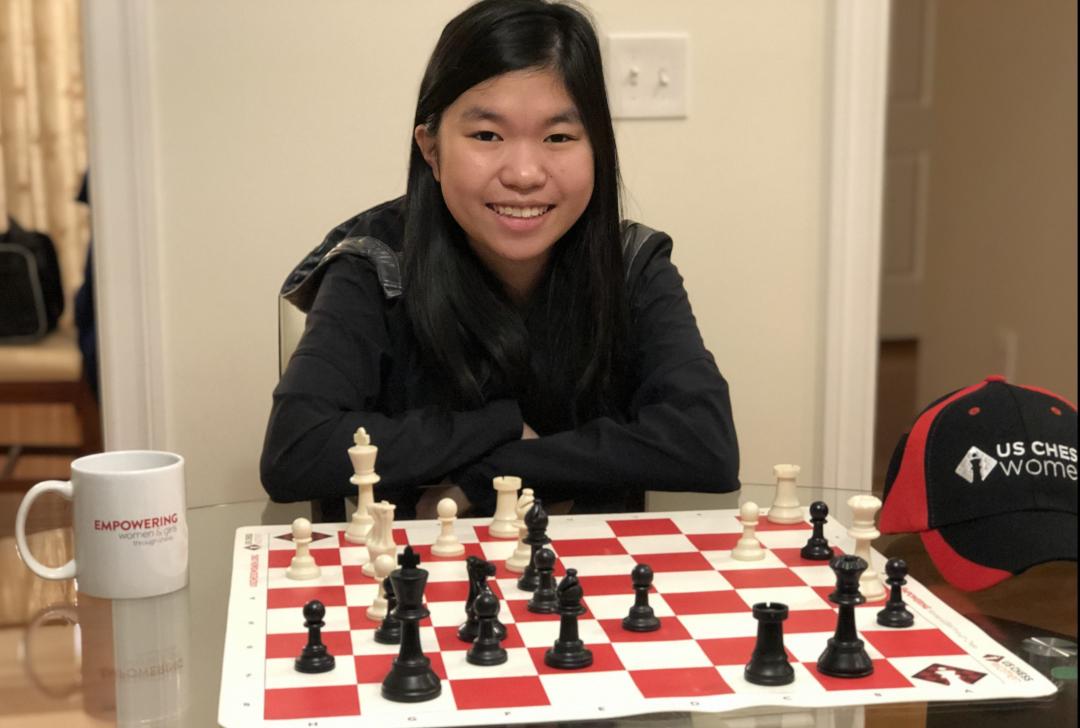 Carissa Yip
Next round, I was paired against Illia Nyhznyk (2764 USCF, 2660 FIDE). Honestly, I was pretty intimidated by Nyzhnyk; I’d followed his chess for a bit and held him in high regard. Nevertheless, I was looking forward to facing him over the board for the first time. After this draw, I was fairly sure that I could norm. I only needed 0.5/3 against an average of 2500 FIDE, and I was slated to play a 2540 next round. But I forgot one of the most important rules of chess tournaments: Always get at least 8 hours of sleep. Prepping until nearly 3 AM, I only got around 5 hours of sleep. Which is actually a decent amount for an average day (no sleep gang where you at!); however, it’s terrible for tournaments. I could feel the quality of my play dipping, and lost my next two games horribly. Though I was feeling upset after the two losses, I reminded myself: it isn’t over until it’s over. Yes, it’s totally cliche, but it’s also totally true. There was still one game left, and I needed to win against Rubens Cezila Jr (2320 USCF, 2163 FIDE) for the norm. And I did it! Congratulations also to Saint Louis local Grandmaster Akshat Chandra, who won the event in clear first with 6.5/9. 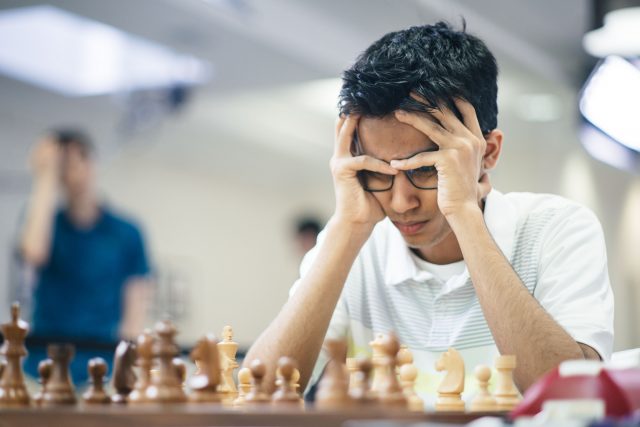 Photo: Austin Fuller
It’s always a bittersweet feeling when you end a chapter of your life, and the IM title was my main goal for the past two years. Hopefully FIDE will approve it in the December Congress, and going into 2020, I can start a new chapter for the GM norm hunt. Since this is my most important accomplishment to date, I’d like to give a huge shoutout to everyone who’s helped me on this journey. To all my coaches, friends, supporters- thank you. And to my parents- this one’s for you both. Follow Carissa on her twitter page, CarissaChess and find out more abouther on her new wikipedia page.  Find full crosstable and games from the SPICE Cup on TWIC.
SHARE:

One thing that could be added to Carissa Yip's Wikipedia page is that she became the first female ever to become champion of the Boylston Chess Club, the oldest chess club in Massachusetts, which was established in 1919 in Boston and is now situated in Cambridge, Mass. She won the championship in 2016. Two years earlier - at the age of 10 - she posted a perfect score of 7-0 to win the championship of the Wachusett Chess Club at Fitchburg State University, the second oldest chess club in the state.
"Chess Chat," the popular TV chess show series seen on Fitchburg Access Television (FATV)in Massachusetts since October 2006, will present on Monday, November 18th, at 7 p.m. its next episode, titled CARISSA YIP TO BE AWARDED INTERNATIONAL MASTER TITLE. The program, produced by the Wachusett Chess Club at Fitchburg State University, will have co-hosts George Mirijanian and chess author Dave Couture present Carissa's 19-move draw - with her annotations and analysis by the co-hosts - in the 13th annual SPICE Cup with GM Illia Nyzhnik, the highest-rated player in the tournament. Co-hosts Mirijanian and Couture will present a complete report on the SPICE Cup and photos of Carissa. The show can be seen via LIVE STREAMING at 7 p.m. on Nov. 18 at www.fatv.org and will also be made available via video on demand on FATV's website.
Very happy for you Carissa!
Congratulations!
Well done!
Congratulations Young Lady.
Just the beginning. Jude Acers / New Orleans