History Made at the Annual CalChess State Championship

The 2017 CalChess State Championship took place over Labor Day Weekend at the Santa Clara Convention Center. In both the main event as well as the scholastic side event, the organizing team reported record numbers. In fact, the projected prize fund was increased by 10% because of the massive amount of entries! Over 300+ players decided to escape the 100+ degree heat and play in the biggest regular tournament in northern California, all competing for a total $22,237 prize fund. The Open section fielded 3 GMs and 4 IMs, playing for the state championship trophy and $2780 first prize. Grandmasters Zviad Izoria and Conrad Holt tied for first in the strong open section (both defeating yours truly in back-to-back rounds), with GM Izoria claiming the trophy on tiebreak. The two drew against each other in the second round, and each only allowed one more draw to finish with 5/6. NM Jack Zhu finished clear third with three wins and three draws. IM Vincent McCambridge shared 4th-5th place with NM Hunter Klotz-Burwell, who came out of semi-retirement after not playing for a year due to his first year in college at UCSB. Eight players scored 3.5, tying for 6th through 13th place, including GM Enrico Sevillano, IM Vignesh Panchanatham (author), and other IMs, NMs and strong players. One of them was a new player in the area, Ezra Chambers, who clearly demonstrated he belongs in the open section. He recently moved back from Israel to the Bay Area and had his old USCF rating adjusted to his FIDE rating, placing him in the 2200+ rating range. Annotated below is IM Panchanatham’s (author) defeat at the hands of GM Izoria, as well as NM Ivan Ke’s draw with GM Sevillano. 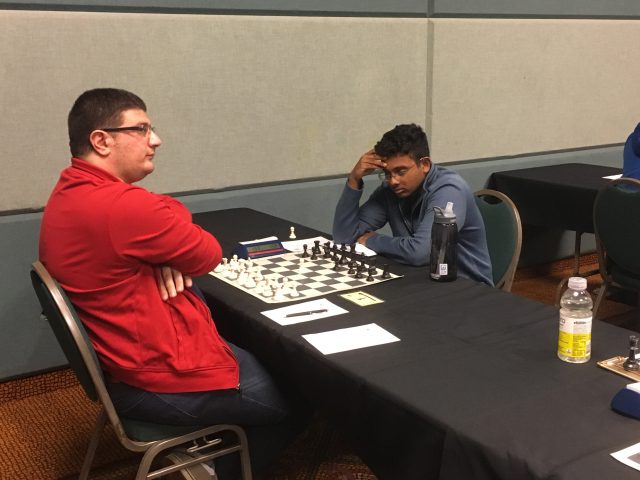 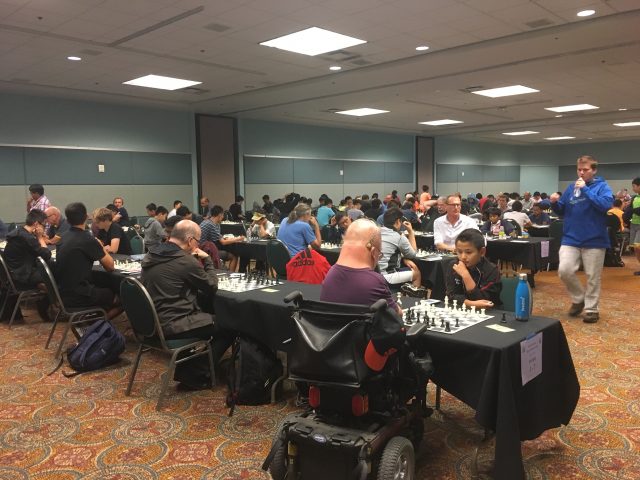 Master, Expert and Section A playing in the Great America I-II-III rooms in the Santa Clara Convention Center 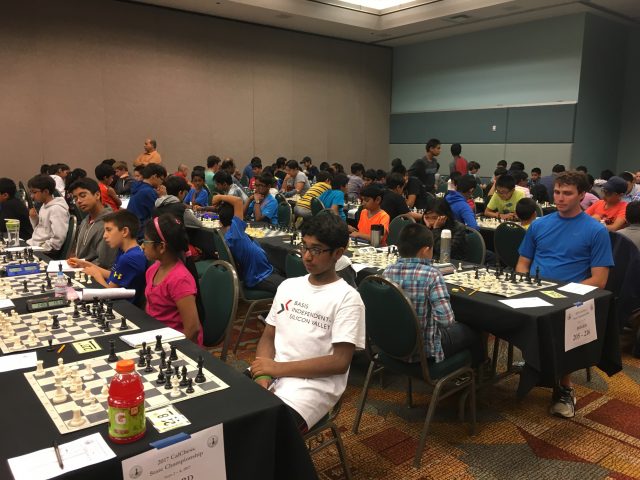 Master, Expert and Section A playing in the Great America I-II-III rooms in the Santa Clara Convention Center
In the FIDE-rated expert section, there was a massive five-way tie for first with 5.0 points. Kireet Panuganti, William Saephanh, Yuan Wang, Sijing Wu, and Milind Maiti split the prize money, though Wu won the trophy on tiebreaks. Shreyas Nayak and Anthony Faulks shared first in the A section, and Faulks came away with the trophy. Guerrer Silvestre won clear first in the B section. Min Zhu also won clear first in the C section. Antonio Cortes secured first place in the DE and under section. 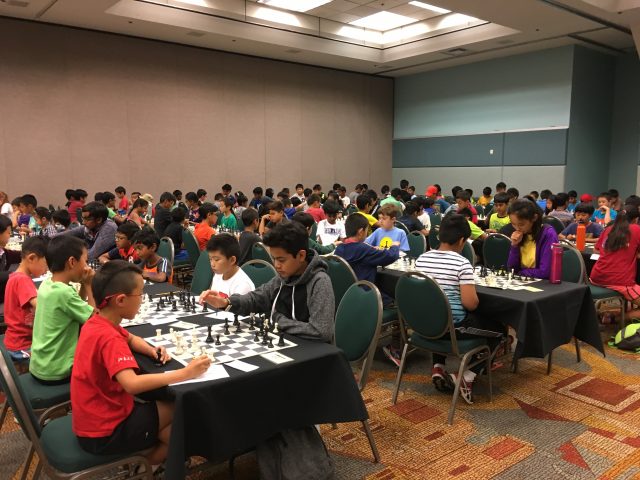 The scholastic side event with 220 participants. 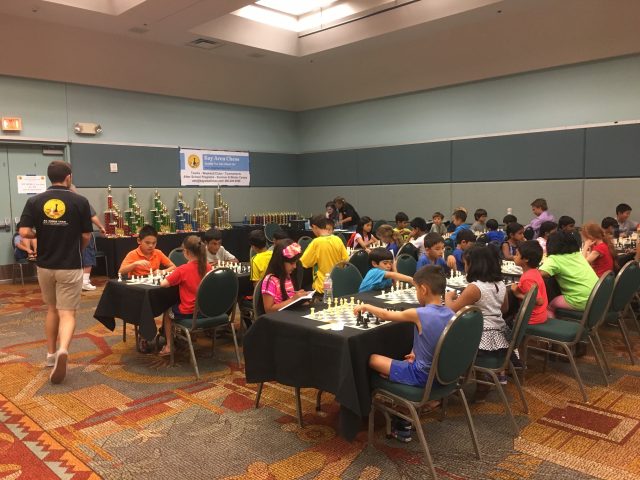 The Scholastic side event was also a great success: 220 excited players competed, and BayAreaChess awarded over 100+ trophies to players with winning records. It was amazing to see so many eager players ready to play and compete at the first tournament of the new school year. The number of school teams clearly showed a lot of potential for the upcoming school year in preparation for the state championships in December, 2017 and April, 2018. Tournament results can be viewed here: The next upcoming tournaments are the US National G/30 and G/60 Championships that are held also at the Santa Clara Convention Center. Come, and grab the National Champion title and have fun over the weekend of September 23-24, 2017. The tournament was organized by 2017 Organizer of the Year and BayAreachess Executive Director, Dr. Judit Sztaray, and directed by Chief TDs, NTDs John McCumiskey, STD Richard Koepcke, NTD Thomas Langland, and STD Jordan Langland. To find out more information about all upcoming Bay Area Chess events, visit www.bayareachess.com or email ask@bayareachess.com.
SHARE: