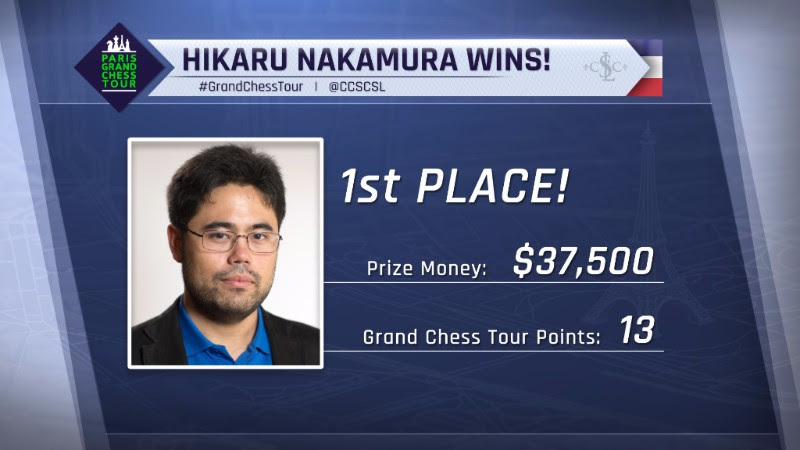 The final day of the Paris leg of the Grand Chess Tour started with big tension as Hikaru Nakamura was only half a point ahead of Magnus Carlsen. The suspense was building up around the last around, when the two blitz players were supposed to battle it out. It was almost assumed that the very last game would decide the winner, but in reality the dust settled two rounds before. Carlsen, in his own words, had a “good old fashioned meltdown” and wasn’t able to keep up with Nakamura, who showed off his superior blitz skills and stellar nerves throughout the day. After 7 rounds, Carlsen fell 2.5 points behind and could no longer catch Nakamura. The American fans were happy to see their countryman emerge victorious after such a tight race. Nakamura took clear first both in the rapid and the blitz, earning $37,500 for his efforts and 13 Grand Chess Tour points. Big congratulations are in order for the winner for his remarkable performance. 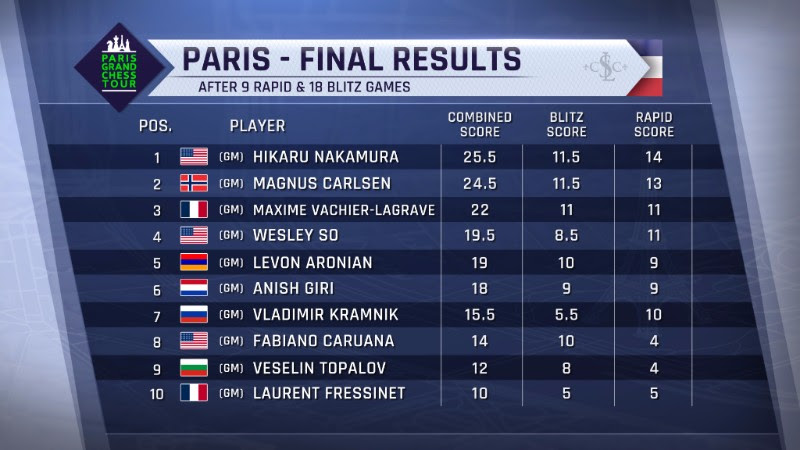 In the very first game, Nakamura drew against Caruana, while Carlsen caught up with the leader by beating Wesley So with a very pretty sacrifice. In the next time, Caruana continued his road to recovery by beating Carlsen in a convincing manner. Nakamura followed suit by losing his to Vachier-Lagrave, who was in solid third place but not close enough to catch either player. As usual, the Parisian got received an applause from the audience for his efforts.  The leaders kept pace in the third game as well as they both drew their games. There were still 6 games left, but it was becoming more and more clear that it was not Carlsen’s best day as he was just getting by, whereas Nakamura’s games were more solid. Tides turned in round 4 when Carlsen was outplayed by Aronian and Kramnik walked into a mating net against Carlsen. This gave Nakamura a full point lead. Carlsen managed to stay on Nakamura’s heels for one more round, until Carlsen lost yet again, giving Nakamura 1.5 point lead. The world champion’s dreams were crushed in game 7, as the pressure of winning became too overwhelming and he lost his 4th game of the day. Nakamura clinched first by beating the lowest rated see Laurent Fressinet. The tournament continued as the rest of the field battled it out for prize money and Grand Chess Tour points. In the last round, Nakamura had to face his longtime nemesis, Carlsen. The Paris Grand Chess Tour winner allowed the world champion’s knight jump round enough to create a mating net. It seems that even after a dominating win in Paris, the Carlsen curse remains for Nakamura. In a postgame interview, Carlsen seemed to be content about his second place after a shaky play in day 4. He explained that in a classical tournament one bad day can only cost one point, but in a blitz or rapid tournament one bad day means throwing all the points out of the window. He also joked that beating Nakamura made it seem as if it was a close race and gave him “whining rights” – a reason to complain about his first round fiasco against Wesley So and other mishaps. In all fairness, he was also on the received end of lucky breaks as he was much worse against So in their second game and completely lost against Fressinet, whom he somehow beat. Nakamura was able to shake off his last round quickly and laughed it off by admitting that it’s better to make a big mistake in a bad position and lose quickly rather than suffer for hours and achieve the same result. The other most notable finish of the tournament was Vachier-Lagrave’s 3rd place finish, 2.5 points ahead of Wesley So who finished 4th. Wesley So is still not very experienced at the very top level, so this was a great confident booster for him. There were very few changes in the rest of the standings, the most shocking one being Vladimir Kramnik’s complete collapse in the second half of the blitz. The former world champion scored only one point, with 2 draws and 7 losses. Fabiano Caruana had a decent showing, scoring 4.5 points out of 9. In a postgame interview he joked that his goal is to move up one rank in the standings, a goal he, unfortunately did not achieve. 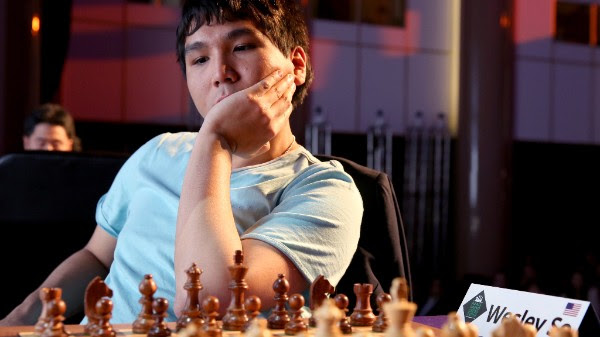 The players seemed to be in good spirits at the closing ceremony, smiling and waving to the crowd as they received a warm applause from the audience. The winner was all smiles as he received a trophy in addition to the prize money. The players will only get a short break as the second leg of the Grand Chess Tour will begin in Leuven on June 17. The timing is perfect as the players will be warmed up but also well rested. Former five-time world champion and an excellent rapid player Viswanathan Anand will be joining the field. Chess fans around the world will be waiting in anticipation to see if Nakamura and Carlsen will continue their dominance and how Anand’s participation will affect the standings. 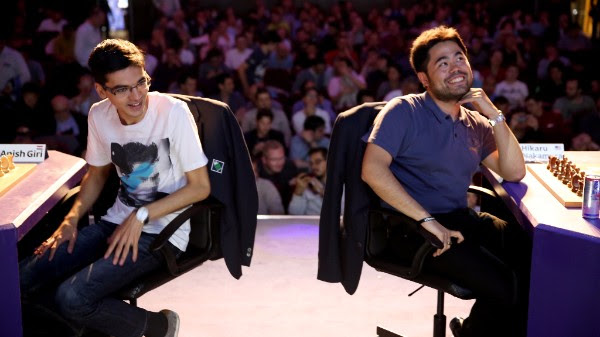 More information is available on grandchesstour.org. The next leg of the Grand Chess Tour in Brussels begins on 6/17/16.
SHARE: