In chess’s romantic period, strong players would only move a piece if an opponent could raise enough cash to make it worth their while. In the modern era, top players were funded by governments, clubs, wealthy benefactors, or a combination thereof, with a political, personal, or professional interest at stake. For a long time, this made sense for a sport like chess, whose traditionally glacial pace of esoteric intellectual gameplay wasn’t exactly a frenzy of spectacle for prospective sponsors.

Now, the COVID-era chess boom has sparked renewed interest in the pastime, along with an evolution of the game. Chess has gone digital, being streamed hourly to millions and recognized as an esport with an emphasis on faster action, stronger competition, and somehow, even bigger personalities.

Watching pre-internet chess used to be akin to watching pre-televised poker — as James McManus put it, “like observing bears hibernate and smoke.” But with a greater accessibility to the game and its top players through platforms like Twitch and YouTube, and a plethora of social media channels, chess, like poker, is now fun to watch — and the sponsorships show it.

This week, chess’s top streamer, GM Hikaru Nakamura, penned a deal with global esports company, Misfits Gaming Group, that will provide financial support and content creation resources for the five-time U.S. champion and 2022 world champion candidate, who regularly broadcasts on Twitch to more than 1.4 million followers, with another 1.28 million subscribers on YouTube.

This deal comes shortly after the announcement that the grandmaster would be parting ways with his previous esports sponsor, Team SolidMid (TSM). Nakamura signed to TSM for a six-figure deal in 2020 but on June 1, 2022, the partners announced an amicable split, with Nakamura stating it was “time for a change.”

The Misfits partnership also comes on the heels of an announcement on June 8 that the grandmaster signed a management deal with WME, who will represent his business interests worldwide.

Esports is a growing $1.1 billion industry, with predictions to reach up to $1.8 billion this year. The industry itself is comprised of video game designers, hardware and software developers, tournament organizers, esports teams and organizations, and the gamers themselves.

But for Hikaru, using his streaming platforms to popularize chess and inspire new and returning players is his main reward. In his recent interview with Chess Life, he said, “For me, having all those people who love the game and [who] want to see chess do well, that is more important to me than anything.” 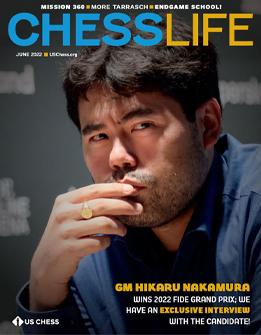