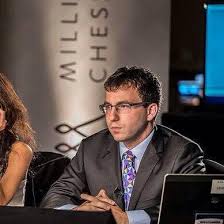 We are all familiar with the famous "Swiss gambit" - taking an early round half point to get easier pairings.  In the 2015 Empire City Open, GM Robert Hess employed the "Birthday Gambit" and won clear first.  GM Hess’ brother had a birthday celebration that conflicted with the last round, so Hess signed up, in advance, for a last round half point bye.  He won his first 5 games and the last round bye clinched the first place prize of $1250.  Hess may have started as the first seed, but he definitely earned his points as he defeated second seeded GM Alex Fishbein and 3rd seeded GM Sergey Kudrin. Here is his 4th round win over Kudrin: Fishbein scored 5-1 and shared second with IM Alex Ostrovskiy (who lost only to Kudrin).  Kudrin and Levy Rozman each scored 4 1/2 to tie for 4th-5th. In the Under 2200 section, 5 1/2 points was also the winning score, but there was a two way tie between Wesley Wang and Daniel Feng who each won $750.   Wang had to come from behind as he defeated Dan Rade in the last round.  Rade tied for 3rd with Mardon Yakobov. The Under 1900 section also saw co-champions with 5 1/2 points.  Joaquin Bustillo employed the re-entry gambit, drawing and losing in the three day schedule before re-entering the 2 day schedule and scoring 5-0 and drawing in the last round.  Spencer Martin essayed the half-point bye gambit signing up for a bye in round 1 and then winning all 5 games. The Under 1600 section also had the familiar score of 5 1/2.  Wenceslao Lara Castillo stood all alone at the end of the tournament and earned $800. Also scoring 5 1/2 for clear first place was Tam Phung in the Under 1300 section.  His victory was worth $500. The only perfect score for all 6 rounds was Jaimeel Adams in the Under 1000 section.  He won $200 for his 6-0 score. The blitz tournament drew 23 players and was won by IM Yury Lapshun and Brandon Jac[ob]son.  Each won $86.50. The first mixed doubles team was Ella Papanek and Gennadiy Reznikov with a combined score of 9 1/2 points to win $300 each. This year's tournament drew 353 players which equaled the 2013 total, but was far ahead of last year's 289.  The tournament was directed by Steve Immitt assisted by Sophia Rohde, Harold Stenzel and Jabari McGreen. The complete details of the tournament are at www.empirecityopen.com.  Archives of most CCA tournaments are at www.chesstour.com/cross.html. Look for more holiday tournament reports coming soon to US Chess, including Randy Hough on the North American and Jamaal Abdul-Alim on the Eastern Open. See Al Lawrence's piece on the Pan-American Championships here.
SHARE: