My first scholastic national was the 2013 Super Nationals, only 3 months and 28 days after my first rated US Chess tournament. I remember entering the famous Gaylord hotel with excitement, anxiety, and most importantly a powerful motivation to win. After walking past the lobby, I was in awe of the massive dome that housed a mini water park, a river with boat tours, an amazing ice cream shop, and thousands of chess players. I think I remember the tournament so fondly because I made friendships that I still have. My rating was 1486 at the time, and I only scored 4/7. I distinctly remember seeing all of the top players like Luke Harmon Velotti, Tanuj Vasedeva, and Atulya Shetty fighting it out on the stage. I have always been a single-minded person. I competed in cycling in the Netherlands and was one of the top cyclists in the nation for my age when I moved back to California, so my competitive spirit has always been what motivates me in everything, That spirit was re-ignited when I realized that if I dedicated everything to chess, I could be up on that stage holding that 1st place trophy. Four years later, I returned to the Gaylord Hotel for the 2017 Super Nationals with a rating of 2412 and the exact same competitive spirit. But this time, things were different. I was the top seed, playing on the DGT boards with my games broadcasted, and everyone wanted me to beat me. I drew against Alexander Costello in Round 5 and had to win my final game against Christopher Shen to win the tournament. Some might think that all that pressure would negatively affect me, but I found it invigorating. I won an extremely long game that lasted over 100 moves to take the 8th Grade title, but I was not satisfied. I realized that in order for me to be truly satisfied with my performance, I would need to go perfect. I would need to win the bughouse, blitz, and classical without a single blemish. In the 2018 Grade Nationals I won all three events, but I was a co-champion for the classical and bughouse. Still it wasn’t enough. Something about my drive changed. I transferred to Columbia Grammar and Preparatory School for my Junior and Senior Year of High School. Columbia Prep has a rich chess culture that started with GM Marc Arnold and has been fostered and developed by International Arbiter Sophia Rohde. This was the first time that I went to Nationals and wasn’t focused on my individual results, roomed with a teammate, and had a team room where my teammates and I would analyze each others’ games. I realized that I had something to play for that was bigger than myself. 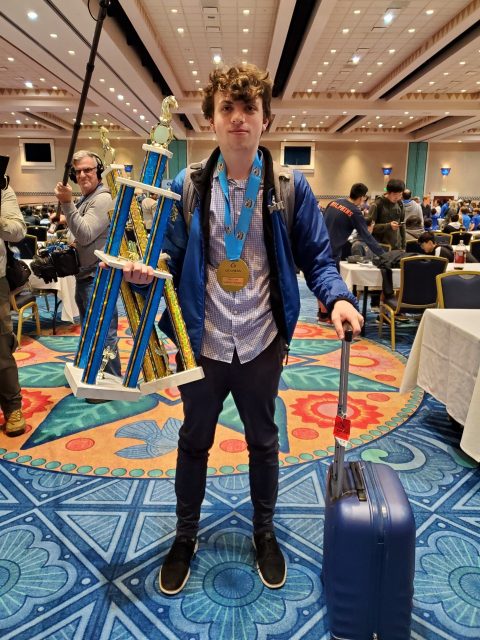 The K-12 Blitz Team Championship was a three horse race between Columbia Prep, Stuyvesant High School, and Dalton. I ended up going 12-0, scored crucial victories against Justin Chen of Stuyvesant in the penultimate round and against Gus Huston of Dalton in the final round. We were tied with Dalton for the lead heading into the final round with one player with 7/10 and a few players at 6/10. Unfortunately we had a tough last round and lost to Dalton by a half-point. Honestly, I didn’t care about my individual title. I really wanted us to win as a team, but we failed and I was not satisfied. Vincent Baker and I won the bughouse earlier in the day with a perfect 10-0 score. Our strategy for the bughouse was to to gain a time advantage so we could stall on one board and “chess” our opponent on the other. This technique was very effective because most of our opponent sacrificed pieces for an attack and then waited for more pieces. This depleted their pieces and lost them time, optimizing our ability to focus one board. With the bughouse and blitz over, I had to focus on finishing my goal of going 29-0 by winning the last seven games in the “Main Event.” After playing three Nationals, I have learned was that you should never underestimate anyone. My first four games were pretty smooth wins. My opponent had some chances to draw in round 3, but he had to find a series of very good moves with basically no time. My most important game was the 5th round where I faced the #2 seed, FM Justin Chen, who also had 4/4.

I was a bit lucky to face a 2100 in round 6. I played a KID hybrid, opened up my two bishops with a pawn sacrifice, and eventually won a nice game where my pieces coordinated beautifully. And then it all came down to my final game, where I faced my bughouse partner Vincent Baker.
SHARE: