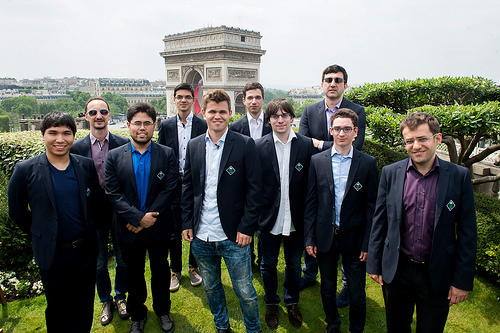 Try out tactical puzzles from the debut tournaments for the 2016 Grand Chess Tour!

The first stage of the Grand Chess Tour in Paris was mostly a race to score points between Hikaru Nakamura and Magnus Carlsen. Although Carlsen defeated Nakamura twice in head-to-head games in the blitz segment of the event, Nakamura ultimately outscored Carlsen and clinched the tournament with two rounds to spare. What tactical combination did Nakamura use in his victory against Anish Giri?

Photo: Your Next Move GCT

The second stage of the Grand Chess Tour in Leuven, Belgium, began with a string of blunders by Kramnik, Anand, and even Carlsen. On day two, however, Carlsen achieved a perfect score, winning all four rapid games. From there, he cruised to victory, winning the overall event with 3 rounds to spare. One of his most impressive games with his victory with black against Maxime Vachier-Lagrave. How did Carlsen herd his connected passed pawns to victory in the following position?