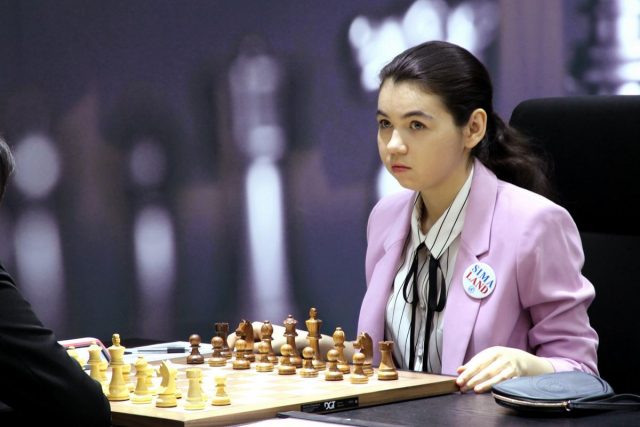 Aleksandra Goryachkina, Photo fide.com
In round four of the Women’s World Championship (Jan 4-26) , reigning champ Ju Wenjun struck first blood, with an instructive victory in a queen endgame. Carissa Yip annotated the victory here. After a rest day, Aleksandra Goryachkina notched a huge comeback with a win in round five. Carissa Yip annotates that dramatic game, as well as a tense round six draw. The match now moves to Vladivostok, Russia, where play will resume on Thursday for rounds 7-12. Find out more about Carissa Yip's recent success in her article on achieving the IM title.  Quick Links Match Website   Full Match Schedule Live on Chess24
SHARE:

Again, Thank you for the analysis IM Yip!
Excellent annotation -- very concrete, yet also well-explained to many levels. I'm becoming a fan of Goryachkina's will to keep the pressure on down to the very end. She's a welcome dose of 'new blood' to women's chess. And... speaking of "new blood," congratulations to you for your invitation to play in next month's Cairns Cup!