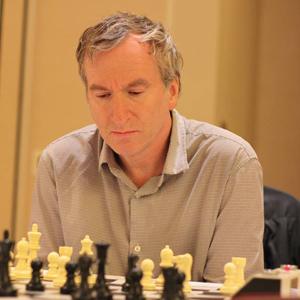 The Schenectady Open is not a major stop on the CCA calendar but it continues the efforts to bring weekend chess to other parts of New York.  The $2000 guaranteed prize fund was good enough to attract 74 players including 1 GM, 1 FM, and 2 WFMs.  GM Michael Rohde was the lone GM and outrated the field by nearly 200 points.  The second seed was FM Boris Privman and there were two other masters as well as some former masters in the 25 player Open section. In this tournament, the final rankings were very close to the original wall chart ranking.  GM Rohde finished in clear first with 4 ½ out of 5 and won $400.  He gave up a draw only to second seeded FM Boris Privman.  He beat NM David Carter, WFM Samadashvili as well as two other experts enroute to his victory.   Here is Rohde’s victory over David Carter.

Second seeded Privman finished in clear second with 4-1 having drawn Rohde and 4th seeded David Carter. Carter finished tied for third with Original Life Master Dale Sharp both with 3 ½. In the Under 1850 section, John Phillips won with 4 ½ out of 5.  Philips won his first four games and then drew round 5 to secure first place.  Phillips entered the last round 1 ½ points ahead of everybody else and finished the tournament 1 point ahead of second place!  The critical game occurred in round three when Philips defeated top seeded frequent CCA competitor Abhinav Chinnambeti rated 1849!  Philips used a nice tactic at the end of the game to simplify the queen ending to a pawn ending or deliver checkmate Chinnambeti finished with 3 ½ and tied for second with Varun Rao who won the Under 1650 prize. The only perfect score of the tournament was in the Under 1450 section where Brendan Polo finished with a perfect score and finished a point ahead of second place.  The Under 1450 section was also the section that determined the mixed doubles prize.  Brother and sister Blaise Loya and Melody Loya each scored 4 points. They tied for second (with Kiho Kwon) wining $73.34 each, but their combined 8 points won the mixed doubles team prize of $100.  It is becoming more and more common that brothers and sisters team up on mixed doubles teams, sometimes with significant success! One interesting note of this tournament is that there was not a single forfeit.  Considering that this was the largest Schenectady Open and noting the relative frequency of forfeits in today’s tournaments, this is significant. NTD Steve Immitt directed the tournament for CCA assisted by William Townsend. The full tournament results are at www.schenectadyopen.com. Previous Continental Chess tournaments can be found at the Continental Chess website at  http://www.chesstour.com/cross.html.
SHARE: