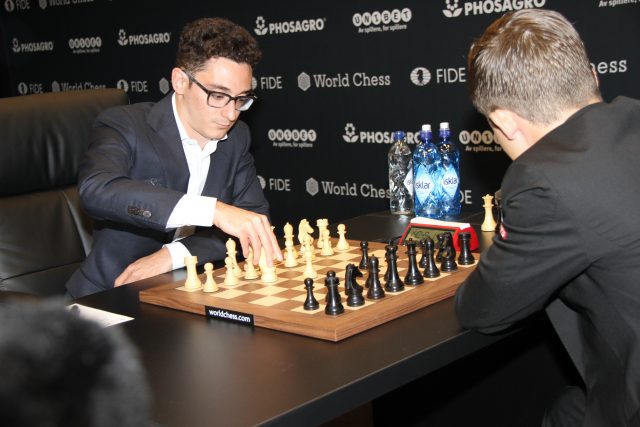 Game one in Caruana-Carlsen, Photo Cathy Rogers
Ian Rogers reports on the vibe of first day of the title match in London Queuing for an hour outside the venue for the World Chess Championship, The College in Holborn, in order to enter to see the first game has both pros and cons. The cons are obvious – London weather – but the pros are not inconsiderable. Firstly the camaraderie built up with others in the queue which, approaching 2 PM, an hour before the game, numbered more than 50 people, journalists and chess fans. Secondly one could watch World Chess supremo Ilya Merenzon sans accreditation being refused entry by a diligent security guard - though after a few phone calls to the right people he was allowed in to the College, out of the cold. In contrast, Woody Harrelson walked straight up to the door, said “I’m making the first move,” and was immediately allowed in by the star-struck guard. Thirdly, and remarkably, there was the number of people who approached the security guard asking about watching the match, only to be told that the first game was sold out and to try online for later games. Once entering The College media and spectators queue again for wristbands which provide entry to most parts of the building: the playing hall, bookshop, commentary room, cafe, playing room and chill room. The commentary room with Judit Polgar and Anna Rudolf is particularly popular, though with seating only for 20 and limited standing room, it is frequently full – especially when Woody Harrelson joins the commentary. 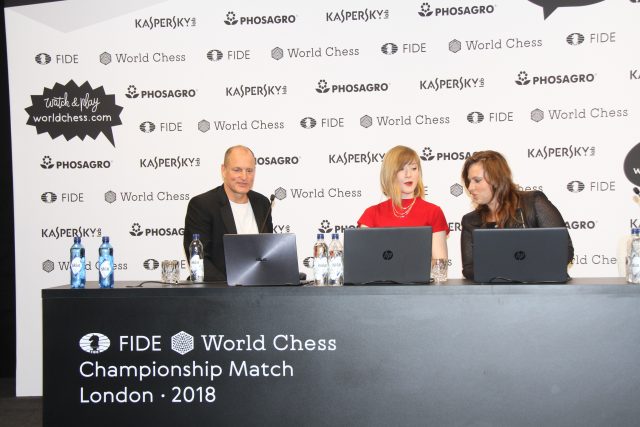 Woody Harrelson with World Chess Championship commentators IM Anna Rudolf and GM Judit Polgar, Photo Cathy Rogers
Upon entry to The College, the media are shocked to learn that World Chess has suddenly cancelled all accreditation for photographers and asked everyone to reapply by email! The 30 quickest to respond will then be allowed into the glass cube for the allotted 5 minutes. Despite a mad panic, in the end it seems every major media organization – including Getty, Reuters, multiple English and Norwegian media representatives plus the chess media - manage to squeeze in. Press officer Daniel King somehow controls and pacifies the media pack so that everyone can capture the fun when Woody Harrelson knocks over Caruana’s king, apparently mishears and makes the wrong first move, and finally keeps Caruana happy by changing his choice to 1.e4!. “Can I play something else?” Caruana plaintively asked the arbiter after seeing 1.d4. “I thought you said 1.d4,” replied Harrelson. (It was a joke, Harrelson said later, surprising both player who probably just thought he was a bumbling celebrity.) 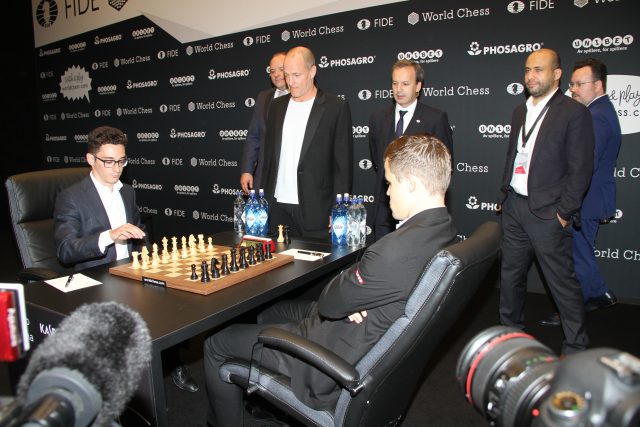 Woody Harrelson makes the first move in Caruana-Carlsen, Photo Cathy Rogers
Once the game was underway the media and spectators dispersed to different parts of The College with fewer than 50 staying in the theater where the game was being played, watching the players in their glass box while sitting on rather spartan bench seating. However the spectator experience in the theater was otherwise superb. The players could be clearly seen in their glass box and above them (outside the box) were three screens, the center one showing the position and the most recent moves while the other two showed close-ups of the players’ faces. This turns out to be the perfect angle to watch the development of the players’ thoughts, much more interesting than showing the players just sitting at a board. It had been understood that a total of roughly 400 VIP and regular tickets were on sale each day but, curiously for a sold-out event, the number of paying spectators seemed to be only half that number. A head count revealed little more than 300 people in the building, of which the 60 press, about half of the 75 beautiful people in the VIP room, as well as the staff, would not have bought tickets. The positive upshot of having only, say, 200 paying spectators instead of 400 as expected, is that what seemed at first like a too-small venue turns out to be perfectly adequate (except for the severely overcrowded media room). For example, a playing arena holding little more than 100 turned out to offer ample space (except in the first 10 minutes when the media invaded). 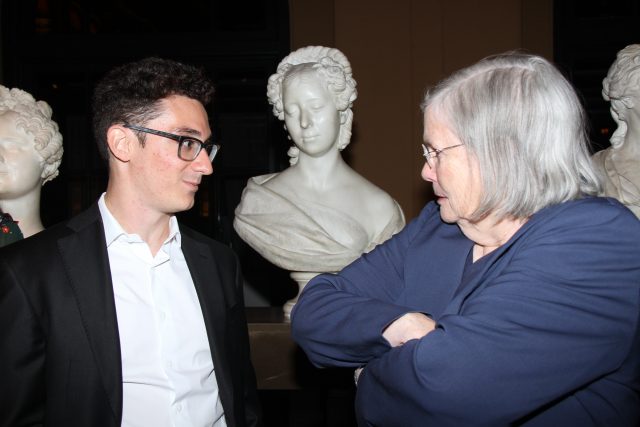 Fabiano with Dr. Jeanne Sinquefield, co-founder of the Saint Louis Chess Club, Photo Cathy Rogers
The crowd generally seemed knowledgeable, though it was notable that more than half left very soon after move 40; evidently English dinner time. Their decision turned out to be quite reasonable, given that Carlsen, having lost his considerable middlegame advantage decided to try to grind down Caruana in a position where many less determined players would have agreed a draw. 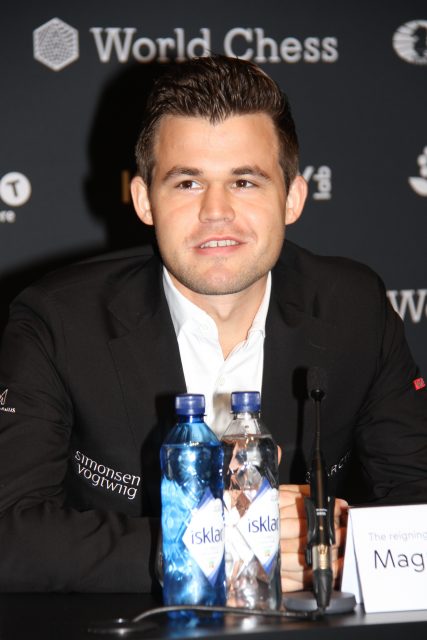 World Champion Magnus Carlsen, Photo Cathy Rogers
It took another 3 hours before the game was over and the players emerged to a surprisingly crowded press conference, with 30 journalists and a handful of hardy spectators. “There were definitely a lot of nerves,” admitted Caruana. “It is a very different feeling playing the first game of a world championship match in front of so many cameras.” Carlsen, who knew that he should have converted his highly favorable position, admitted “I couldn’t quite find the knockout [and] played a bit too cautiously.” A huge save for Caruana who would have faced a massive task had he lost the first game and faced six Black’s from his next 10 games afterwards. “This was not the most pleasant experience to defend this extremely long game with White,” said Caruana. “I am relieved to have escaped." The second game will begin tomorrow, November 10, at 10am AEST. Worldchess.com is the tournament website. The Today in Chess broadcast daily starting at 12 Noon ET  will feature a star-studded schedule of interviews. Full list of viewing options in our Couch Potato guide. Find our media kit and mainstream media round-up here.
SHARE: