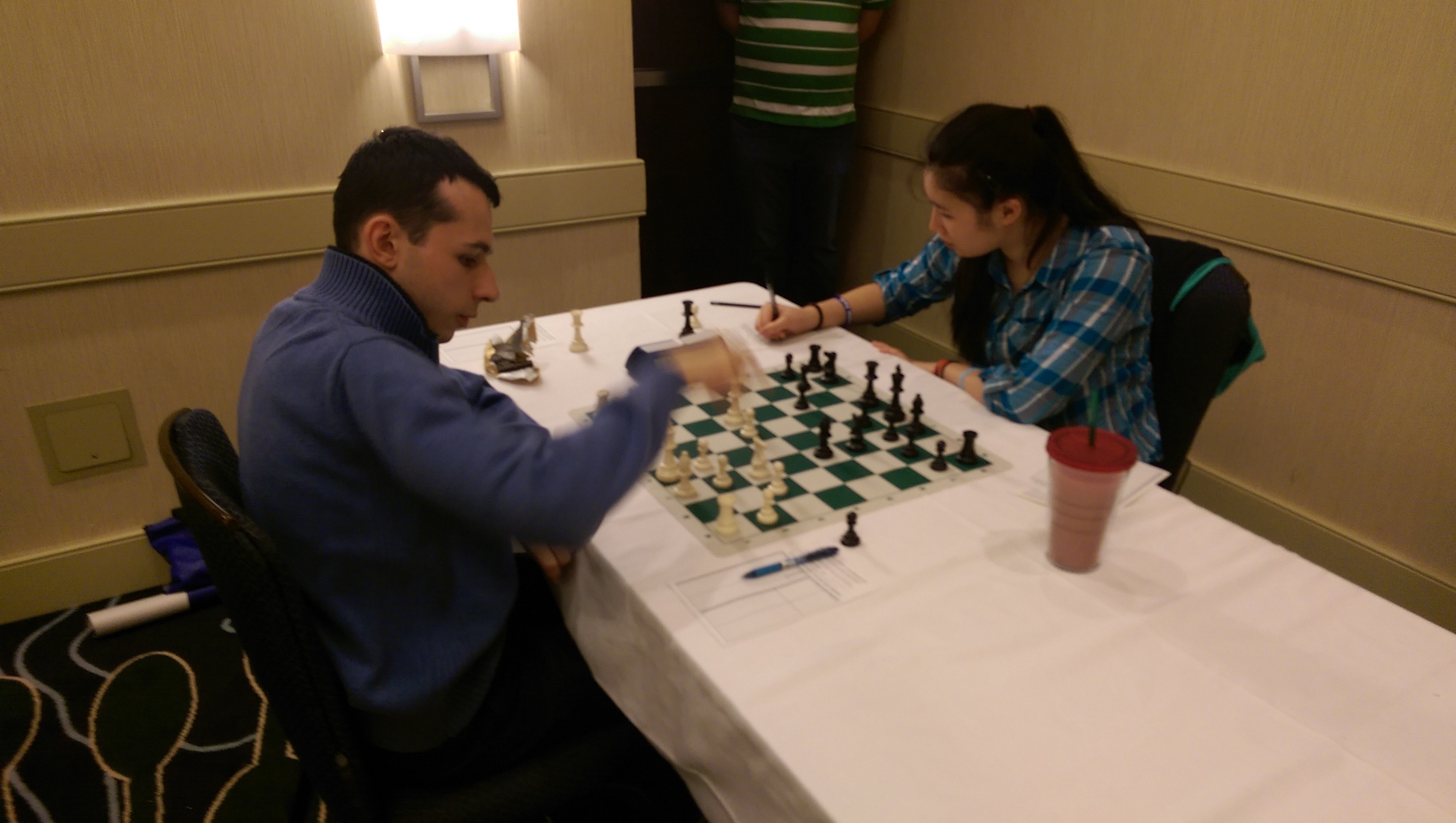 GM Aleksandr Lenderman won the George Washington Open held at the Dulles Airport Hyatt Hotel from February 26th to 28th.  Lenderman scored 4 ½ out of 5 against a very strong field.  Lenderman played the 2nd, 3rd, and 5th seeded players (GM and two IMs) en route to a 2758 performance rating.  His only draw was to IM Igor Khmelnitsky and that was a fighting draw.  Igor offered a draw after the opening and it was declined.  Alex offered a draw about move 40 that was also refused,  but they drew a short while later.  Alex commented that Igor is a very strong player and he played very solidly with white, so it is very difficult to win a game like that.  In round four Alex was ½ point back of second seeded GM Sergey Erenburg.  Their game was a sharp affair with Alex coming out on top. Here Alex shares some of his thoughts on the critical game. This set up an interesting last round pairing. The two leaders were Lenderman and Virginia State Champion , WFM Jennifer Yu who was coming off a 4th round win over GM Akshayraj Kore.  Jennifer had two whites in a row so was a “forced” black.  This gave Lenderman his second white in a row. In the end Jennifer could not upset two GMs in a row and Lenderman came out ahead.  Lenderman won the $1500 first prize and the $100 bonus for finishing in clear first.  Still, Jennifer cannot be too disappointed.  She tied for the Under 2300 prize winning $300 and took home a GM scalp! Second place in the open section was won by Erenburg and NM Aravind Kumar each with 4 points.  Kumar played the Swiss gambit to perfection.  He started with a half point bye.  He was then paired down the remaining four rounds, but scored 3 ½ out of 4 to finish in the second pace tie.  Erenburg’s only loss was to Lenderman.  In the last round he defeats IM Tegshuren Enkhbat to secure his portion of second place. There was a six way tie for 4th to 9th with IM Khmelnitsky, FM Shelby Getz, and NM Maggie Feng taking the place prizes and WFM Yu and NMs Daniel Lowinger & Srdjan Damanovic taking the more valuable Under 2300 prizes. I am always a fan of fighting chess and flashy tactics.  The next game comes from the lower end of the open section.  White thematically sacs a piece in the late opening /early middlegame.  Fritz evaluates the position as equal after the sacrifice is accepted.  For those who like dynamic equality, enjoy the next game! In the same vein, players in the class sections also enjoy tactics.  Can you find the winning move? Mcneil – Knudson White to Play and Mate in 3 Show Solution
1.Rxg6 hxg6 2.Qxg6+ Kh8 3.Qh7#
This tournament marked a resurrection of the George Washington Open.  The event was previously held by the Virginia Chess Federation intermittently from 2000 to 2009.  There were seven George Washington Opens held during those years.  Interestingly, the 6th George Washington Open was the seventh tournament and the 5th George Washington Open was the sixth tournament.  Given that history, I am not going to try to number this year’s event, I will only say that it is good to be back on the schedule again! This year there were a number of perfect scores.  Frequent CCA tournament competitor Jones Murphy won the Under 2100 section with a 5-0 score.  He also partnered with Stepanie Ballom to win the first mixed doubles prize.  Stepanie  herself won the Under 1900 prize.  Murphy’s two prizes added up to a total of $1500 for his weekend’s work matching Lenderman’s first prize (but without the bonus). The Under 1800 section was also won with a 5-0 score.  Mark Hyland started as the 21st seed!  He was paired up 5 straight times.  He played the first seed in round 1 and when the weekend was over it was Mark who was in clear first place.  He won $1200 to go along with the 128 rating points he picked up. The Under 1500 section also saw a 5-0 score emerge from the bottom half of the wallchart.  Jason Zipfel also started at seed #20 and also started by playing the section’s highest rated player.  His 5-0 score was worth $600 (the U1500 section has a lower entry fee) and he picked up nearly 200 rating points! The Under 1200 section did not have a 5-0 score but it did have a player win all his games.  Aashray Manchanda started with a half point bye and won all 4 games enroute to a first place tie and $225.  Because of the bye, the other player in the tie, Cameron Voss won the first place trophy on tiebreak and also got $225. The blitz championship was won by Richard Brown with a score of 7 ½ - ½.  He finished 1 ½ points ahead of second place!  He won $100 and added 100 points to his blitz rating! National Tournament Director (NTD) TD David Hater directed for Continental Chess Association assisted by NTD Brian Yang and Senior TD Andrew Rea. Full details on the tournament, including many games, can be found at www.georgewashingtonopen.com.   Archives of most CCA tournaments are at www.chesstour.com/cross.html.
SHARE: