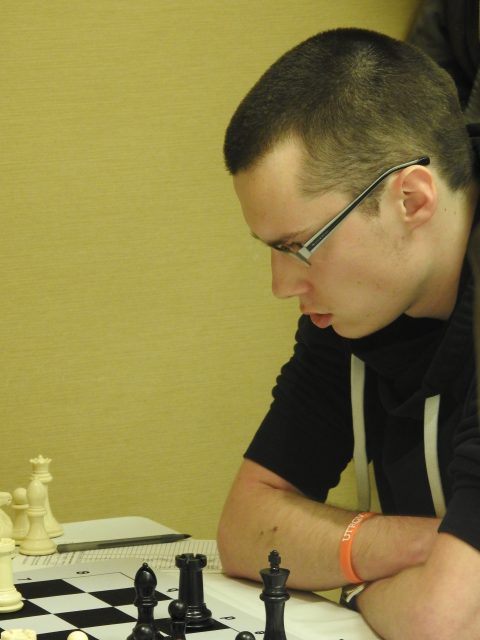 GM Kamil Dragun won the Golden State Open held from January 11-15 in Concord, California.  Dragun started as the top seed and finished clear first with a score of 6-1, though he had to overcome an early round loss to reach the winner’s circle. The tournament drew a total of 302 players (counting re-entries, house players etc.) in five sections.  The Major section had five GMs, three IMs, eight FMs, and a total of 29 players over 2200 among the 78 players, vying for their piece of the $25,000 prize fund.  The top five GMs were all rated near 2700 and finished near the top of the crosstable, but the tournament was not without some upsets. Round one proceeded normally for the GMs, but the one upset on the top boards was sixth seeded IM Luke Harmon-vellotti lost to Kenneth Hills.

While round one may have been routine for the GMs, round two featured two significant upsets as the two top seeded GMs both lost.  On board one of the four day schedule, GM Daniel Naroditsky lost to NM Michael Aigner, who is also known to Chess Life readers as f-pawn. Meanwhile on board one of the three day schedule, GM Dragun lost to IM Vincent McCambridge.  As the schedules merge, there were ten perfect scores:  GMs Andrey Stukopin, Conrad Holt, & Ruifeng Li, IMs Cameron Wheeler & Vincent McCambridge, FMs Teemu Virtanen, Dale Haessel, NMs Michael Aigner, and Sijing Wu & Kenneth Hills.  The results of the perfect scores in round three were mostly decisive with one notable exception.  Stukopin had black and drew rather quickly with Virtanen while in the rest of the games the favorite won the game.  That left two GMs Holt and Li with IMs Wheeler & McCambridge entering round four with perfect scores. Li drew with Wheeler while Holt beat McCambridge to emerge as the only perfect score at 4-0.  However, there were ten other players following at 3-1 led by GM Dragun, GM Naroditsky, IM Harmon-vellotti, IM McCambridge, and IM Teddy Coleman. In round five, Holt would face Li on board one with the black pieces while Stukopin faced Wheeler on board 2.  Li defeated Holt, and Stukopin defeated Wheeler to emerge as the leaders going into the last day.  The leaders were being chased by several players hoping to catch up.  Dragun, Naroditsky, and McCambridge won, but Hamon-vellotti drew while Coleman was upset by Alex Kolay. In the penultimate round, the tournament leaders Li and Stukopin drew quickly.  Naroditsky defeated McCambridge. Holt defeated Kolay. And, Dragun was paired down a score group and defeated Jack Zhu.  This set up a five way tie going into the last round with the top five seeds of the tournament: GMs Dragun, Naroditsky, Stukopin, Holt, and Li. Li had opted for a last round bye due to an early flight.  This meant that Stukopin would play Dragun on board one, and Holt would play Naroditsky on board two.  NM Siddarth Banik had 4 ½ points and could tie for first if both boards ended in draws and he could beat IM Wheeler. 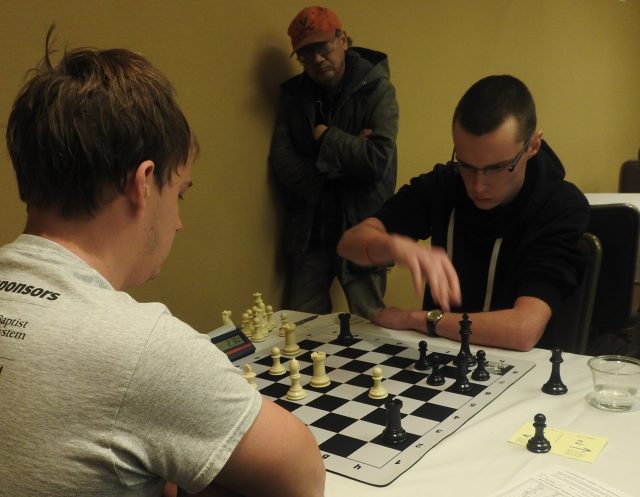 Banik did in fact defeat Wheeler, and Holt and Naroditsky did draw.  However, Dragun defeated Stukopin to finish at 6-1 and clear first.  Naroditsky, Holt, Li, and Banik tied for second at 5 ½ - 1 ½.

The under 2300 prize was won by Alex Kolay with a score of 4-3.  After taking a first round half point bye and then winning in round 2, he was paired up every round over two hundred points including a GM, an IM, two FMs, and one NM.  He picked up 45 rating point this weekend! All the under sections were also won with scores of 6-1.  Some were clear winners, and others were co-champions.  In the Under 1500 section, Harishankar Raghunath was the only player to enter the last round with a perfect score.  He was already a point ahead of the competition and secured at least a tie for first.  He did lose the last round and had to settle for being co-champion. The mixed doubles competition was won by a familiar team.  Ruifeng and Rachael Li both started with 5 out of 6 and opted for last round byes in order to catch a plane.  They each tied for second in their sections, but their mixed doubles team won clear first. Just like the regular event, the blitz event ended in a large tie for first with the top seeds all in the tie.  Derek O’Connor, Ezra Chambers, Saik Tsogtsaikhan, Anthony Blessing and John Wang all scored 6-2 to tie for first. Wang took the $69 Under 2100 prize while the rest split first and second place for $43.13. The section winners were: