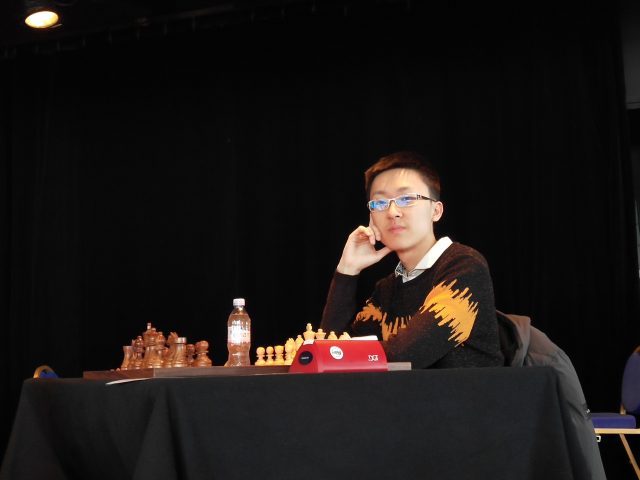 GM Bai Jinshi
The 28th Annual North American Open, with a guaranteed $120,000 prize fund drew 817 players, up from 2017’s 802 turnout, to Bally’s in Las Vegas in the days after Christmas. The 114 player Open section featured ten GMs, 14 IMs, one WGM, and four WIMs. Form prevailed, with the top seed, GM Bai Jinshi of China, emerging on top with a 7 ½ - 1½ score. He’s been a GM for three years and the Cannes Open 2016, with a strong field of GMs, was his previous best result. Bai, 19, playing in only his third US event, is considering higher education options and has visited several US colleges. He held a clear lead from round 4 on, and after beating IM Teddy Coleman in the sixth round he was able to hold first by drawing with IMs Advait Patel and Dionisio Aldama. Bai then faced his only GM opponent, Ruifeng Li of Texas. Li tried an unusual gambit, but didn’t get what he wanted. Stockfish says Black’s a bit better after 10.Nxc3 Qxd1 11.Rxd1 Bxc3 12.bxc3 Bg4, so needing a win, Li tried 10.Qa4, but fell victim to a devastating piece sac which led to an early mate – with White’s pawn still sitting on g7. Two IMs won last round games to reach 7 points and a tie for second. 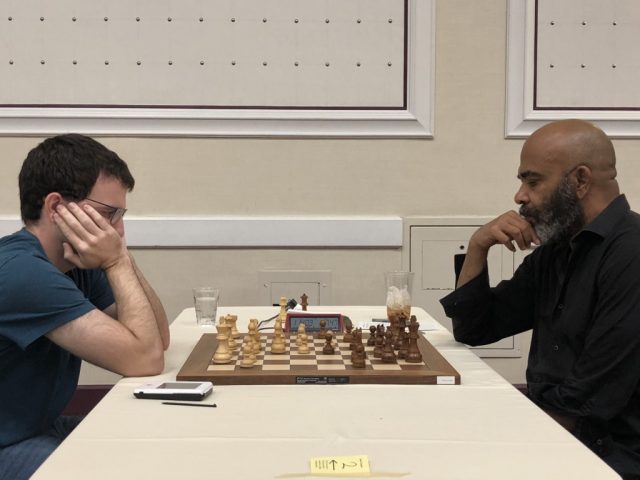 GM Robert Hess vs. IM Dionisio Aldama at the 2017 North American Open
The 2017 co-winner, Dionisio Aldama, had yielded a first round draw to FM Guannan Song and later lost to FM Edward Song; more on that game below. But in the final round he uncorked a mating attack against a Polish GM after the ill-advised 16…Bg6. 24…Ra8 or 24…Qc7 would have kept Black in the game; the last chance to prolong things was 27…Rce4 28.Nxe6 Rxe4 29.Nxd8 Rxg4. The Black king hoped to escape the coffin after 30…Rd8, but 31.Rf1 slammed it shut. After a shaky start with 1½ /3,  IM Zhaozhi Li, also known as George, of Illinois stormed back with 5 ½ of the last six, downing GM Steven Zierk in an unusual Najdorf-Dragon hybrid in the final round. 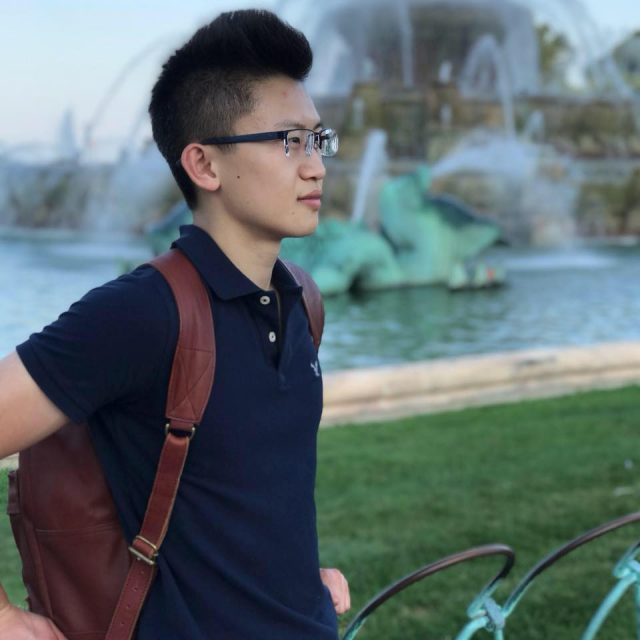 IM George Li
The engine much prefers White after 18.c4; the inferior 18.Nd2 allows Black to finally capture the d5 pawn. The combination initiated by 19.Bf3 simply fails; 20.Qxg5 would answered by 20…(either)Rg8. Black remained a piece up, and his king easily survived some checks. Li, 18, thus tied for second. Two young stars, 16-year-old IM Advait Patel of Oklahoma and Mika Brattain of Connecticut (rated 2411, but without a title!), 20, both scored 6½ to split fourth and fifth places. Jack Qijie Zhu, 20, of the Bay Area earned Under 2400 honors, also with  6  ½  points. He also earned his first IM norm, though he hasn’t applied for FM and hasn’t studied the norm-seeking process. Going 5-0 with White was central to his result, and he seems to like long endings with an active king! Here’s the final portion of his final round upset of IM Michael Mulyar. Stockfish gives equality after 60…g5+ or 61…g6; the effort to advance the c-pawn toward promotion is easily handled. After 61…g5+, 62.Ke3 should win easily. Instead, after the en passant capture it’s equal again, with Black’s knight activated, and 66…Rf3 would have kept it that way. But after 66…c3? 67.Rh7, the potential x-ray on c8 ends Black’s queening hopes. In the final position, e6-e7 is unstoppable. Ruifeng Li led the group of 15 (!) six-pointers. It included FM Edward Song, 19, of the University of Michigan, who notched his second IM norm. He upset Li in Round 4, but it is his aforementioned win over Aldama in the next round that he graciously offered to annotate. It vividly illustrates the ups and downs (both on the board and emotionally) of competitive master chess. 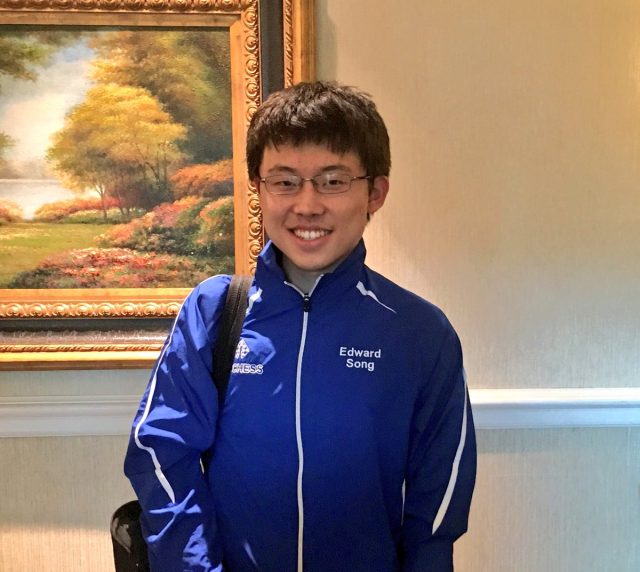 Edward Song
The third IM norm recipient is a veteran, 35-year-old Eugene Yanayt of Pasadena, California. A member of the strong CalTech teams of early in the century, his FIDE rating is only 2143. But he began with three straight wins and played up every time to finish with 5½. Zhaozhi Li was the first victim. Yanayt omitted the …f5-f4 that is characteristic of many King’s Indian, and his effort to play on both sides of the board might have failed had White played 16.Bc2. Instead, the grab of the a-pawn on the next turn led to complications favoring Black, and White’s king was eventually caught in a crossfire.39…Re2+ and 40…Re4+ both win more quickly, but there’s no need to gild the lily! The class sections, with seven rounds, all had clear winners, with youth frequently prevailing. But in Under 2300, it was a 29-year-old, Vijay Krishnamoorthy of San Diego, who emerged on top with 6 points. He’s a hardware engineer at Qualcom and chess is strictly a hobby for him. 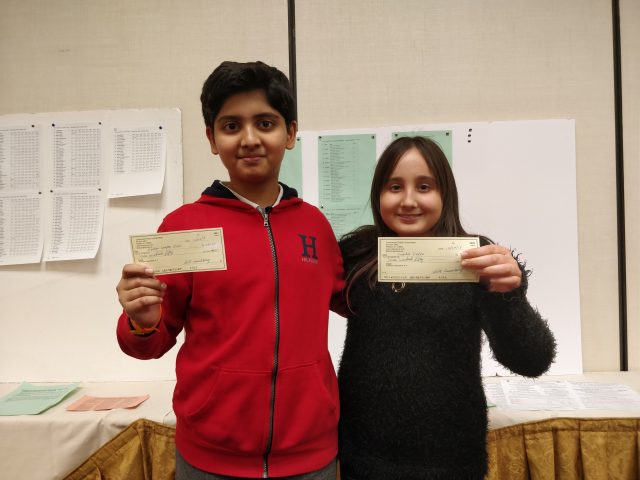 U2100 winner Roshen Nair with his Mixed Doubles partner Sophie Velea
Under 2100 saw a 6½ point winner, Roshen Nair of Portland, Oregon. He got a nice bonus when he and Sophie Velea tied for first place in Mixed Doubles. Roshen played on the gold medal winning US team in the Panamerican Youth Championship last year. One other player in that section deserves special mention: Rachael Li of Texas, who gained 57 points and at 2048, appears to be the highest eight-year-old in the US – period! And a Happy Birthday to Rachael, who turns 9 on January 6th! No more mixed doubles prizes for her and brother Ruifeng; their average was already over the 2199 limit. But she and Joseph Levine did tie for third. 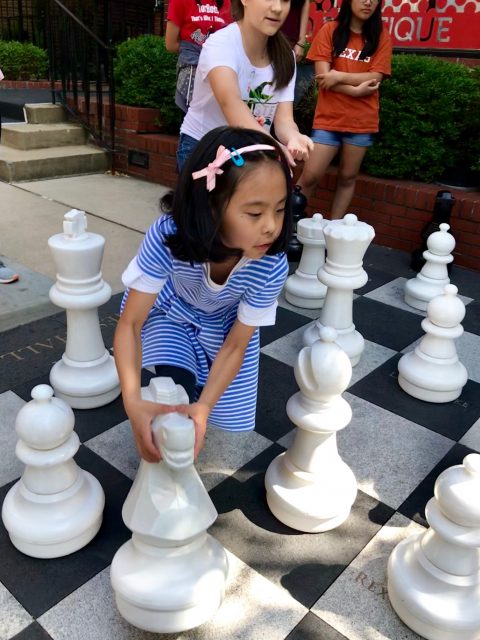 Rachael Li
Under 1900 victor Michael Higgins is 32 and works with at risk youth and people with disabilities in Cincinnati. He started 6-0 (a score that frequently intimidates opponents) and then drew. Michael started tournament chess at 16, but has had periods of inactivity…let’s hope that this great result spurs him on to greater heights. 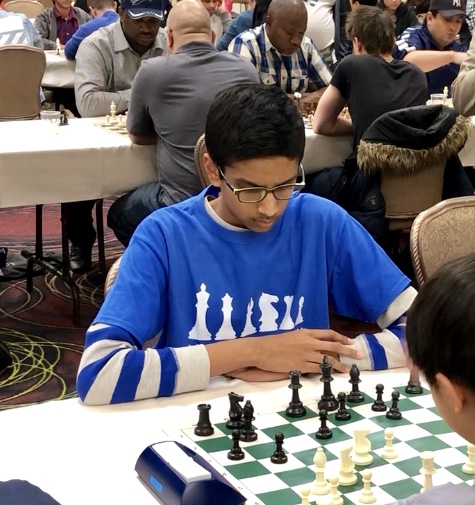 6½ also earned honors in Under 1700 for Atharva Gorantiwar, 14, of Wayzata, Minnesota, who began tournament chess only eight months ago! He’s a freshman at the high school from which GM Andrew Tang recently graduated. Atharva needed to win his last game to reach 6½, and it’s imperfect as one would expect, yet instructive. 17…g5 is much too ambitious; 17…a5 or 17…Qd8 would have maintained an edge. But fortune favors the bold, and when White played 25.Kh2 he got mated. 25.Kh1 Nd2 26.Nd7 Nxf1 (not check) 27.Nf6+ would have reversed the result. Sixto Alfonso Butron Haro, 38, of Tijuana followed the “6-0 and then a draw” pattern to win the Under 1500 section.  He plays in some San Diego tournaments and is a student of IM Aldama. The only perfect score was achieved in Under 1250…by a seven-year-old! Jayden Qu is Canadian national champ in his age group. He learned chess at five in his local library. Jayden topped all his rivals by a full point. 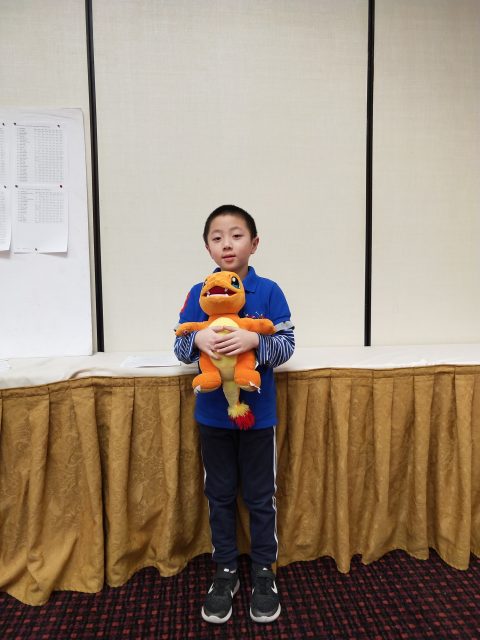 Jayden Qu
We mentioned one of the teams that tied for first in Mixed Doubles with 11 of 14 points. The other was comprised of Jiayang Yang and Xuhuii Yang.  There were a total of 76 teams. And the Blitz, with 184 players, saw GMs Julio Becerra and Karthik Venkataraman atop the Open section at 9-1 (a full point and a half ahead of their pursuers). Benjamin Yang and Shreyas Nayak took the Under 1900 group, also with 9-1 scores. Any tournament in Las Vegas is bound to generate a couple of anecdotes. We mentioned that GM Bai was the top seed…but he wasn’t always the top-rated player in the room! French GM Maxime Vachier-Lagrave, currently sixth in the world, was in town and dropped by several times to spectate. Then there was the player who talked his way into a comped suite. When management discovered he was playing chess rather than gambling, he was unceremoniously evicted and presented with a bill. Fortunately, he won a good-sized prize. Chief TD and Continental Chess honcho Bill Goichberg looks forward to another successful NAO next December at Bally’s.
For final standings, prizewinners, and game file, see http://chessevents.com/northamericanopen/. For post tournament ratings, see the tournament's MSA.
SHARE: