Bay Area Chess hosted the 42nd People’s Tournament at UC Berkeley’s Faculty Club from July 14-16. This was the second consecutive time the tournament was hosted at the UC Berkeley Faculty Club, and the event drew over 170 participants. The field included four grandmasters and four international masters, including new Google employee GM Conrad Holt and Stanford student GM Parimarjan Negi. Since this heritage tournament was originally founded and first held in Berkeley, CA, bringing it back to this location was extremely important emotionally for many of the players in the Northern California chess community. The historical site provided a majestic, comfortable, and intimate venue for the distinguished members of the NorCal chess community. 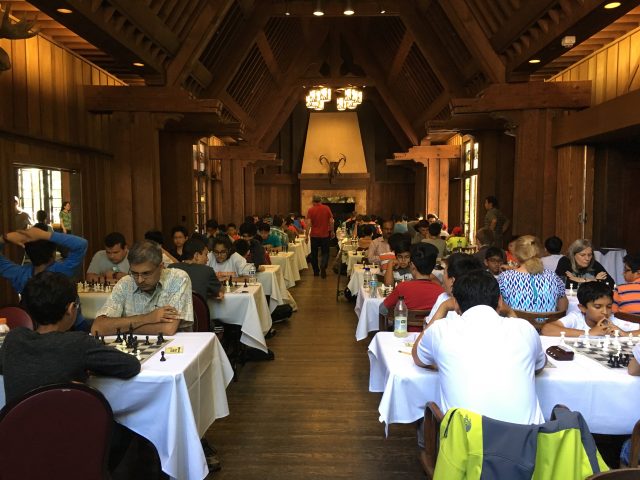 Historical site for the 42nd Peoples Tournament: The Faculty Club at UC Berkeley
GM Holt won clear first in the Open Section with 4.5/5, taking home $1635 after defeating both IM Kesav Viswanadha and GM Enrico Sevillano, and only conceding a third-round draw to NM Jack Zhu. IM Viswanadha, GM Sevillano, and GM Nick De Firmian shared second through fourth places, and IM Elliot Winslow, Joshua Cao, John Canessa, and NM Derek O’Connor split the under 2300 and 2100 prizes. On his route to second place, IM Viswanadha (who will attend Cal in the fall) beat GM Negi! The game is annotated below. 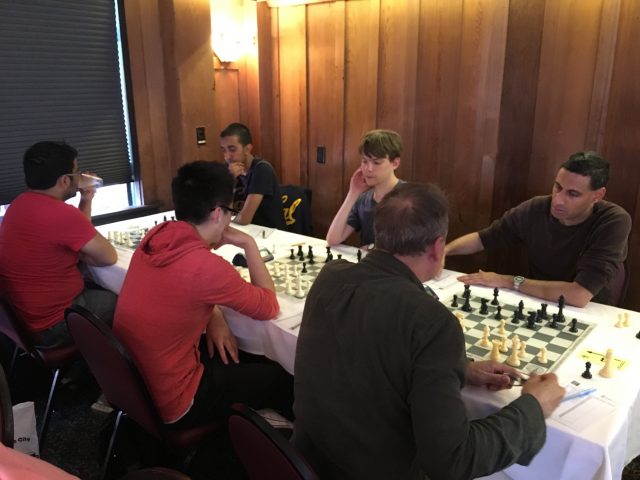 Round 3: Top Boards at the 42nd Peoples Tournament in UC Berkeley, CA
Also in the third round of the open section, Rui Yan and Rochelle Wu battled over the board in the rare pairing! Why is it rare? Both girls are the TOP female players in the country in their age groups, Age 10 and Age 11, respectively. The game ended with Rui’s victory. 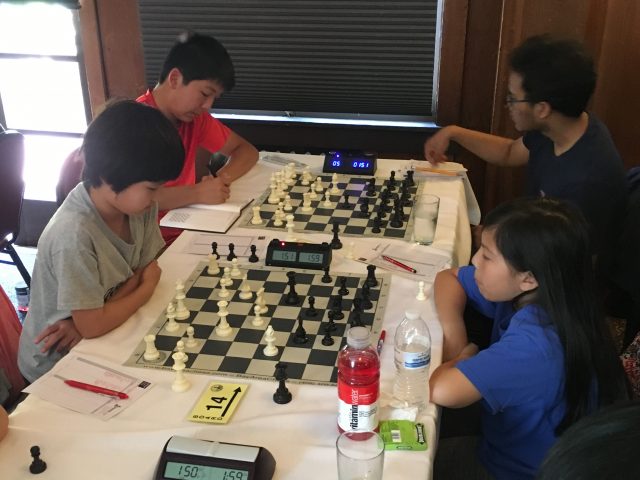 Rui Yang Yan (1970) faced Rochelle Wu (2082) in the third round.
The game is annotated below. In the A section, Felix Rudyak won clear first with 4.5/5, and in the B section, Wenyang Du, Sos Hakobyan, Cailen Melville, and Nathaniel Zhang split first, all with 4/5. Sean Hayes took first in the C section with 4.5/5, and Morgan Fry’s perfect score secured first in the DE section. Complete results can be looked up on BAC’s webpage, and more pictures from the event can be see on BayAreaChess’ Facebook album. The tournament was organized by Dr. Judit Sztaray, the 2017 US Chess Organizer of the Year, and directed by STD Richard Koepcke. For more information about tournaments organized by BayAreaChess, please visit www.bayareachess.com. The next major tournament is the Northern California State Championship, held at the Santa Clara Convention Center during Labor Day weekend (9/2-4, www.bayareachess.com/labor).
SHARE: