GM Hess on the World Cadets: US Team on an Upswing 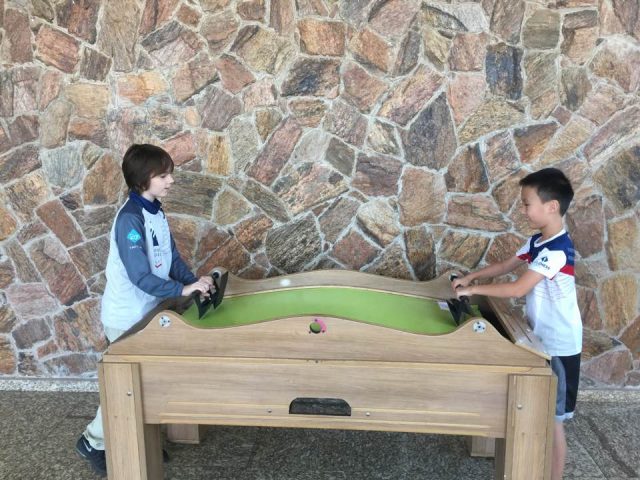 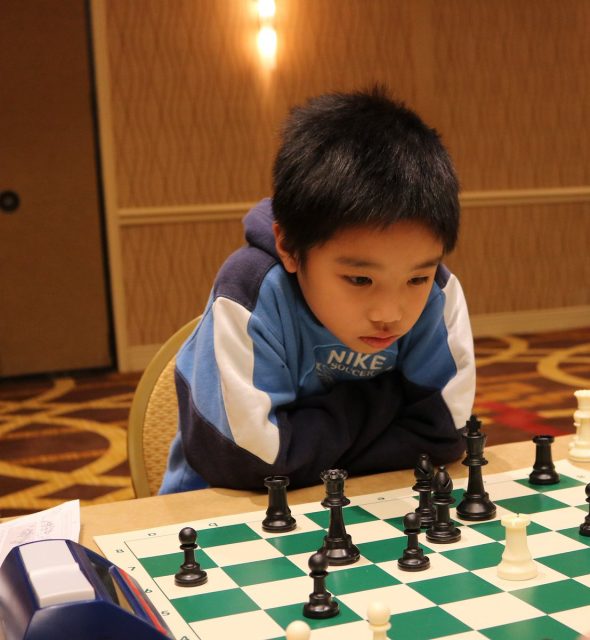 Under 8 Open (click for current results and pairings) Abhimanyu Mishra became the youngest expert in US Chess history last year and is seeking to become the youngest master. On his path to that title, he hopes to include a gold medal. After the rest day, Mishra sat in clear first with the only perfect score, with Steve Wongso (4.5/5) right behind.  Steve climbed into second place by defeating his fifth-round opponent with the King’s Indian Defense. He misplayed the opening and had a bad knight on b7, but once his opponent erred he unleashed a vicious attack on the kingside. Still, Steve slipped and the topsy-turvy battle continued. In what was one of the most entertaining games of the entire event, the King's Indian action speaks for itself.   Wongso and Mishra squared off in round 6. 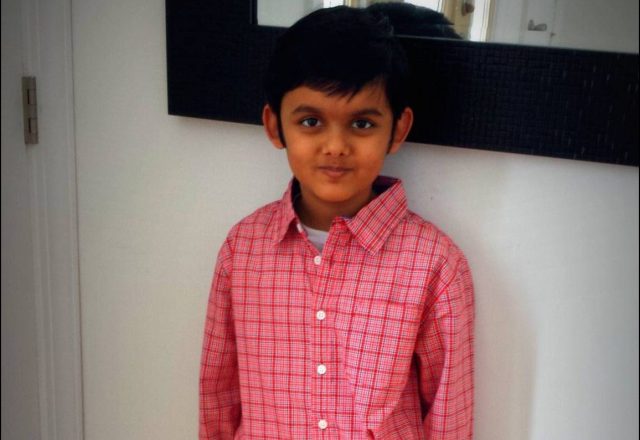 Abhimanyu Mishra, now on 6/6.
Also doing well is Aren Emrikian. Although he’s not one of my students, I had the pleasure of analyzing one of his games when his coach was busy. He’s an extremely nice person off the board and a dangerous opponent on it! Under 10 Girls Ellen Wang (5/6) is the name to watch in this section. Coming out of the rest day, she trailed the leaders by half a point, though unfortunately she had to beat two of her compatriots along the way. Both Rui Yang Yan and Tianna Wang lost to their friend Ellen, but still had strong scores of 3.5 and 3.0 out of five rounds, respectively. Ellen went on to win on Sunday to move her score up to 5/6: The highest rated player in the section is Hungary’s Zsoka Gaal, who boasts an impressive 1956 FIDE and actually has gained another 100 points. Zsoka tied for first (silver on tiebreaks) in the Under 8 Girls in 2015, so she has both strength and experience. However, upsets are commonplace in world youth events, as evidenced by Shivika Rohilla’s 4.5/5 score despite having a pre-tournament rating of just 1251. In fact, Shivika already drew Zsoka, further indicating that the kids should ignore their opponent’s rating. Interestingly, the top seven places are occupied by players from seven different countries. The standings exhibit the “world” in World Cadets. Under 10 Open Looking at the leaderboard of this event, it would appear that few non-Americans were playing in it. An absurd 10 of the top 19 places are occupied by American players. 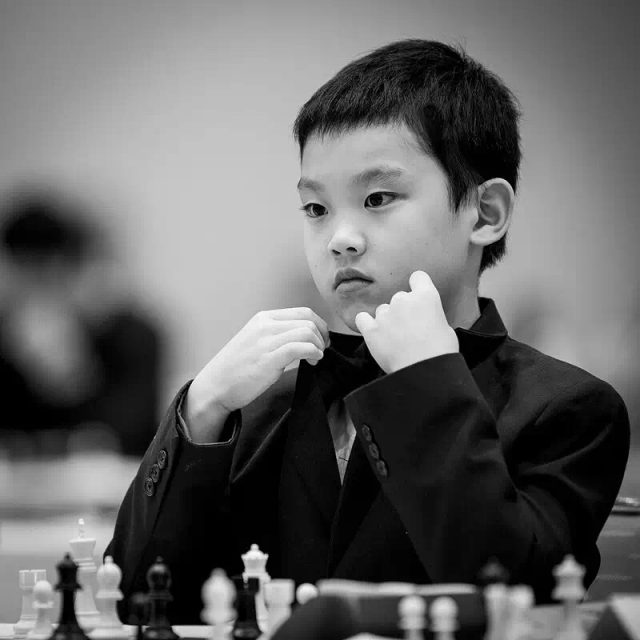 Liran Zhou. Photo courtesy of the Zhou family
Arthur Xu and Liran Zhou, who earlier this month broke the U.S. record for youngest master, share first with Dev Shah of India. All three came into round six with 4.5/5, with Arthur and Liran facing off:  Amazingly, many of the other Americans avoided playing one another on Sunday. Lucas Foerster-Yialamas (4.0/5), whose birthday we celebrated at the team dinner sponsored by Two Sigma, played on board three in round six. Frank Prestia (4.0) was on board four, Vyom Vidyarthi (4.0) on five, Jack Levine (3.5) on six, and it isn’t until board seven that we see two American flags, with Luke Ye facing Adrian Kondakov. Tejas Rama and Adi Murgescu are in contention just like the aforementioned octet. All eyes have been on India’s Bharath Subramaniyam, who outrates the French quartet seeded after him by over 240 points. Bharath won the World Cadet under 8 in 2015 and is currently rated over 2200 FIDE. 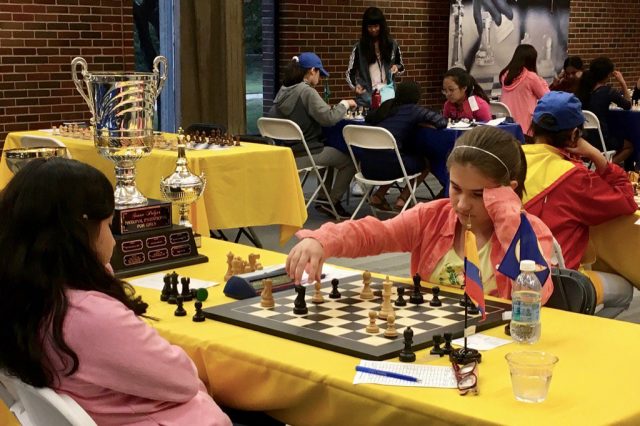 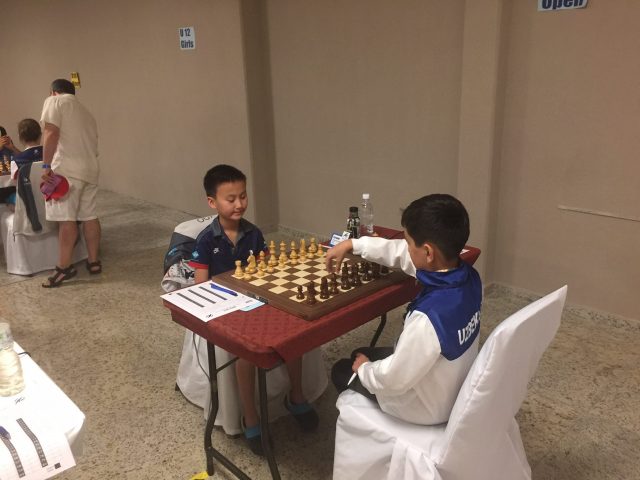 Yoo vs. Sindarov
While that star matchup grabs the headlines, don’t overlook Gabriel Eidelman, who lost on board two in round six to Gazorig Amartuvshin, but seems to be underrated at 1884 FIDE. He earned his 4.5 points by drawing a 2282 and defeating a 2126 (Maximillian Lu, another former record holder for youngest American master) and a 2281 (Anthony He from the USA).  Gus Huston and Vincent Tsay both came out of the rest day with 4/5, so they are in striking distance too. There is too much chaos to handle in this event, with 14 Americans on the top 15 boards. Of course that means that friends will be paired, but it also bodes well for medal chances. For instance, Gus will play his fourth American opponent in round six. One final note I’ll add is that it is very important to me to see more girls gaining access to chess. While I am happy to see that progress has certainly been made, there remains a noticeable disparity: there are 253 players in the open sections compared to 166 in the girls sections. Follow results and pairings at chessresults.com and live games on the top boards at chess24. Find out more about sponsor Two Sigma here.
SHARE: