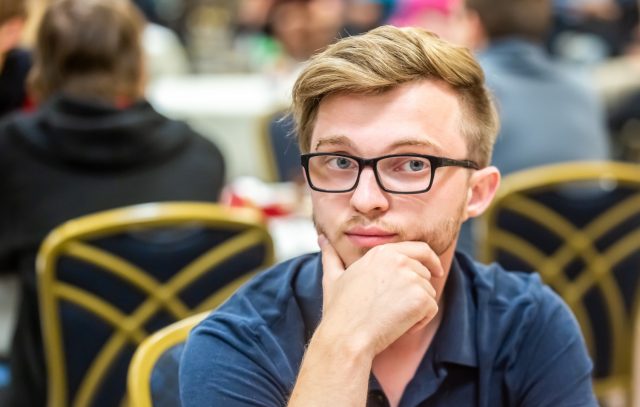 Vladimir Belous (photo David Hater)
The event drew 309 players in seven sections, all trying for their piece of the $20,000 guaranteed prize fund. The 61 player Premier section drew three GMs, one IM, two FMs and a total of 19 players over 2200. The competition was fierce and even when the top players won, they had to have a bit of luck. Case in point: playing on board one of the three day schedule, GM Corrales had to pull a rabbit out of the hat as he was down an exchange against Todd Freitag. Corrales eventually won, but the game was one of the last to finish. The round two game between Belous and Tom Bareket is another example. Belous commented after the tournament that he was completely lost, feeling that he was -10 (in the language of computer evaluations) in the critical position. He was pretty close: Stockfish says it was about -9. Bareket played well, sac’ing material and even having forced wins on the board, but he let the GM off the hook. Belous managed to escaped, and then converted the material into a win. In fairness to both players, this game was played in the two day schedule which was G/60, so it would not surprise me if time was a factor. [fen]r2qr3/p3k3/1p5p/2pP1Qp1/1PP5/2B2p2/P4PPP/6K1 w - - 0 29[/fen] Bareket could win in the diagrammed position with 29. Qe6+ Kf8 30. Qxh6+ Ke7 31. Kf8 Qf5+ 32. Ke7 Bf5. Instead Bereket played 29. Bf6+ and after 29. … Kd7 the black king escapes and the material is decisive. Corrales’s luck was used up in the first round, as he surrendered a round two draw to NM Tom Polgar-Schutzman. The top board games in round three round were all decisive. GM Zherebukh defeated SM Grabinsky on board one, Belous defeated NM Furfine on board two, IM Stremavicius won over FM Lehman on board three and FM Williams beat NM Padhya on board four. NM Zhou was paired “down” to Corrales and Corrales won to remain a half point behind the leaders. Going into Sunday, there were four perfect scores: GMs Zherebukh & Belous, IM Stremavicius and FM Williams. GM Corrales led the group of players who trailed by half a point. GM Zherebukh defeated IM Stremavicius on board one and GM Belous beat FM Williams on board two. Only the top two seeds were perfect headng into the final round: GMs Zherebukh & Belous. But before the tournament started Zherebukh opted for a last round bye, ensuring he would finish at 4.5 points. Two players, GM Corrales and NM William Graif, were at 3.5/4. Belous took white versus Corrales on board one while Stremavicius played white versus Graif on board two. The advantage of the first move showed here, as both Belous and Stremavicius won. That left the final standings as Belous in clear first at 5/5 and Zherebukh clear second at 4.5/5. Stremavicius tied for 3rd with FM Spencer Lehman (who Stremavicius defeated in round 3) and NM Dimitar Mardov who pulled off the upset versus Justus Williams in the last round. The class sections have overlapping rating ranges, giving players the option to choose whether they would be among the higher rateds or play in the lower section where they would be in the bottom half. This is an attempt to balance those who want to play up with the desire of other players to limit who can play up so that they face strong opposition every round. The section winners were: 1700-2099 Section Rene Ancheta & Ramesh Shanmugasundaram, 4 ½ -  ½ $1050 1500-1899 Section Hector Hernandez & Timothy Lim, 4 ½ - ½, $1050 1300-1699 Kevin Yiu, Gee Leong, & Gabriel Maguire, 4 ½ - ½. $800 1100-1499 Alexander Gura, 4 ½ - ½, $1200 U1300 Daniel Kim, 4 ½ - ½, $1000 U1100 Vinay Sridhar, 5-0, $500 Mixed Doubles GM Yaroslav Zherebukh & Simran Bhatia and Vinay Sridhar & Sofia Pashyan 7 ½ –2 ½, $300 each Blitz Aaron Grabinsky, 8-0, $110 NTD David Hater directed for Continental Chess assisted by Bill Buklis, Jeff Wiewel, and Steve Plotnick. Previous Continental Chess tournaments can be found at the Continental Chess website at http://www.chesstour.com/cross.html.
SHARE: