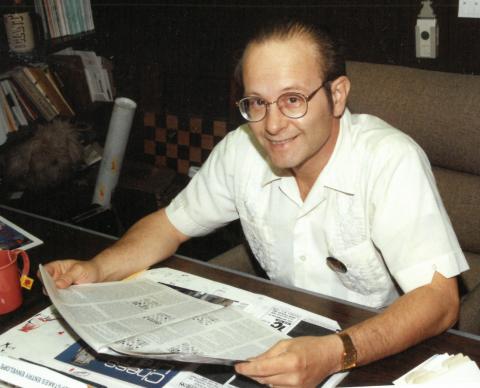 US Chess has received notification that our former long-time employee Glenn Petersen has died at the age of 72 in New Jersey. Glenn began work at US Chess in 1989 and continued until 2017.

Glenn held a number of positions at US Chess: Assistant Director, Chess Life Editor, Director of Publications, Publications Consultant, and Scholastic Editor. He started as Chess Life editor in 1990, continuing in that position until 2000. He served as editor again briefly in 2003 and in 2005-2006. He was the initial editor of Chess Life for Kids (now named Chess Life Kids).

A longer obituary will appear in a future issue of Chess Life. We extend our condolences to Glenn Petersen's family, friends, and colleagues.

Very sorry to hear this…

Very sorry to hear this. When I was active in OTB play, Glenn directed many of the events I played in. I always though he was a very nice man.

I worked for Glenn and was a…

I worked for Glenn and was a friend of his. The chess community lost a friend as well. This will be hard to get over as he has been a fixture in the national scene as well as New Jersey. I will also always remember his First Sunday of the Month Quads which he organized for a long time. You will be missed, Glenn. Prayers to his family and Rest in peace, Glenn.

I worked with Glenn on a…

I worked with Glenn on a number of "Chess Life" articles I authored, and was always very impressed with his professionalism, knowledge, and gentlemanly qualities. His diplomatic skills effectively navigated the often turbulent USCF political waters during the times he served, such that he retained the respect of all. He was one of my favorite people in chess. John McCrary, past USCF President

He went to the hospital last…

He went to the hospital last week for a long scheduled operation. I last talked with him on 8/14 at home, He was having pain in his legs still. He had morphine in the hospital. He had taken percocet for 2 & 1/2 days at home. His painkiller was switched, but he didn't remember its name offhand.

Glenn & I, both old movie fans, had a running search for actors & actresses, who had reached 90 years old. We compiled the last for about five years now.

I will sorely miss our calls, which were about every other day. He was a dear friend and confident.

Glenn was Chess Life editor when I was Executive Director. He was great to work with and one of the nicest guys in the entire US chess community. Very sad to hear the news.

So sad by this news. Glenn…

So sad by this news. Glenn was a mentor and a friend, and my biggest regret was not following all of his advice to a T. Glenn saved the 1986 US Open here in NJ and did an absolutely great job in directing that event and he was unselfish in giving me some great advice in trying to get the 1994 US Open for St. Louis when I first moved there in 1991. After my failed bid presentation in 1991 in Los Angeles, Glenn came over to me and said, "You Led to the Best of Your Ability" and I took that to heart. Of course, Glenn was synonymous with the First Sunday of the Month Quad events in Edison and eventually, Somerset and can remember keeping Glenn at one of those events until 2 in the morning. That day, I won all 3 of my games and it took me 16 hours to do it, given the 2 adjournments in the first 2 rounds.

Glenn was very dedicated to our game, and was an absolutely, down to earth person. He always was unselfish in imparting his words of wisdom, and am forever greatful. Thank you Glenn, for all you did.

Part of me has died with…

Part of me has died with this news.

I played in his events. I was proud to work with him.

He was one of the few people in chess who I trusted completely.

Glenn -- we are at 323 and counting in Allentown. You know what I mean.

To anybody in New Jersey…

To anybody in New Jersey Glenn WAS everything good about chess. He and Pete Tamburro delivered the best state newspaper in the country-Atlantic Chess News.

He was a tireless tournament director at the first Sunday of the Month Quads in Edison and became an excellent editor of Chess Life.

New Jersey was lucky to have such a dedicated nice person keeping our state as the best chess state in the country. He will be greatly missed.

I have known Glenn since the…

I have known Glenn since the 70's when he ran his monthly First Sunday of the Month Quads. I also had the pleaure of attending his Dunellen Chess Club. as well as our many meetings at the old Westfield Chess Club that met on Friday nights and played hours of Blitz with him till the wee hours of the morning.
Years later he had some health issues landing him in a Rehab center in Eatontown, New Jersey which was right across from where I used to live and close to where I worked, so I was able to pay him some much needed chess visits during his 6 week stay there.
After that, he became a member of our team for the US Amateur Team Championship from Feb 2006-2016.
We became good friends.
For a few years we were able to meet with others on Saturday nights for games of Blitz until Covid ended that in March of 2020. After that it was contact by phone for most of that time.
He had some recent surgery and I was able to speak with him on Tuesday of August 11 2021.
During all these years I found Glenn to be a warm and caring friend who was loved by many. He was kind , giving and supportive along wih being one of the best chess directors that I'v come across.
He touched 100's if not 1000's of people in the chess world.
Glenn will be missed by many friends and aquaintances who had the pleasure of knowing him .
He will be sorely missed.
RIP my good friend.

Thank You, Glenn, for your…

Thank You, Glenn, for your many years of selfless service to Chess and to the Chess World.

As a freshman at Dickinson…

As a freshman at Dickinson College in 1968, I met Glenn at the Chess Club. We all went to New York city for a tournament and stayed at his house. He was always so helpful and kind to me. He did all of the organizing for our Chess matches, including a match at the Lewisburg State pen. He was a gift to the game.