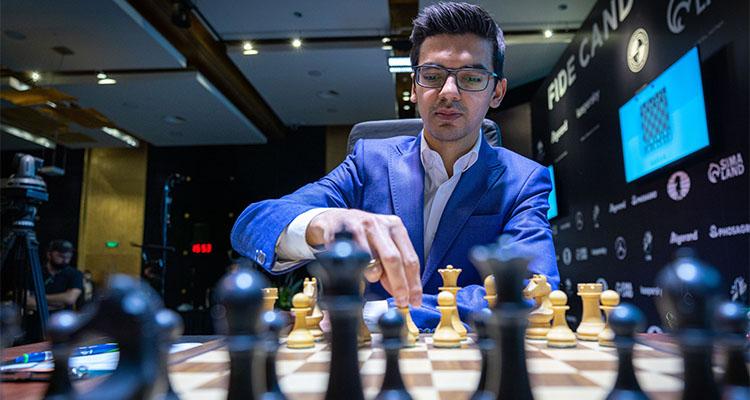 Image Caption
GM Anish Giri was the sole winner in Round 9 of the FIDE Candidates Tournament. // credit Lennart Ootes, FIDE

Dutch Grandmaster Anish Giri regained his step in the 2020-21 Candidates Tournament on Tuesday, scoring the only decisive result in the ninth round to find World Champion Magnus Carlsen’s next challenger.

With the full point floating him up to World No. 5 according to live rankings, Giri’s convincing win over Chinese GM Wang Hao also lifted him in the Candidates standings, bringing the Dutch GM back into second place with five games remaining. With the other three games in Round 9 settling peacefully, Giri rejoins American GM Fabiano Caruana and French GM Maxime Vachier-Lagrave in a pack at 5.0/9 that trails tournament leader GM Ian Nepomniatchtchi by a half point.

Though no remaining round in the Candidates lacks impact, Wednesday’s Round 10 will bring a pivotal matchup between Giri and MVL, who gets his first shot with the white pieces since the eight players returned to the board. Equally as important is a revenge game for World No. 2 Caruana, taking white against Chinese World No. 3 GM Ding Liren, who in eighth place has suffered on both sides of the event – but tallied his only tournament win against the American in Round 3. 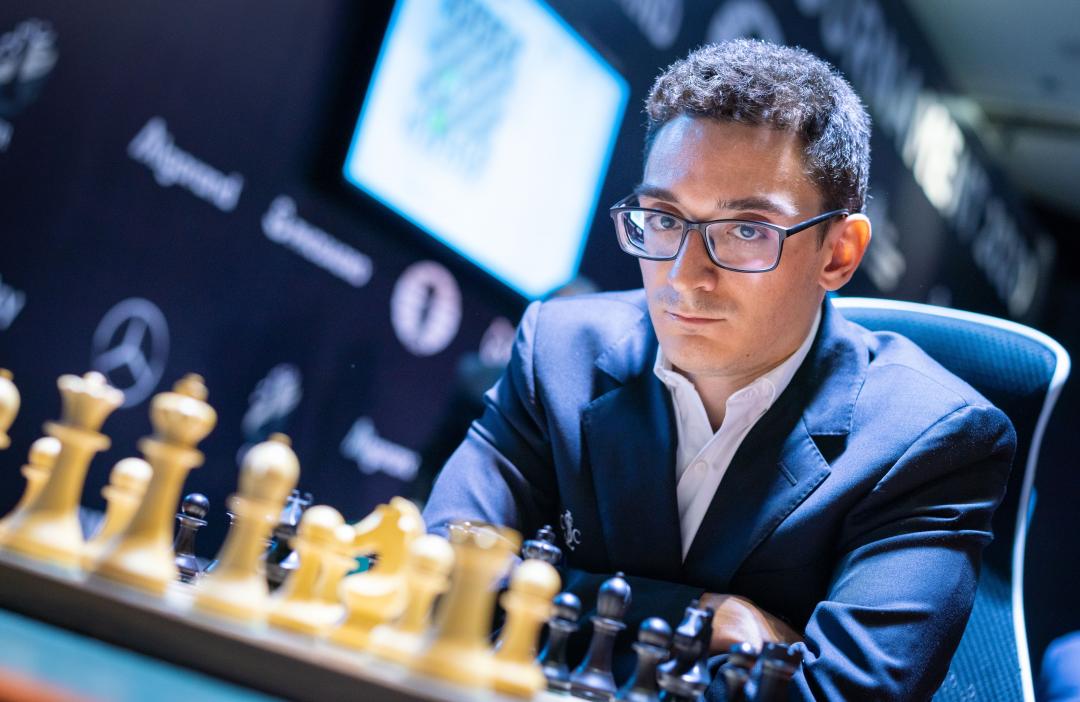 On Tuesday, Caruana’s peaceful draw as Black against Russian GM Kirill Alekseenko seemed like a missed opportunity, if only for the American finding himself up material two different times during battle. In a Giuocco Piano of the Italian Game, Caruana grabbed two pawns at 12. exd4 and 13. dxc3, which Alekseenko ignored in lieu of Black’s dark-squared bishop. But Caruana surprised the Russian with the follow-up 14. c2 instead of capturing again on b2, a “too dangerous” idea the American said he never considered.

Caruana showed patience again through a sharp middlegame, attacking but not capturing White’s stranded a-pawn for nearly 10 moves while he consolidated his pieces. And when he did finally grab the free pawn at 29. … Nxa4, he followed with 30. … Nxb2, going up two pawns and creating a dangerous pair of connected passers. But Alekseenko, who has had a solid 1.5/2 restart to the Candidates including yesterday’s victory over countryman GM Alexander Grischuk, once again performed well under world-class pressure, using the time to reactivate his pieces and then reclaiming material balance just a few moves later. In a rook-and-pawn endgame, Caruana pushed his passer as far as a2 before the blockade, and the two kings cleaned up the mess. 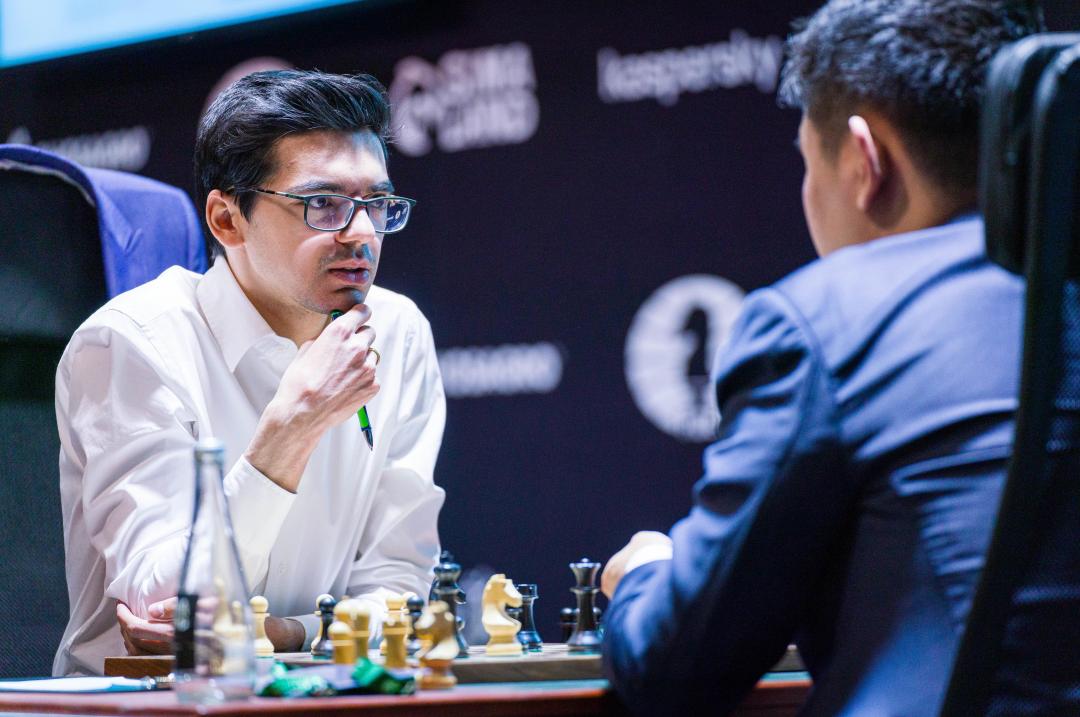 In the day’s only victory, Giri found solid positional footing through a Closed Catalan setup by Hao, then seemed content to slowly squeeze the Chinese GMs position. After the game, Giri described being careful through the game with minimal advantage, while Hao claimed he struggled to find continuations throughout – including a numbing 27. … g6 that weakened his castle, where he later admitted “I just couldn’t find a move.”

Giri’s patient improvement and slow restricting effect built into full territorial control of the queenside, using a queen-and-rook battery to both command and conquer the seventh rank. Hao resigned just before the time control at 39. Nxf7, with Black's defense successfully cracked. 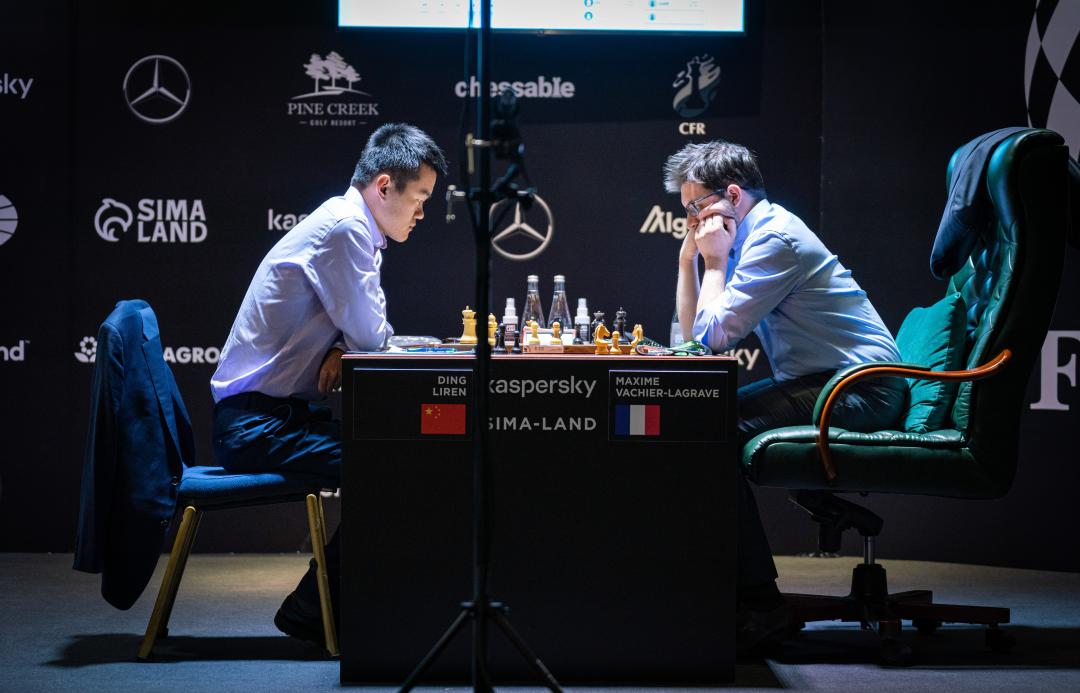 There is no rest for the weary in the Candidates, as MVL was pushed into his second six-hour affair in as many days – though at least there was fruit at the end of Tuesday’s game against Liren. One day after suffering through a 74-move marathon loss by the hands of Caruana in Round 8, the Frenchman took Black for the second time in a row and found himself once again up against a year’s worth of preparation.

His plans for the Grunfeld defense went askew with Liren’s 3. h4, a surprise attack on the wing which invaded further at 10. h5. Vachier-Lagrave chose to abandon his dark-colored bishop at 11. … Bxc3, then absorbed the h-pawn and focused his knights to a powerful e5 outpost. Still in prep, Liren answered with a sacrifice 15. Nd4!, which MVL accepted and returned on the very next move. The exchange left him bad, however, and the situation went from bad to worse after an exchange of the remaining minor pieces on c5 produced a connected passer for White.

The passed pawn, however, was not to be pushed at 36. d6, a premature shove by Liren that allowed MVL to corral the threat and resolidify his position. A visibly dejected Liren continued to probe a dangerously open board with his queen and rook for more than 50 moves and several grueling hours, though MVL successfully defused the effort. A draw by repetition came at move 88.

“I faced very big problems, my position was collapsing, and I was afraid that the game might end in two moves,” Vachier-Lagrave said. “But gradually I managed to get caught up in the struggle. I am glad that I managed to save half a point and stay in chances to win the tournament, but this game will definitely not end up in my best games collection.” 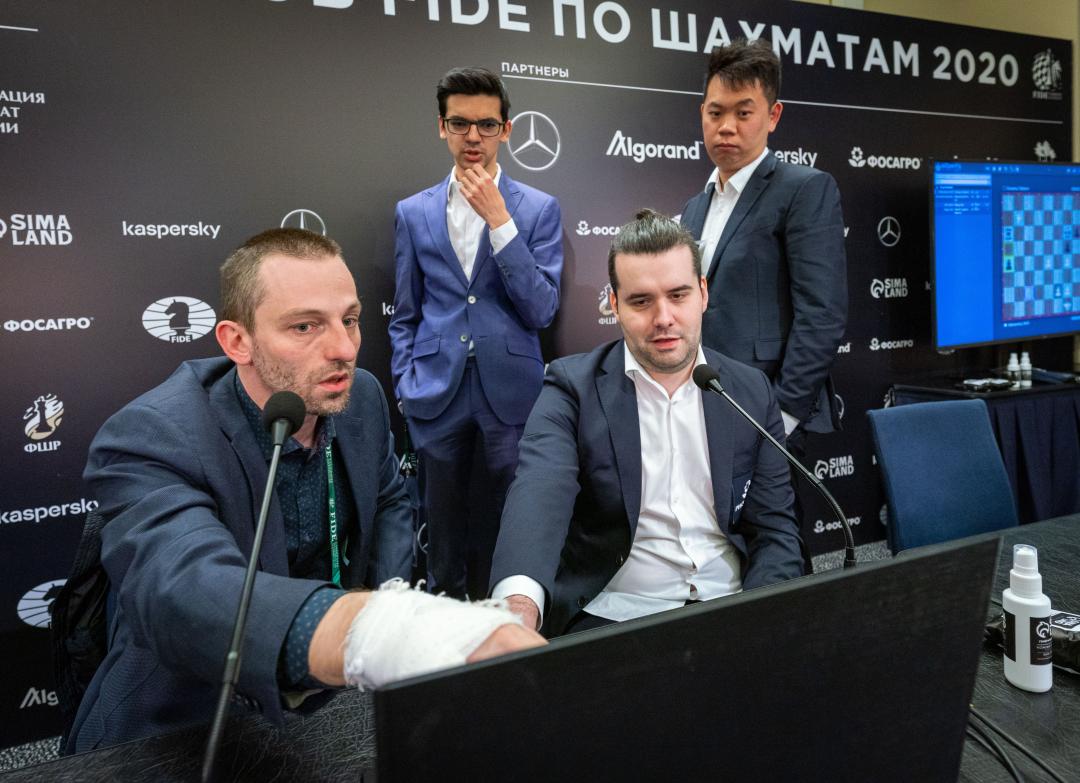 After suffering his first tournament loss yesterday, Grischuk looked to spice things up in an important match against tournament leader Nepomniatchtchi on Tuesday. Against a Grunfeld, Grischuk as White sacrificed a pawn to flex his central dominance with 10. d5!, which Nepomniatchtchi accepted with Bxc3+. He attempted to give the piece back on the next move, though Grischuk patiently waited to collect with the developing 14. Bc4 and prepared to exploit his connected central passer.

Nepo found his way through, however, to an endgame of scattered pawns collected by hungry rooks. Clearly drawn after 36 moves, the Russians fiddled for five more before agreeing to peace at the 41st move – the minimum per FIDE’s draw rules in the Candidates.

For a deeper dive into the games, watch the Round"> 9 Breakdown with GM Jacob Aagaard, or check back on CLO later Tuesday for Aagaard’s annotated Game of the Day.