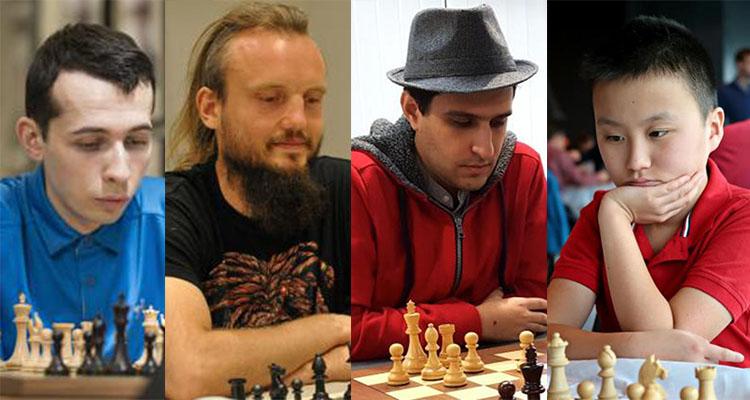 The final round of the US Chess Championship Online Qualifier begins today at 2:00 p.m. Pacific on Chess.com, marking the culmination of a month-long series of nationwide qualifier events designed to offer a new path to the national title.

The winner will appear in next year’s US Chess Championship.

Fighting chess is all-but guaranteed, with simply no room left for a draw. Entering the seventh round of the 8-player round robin, four players remain with chances to win the event – and all four are paired together.

GM Aleksandr Lenderman will take white against GM Timur Gareyev, both players in second place with 3.5/6 and a half-point off the lead. They chase 13-year-old IM Christopher Yoo, the only non-GM in the field and the tournament leader since the first round. He will command the black pieces against GM Elshan Moradiabadi, who also trails by a half-point with 3.5/6.

The US Chess Championship Online Qualifier began in November as an open Swiss event for the nation’s U1600 players and has progressed each weekend through a series of increasingly stronger events. Yoo entered in the 2400+ Swiss qualifier and then advanced through a 23-player final Swiss event, a final knockout bracket and now this final round-robin tournament.

Today’s final round to decide a 2021 US Chess Championship contender can be viewed with full commentary on Chess.com, as well as its YouTube and Twitch channels. First moves begin at 2:00 p.m. Pacific time. If necessary, a tiebreaker using US Chess Championship rules will be held Saturday.

Additionally, US Chess fans can join a free blitz side event with a dedicated prize fund of $500, open to members of the US Chess Members Only club on Chess.com. One random participant from any of the US Championship Online Qualifier events or any official side event will win a flight, hotel and entry into next year’s U.S. Open event, scheduled for July 31, 2021 in New Jersey.

Click through for a direct link to tonight’s blitz side event: Friday, December 18, 6:00 p.m. Pacific time