A four-corner battle between powerhouse chess clubs will take place on Thursday, April 23, as the Mechanics’ Institute in San Francisco, the Marshall Chess Club in New York, the Saint Louis Chess Club, and the Charlotte Chess Center will take part in a club versus club blitz showdown that will be played on Chess.com. Games begin at 4:45pm Pacific time and 7:45pm Eastern. 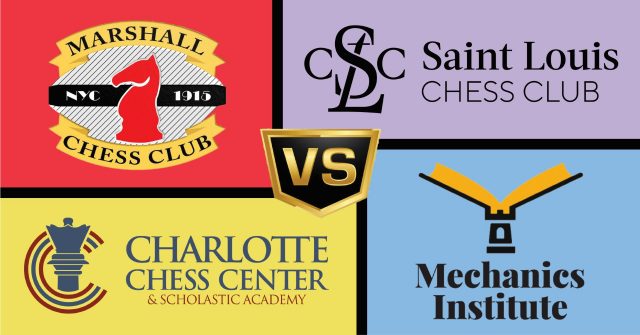 The format of the match will see each club playing each other with a time control of G/8 +2, with players having the same opponent from the other team twice, once as white, once as black. Match points will be the tie-breaker, should there be a tie. Each team will have a GM, and then have four players from each of the following categories, based on their April US Chess standard rating: u2400, u2200, u2000, u1800, u1600, and u1400. The goal is for the match to represent the entirety of the community of the club as a whole and for our communities to engage with each other in the spirit of friendship, competition, and sport. It is a match that includes the two most historic clubs in the country (Mechanics, founded in 1854; and the Marshall, founded in 1916) and the two modern powerhouses (Saint Louis, Charlotte), with Charlotte Chess Center being the USCF Chess Club of the Year in 2019 and Saint Louis the center of major chess in the country right now. This match will have it all, including big names and many of the nation’s top scholastic players. The Mechanics’ Institute will be led by legendary GM James Tarjan, who famously toppled Vladimir Kramnik at the Isle of Man in 2017. Rounding out the top five for Mechanics’ are FM Jason Liang, FM Eric Yuhan Li, NM Vyom Vidyarthi, and NM Ruiyang Yan. The Charlotte Chess Center will have their Grandmaster in Residence GM Daniel Naroditsky as their top board, with NM Tianqi Wang, FM Benjamin Moon, FM Peter Giannatos, and NM Karthik Rangaragan leading the team. Saint Louis will have GM Jeffery Xiong at the top, with NM Forest Chen, IM Dorsa Derakhshani, NM Julian Proleiko, and NM Nicholas Rosenthal in their top five. The Marshall will field a team with GM Djurabek Khamrakulov, NM Merrick Hu, NM Paris Prestia, and NM Matan Prilleltensky among their players. “We have been organizing online club versus club events since last October. We feel this particular match carries significant meaning and importance not just because of the clubs involved, but because we feel fortunate that we are able to keep our communities together through chess and especially through partnerships like this,” according to Abel Talamantez and Dr. Judit Sztaray of the Mechanics’ Institute. This collaboration would not be possible without the hard work in organizing and mobilizing the chess community, so many thanks to Bryan Quick from the Marshall Chess Club, Grant Oen and Peter Giannatos from the Charlotte Chess Center, and Tony Rich and Mike Kummer from the Saint Louis Chess Club. Their friendship and partnership over the last few months in organizing online events for the players has been truly amazing, and we hope the match will be fun for viewers to follow and cheer for their favorite club and players.

The match will be streamed through these channels: https://www.twitch.tv/mechanicschess Bf7TdqvnrBc&app=desktop">