FM Resika on US Senior: Singing and Chess are Icing on Cake 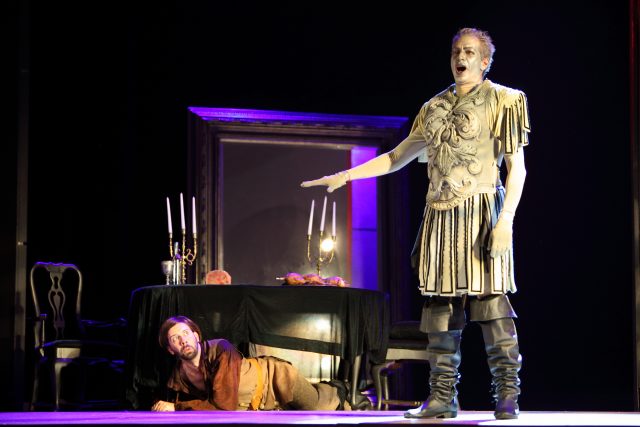 Nathan as the commendatore in Don Giovanni. He has played all four male roles in the opera
FM Nathan Resika is a former US Senior Champion, an opera singer who recently performed at Carnegie Hall and a father of twins (Happy Father’s Day Weekend!). He writes about his plans to participate in the Upcoming US Senior in New Orleans next weekend, from June 21-24, which with the first annual National Tournament of Seniors of Champions (July 28-31) promises an exciting summer of National Senior’s competition. Here Nathan shares his thoughts on preparing, age-related issues, the importance of a positive attitude, as well as his insights into music helping chess and vice versa.   I love chess.  That’s why I am willing to accept the sub par play that may come after a layoff; that horrible blunder that may occur in the first few games one plays; before getting one's bearings back.  I also surround myself with positive people. I refuse to listen to the negative voices that assume you are finished because of some losses to talented juniors. Instead I look to people like Grandmaster James Tarjan, who after a 20-year chess hiatus outfoxed and beat Vladimir Kramnik, a top contender and former champ 400 points higher rated and almost 25 years younger. Or Victor Korchnoi who played fantastically into his late 70s.  This just doesn’t happen in other sports.  I could go on and on with  examples.  Let’s just say that we have to maximize what we gain with age that energetic youngsters don’t have, and that is Wisdom. And perhaps patience.  In Both Chess and Opera, statistics said I was too old to do what I did. But, I've spent my whole life defying statistics; to quote Mark Twain "There are lies, damn lies, and statistics." For final inspiration before we get down to chess talk, another Twain quote:

Music and chess both take an enormous amount of work.  You have to put in the lonely hours translating, memorizing and reciting your music till it is ready to dazzle, inspire, and move the public. Chess players know they have to work very hard to understand this game and you will only get out of it what you put into it. I think the work I did in music helped keep my mind sharp for chess work, and vice versa. I also believe that music complements chess in that it is directed outward while chess is directed inward. Deep breathing techniques necessary for singing helped my posture immensely, while chess can tend to make one slump at the board if not careful. Allow me to elaborate on the methods that have worked for me.  When I came back after seven years off, at 50, I inspired myself by changing my openings. I had always been an 1.e4 player. I decided to enlarge my chess understanding by switching to 1.c4 and 1.Nf3.  I chose John Donaldson's classic book A Strategic Opening Repertoire. I read it till it fell apart, whereupon I picked up the revised version by Donaldson and Carsten Hansen.  That has now fallen apart and is completely dog eared too. I'll let you in on a couple of my secrets: 1. When you finish a great book, read it again  2. Follow Petrosian’s advice: try to follow games in book without a chess set! It helps you visualize better during a game. 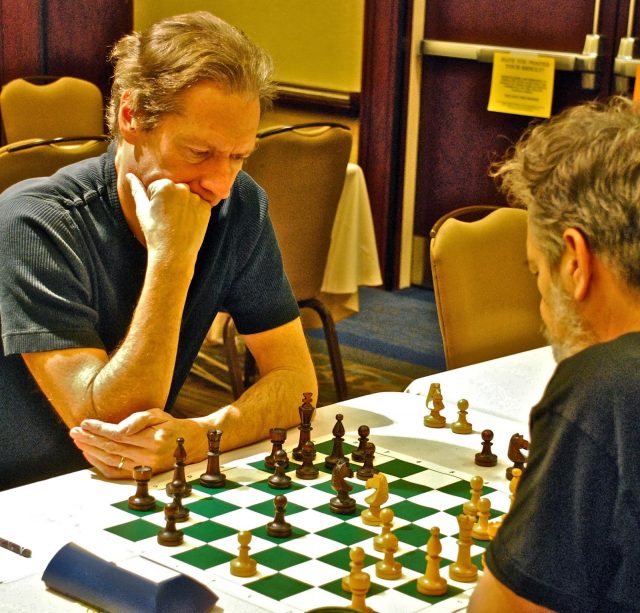 Nathan Resika, Photo Boylston Chess Club
I’ve had so many smooth strategic wins playing this repertoire. Ulf Andersson made the amazing tactician John Nunn look like an amateur in these systems: Yasser Seirawan handled Mikhail Tal with ease in several similar games, which you can find in Yasser's great book Chess Duels.  Even the legendary NY sage IM, and all around great guy, Jay Bonin, could fall victim and get lulled into complacency by this subtle system I also studied what I think were the best opening books ever written: Mihail Marin's three volume English opening series from Quality chess. These are truly inspiring books that you can tell were a labor of love. Volume 1 will not just teach you about the English (1. c4),  but will teach you about high level chess in general. I also recommend Neil Macdonald’s "Starting Out: The Reti" and "Starting Out: the English.” To really master Nf3 and c4, I deeply researched the games of Richard Reti and Howard Staunton. These systems of play keep all the pieces on the board and place a priority on planning and pawn structures.  My games went on far longer than when I played e4. But I always seem to have more of an understanding of what was going on. Now I am preparing some new stuff, but I won’t give it away just yet. I’m an old fashioned player and much prefer books outside than computer screens inside.  I almost never played any blitz during my chess comeback. Not even to test my new openings. I'm more from the Botvinnik school on this topic. Blitz can be great fun, but I liken it to tweeting as opposed to writing a well thought out essay. In the limited time I had between my family and music and chess, I  focus on study and real tournament play, mostly at the Marshall, with the time control of G/90 with a 30 second increment. One disadvantage of aging is that you might have to deal with serious health issues more often. This happened to me and put me out of action for three months this year. This can give you a new outlook on life. I now treasure every day with my family and am just grateful to have good health. Singing and chess are just icing on the cake. Finally, I think we should all have goals to spur us on. Your goal can be just to enjoy chess and play purely for that. Other seniors may aspire to becoming grandmasters by winning the world senior championship, as GM Larry Kaufman did.  I’ll admit that is one of my goals.   My esteemed late colleague Ilye Figler got his IM title at 63, yet only had 7 years to enjoy it before his passing; so let’s give the village elders the respect that is due. I wish you all the best of luck in your chess goals, whatever age you may be. If you are over 50, I hope to see y'all in New Orleans next week! I am not making any predictions, but plan to have a great time.  I’ll report more after the event. Find more information on the US Senior, along with the US Junior Open that it coincides with on the CajunChess website. 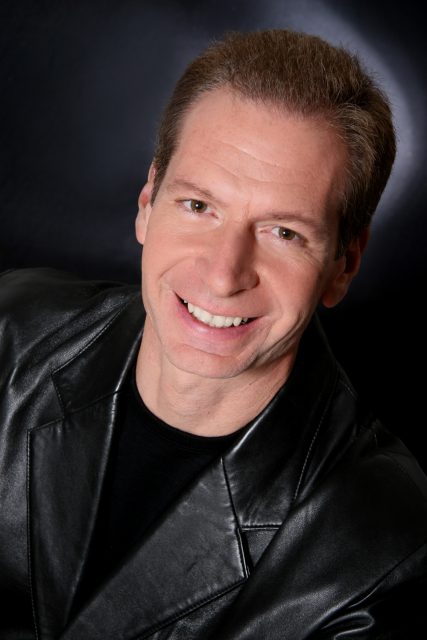 Nathan Resika started tournament chess at age 24, made master at 31 and FIDE Master at 40. In 2003, he stopped playing chess to focus on becoming a professional Opera singer.  He has performed over 30 roles from memory in 7 different languages.  In 2011, he got back into chess and, in 2013, he achieved his best results ever: tying for 1st in the US Senior Champs, winning numerous first places at the Marshall Chess club, and doing well in several tournaments in Budapest. After taking another couple years off from chess,  Nathan's back again. At the 2017 Eastern Open in DC, he won the first Brilliancy prize as well as the opening innovation prize. As a singer, he achieved one of the highest goals in June 2018, performing as bass soloist at Carnegie hall in New York City. Find his YouTube clips on his website www.resika.com He lives in Valhalla NY with his wife and 11-year-old twins.
SHARE: