A Fitting End to a Fine Event

There’s a very different feel to the U.S. Juniors (and now Seniors) than is found at the U.S. Championships. It’s not that one is more serious than the other, not exactly. And it’s not quite that the junior and senior players are less serious, because let’s be clear: every single one of the thirty players here at the Junior, Girls, and Senior Championships is utterly, deadly serious about their chess. What’s different, I think, is the camaraderie and bonhomie. Our top players are all business when playing in the Open and Women’s Championships. Many, if not most, are active professionals, fighting for an impressive cash purse and World Cup bids. They show up at the Club, they play their games, and it’s then back to the hotel to rest and prep for the next day. Photos from the three Championships this week in Saint Louis paint a different picture with the junior and senior players. They come in to play with and against their friends, having built relationships on Olympiad teams and scholastic championships, in group texts and Goichberg swisses. They hang around in the Club basement after their games end, kibitzing and carousing, laughing and ‘Puzzle Rushing.’ 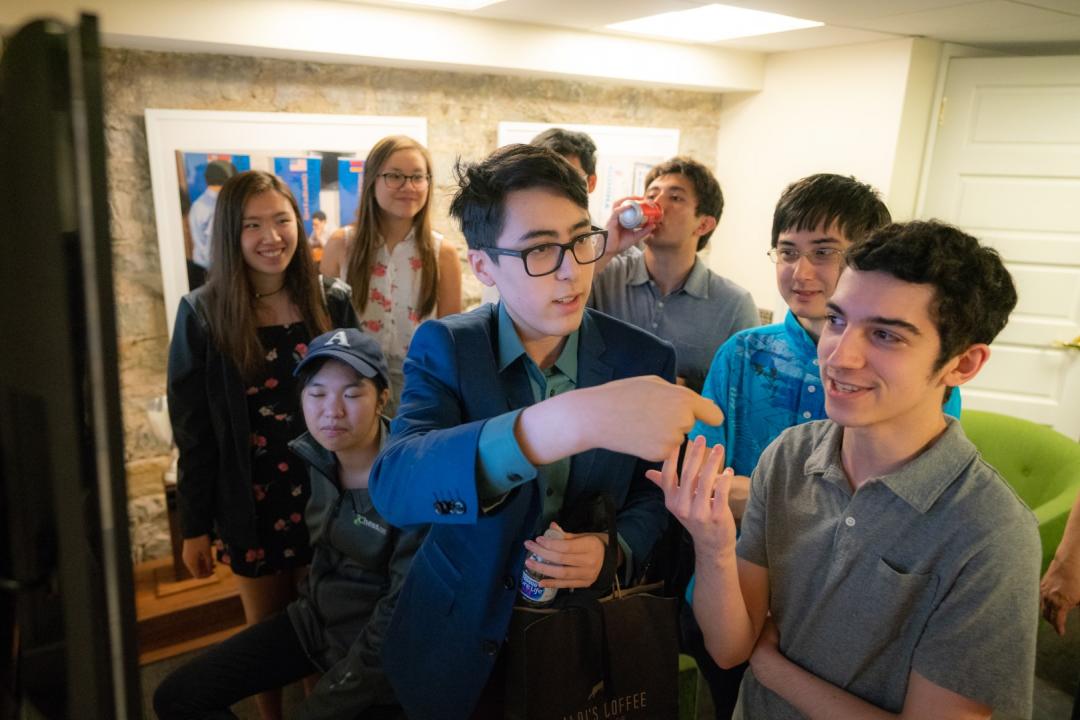 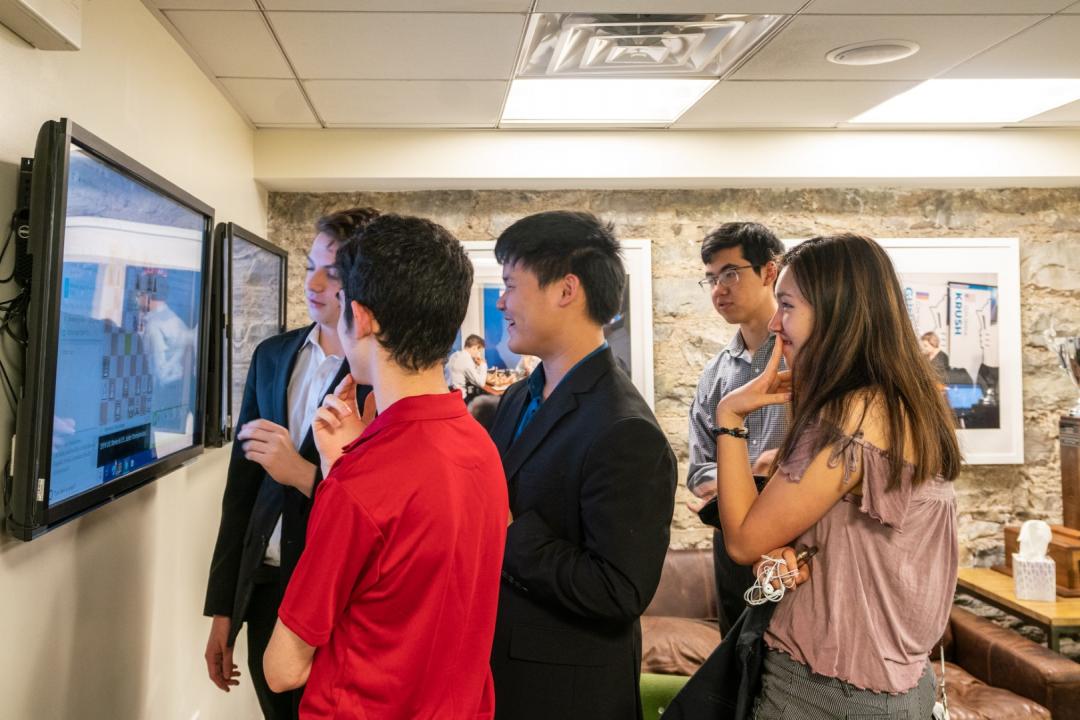 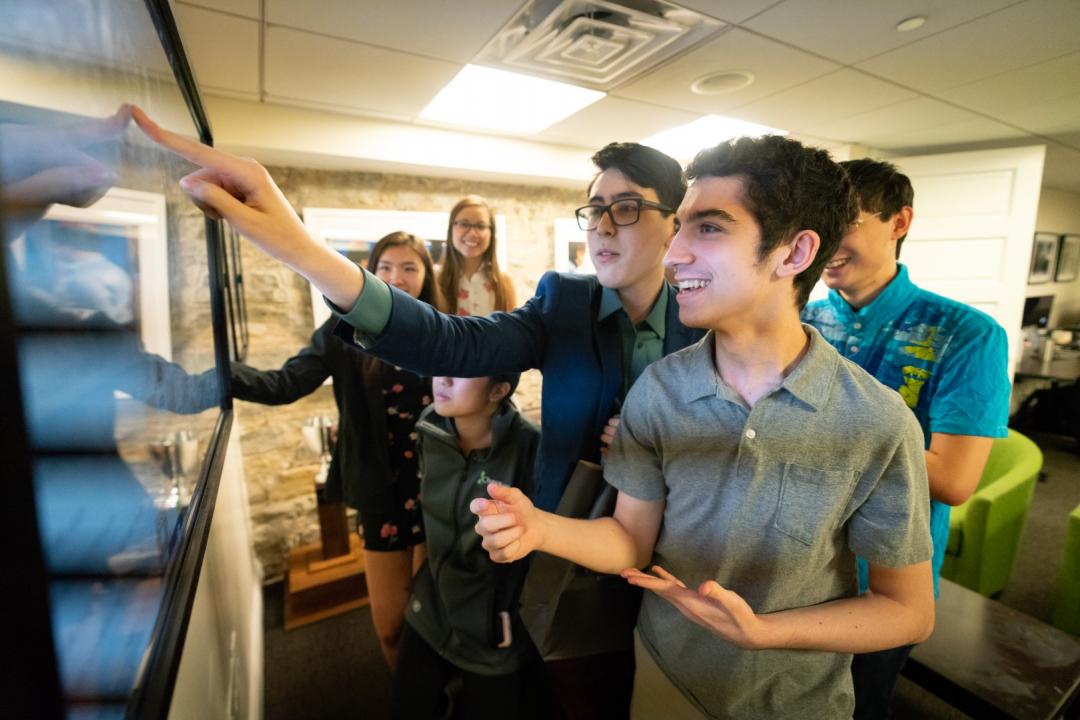 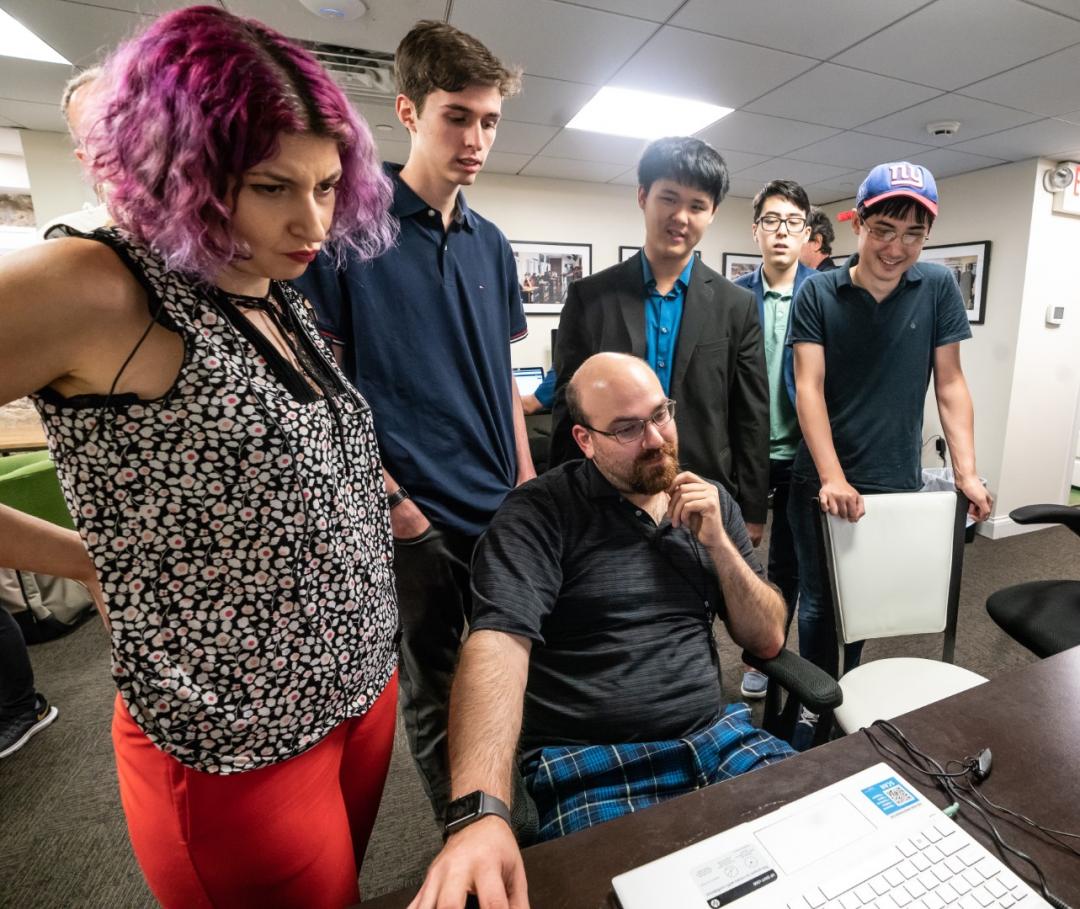 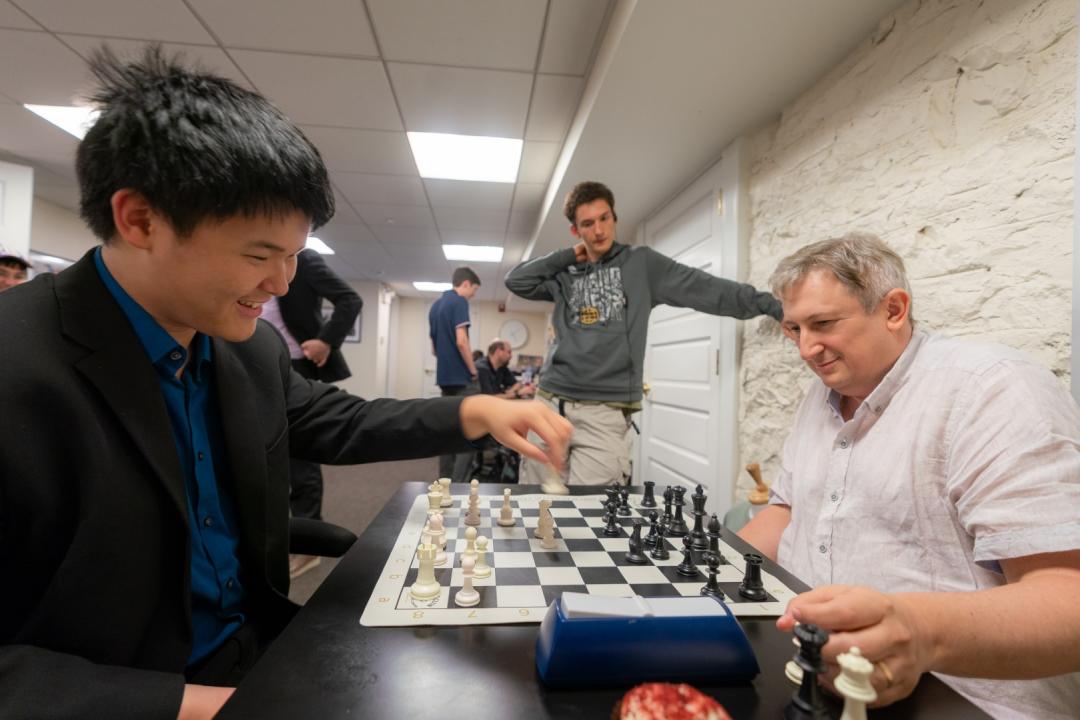 Liang and Dlugy blitz it out (photo Eric Rosen) 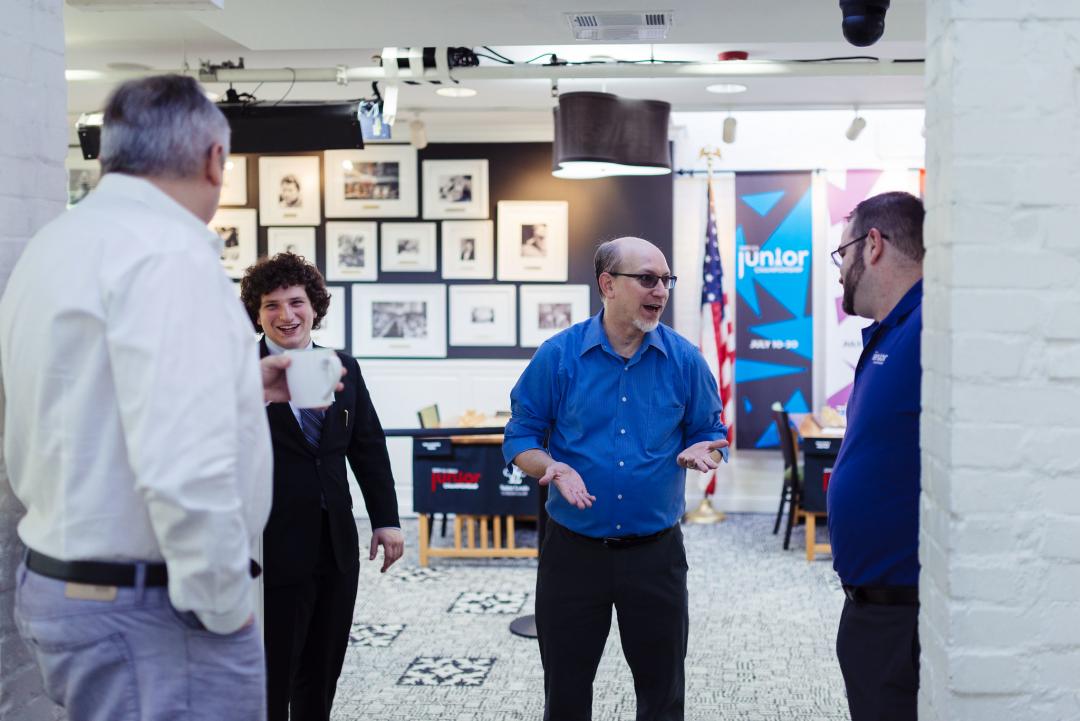 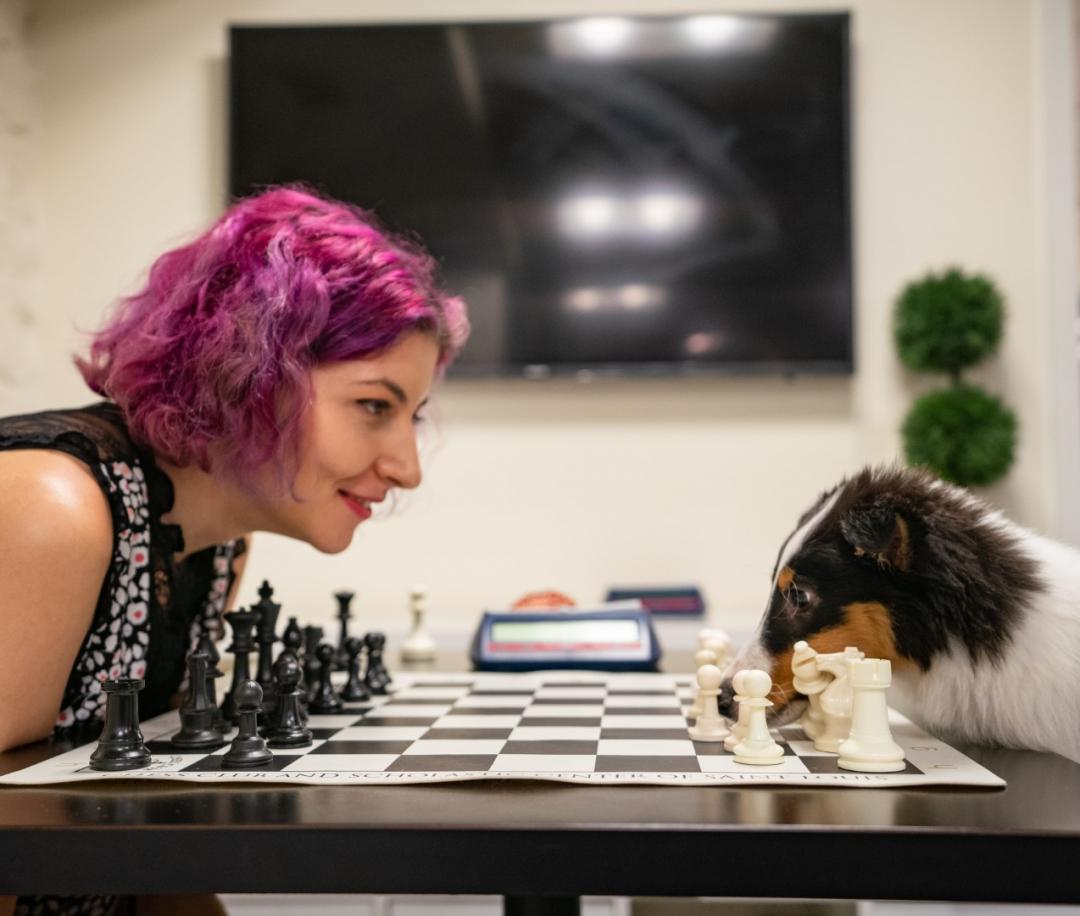 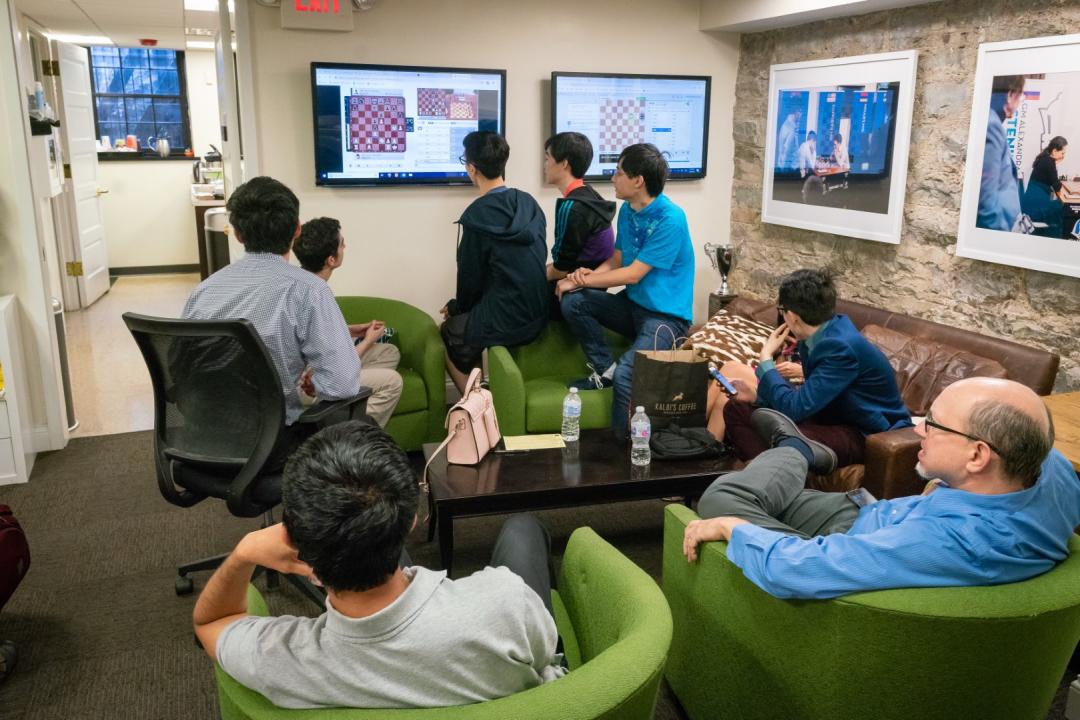 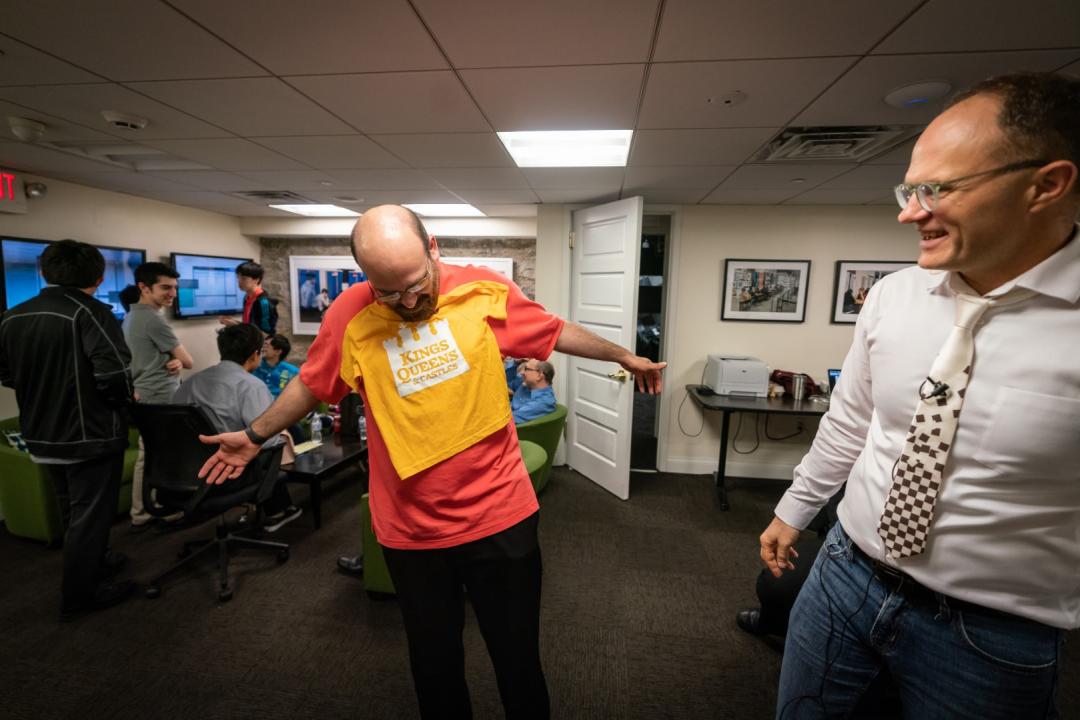 It doesn't fit. (photo Eric Rosen)
This is a seriousness leavened with the levity of youth and the wisdom of experience. This is a seriousness that knows for all of the competitiveness intrinsic to high-level chess, our game is just that – a beautiful, maddening, absolute rabbit-hole of a game. To the traditional Junior and “newish” Girls’ Junior Championships, US Chess and the Saint Louis Chess Club this year added a third event. The 2019 U.S. Senior Championship, open to players 50 and above, gave some of America’s ‘more seasoned’ champions the chance for another day in the sun. Having the juniors and seniors in the same place made for fascinating contrast, in terms of openings, playing style, and particularly in the post-game interviews for the livestream. I had chance to watch quite a few of them as I worked on my round reports, and what stood out to me, more than anything, was the difference in how the juniors and seniors analyzed their games. The seniors talked in broad strategic themes, identifying weaknesses, pawn breaks, ideal endgame schemata. Concrete variations were situated in broader insights. Meanwhile the juniors machine-gunned rapidfire analysis, line after line after line. This is a generalization, of course, but the generational gap, the difference between the pre-computer and post-engine worlds, showed itself in stark contrast. I hopped an early-morning flight from Omaha to Saint Louis to witness the final day action, arriving at the Club with about 20 minutes to spare. If you can make the trip, do so. Watching events like these on the livestream is awesome (in the traditional sense of the word), but there is no substitute for getting to walk up those stairs and see elite players ply their trade. 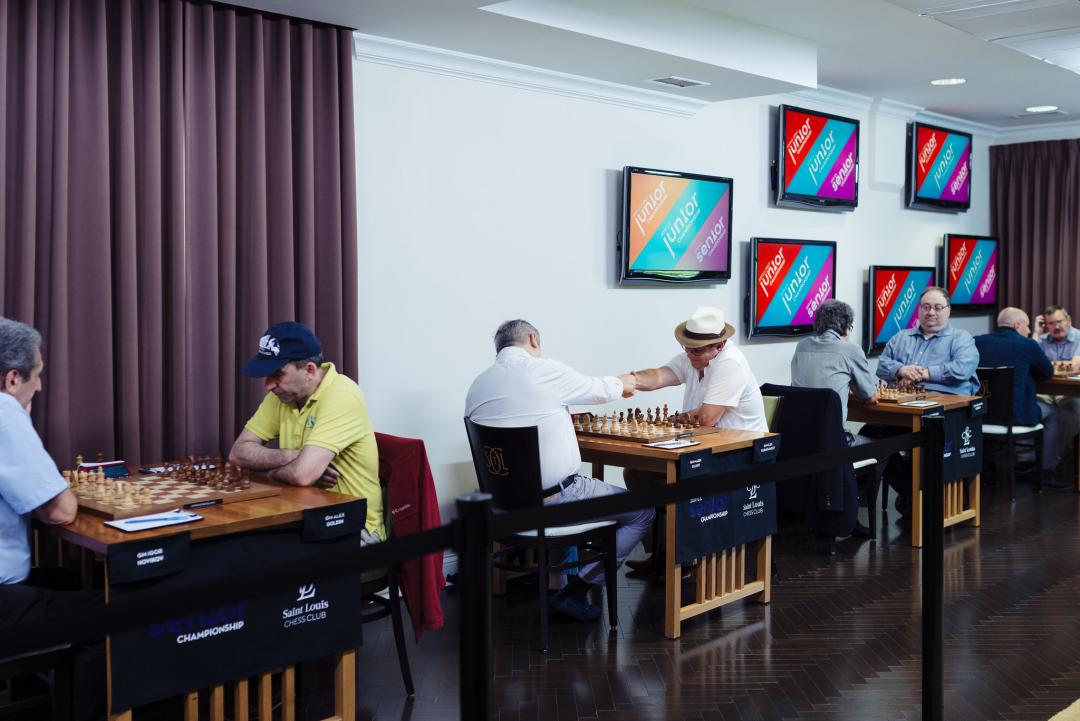 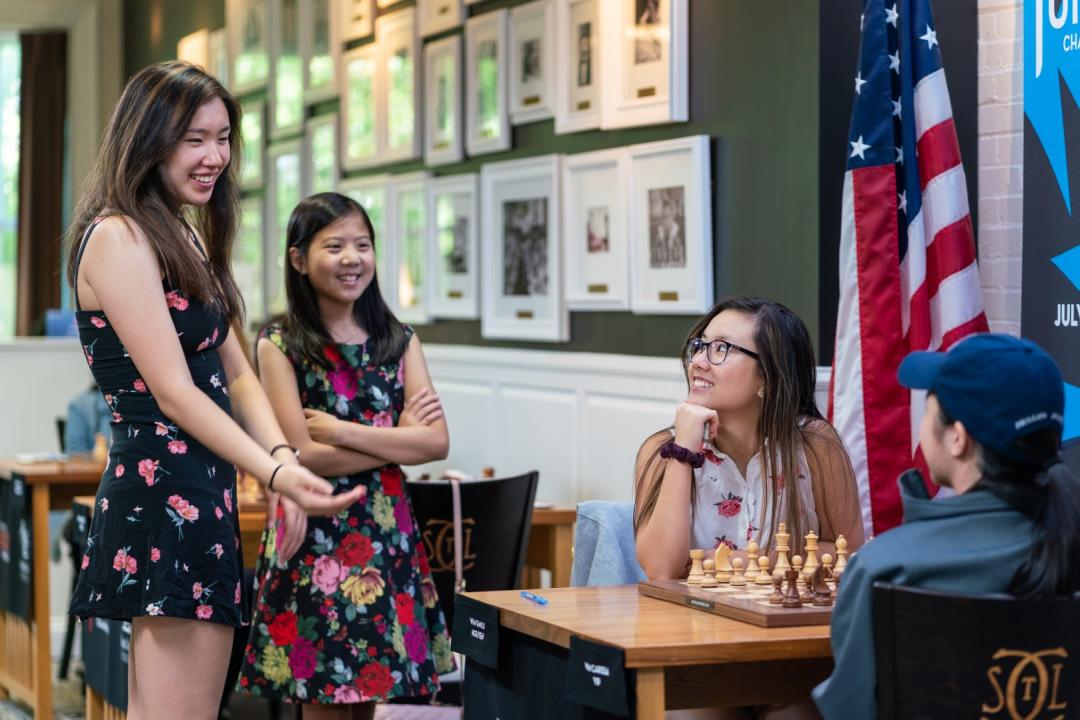 Yu, Wu, Nguyen, Yip (photo Eric Rosen)
The Juniors, Girls, and Seniors each played in one of the three ‘halls’ on the second floor of the Club. The Juniors and Girls were all socializing before the round began. Hans Niemann was talking about something being ‘money well spent,’ and Jennifer Yu was over on the Girls side, huddled with her friends. For their part, the Seniors were seated, serious faces all around, looking like adults who know the importance of prize money and mortgage payments. With both Carissa Yip leading the Girls Championship and Alex Shabalov leading the Senior by a full point heading into the round, most of the attention was focused on the Junior Championship, where Nico Checa and Awonder Liang were tied at the top of the table. The thought was that Shabalov and Yip would draw quickly, ensuring their titles, while Checa and Liang would have to play their games with one eye on each other’s boards. Shabalov quickly fulfilled his end of the bargain, carefully working his way to a draw against Jaan Ehlvest in just over the minimum 30 moves. This earned him $12,000 for first place in the Senior Championship. 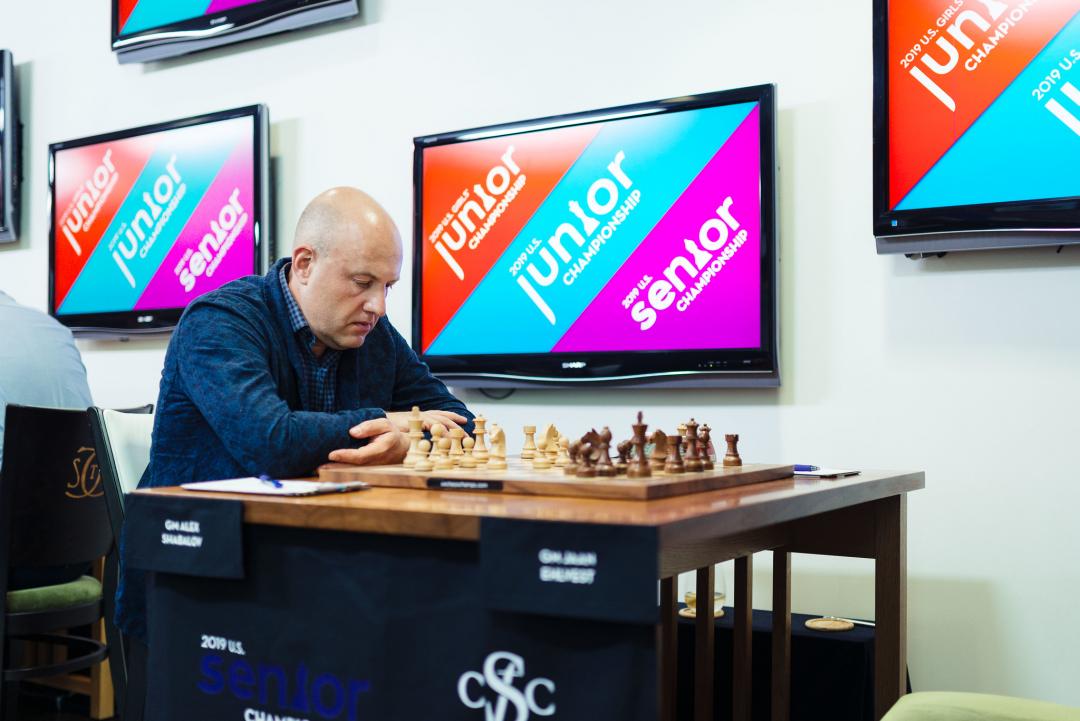 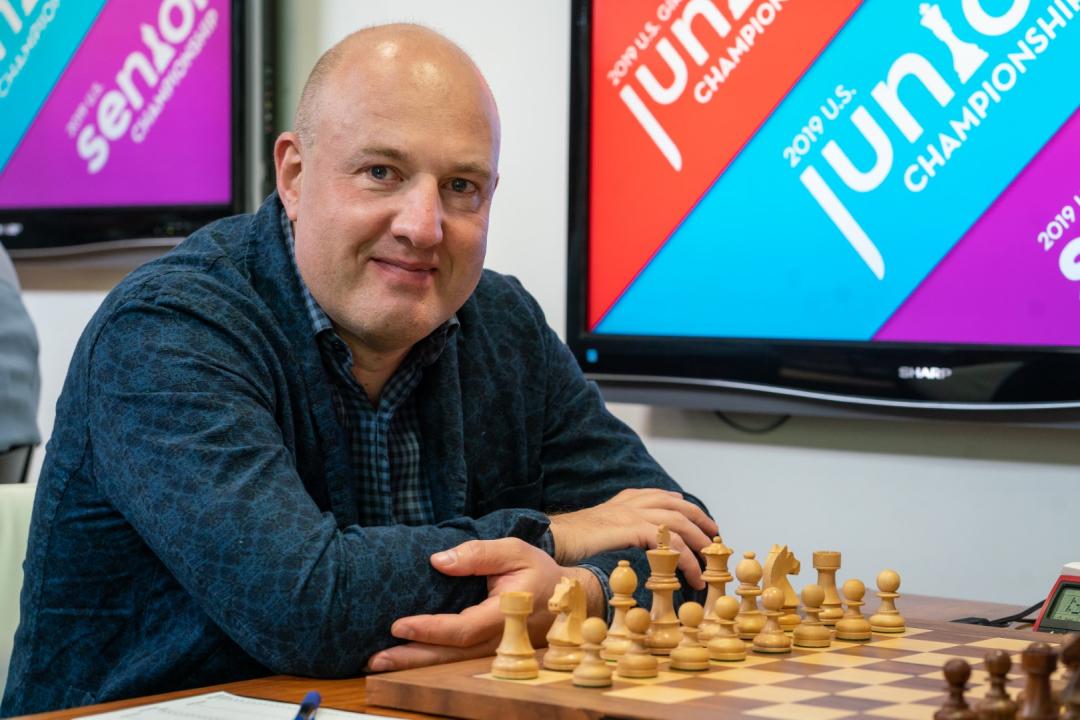 Alex Shabalov (photo Eric Rosen)
Yip had to do a bit more work to earn her second Girls’ Junior title. Playing Black against Emily Nguyen, Yip found herself in a worse position in the middlegame, but managed to work her way back to a draw… even if it looked a little dicey at times! 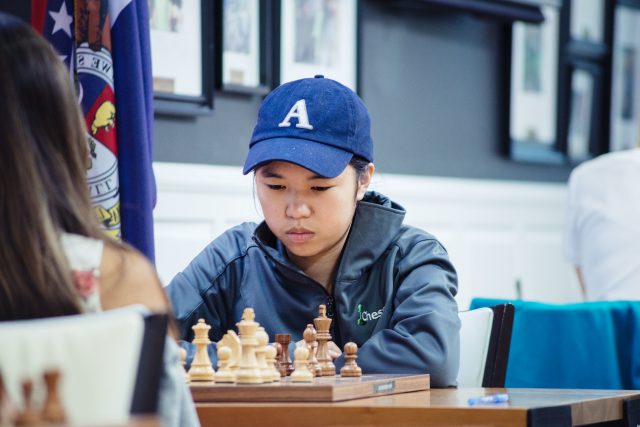 Carissa Yip (photo Crystal Fuller)
For her efforts, Yip received a $3,000 first prize and a $10,000 scholarship to the college of her choice from the Dewain Barber Foundation and US Chess. This left the matter of the Junior Championship, where Nico Checa had Black against Hans Niemann, and Awonder Liang played with White against Andrew Tang. By 2pm – the round started early at 11am to accommodate a potential playoff and closing ceremony – Checa had drawn with Niemann, opening the door for Liang to take the title by winning against Tang. 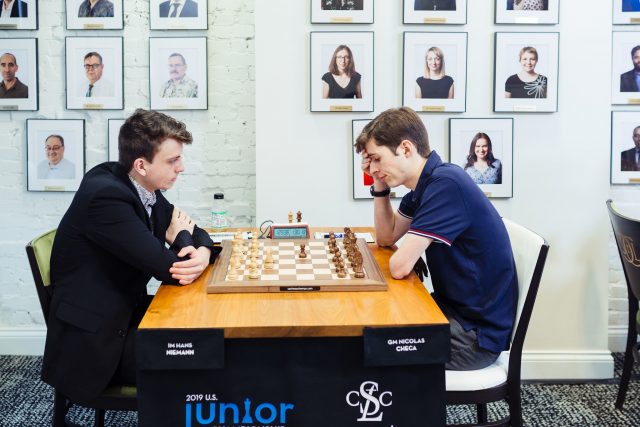 Niemann-Checa (photo Crystal Fuller)
Andrew Tang, however, had other ideas. He managed to get a winning position before missing an equalizing shot on move 35, one that Liang grabbed like a life preserver. Their game was drawn at about 2:35pm, setting up a playoff between Checa and Liang at 5pm. 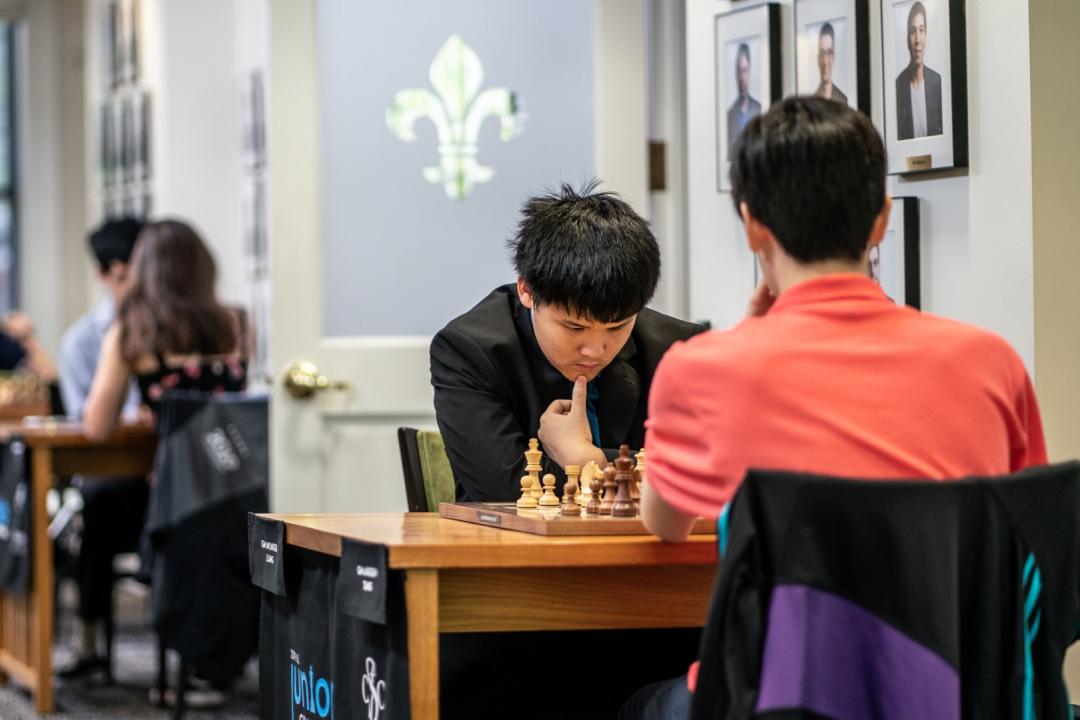 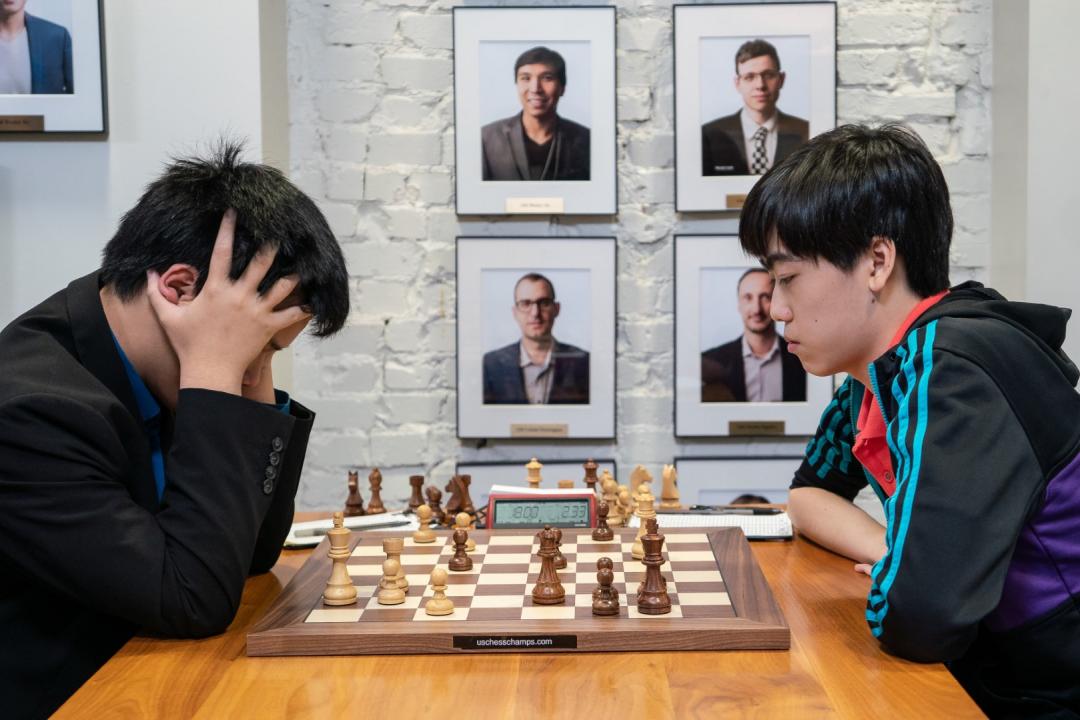 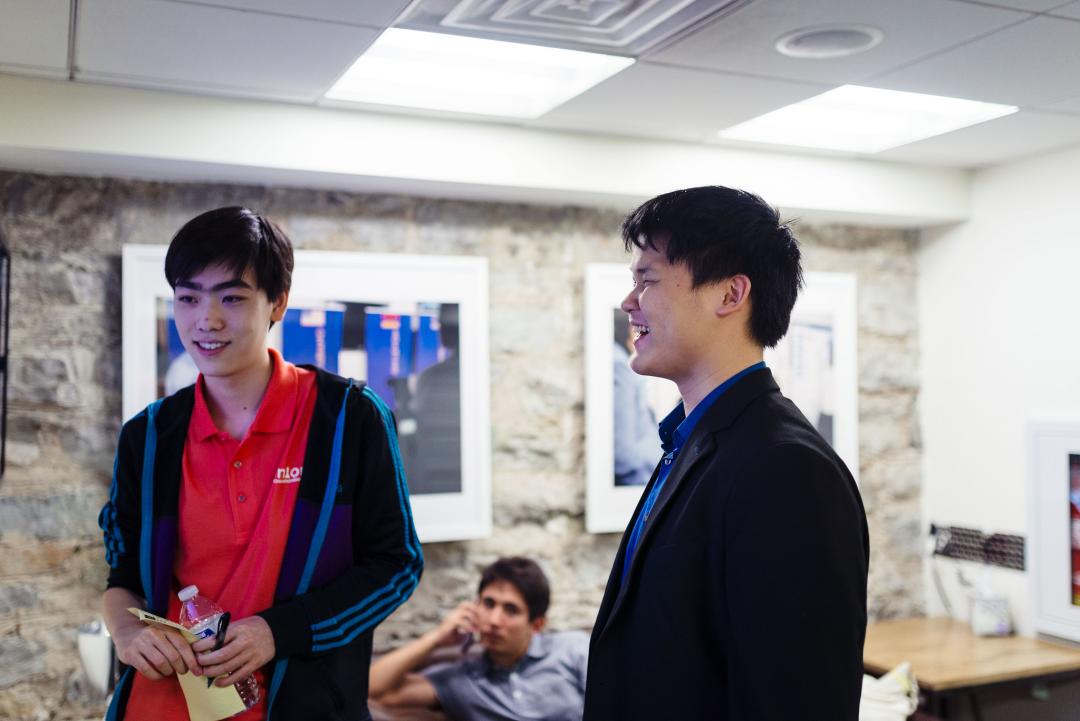 Post-game analysis (photo Crystal Fuller)
It is a bit of a shame that the playoff overshadowed some of the outstanding games played in the final round. The last two games to finish, for instance, made for terrific TV. Could Larry Christiansen find a way to convert against Joel Benjamin? Would Veronika Zilajeva mate Rachael Li with bishop and knight within 50 moves? (The answer to both questions, by the way, was yes.) 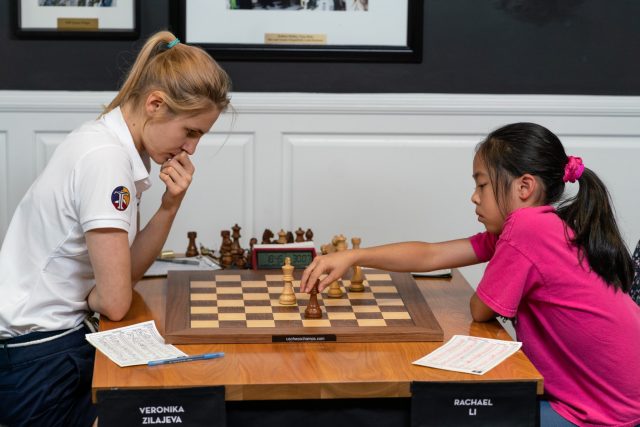 Zilajeva-Li (photo Eric Rosen)
Still, I think it fair to say that attention downstairs at the club waned a bit as we waited the two hours for the playoff. Club regulars banged out blitz games. Staff members gave lessons. And I spent a bit of time with two young players from New York, whom I tortured with mate in twos. 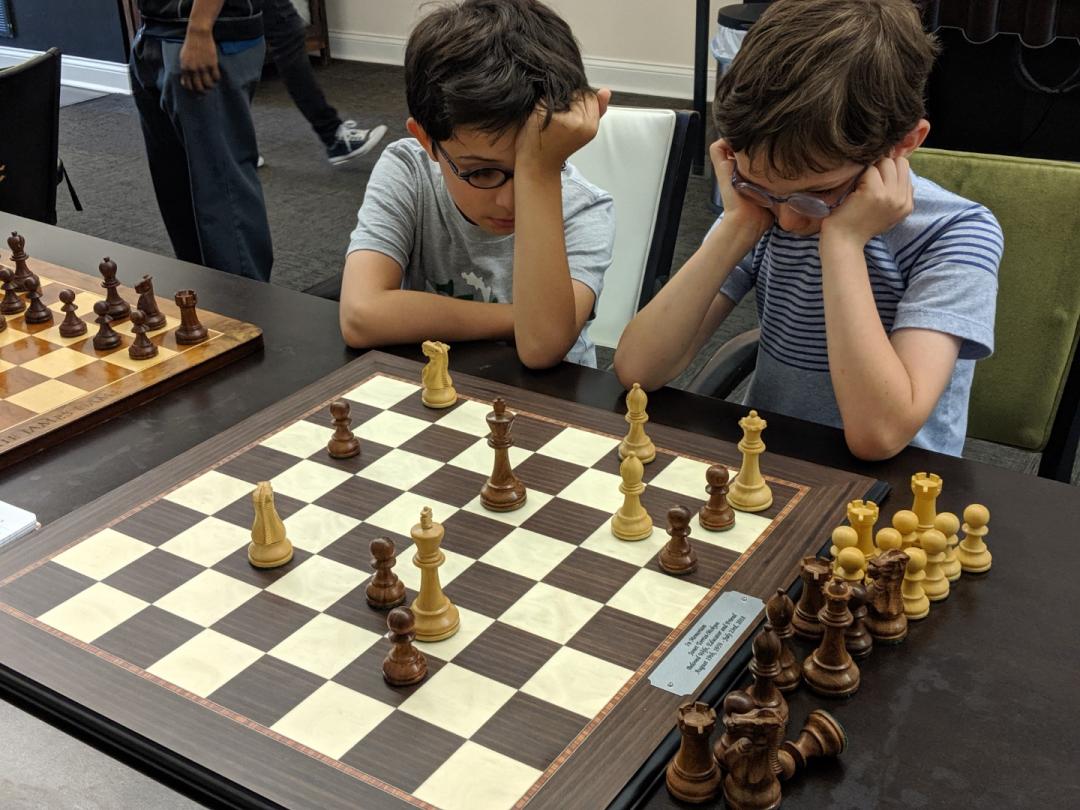 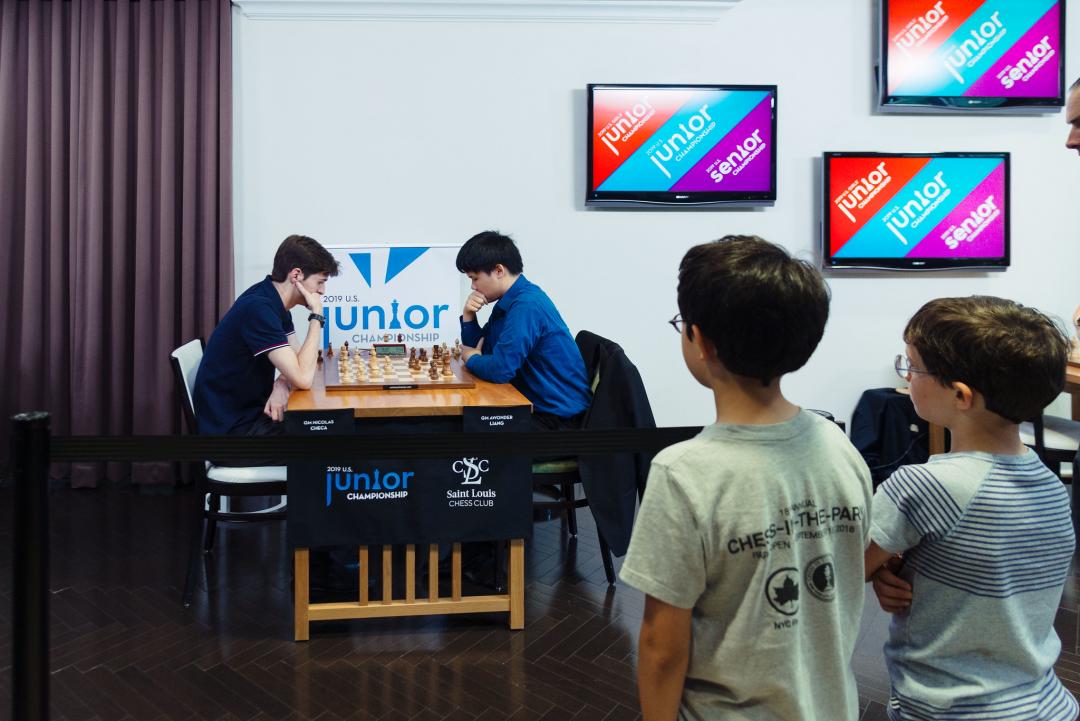 The Cacciatore Boys watch the Playoff (photo Crystal Fuller)
Luc Cacciatore (9) and his brother Max (“almost 7”) are competitive and ambitious. Studying with Coach Angel (Lopez) and Coach Shawn (Martinez) from Impact Coaching Network – the same outfit that helped Tani Adewumi reach such famous heights this spring – the boys play tournaments almost every weekend, their mom told me, and they just finished a camp in NYC with Sam Shankland. The boys challenged me to blitz, but discretion being the better part of valor, I demurred, preferring to challenge them to solve some mate in twos. “This’ll be easy!,” the boys boasted. They were wrong. Here’s an example of the cruelty I inflicted upon these brave young lads. It’s the position shown in the picture above. Soon Luc and Max were bounding up the stairs to watch the remaining games, having heard my admonition “don’t move the pieces to solve it!” one time too many. I grabbed a chair and a coffee, fired up my laptop, and got ready for the playoff to begin. I wasn’t alone. Mysteriously, almost imperceptibly, friends and fans filled the first floor of the Saint Louis Chess Club as Checa and Liang began to play. Rex Sinquefield appeared, taking his customary seat right in front of the big screen. Veronika Zijaleva sat right behind him. Behind me was the "circa-1976 Junior Spartakiad” team of Max Dlugy, Jaan Ehlvest, and Alex Yermolinsky. 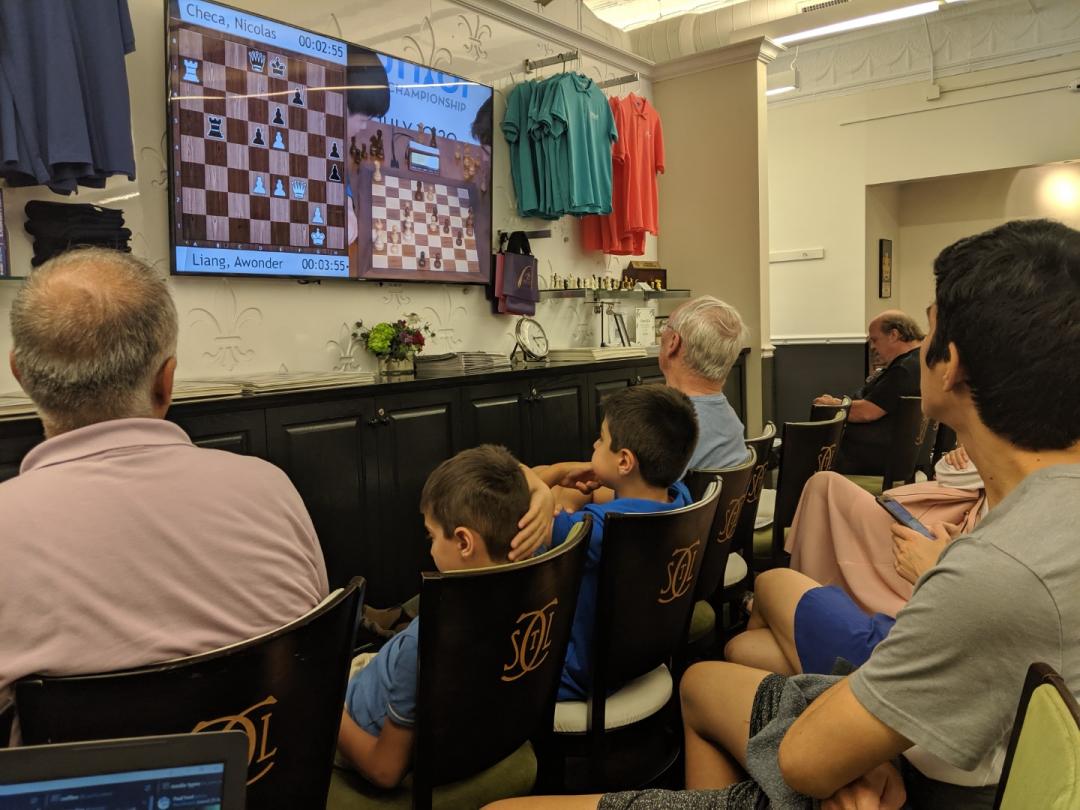 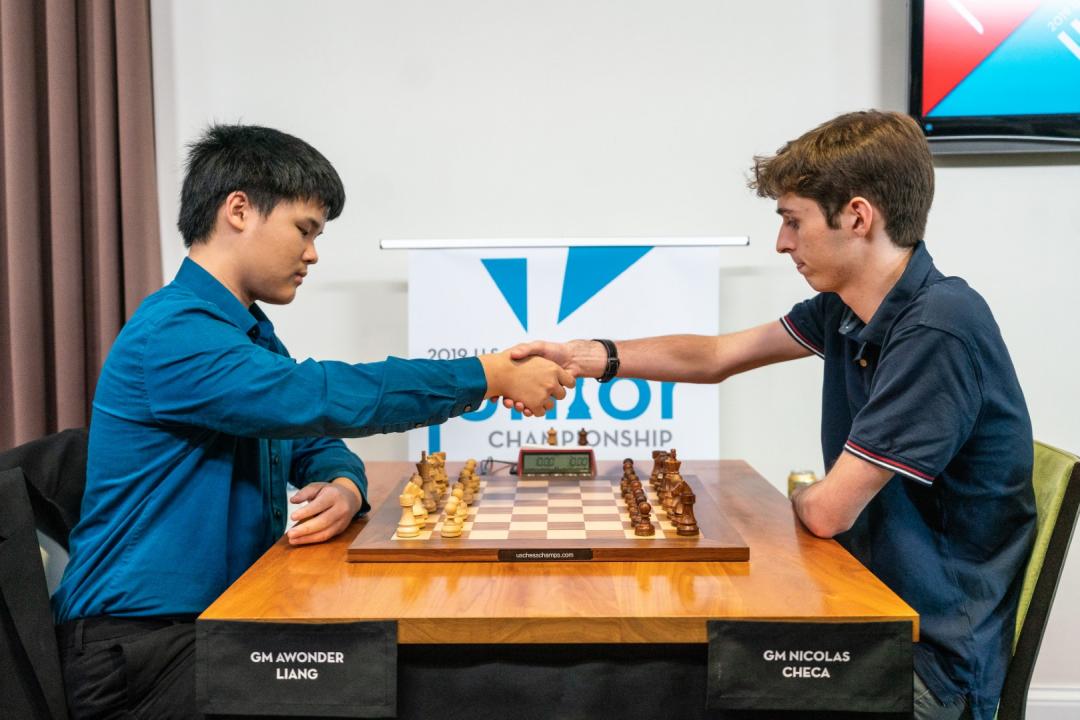 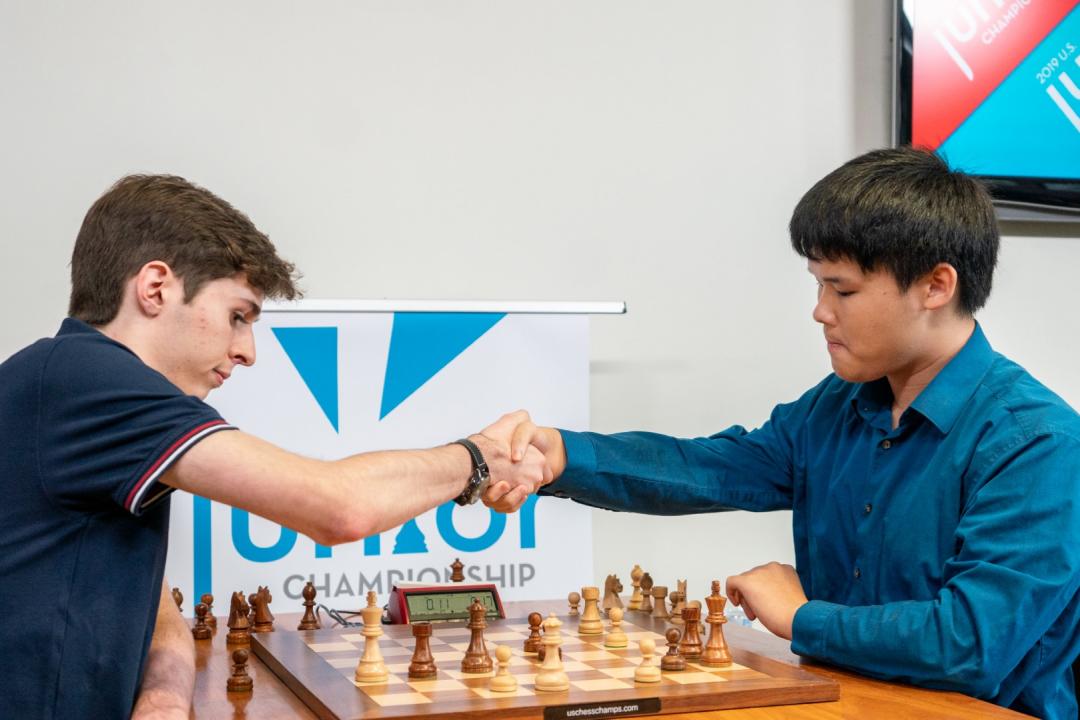 Liang wins! (photo Eric Rosen)
As things turned out, and as CLO readers already know, Liang won both rapid games to win the tiebreak, giving him the title of U.S. Junior Champion for the third consecutive year. With this comes a seat in the 2020 U.S. Championship, a $6,000 first prize, and a $10,000 scholarship courtesy of the Dewain Barber Foundation and US Chess. With the tournament finally over, the first floor emptied just as quickly as it had filled. The players rushed down the street to the Closing Ceremony for dinner and age-appropriate beverages. And then? https://twitter.com/IMCryptochess/status/1152714588225515520 Age against youth. Experience against energy. And always, always, always bughouse. A fitting end to a fine event. I'm very much looking forward to next year’s edition. US Junior/Senior/Girls Quick Links:  Official STL Chess Club YouTube Live on uschesschamps.com  Pairings & Results US Junior Pairings & Results US Senior Pairings & Results US Girls
SHARE:

There is another difference paramount..fantastic serious on scene eyewitness reportage by Mr. John "the review' Hartmann. I could hardly believe my eyes. YOU ARE THERE.. We are all grateful. Chess is not a joke and gets its seminal sentinel..an hour by hour night watchman. Oh how sweet it is. Jude Acers/ New Orleans
One correction -- You wrote that "Yip had to do a bit more work to earn her first Girls’ Junior title." But Carissa was defending her title. 2 in a row!
You are correct! I've fixed it!
I've noticed that in the past three years the organizer's wildcard has gotten last place in the junior championship (Joshua Colas in 2017, Annie Wang in 2018, Jennifer Yu in 2019, all at least 1.5 points behind 9th place). This should probably be a warning signal to the organizers to start picking better and more competitive wildcards in the future...
Woman Grandmaster-elect Carissa Yip will be the special guest on the August edition of "Chess Chat," a TV chess series produced by the Wachusett Chess Club at Fitchburg State University in Massachusetts for Fitchburg Access Television (www.fatv.org). The program will be televised on Monday, August 5th, at 7 p.m. and can be viewed via live streaming at FATV's website. The program will also be available on video on demand. Carissa will present one of her decisive games from this year's U.S. Girls Junior Championship. The August "Chess Chat" will be shown five times a week on FATV and will be seen by local subscribers to the cable companies Comcast and Verizon.
[…] off her solid performance in the U.S. Girls’ Junior Championship, Martha Samadashvili is our 2019 Haring National Girls’ Tournament of Champions victor. She too […]