Alireza Firouzja won the 2022 Sinquefield Cup in a two-game Rapids tiebreak playoff with Ian Nepomniachtchi. There were no decisive games in the final round, so Firouzja and Nepomniachtchi tied with five points, a half point ahead of Wesley So and Fabiano Caruana. 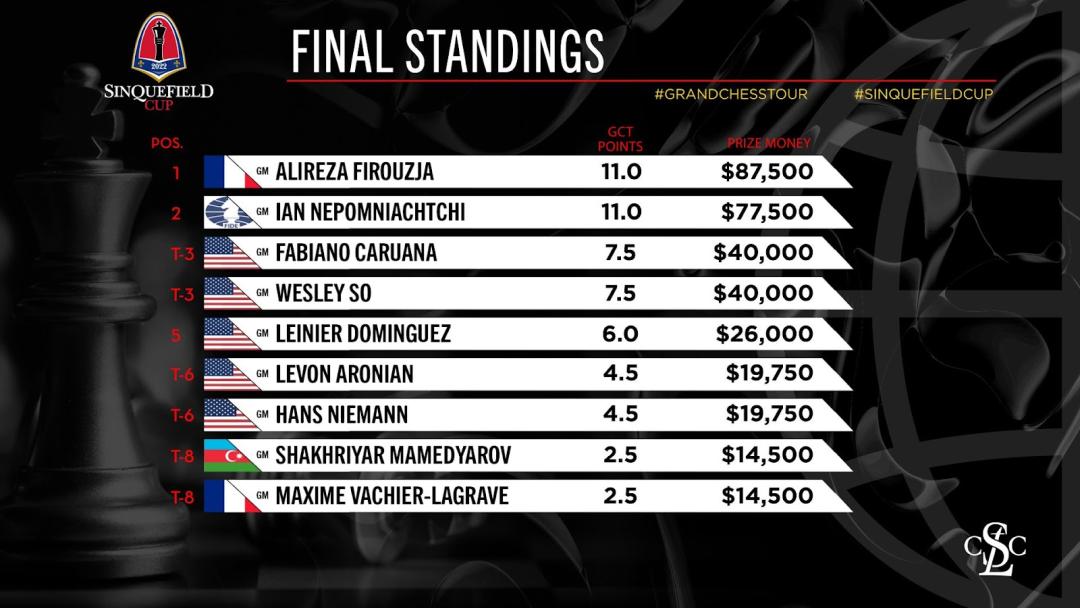 Leinier Dominguez Perez took clear fifth place with four points, a half point ahead of Hans Niemann and Levon Aronian, while Shakhriyar Mamedyarov and Maxime Vachier-Lagrave finished a disappointing last with three points. Recall that Nepomniachtchi had the good fortune that Carlsen’s withdrawal negated his loss to Magnus, while Niemann was unlucky that his win over Carlsen didn’t count. 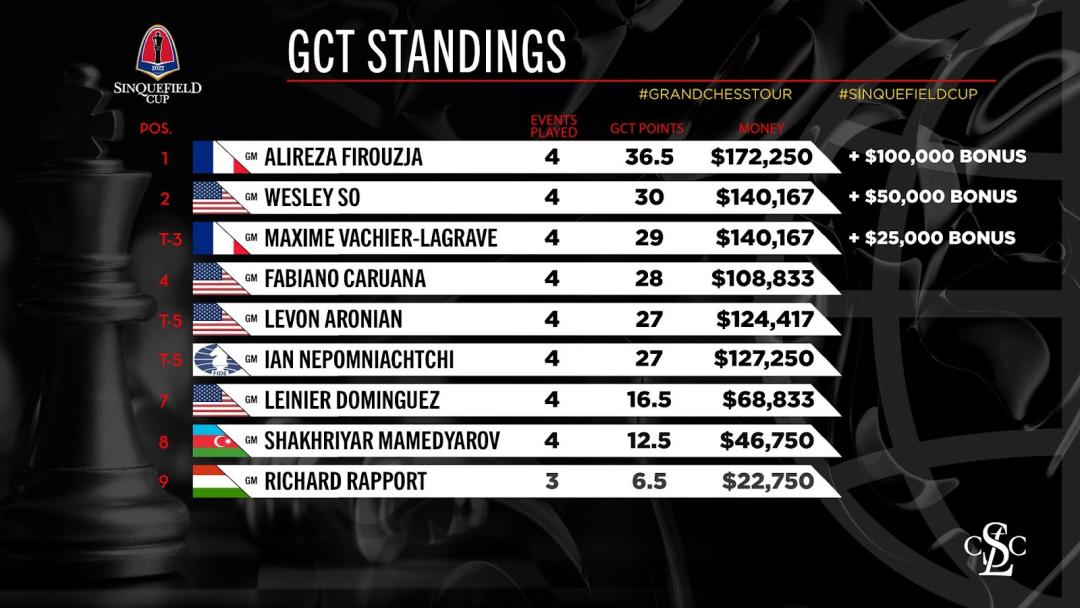 Starting at the end, the tiebreak match was a two-game playoff with a time control of G/15;d10. The first game featured a rather quiet opening which devolved into a roughly even ending and was drawn without great drama. The second game was a bit of a slaughter, with Firouzja as White getting a quite significant opening advantage and then Nepomniachtchi horribly blundering an entire piece early on. 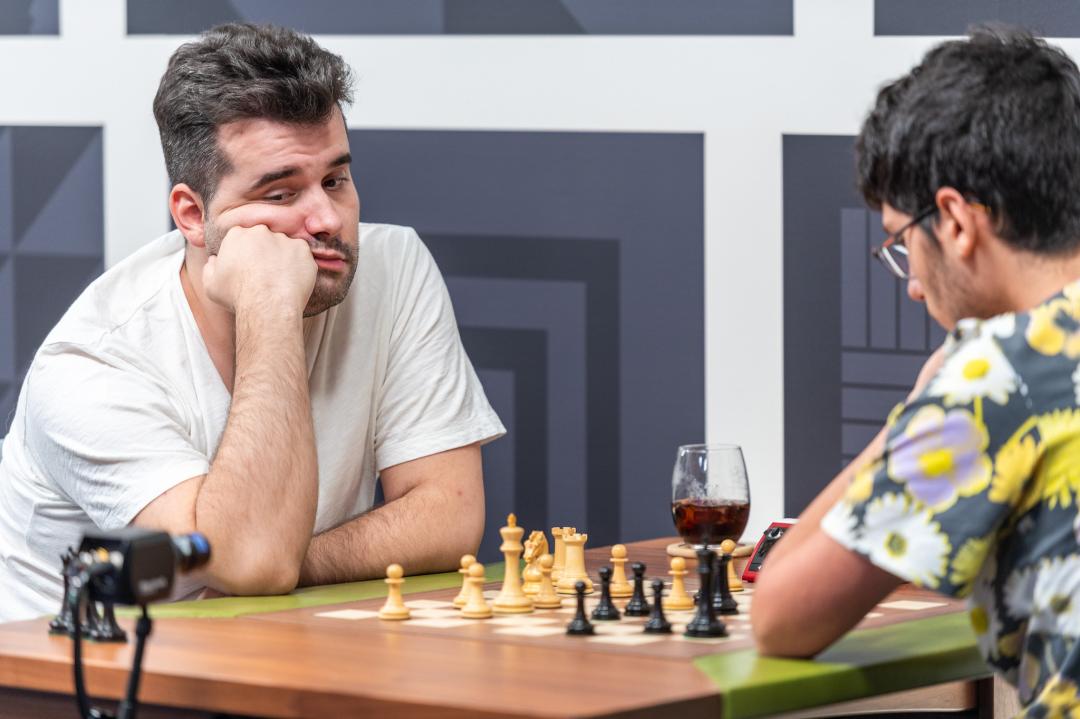 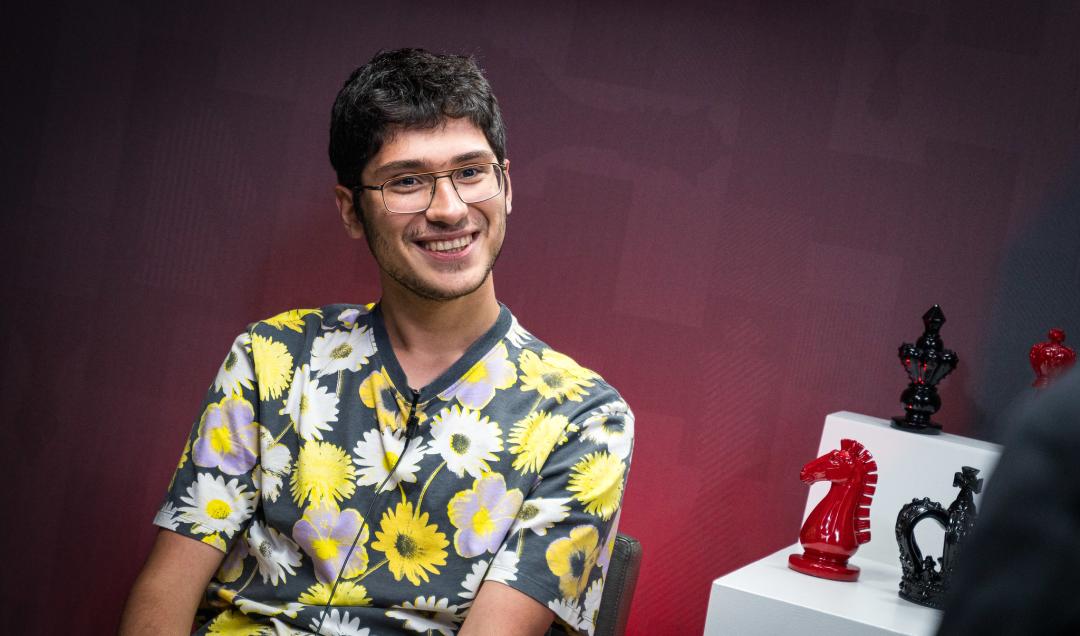 Here are some games from the second half of the tournament. I didn’t find any games worth showing from the seventh round, so it isn’t part of this recap.

The most significant game of the round was Firouzja – Mamedyarov, because it made it possible for Firouzja to get back into contention for a top prize. The opening featured a double-edged English Opening variation which has been contested fairly often recently. White made the first serious mistake and Mamedyarov pounced with a mini-combination that netted a pawn and stranded White’s king in the center. But he followed that up with very passive move (perhaps based upon a miscalculation) and then instead of developing his pieces tried to hold on to his extra pawn at the cost of disastrously exposing his king. A dramatic turnaround ensued. 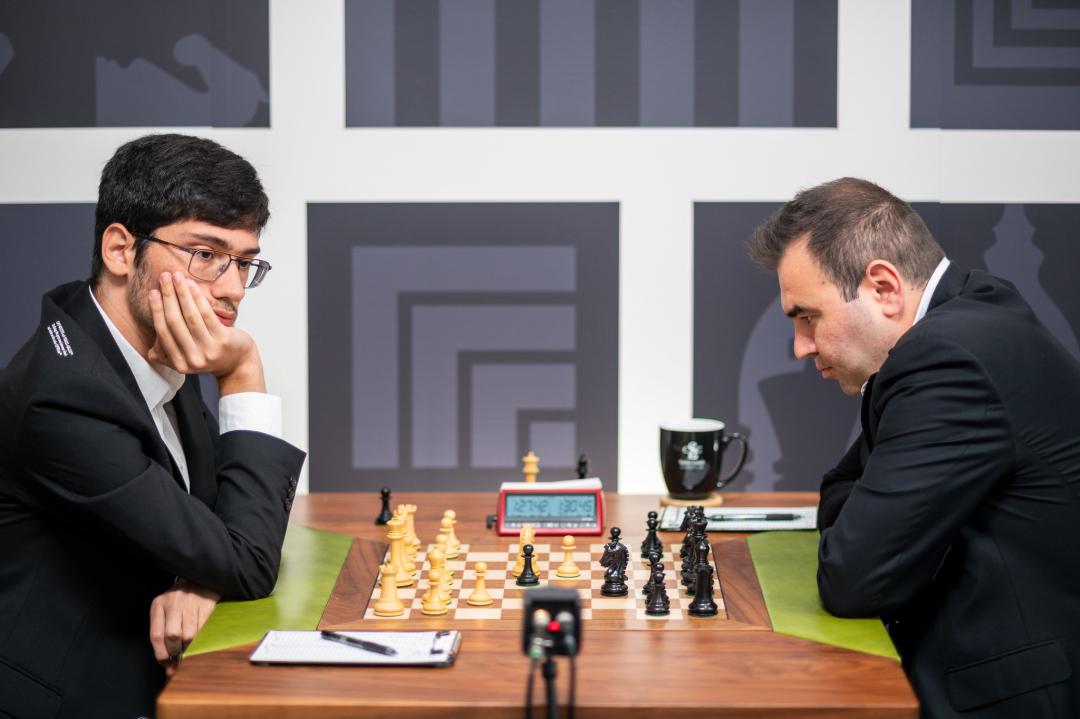 Image Caption
Firouzja - Mamedyarov during Round 6 of the 2022 Sinquefield Cup. Photo: Crystal Fuller/SLCC

Aronian – Vachier-Lagrave saw a new move by Aronian in an extremely well-known position of the Najdorf Sicilian. MVL responded well but then missed an equalizing opportunity and fell into a slightly inferior ending. Just when Black had equalized, he missed the best defense and fell into a lost position. This game, and the fact that Vachier-Lagrave missed a very promising continuation versus Niemann in the next round, turned out to be the main reason that Firouzja was ultimately able to overcome MVL in the Grand Chess Tour standings. 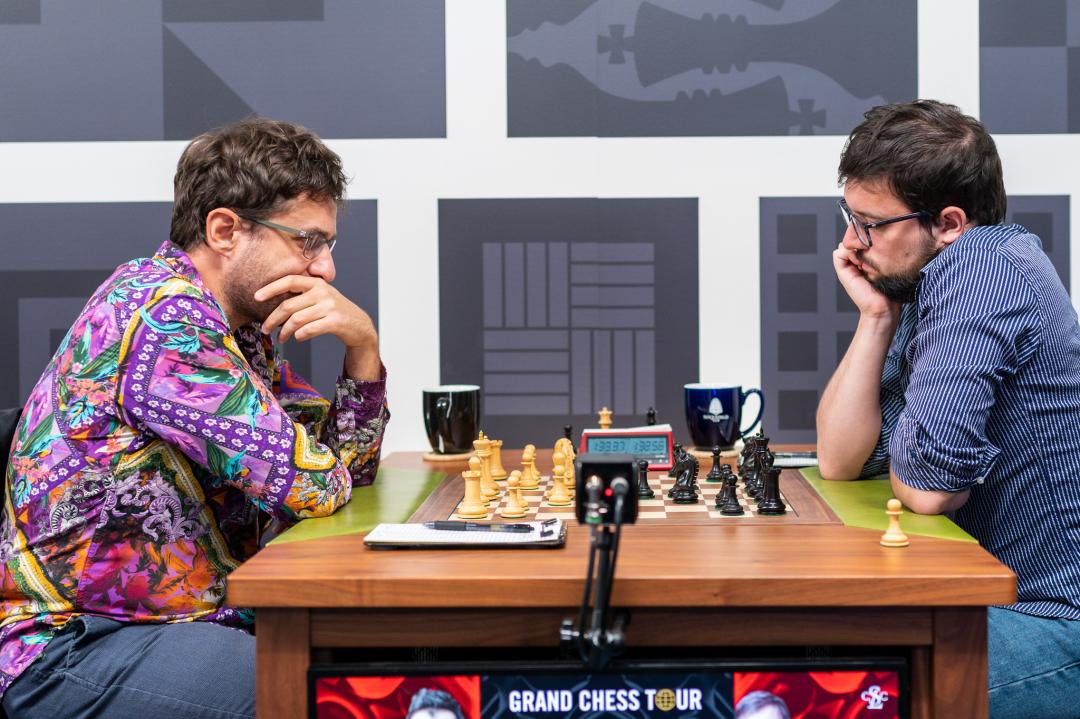 Image Caption
Levon Aronian (left) squares off against Maxime Vachier-Lagrave during Round 6 of the 2022 Sinquefield Cup. Photo: Crystal Fuller/SLCC

This round turned out to be the decisive one for the tournament. It featured ambitious play leading to tremendous excitement and tragic turnarounds. Caruana defeated Niemann in a very tough battle, which left the latter out of the first-place picture. Firouzja – So changed the fate of both players.

The opening looked innocent enough, but So found a way to create suddenly unstoppable threats on the kingside. Firouzja played a tough defense, but at the critical moment Black missed a crushing solution and opted for the mere win of a pawn. Apparently disoriented, So continued to make mistakes and Firouzja suddenly launched his own ingenious counterattack, which turned the game around in short order and brought Firouzja into the tournament lead. 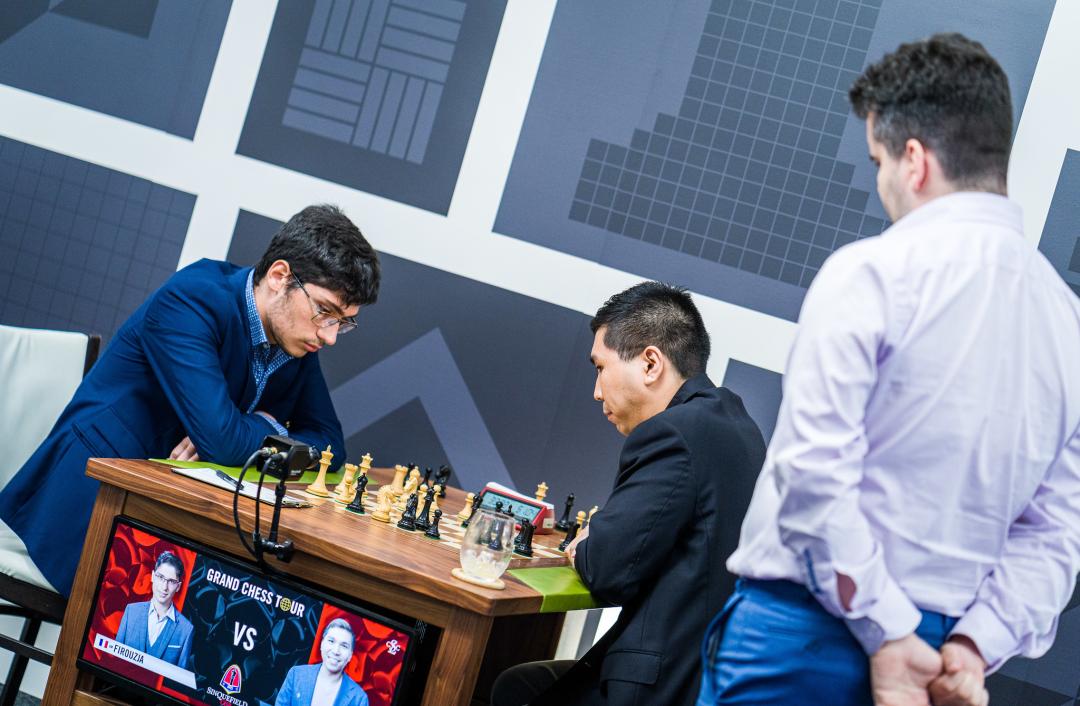 Image Caption
Nepomniachtchi watches Firouzja (left) and Wesley So do battle during round 8 of the 2022 Sinquefield Cup. Photo: Ootes/SLCC

Aronian – Nepomniachtchi was an exciting back-and-forth game that was also vital for the final result of the tournament. After a passive opening Aronian fell into a lost position, but miraculously recovered when Nepomniachtchi misplaced his pieces and underestimated White’s kingside play. Just when White seemed fine, he allowed Black to consolidate and gain a kingside attack at the same time. After that Nepo made no more mistakes and joined Firouzja at the top of the crosstable. 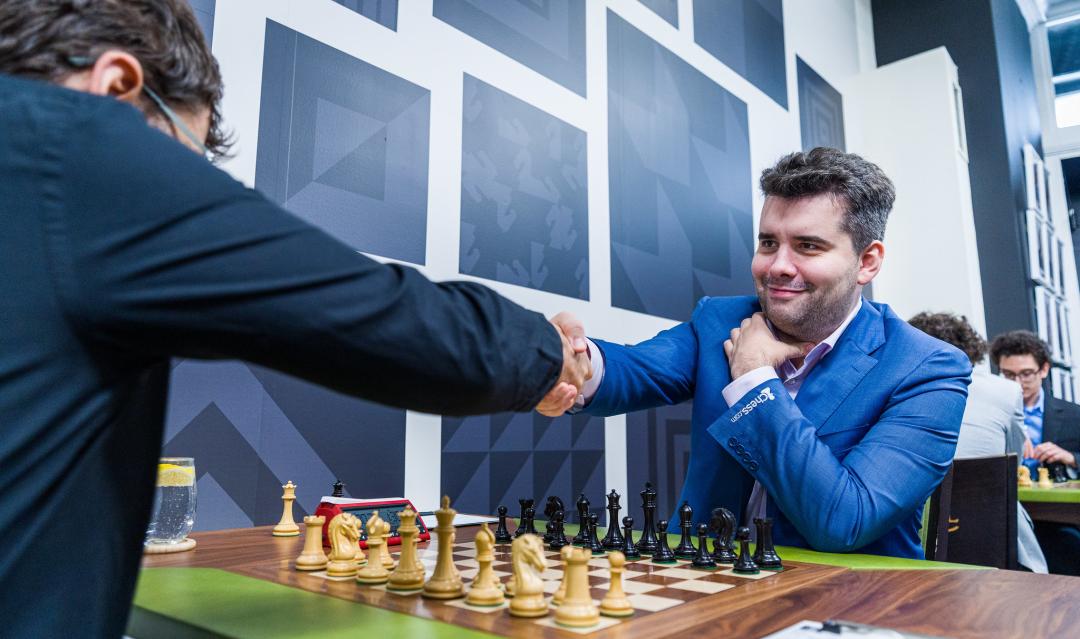 Image Caption
Nepomniachtchi welcomes Aronian to the board for round 8 of the 2022 Sinquefield Cup. Photo: Ootes/SLCC

In round nine, most players were content to draw, and in, fact three of the games had well-known openings which offer minimal prospects. In Nepomniachtchi – Niemann, White didn’t get much from the opening, but it was unbalanced enough to present opportunities, and Nepo managed to gain a solid advantage that eventually turned into a winning one. Probably due to time pressure, however, he drifted and did nothing for a few moves, allowing Niemann back into the game: 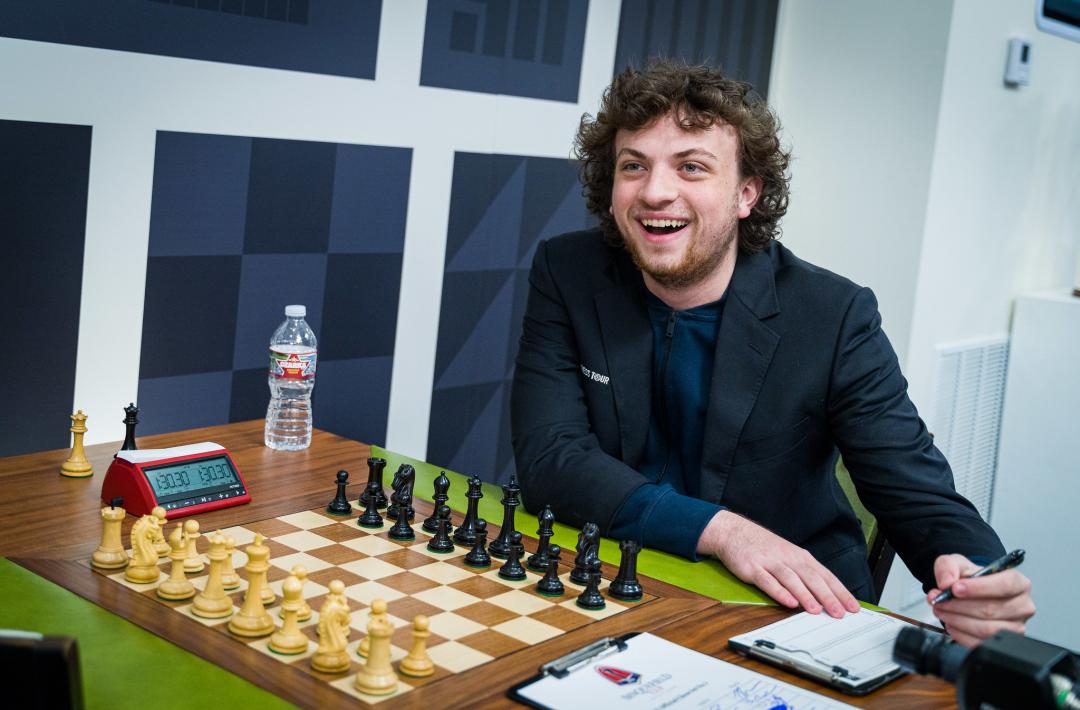 Image Caption
Hans Niemann gives a smile before round 9 of the 2022 Sinquefield Cup. Photo: Ootes/SLCC

This failure to convert left Firouzja and Nepomniachtchi tied for first place, with Firouzja winning the Grand Chess Tour in the two-game playoff.

Up next in Saint Louis is the traditional Ultimate Moves competition, where teams made up of leading stars and Saint Louis favorites (including Rex Sinquefield!) do battle in friendly blitz. This takes place Tuesday at 1 p.m. Central.

Beginning Wednesday it’s Chess 9LX (or 960 for those of you who have forgotten your Roman numerals!) with many of the Sinquefield Cup participants along with Hikaru Nakamura, Peter Svidler, and former world champion Garry Kasparov. Competition begins at 2 p.m. Central Wednesday through Friday.

You can watch both the Ultimate Moves competition and Chess 9LX at the Saint Louis Chess Club YouTube and Twitch channels.

Oh man!!...Fabulous  real deal serious  pro analysis delivered steaming hot... this is what is happening FRIENDS NEIGHBORS AND COUNTRYMEN... wrap up by feisty  savvy sage Watson....My  goodness gracious how things have changed. I HAVE WAITED 68 YEARS TO SEE FABULOUS  NO NONSENSE ALLOWED  SERIOUS PRO PROUD NEW US CHESS  COVERAGE...  RIGHT NOW RATHER THAN   NOW LONG GONE SILLY STUPID JOKES  LIKE MILLION DOLLAR LAWSUITS AGAINST WORLD CLASS CHESS  ORGANIZERS AND  AMERICAN HALL OF FAME  PLAYERS,  Money for serious chess reporting right here at US Chess.Get Yermolinsky and Aagaard in there also.                         Thank you so much. Rage on.                     Jude Acers/ New Orleans