Familiar Faces Lead the Standings After Day 2 at U.S. Open

While things are still quiet at the top of the standings after two rounds of the traditional schedule of the 122nd Annual U.S. Open Chess Championship, the races for first in the five invitationals are all heating up after the first of two grueling days of back-to-back classical games.

Speaking of, it only took two grueling days of classical games for the Weekend Swiss to produce a winner. Andrew Diep (MD) scored a perfect 5/5 to take top honors on Sunday, earning $200 for his troubles. There was a four-way tie for second through fifth places, with Joshua Alan Harrison, Josh Luger, Gordon Zhenyu Xu, and Aiden Khademzade all at four points. Full results are available at the main US Open results page.

In the Open, 17 players still have a perfect score, including GM Elshan Moradiabadi and all four national masters playing this schedule. The rest of the field are mostly Expert and Class A players, meaning the games at the top should get much tighter today. The only exceptions being Sebastian Suarez and Sara Walsh, a duo of approximately 1750 players who both pulled upsets over their 2000-rated opponents.

GM Enrico Sevillano, the southern California representative, is the lone perfect score remaining in the Irwin Tournament of Senior Champions, trailed by seven players a half-point back. Of the various draws yesterday, the most interesting was Illinois’s Steven Szpisjak refusing to let South Carolinian IM Alexander Matros crash through in a drawn-out positional battle. 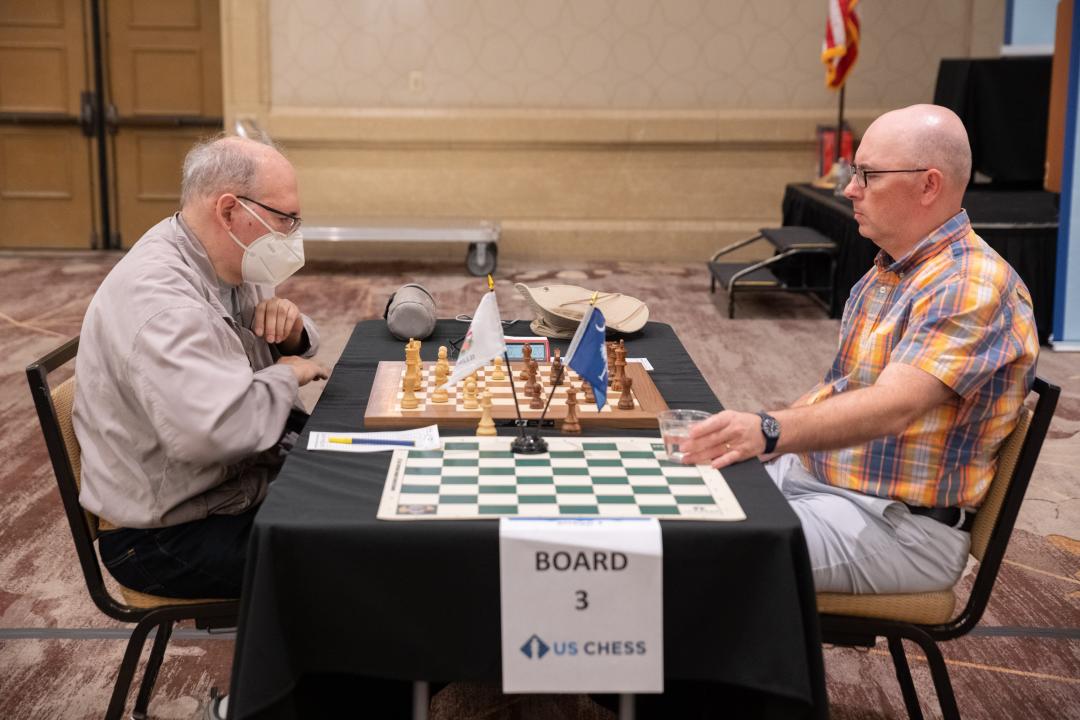 Three players are still perfect in the Denker Tournament of High School Champions, including the field’s lone GM, Andrew Hong of Northern California. He is joined by Linden Lee of Minnesota, who pulled an upset over Ohio FM Jason Wang, and Oklahoman FM Ryan Amburgy. Amburgy’s upset win over New Jersey IM Eddy Tian was rather remarkable, as Amburgy navigated to a non-theoretical position early, grabbed a space advantage in the center, and never allowed his IM opponent a whiff of counterplay. 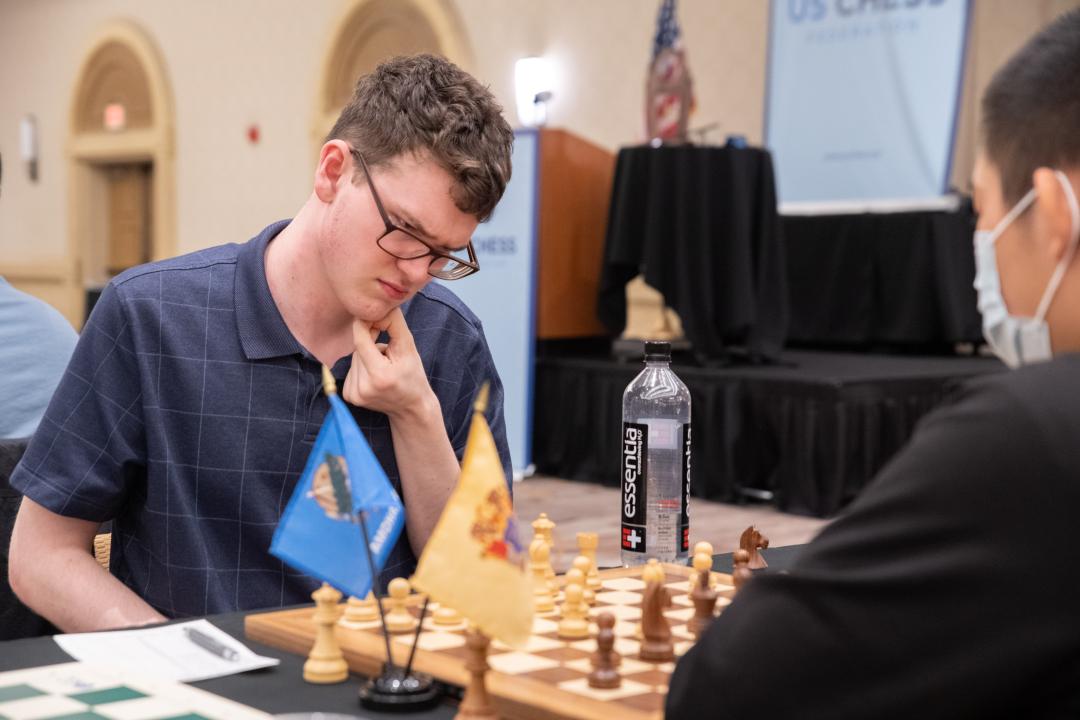 In the Haring Tournament of Girls Champions, all four names atop the standings should be familiar to anyone who followed the U.S. Girls Junior Championships last month. We are set for rematches between FM Alice Lee (MN) and IM Ellen Wang (NY), as well as FM Ruiyang Yan (CA-N) and WFM Gracy Prasanna (PA). Wang drew Lee with the black pieces back in St. Louis, and will have white today. Prasanna drew Yang at the Girls Junior with the white pieces, and will have black in this rematch.

A quartet also leads the Barber Tournament of Middle School Champions. The two FMs, Bach Ngo from Florida and Pennsylvania’s Erick Zhao, are on a collision course to meet in round five tonight. That is, unless Kansas’s Vaseegaran Nandhakumar and northern California’s Jacob Chiang have anything to say about that this afternoon.

Finally, three perfect scores lead the Rockefeller Tournament of Elementary School Champions. With an upset over 1994-rated Kentuckian John Abraham, the North Carolina representative Krishna K. Rallabandi, rated 1716, joined Eshaan Hebbar of New Jersey and top seed Andrew Jiang of Georgia. Jiang’s play has been staggeringly mature so far, as exemplified by this fine positional victory in the English Attack of the Najdorf. 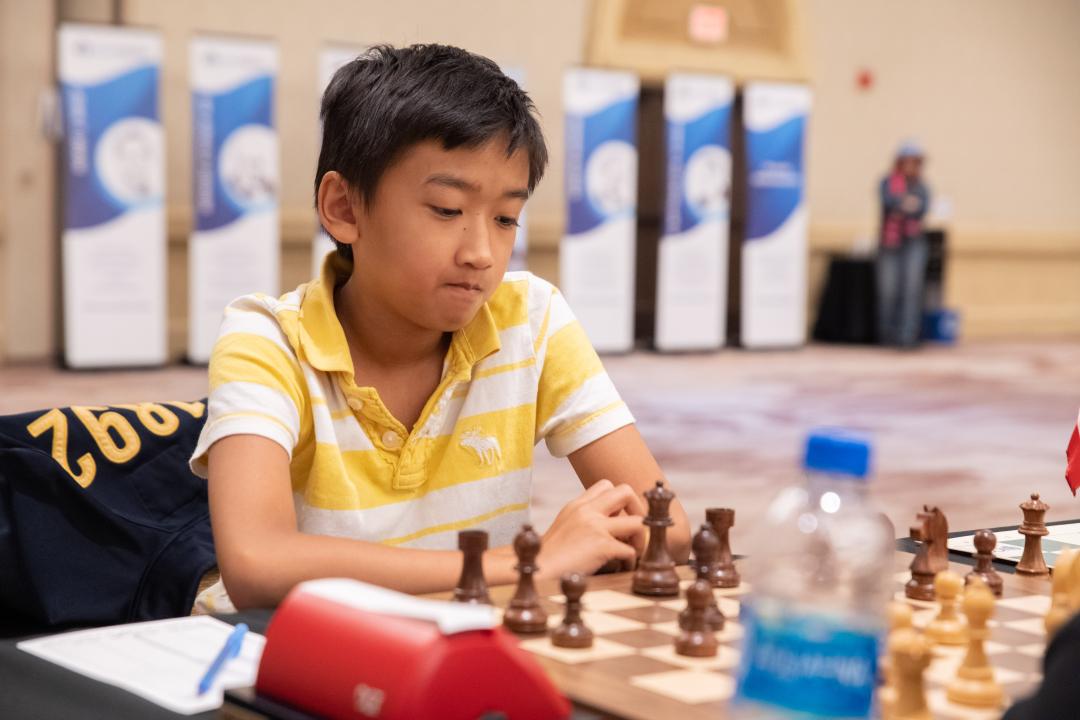