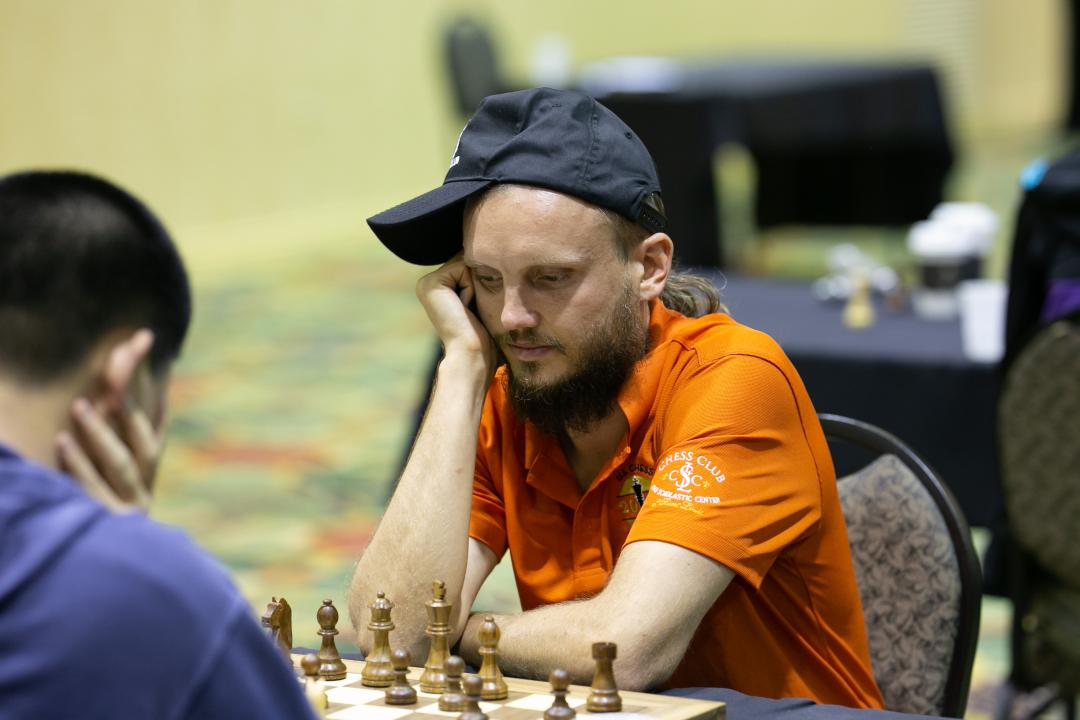 Timur Gareyev faced Awonder Liang in the final round of the U.S. Open, Photos Henk Prinsloo 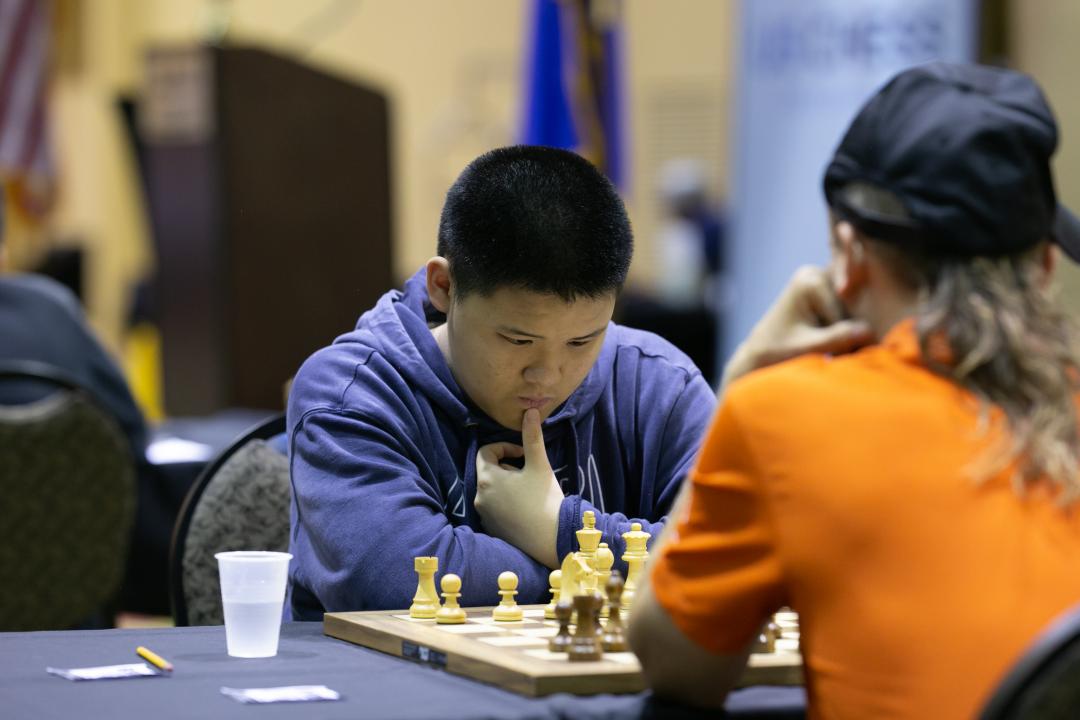 Blindfold phenom Timur Gareyev (Kansas) kept his eyes very wide open to opportunities as he rebounded from a 5th-Round loss to GM Jorge Cori (Missouri). Gareyev scored eight wins to clinch clear first, a half-point ahead of five other GMs at the 2018 U.S. Open Championship. He took home an impressive trophy, a $6,600 check, and a coveted spot in the 2019 US Invitational Championship. “It’s my most significant result in the past three years,” Gareyev said. 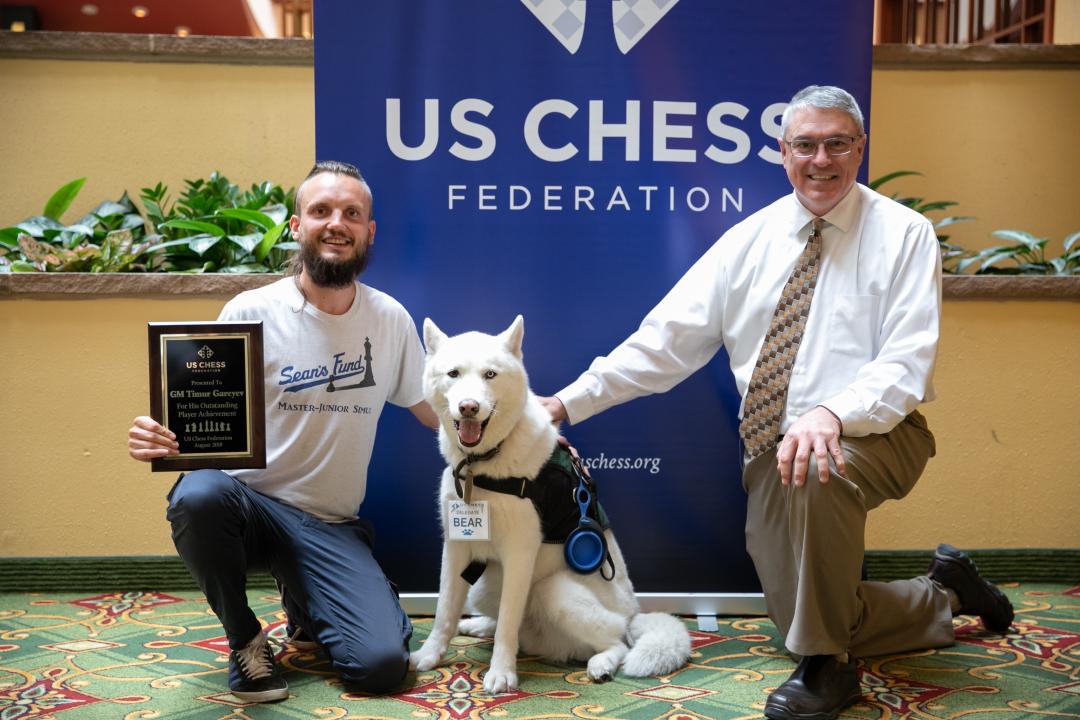 Timur Gareyev receives an award at the US Chess Annual Awards banquet for his blindfold feats. With Bear and US Chess President Mike Hoffpauir
Many know Gareyev these days for his remarkable blindfold-chess performances. He holds the official Guinness World Record for his 48-board display in Las Vegas in December 2016. But he’s no stranger to big tournament wins. In 2011, while completing his B.A. in marketing at the University of Texas-Brownsville (now UT-Rio Grande Valley), he tied for first at the 2011 U.S. Open with six others. (This year he scored a half-point better to take sole honors.) He’s also won the Chicago Open, the National Open, and the North American Open. The US Chess Trust awarded Gareyev a Samford Scholarship in 2012. Before coming to the US, he tied for first in the National Championship of Uzbekistan in 2007 and twice played on its Olympiad team. Five GMs followed Gareyev a half-point behind at 7 ½ : GM Ruifeng Li (Texas), Illia Nyzhnyk (Missouri), Andrew Tang (Minnesota), and Alexander Fishbein and Mackenzie Molner (both of New Jersey). 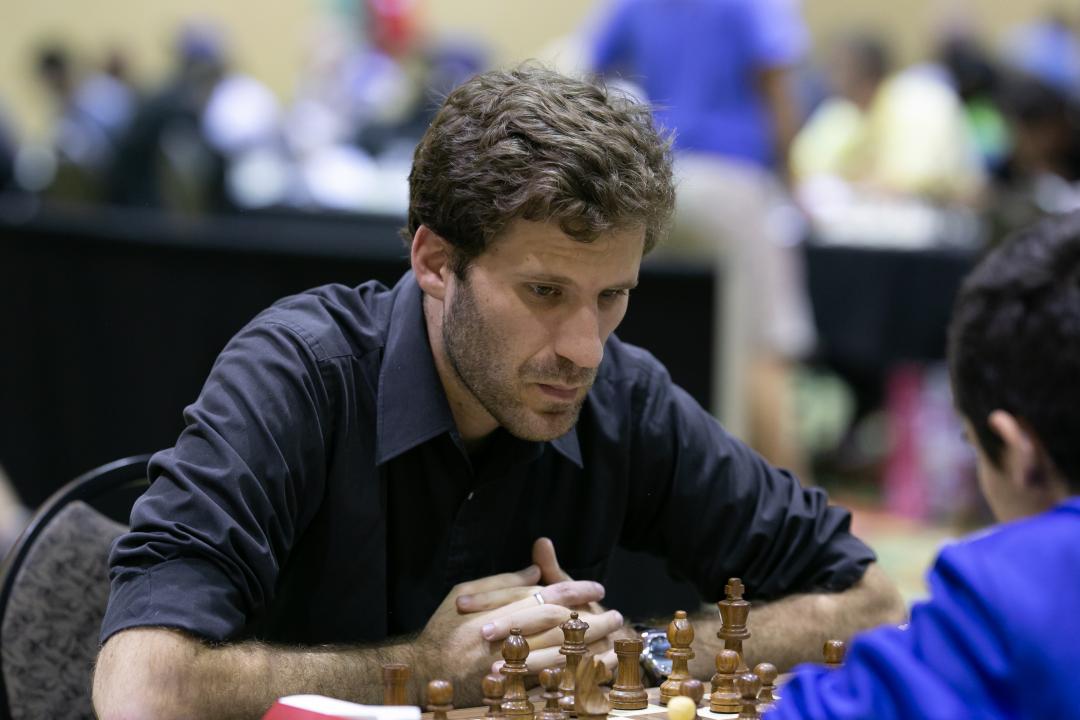 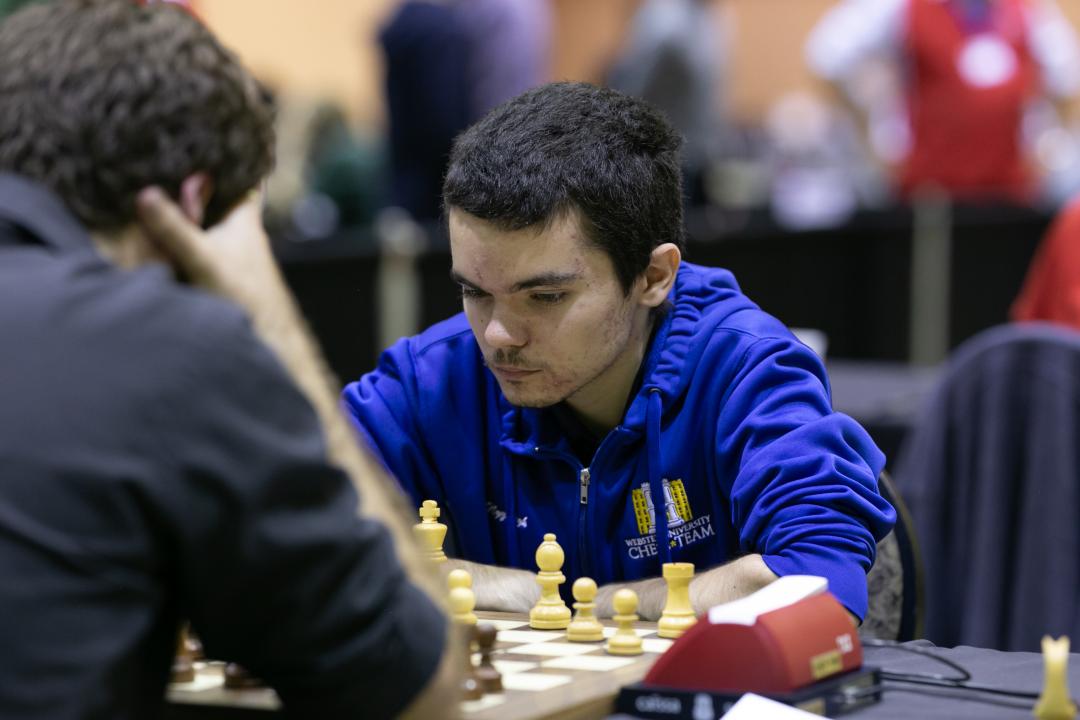 Illia Nyzhnyk
Nyzhnyk was first to establish that score group with a curious knockout over GM Robert Hungaski (NY) that featured g4 and a two-piece mating attack. You can safely play this over at home—but be cautious about showing it to beginners! After Fishbein’s 18-move draw with Li on Board 1, the final round game to watch as Sunday afternoon became evening was GM Awonder Liang v. Gareyev. Would one of them pull off a win to take sole first? The top U.S. player in the U.S. Open is seeded into next year’s US Invitational Championship, with its even greater prestige and prize fund. Liang was already guaranteed a spot based on his winning the recent U.S. Junior Championship, his second in a row. But neither player had collected a clear-first US Open title, and Gareyev was hungry to return to the Invitational, where he had tied for third in 2013. Going into the money-round, Liang, one of this year’s US Chess Trust Samford Fellows, was undefeated, winning five games, including a victory over GM Alex Shimanov (Missouri), and drawing GM Alexander Ipatov (Missouri) in Round 5 and Li in Round 7. The sudden death of one of the participants required the complete evacuation of the tournament hall for a 3 ½ -hour delay of all games in the ninth and final round. Read the US Chess statement posted that night here. Everyone showed respect for this necessity, as one of our own had ended life at the board. Liang-Gareyev was on Move 15 at the time all clocks stopped. Gareyev said that after the delay, he had to “Push deeper and harder. My position was strategically dangerous. Liang played excellent chess throughout the tournament.” GM Belous (Texas) v. Molner was another of the round’s longest struggles, boiling down to a complex ending with each side having queen, rook and four pawns. The game was equal right up until Belous’ 53rd, when his midnight slip overlooked the strength of Molner’s definitive 53. … Ra3. 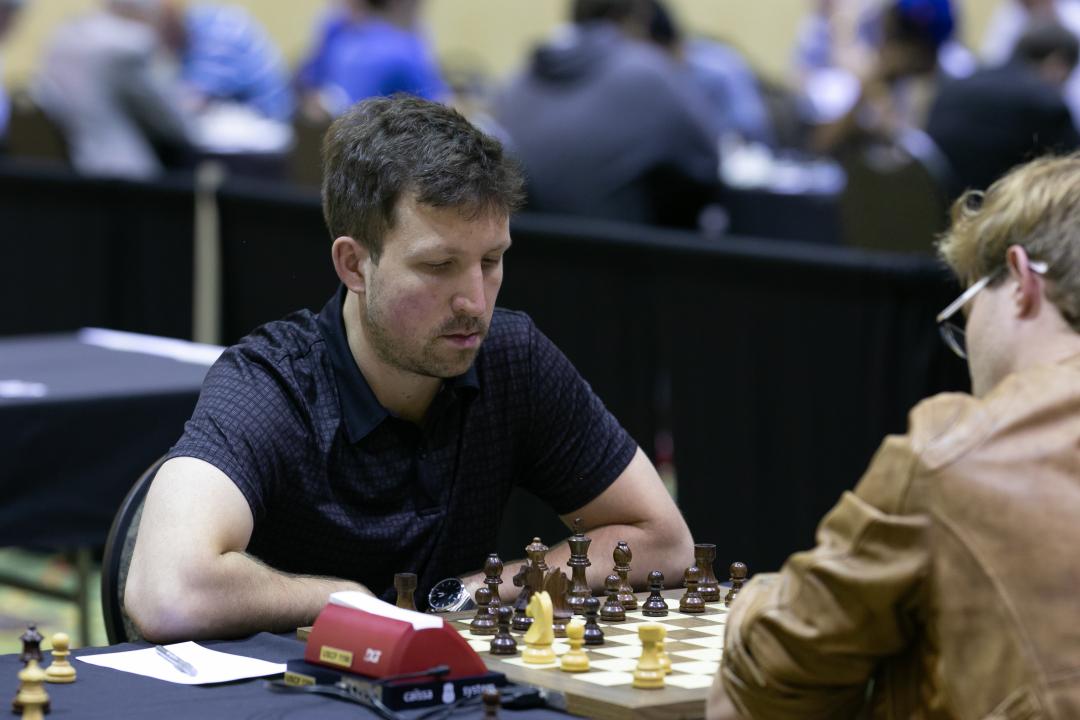 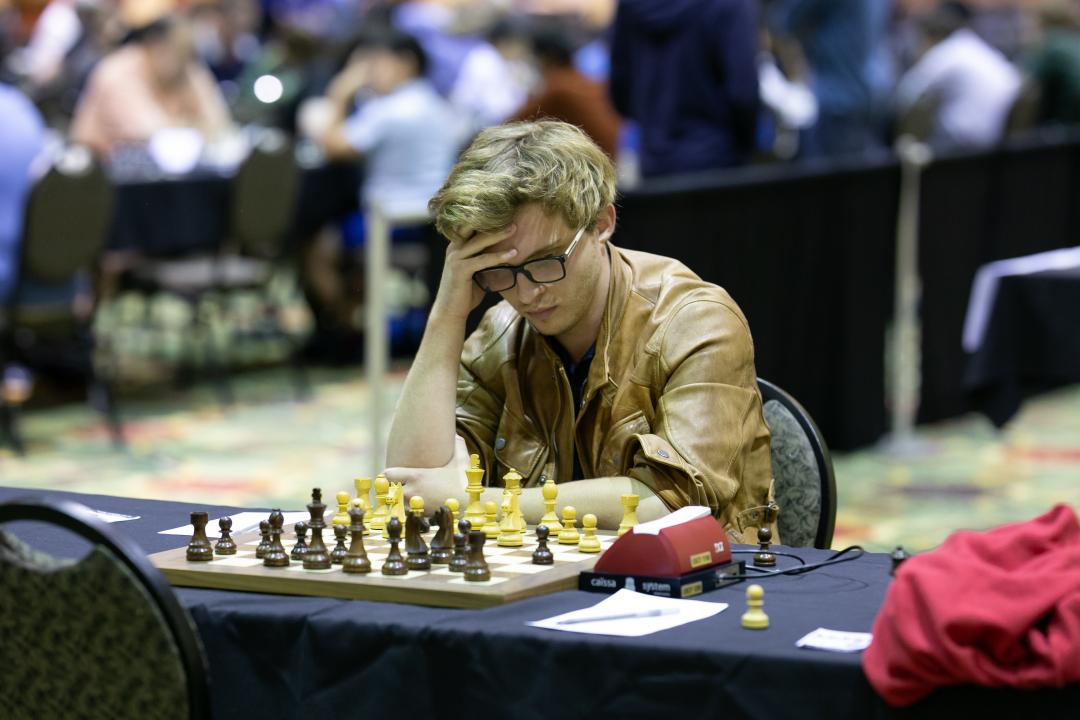 GM Belous at the U.S. Open
Despite the late hour after the suspension of play, Molner was wide-awake to the rook maneuver and follow-up tactic that lifted him into the 7 ½ score group. In the hallway among a throng of sleepy but dedicated fans, I gave the always modest “Mack” a thumbs-up and said, “Great game!” His expression demurred my overdone compliment. I corrected myself: “Great result!” Mac smiled and accepted that version. FIDE awarded 18-year-old Andrew Tang his GM title earlier this year. Tang went into the last round of the US Open undefeated but with three draws, one of them against GM James “Comeback” Tarjan (Oregon), who played on five straight Olympiad teams in the 1970s and a number of US Invitational Championships. Tarjan gave up chess to be a professional librarian in 1984. After retiring, he returned to chess at the 2014 U.S. Open at a consistently remarkable strength, despite his long absence from the game, finishing just a half-point out of first. This year he finished in a tie for 7th-13th, with 7 points. His only loss was to Ipatov in Round 6. But Tang quickly declared all-out, on-board war against Ipatov in their final round contest, handing the 2012 World Junior Champ and former Turkish champion his only loss. 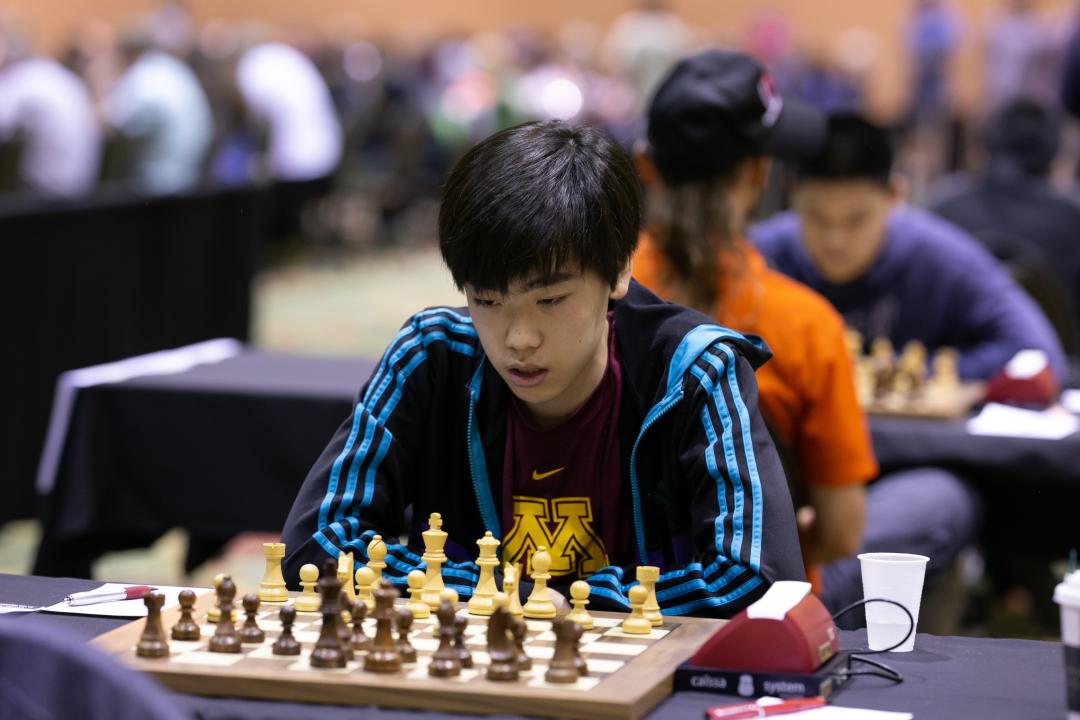 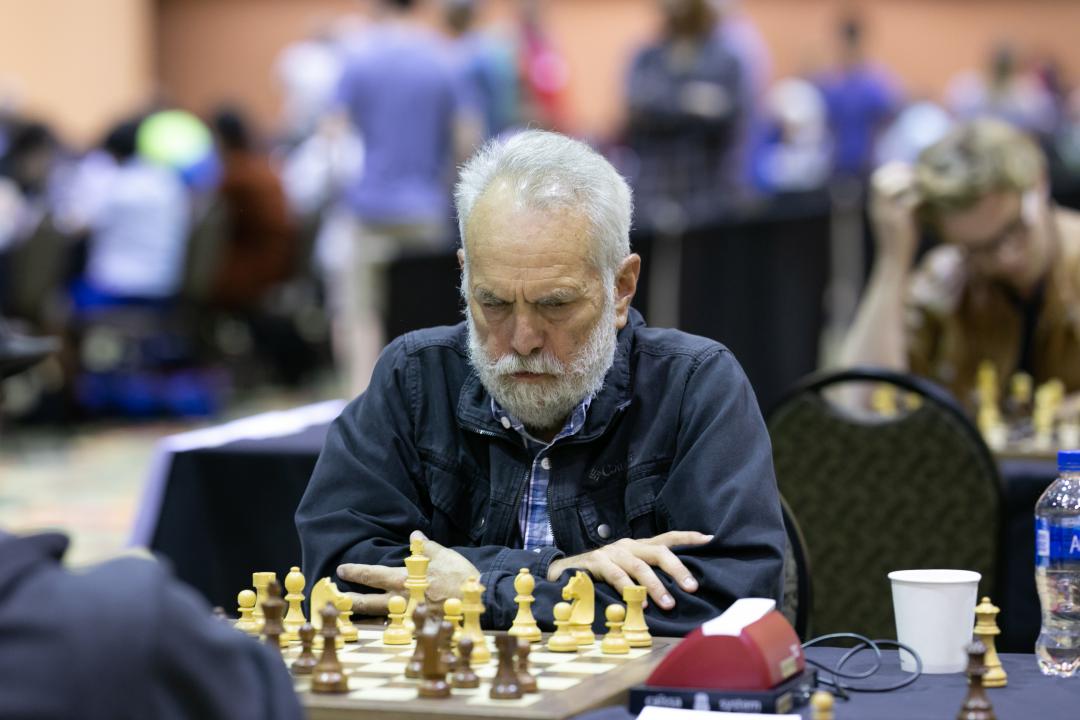 James Tarjan
Lots of other winners The 119th US Open awarded 76 cash awards in the main event, totaling nearly $42,000. Four tied for top master with 6 ½ points: Josh Bloomer (Colorado), Andrew Titus (Minnesota), , Mark Robledo (Illinois), Isaac Martinez (Arizona) and Joshua Grabinsky (Oregon). Five tied for top Expert with 6 ½ : Jack Curcio (Illinois), Josiah Stein (Wisconsin), Vikram Srivastava (Ohio), John Miller (Ohio) and Tony Davis (Arizona). John Ritz (Wisconsin), Jason Luchan (New York), Jake Wang (Connecticut), Saif Shawkat (Kentucky), Nathan Chen (Iowa) and Allen Stern (Pennsylvania) each scored 6 to tie for top-A. A dozen players shared the B-prize with 5 points . David Roshu (Oregon) topped Class C with 4 ½. Notable among the class winners was Ryan Wandsnider (Wisconsin), who won Class E and Below with 4 ½ and GM Arnold Denker’s grandson Dylan Denker (Florida), who was best Unrated. Complete results are available online here.   Lots of side events GM Belous, GM Andrey Stukopin (Texas), and Jimenez Corrales (Missouri) tied for first place among 96 players in the 2018 US Open Blitz Championship. Bob Holliman (Missouri) won the annual Weekend Swiss, topping a field of 50. Daniel Brashaw and Gokul Thangavel, both of Iowa, won the Bughouse championship. Daily quads were run each weekend, with more than 100 participating. At the start of each round, NM Hal Terrie (New Hampshire) honors those with long attendance at the US Open. This year, James Mennella (California) marked his 40th US Open. His 40 uninterrupted years in a row is a record. Meetings and workshops US Chess hosts dozens of informative workshops during the U.S. Open Championship—on scholastic chess, women’s chess, college chess, FIDE matters, rules, ratings, publications, Chess Journalists of America, and many other topics. During the final weekend, before game times, delegates from all over the US met to discuss and vote on legislative matters. This year the delegates unanimously voted a special new designation, Dean of Scholastic Chess, to Dewain Barber, for his lifelong and generous support of youngsters in chess. 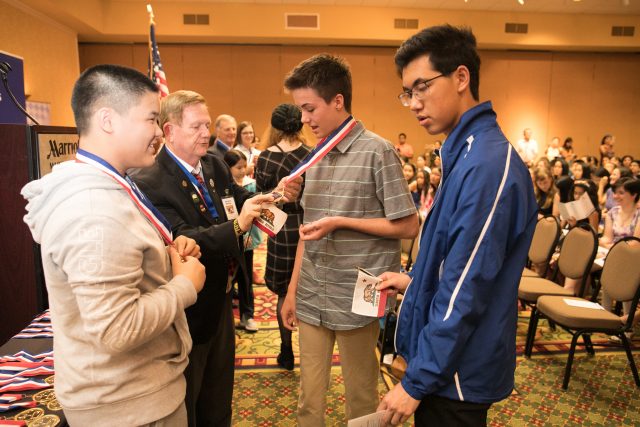 Dewain Barber and GM Awonder Liang at the Opening Ceremony of the Denker, Barber, NGTOC and NSTOC. Photo Henk Prinsloo
On the final Sunday, two Executive Board members, WGM Angelina Belakovskaia (Arizona) and  Lakshmana “Vish” Viswanath (Texas), concluded their terms of service to US Chess, while Randy Bauer (Iowa) and Ryan Velez (Kentucky) began three-year terms of service. The Board elected Allen Priest (Kentucky) new president of US Chess. Executive Director Carol Meyer attended all of the events, discussing plans for the future with delegates and other members. 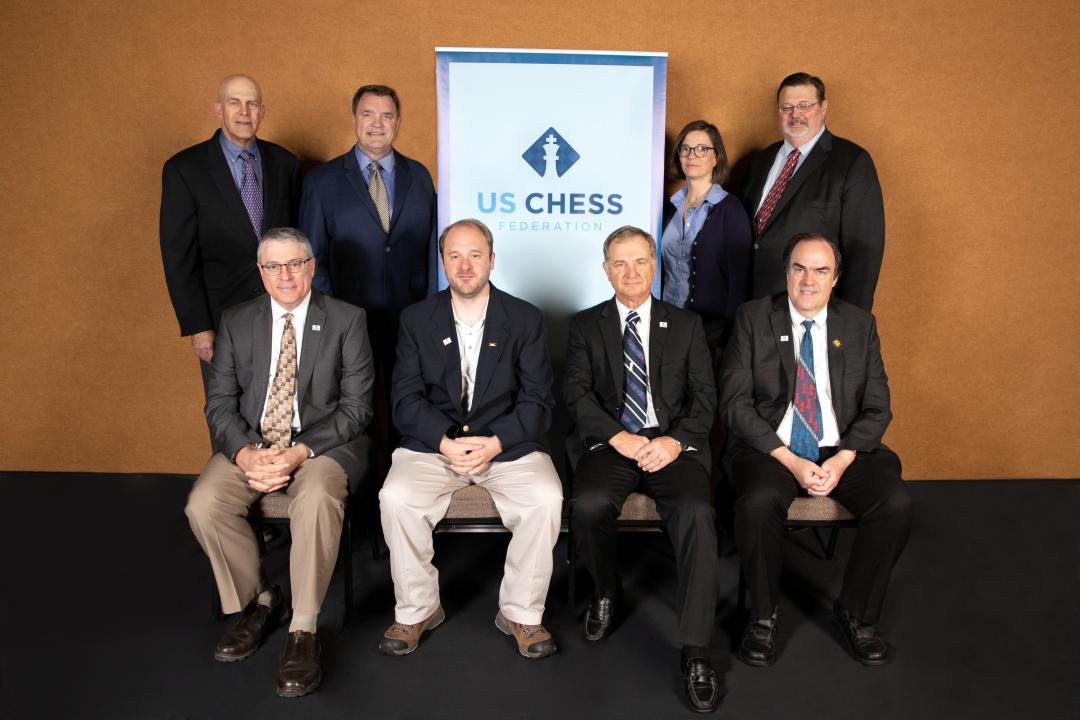 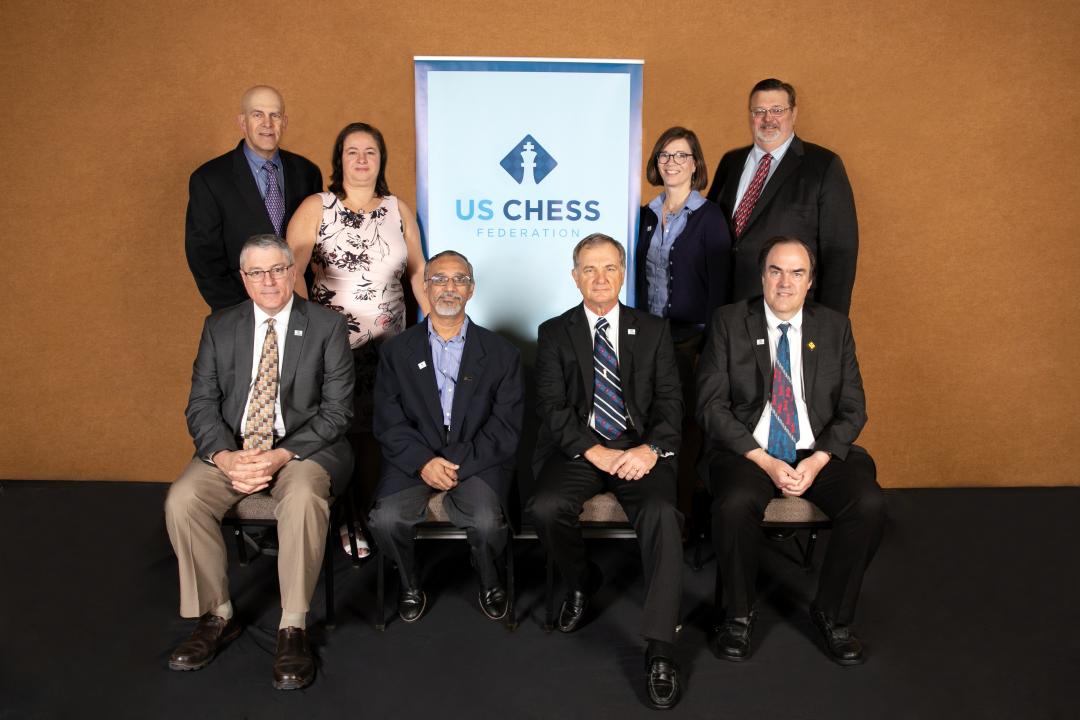 US Chess Board photos by Henk Prinsloo
Organizing the U.S. Open takes a hardworking, professional team. The 119th iteration of our most historic national chess championship was, as usual, held under the auspices of US Chess. Its National Events Manager Boyd Reed and Assistant National Events Manager Pete Karagianis were meticulous in making the main event and many side tournaments, meetings and workshops inviting. Chief TD Wayne Clark (Illinois) managed a staff of 14, including Floor Chief Bill Snead (New York), and Back Room Chief Joe Yun (Ohio). Frank Johnson (Georgia) and Kelly Bloomfield (Ohio) monitored the internet broadcast of the top boards. Jon Haskel directed the four invitationals that kicked off the schedule. Executive Board Secretary Mike Nietman was everywhere pitching in, making the second US Open in five years in his home state a success. 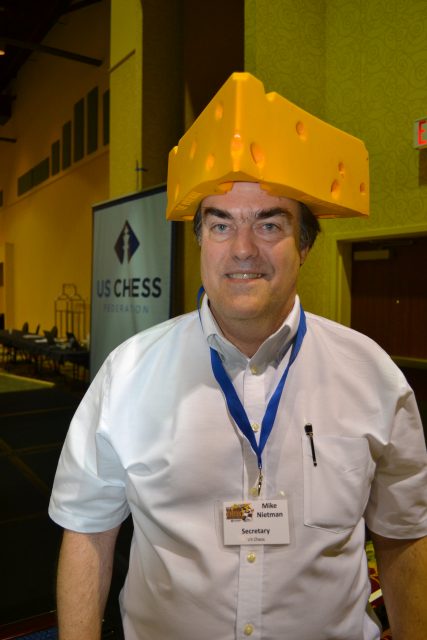 The 120th US Open Chess Championship will be contested at the Rosen Centre Hotel in Orlando, Florida, August 3-11 and offer the now usual choices of nine, six and four-day schedules. Make plans to be part of this historic anniversary. At the US Open, you’re always in the same room with some of the world’s best, you’re always a part of chess history, and you always have a shot at a substantial prize. 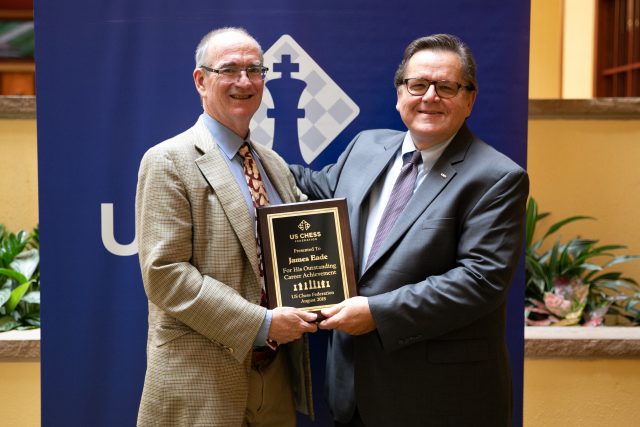 Jim Eade and author Al Lawrence, both of US Chess Trust at the US Chess Annual Awards banquet, where Eade won an award for Outstanding Career Achievement, Photo Henk Prinsloo
Find full standings and results of the U.S. Open here and find prize breakdown here.
SHARE: