Epic Round Six Draw as Caruana Presses Carlsen in Petroff 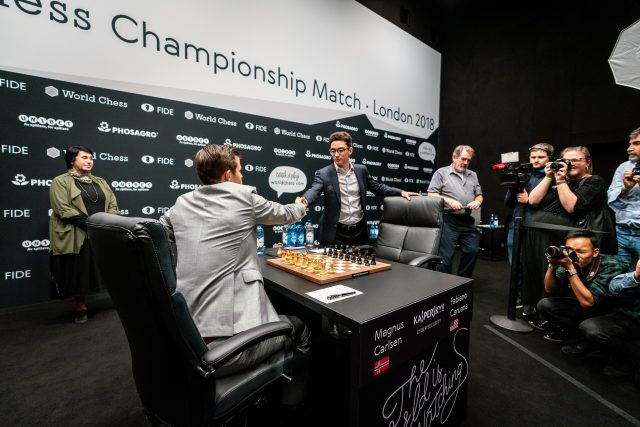 Round six at the World Chess Championships, Photo Eric Rosen

After a nearly flawless game five, Carlsen and Caruana continued to thrill fans and spectators with an epic game six draw. The game started out somewhat tepidly, as Carlsen played 1.e4 for the first time in the match, but got nothing against Caruana's well prepared Petroff. Fabiano Caruana began to outplay the World Champion at his own game- grinding an edge from a seemingly equal ending. IM Eric Rosen, tweeting for US Chess, pointed out early that the star of the show was Fabi's Petroff knight, which took an incredible tour.

For more on the actual "Knight's Tour" problem, see our article by Patrick JMT on this site. The pressure caused the World Champion to bail out into a highly reduced endgame. [fen] 5k2/5pp1/8/5PP1/2B4P/bPn5/P5K1/8 w - - 0 51[/fen] Commentators and even computer engines had a lot of trouble figuring out whether the game was drawn easily, drawn with precise play, or winning for Black. At one moment, Caruana had a deep, study like path to victory, which stunned fans and commentators. I was blown away by the beauty of the idea: placing the knight on g1 threatens the maneuver Ng1-h3-f4, forcing White to try placing his bishop on g4. [fen] 5k2/8/5pK1/5P1P/6Bb/8/8/6n1 b - - 0 71[/fen] The aesthetic winning construction. The bishop does not have enough squares on the h3-c8 diagonal and White will find himself in zugzwang. [fen]7k/7P/5pK1/5Pb1/6B1/8/8/6n1 w - - 0 74[/fen]

No one blamed Caruana for missing it though.

Garry Kasparov went even further, suggesting that playing the winning continuation was beyond the reach of the human brain.

Magnus himself was shocked by the news.

Interact with Eric Rosen on twitter @USChess using the hashtag #CarlsenCaruana. Find out Eric’s philosophy on tweeting and match predictions in our earlier interview.  Worldchess.com is the tournament website. The Today in Chess broadcast daily with a new start time of 10 AM ET  will feature a star-studded schedule of interviews. Full list of viewing options in our Couch Potato guide. Find our media kit and mainstream media round-up here.