As the All-Girls Nationals (April 22-24) and Elementary Nationals (May 6-8) loom, Pete Karagianis pinpoints eight lessons from the Junior High School Nationals, held April 16-17 in Indianapolis.  It was an exciting (and long) weekend at the 2016 Junior High (K-9) Nationals in Indianapolis, Indiana. By and large, the top seeds held serve, with the two 2300+ players in the K-9 championship section - Maggie Feng (6.5) and Ben Li (6.0) - remaining in the top two positions when all was said and done. In the K-8 Championship, Danial Asaria also matched his finish with his seed, finishing first in tiebreaks ahead of his final round opponent, Wesley Wang. Here are my eight takeaways from the championship weekend. Number 1: Tactics Matter! Yeah, like “Pin it to win it.” Remember all of those neat rhymes and sayings and memory tricks to help recall the way to maximize your threats? They, of course, will always find a way into the games at Nationals. Take, for example, the following position from the K-8 U1000 section between Nigel Cooper and Avighnav Vasudevan: As it happened, black missed his chance and fell for a fork later in the game, losing. Tactics count! Number 2: Hoodies are in Style 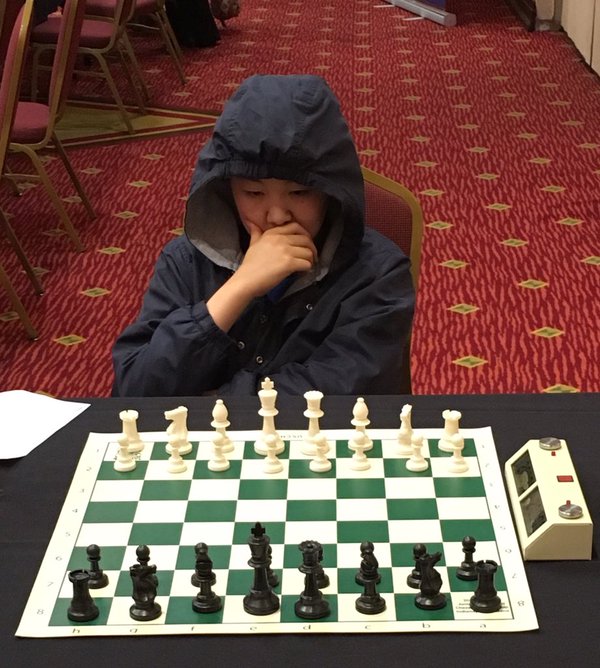 If you scoped the USChess Twitter feed (@USChess), you may have noticed the power of the hoodie sported by Ben Li in the K-9 Championship section. It guided him to an undefeated 4.5/5 score and sheltered him from the elements, glaring light, and, well, pretty much everything else. The hoodie was, in fact, a very popular bit of attire across all sections. Perhaps I can learn something from this fashion “do.” 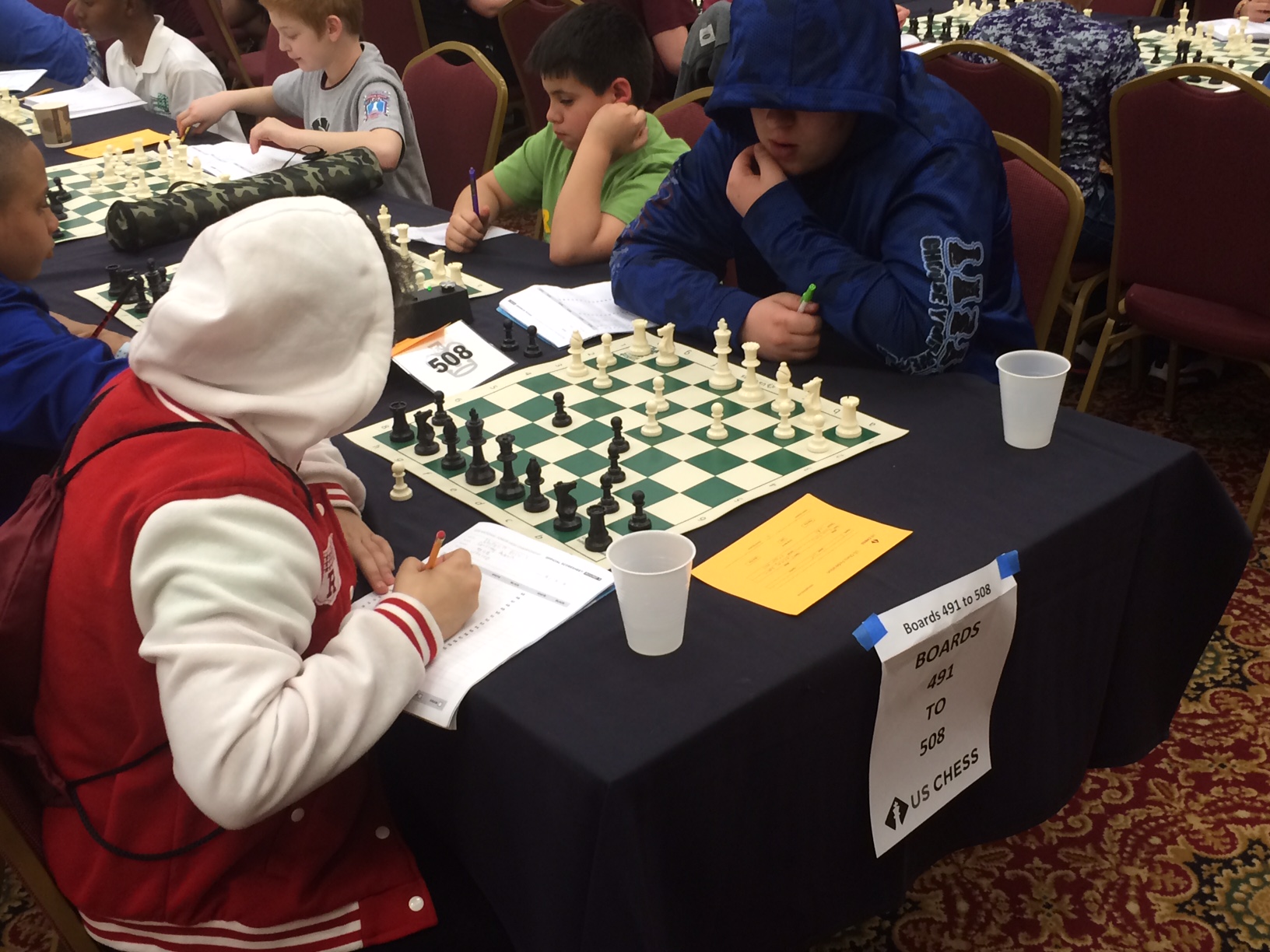 Jeffrey Xiong, who is currently causing a stir at the US Championship with his excellent result, would certainly approve. 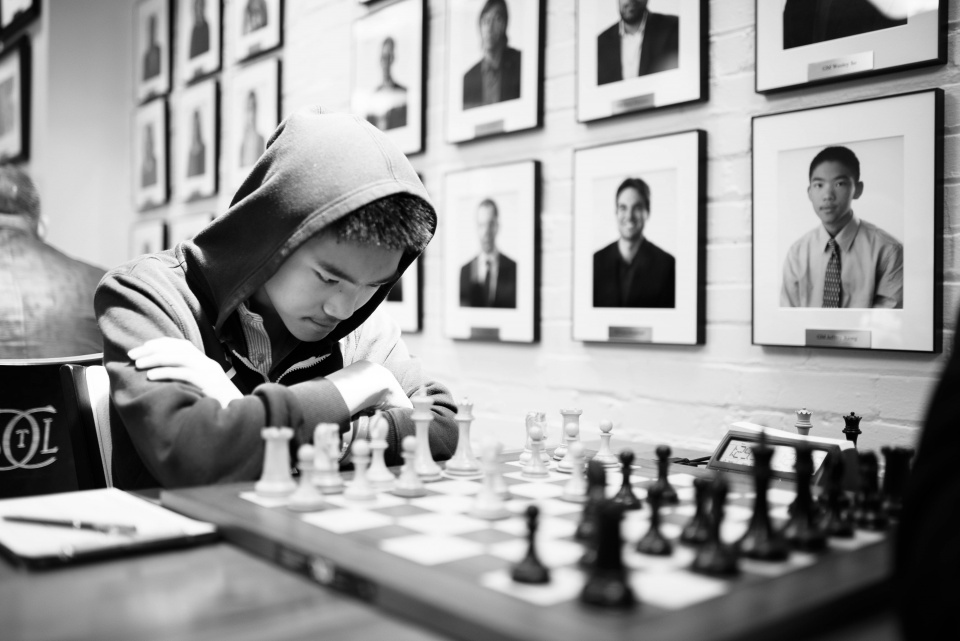 Number 3: It’s OK To Go Backwards Let’s give the parents some love. They get the rooms, book the flights, find food, and generally sit around nervously for (today, anyway) nearly twelve full hours. Well, some of them. Others play in the Friends and Family section! In the following somewhat strange early(?) middlegame between Vinoth Rajakumar and Gerald Roberts, what is white’s best move? Number 4: Sleep Matters Day two, Saturday, was the marathon day - the only day with three full rounds. In between the second round of the day (round 4 overall) and round 5, I rounded the corner from the “Under” sections headed to Chess Control to nearly stumble - quite literally - over a chess team that was completely asleep in unison - every member - equipped with eye masks and earplugs - while the chess parents watched carefully over their flock. It made me drowsy and, in fact, was a solid reminder of the greatest enemy of all tournament players: fatigue. Day two was more of a “survival” day than anything else. Number 5: Beware the Trojan Horse The following “Shot in the dark” definitely wins the “amazing tactic of the day prize” for me simply because it’s sort of unexpected, sort of deep, and really cool. Always look for shots and always beware the Trojan Horse - just because you can take a piece doesn’t mean you should. The following example comes from the K-8 Championship round 3, where Sina Mohammadi had white against Advaith Prabu: Number 6: Dress for Success All weekend long on the USChess Twitter feed, Greg Shahade posted an ongoing montage of the “best dressed” competitors. The funny thing is - he never ran out of material. The well-dressed competitors were a step above the Nationals participants I remember from my own youth, where athletic shorts and a 3-sizes-too-big “Just Do It” T-shirt were en vogue. The times have changed, however. As National Tournament Director Chris Merli put it, “These kids came to play!” Number 7: Calculation Counts! In the final, and ultimately deciding (though not decisive) game of the K-8 Championship section, co-champions Danial Asaria and Wesley Wang battled it out in a well-fought draw. Both players had to flash some well-conceived tactical ideas in order to stay in the fight proving that even in cases of a split point, calculation counts. Number 8: Space, The Final Frontier No, not the “space” you might find Rey and Kylo flying through, but instead territory on the chessboard. Squares are the critical and often final frontier two players battle over. Take, for example, the following game from the K-9 overall winner, Maggie Feng, where she squeezed her opponent in the late middlegame and managed to convert the ending. That’s it! Chess Mamba Out. Like the kids, I, too, had quite the long weekend but was impressed with all of the competitors’ dedication to the game, hard work, and sportsmanship. Also see IM Greg Shahade's wrap-up report and full results here. Look out for coverage of the All-Girls Nationals (April 22-24) and Elementary Nationals (May 6-8) coming up.
SHARE: