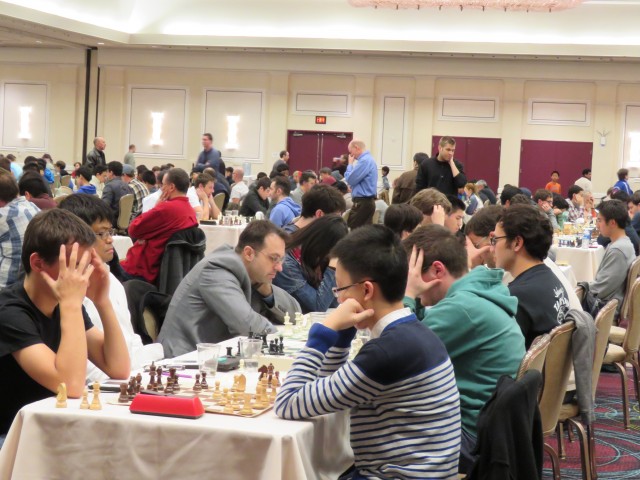 Continental Chess’s  25th Annual North American Open attracted a near-record 741 players to Bally’s in Las Vegas beginning the day after Christmas. The fine turnout generated a 112.9% increase in the announced prize fund, raising it to almost $135,500. The 108-player Open section included 12 GMs, 19 IMs, one WGM, and two WIMs, with 18 federations represented. Two experienced GMs and one youthful IM emerged on top with 7-2 scores. The second seed, Russian GM Alexey Dreev, 46, a fairly frequent guest in the US (Philadelphia and National Opens this year) was slightly ahead on tiebreaks and picked up a $200 bonus. 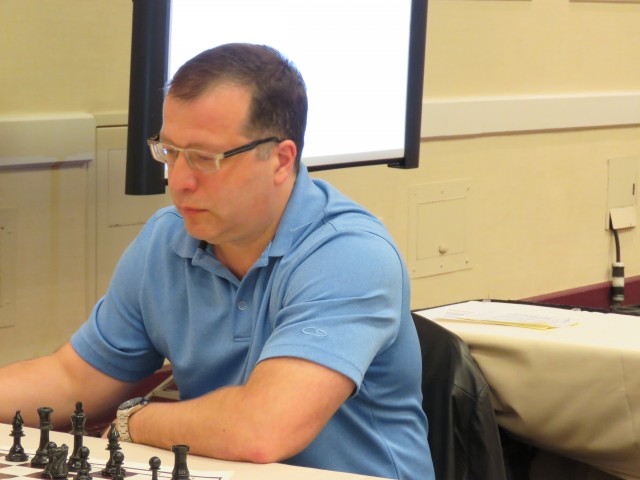 GM Alexey Dreev, Photo Al Losoff
Dreev took a standard route to the top. Not so for the other co-winners! Gata Kamsky, the top seed who’s been at or near the top of the US chess scene for 25 years (albeit with some periods of inactivity), yielded a draw to IM John Daniel Bryant in the second round, but even after further draws with IM Ruifeng Li and GM Jeffery Zhong in Rounds 5 and 6 he was just a half point out of first. Wins over FM Nicolas Checa and GM Victor Mikhalevski then left him tied for the top spot, and a quick draw with Dreev (and the “right” result on Board Two) secured a share of first place. The third player, 22-year-old Israeli IM Eylon Nakar, had an even more trying route to victory. He was upset in Round Two by FM Konstantin Kavutskiy, but then reeled off five straight wins, with Mikhalevski among his victims, and coasted in with draws against Dreev and IM Ruifeng Li (this draw was longer than that on Board One; Nakar would have gotten clear first with a win, and Li would have tied for first and gotten a GM norm). 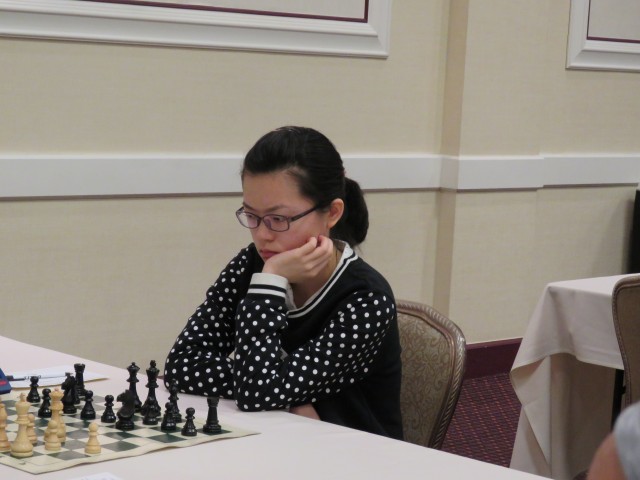 Mo Zhai* , Photo Al Losoff
Nakar holds a US passport but was making only his third appearance here (two November events in Dallas). His fine performance did not quite earn him a GM norm, as he played only two GMs. Nakar modestly says he had no “clear wins”; here is his Round 3 win in which he exploits Black’s errors on moves 21 and 22 to reach a winning ending. Dreev, a quarter-finalist in the 1997 world championship, expressed  great satisfaction with the tournament conditions in Las Vegas. In his favorite game, from Round 7, he gets an advantage after 8…g5?!. He likes the unusual knight maneuver beginning with 18.Ng1 (The computer? Not so much…). Black just gets outplayed in the subsequent complications with both kings vulnerable. Kamsky, a highly active player lately (and apparently the runaway winner of the Grand Prix), normally has worn his hair close-cropped. He made a major change in 2015; in 2016, who knows? He was also quite happy with the tournament, and, after toying with retirement more than once, admits that it’s hard to quit once chess gets its hooks into you. He’s venturing into some special projects in the near future. He called attention to his queen maneuvering from the queenside to h8 against FM Joshua Colas in the third round. 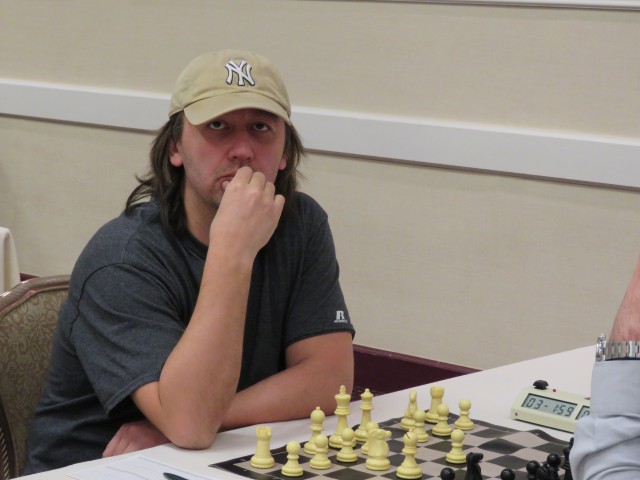 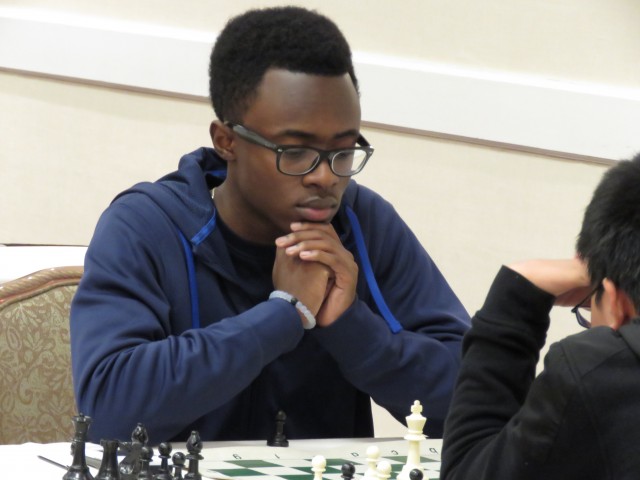 Josh Colas, Photo Al Losoff
And that brings us to a second focus – the triumph of youth in the race for title norms. Colas secured a GM norm with room to spare, and Wheeler got his second IM norm. Colas, 17, was seeded only 61st after some subpar performances, but kicked off with upsets of Barbosa and FM Joshua Sheng. He later took down WGM Jue Wang, IM Denys Shmelov, and GM Bai Jinshi, before drawing with Li and Jeffrey Xiong in the final rounds. (In the latter game, a win for either player would have added a name to the first place tie.) Here’s the Round 7 upset. Black’s risky pawn grab (5…c6 or 5…Ne4 are more circumspect) is duly punished. And in Round 5 against the Ukrainian IM, Colas uncorks an attractive opposite bishops attack after White begins to go wrong with 17.a3. Wheeler, 14 and a member of the Cupertino scholastic dynasty in Northern California, had a drastic win against GM-elect Darwin Yang, also in Round 7. Wheeler’s enterprising pawn sac secures a slight advantage, and Yang could have improved with 20…Ra7. 21…Qd6?? goes completely off the rails, and the denouement comes soon. 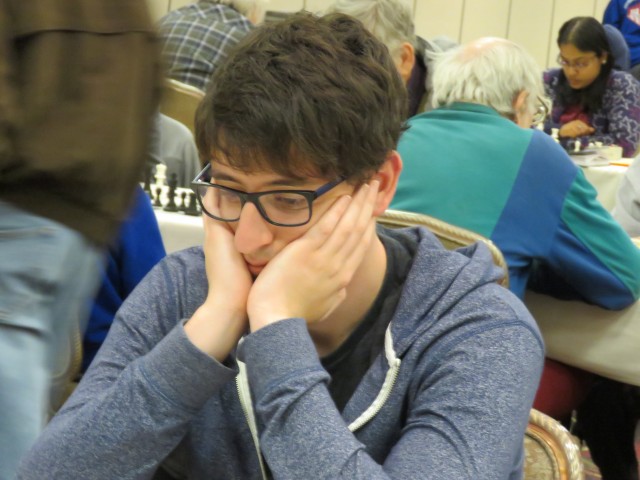 Kostya Kavutskiy,  Photo Al Losoff
Kavutskiy, 23, has ties to both Southern and Northern California, and occasionally writes for US Chess. This was his second norm. Here is afore-mentioned upset of Nakar, a gritty performance in which Kavutskiy is worse after 14.Qd2, recovers around move 20 and builds up a winning attack. But he falters with 43.Nxc7, a faulty piece sac after which it appears that 45…Nxb3 46.Qxf6 Bxa4 47.Qe6+ Qf7 48.Qxh6 Qe7 49.Ka2 Nc1+ 50.Kb1 Bxc2+ 51.Kxc2 Qe2+ leads to perpetual check. In the game continuation, White’s king finds safety and Black’s does not. Another norm went to 18-year-old FM Alexander Velikanov of Wisconsin, whose performance was impressive enough that even a last-round loss to FM Nicolas Checa (who in turn missed a norm because he didn’t play the requisite third titled player) didn't stop him. In Round 4, he gets a pawn and the attack after Black’s erroneous 15th move (15…c4 improves) and turns it into a winning endgame. Other IM norms were secured by FM Sean Vibbert of Indiana (his third, though he needs to increase his rating before the title can be awarded) and FM Michael Song of Canada. WFM Ramya Inapuri of Arizona got a WIM norm. As for the rest of the tournament…the Under 2300 section had a tie for first, with Conrado Diaz, Anant Dole, Nicky Korba, and Hugo Miguel Padilla scoring 5½ of 7. In Under 2100, a very active (this was his 67th event of 2015) 11-year-old, Samrug Narayanan of Minnesota, tallied 6½ to won by a point. This was the largest section, with 138 players. Under 1900 saw a five-way tie among Robert Asibor, Justin Liang, Jason Ochoa, Vikram Ramasamy, and Michael Su, who all scored 6. Texan Tharun Natarajan stood alone atop Under 1700 with 6½. In Under 1500, Nicholas Gross of Arizona achieved the only perfect 7-0 score in the entire tournament, winning by 1½ points and picking up 204 rating points – love those bonuses! A more modest score of 6 split Under 1250 honors between Kesavan Shan of Texas and Northern Californian Ryan Yao. And two teams tied for Mixed Doubles honors with 10½ out of 14: Adia Onyango-James and James Canty; and Daniel Bohnett and Stephanie Ballom. And the Blitz also had a great turnout: 176 players. Sixteen-year-old IM Andrew Tang of Minnesota went 9-1 in the Open section of the double round robin, finishing a half point ahead of Chinese GM Jianchao Zhou and the untitled Jianwen Wong of Malaysia. In Under 1900, 8½ earned clear first for ten-year-old Harvey Zhu of Houston. Such a large tournament is bound to generate an instructive anecdote or two. A top player who shall remain nameless sought to dispel the stereotype that GMs never bring equipment. However, he didn’t know how to set the clock he brought…and dispatched his opponent to find someone who did! One arbiter had a déjà vu when a player complained that his young opponent, facing immediate mate, wouldn’t move. The opponent explained that he had offered a draw, which had been accepted. “Did you offer it quietly?” asked the arbiter. “Yes, I didn’t want to disturb people.” “Well, your opponent assumed you were resigning – which is what I’d do in your position.” The young player then tipped his king, and the arbiter had the last word: “OK, now shake hands.” Hope his coach didn’t teach him that trick! *An earlier version of this article misidentified Mo Zhai.  Post-tournament ratings can be viewed here. Final standings, prize awards, and game file are here http://www.northamericanopen.com/  Thanks to Al Losoff and Breck Haining for photography and to Jon Haskel for inputting MonRoi games. Hope to see you at an even bigger North American Open  next December.
SHARE: