December Throwback #4: Premiers Across the US Roll out Red Carpet for Queen of Katwe

December Throwback #4: Long before Netflix’s “The Queen’s Gambit” riveted pandemic-weary viewers, strong female chess players were putting the world on notice. Today’s throwback revisits the premier of Queen of Katwe, the story of Phiona Mutesi, a young girl whose chess prowess took her from poverty in Kampala, Uganda, to opportunities around the world. Jay Stallings captured the chess world’s excitement as the movie opened around the country.

Bonus: To learn more about Phiona today, check out her visit to the Girls Club in February 2021: https://new.uschess.org/news/phiona-queen-katwe-mutesi-visits-our-girls-club-and-madwoman-book-club 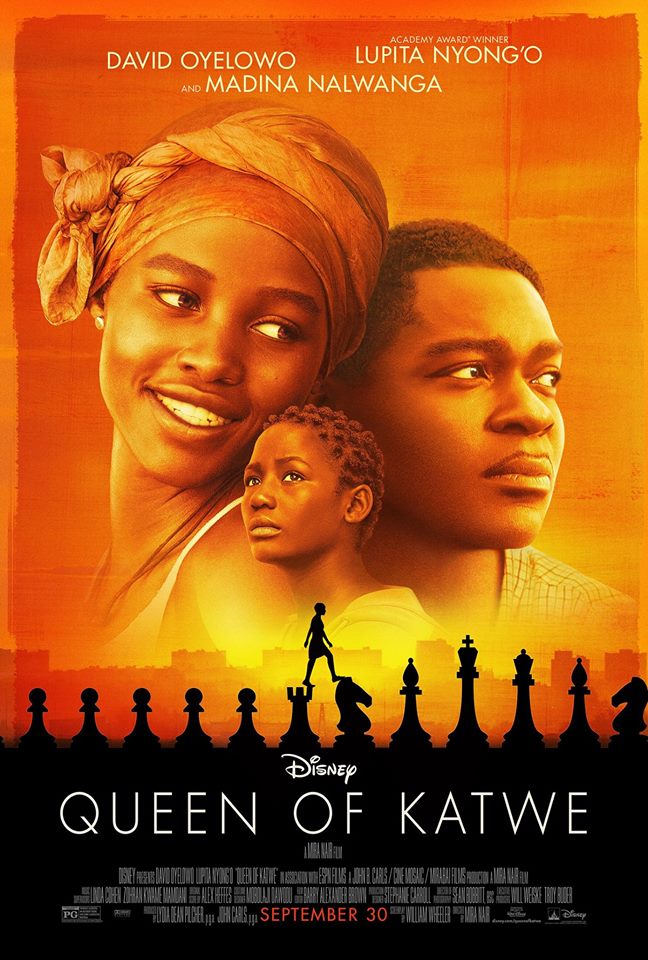 A real Queen’s Gambit! A Smothered Mate! An endgame technique to create a passer (I’ll let you be surprised)! AND, an inspiring story line with top-notch acting, expert cinematography, and plenty of laughs (and a few tears). That’s how a chess player might describe this unlikely story of a young girl from the slums of Kampala, Uganda who stumbles upon an opportunity. With Disney’s “Queen of Katwe” set to open nationwide in theaters on September 30th, advanced screenings and premiers (and the parties and activities that accompany them) have been popping up across the nation. Here’s a quick trip from coast to coast and back again!

Santa Barbara, California (September 7th) Santa Barbara and Katwe have a tight connection that did not come up in the movie. Without going into detail, the story of Phiona Mutesi would be very different if it weren’t for the generosity of the Popp family and those who support the Andrew Popp Memorial Fund. Their screening was the first in September, and it was a full house.

Atlanta, Georgia Frank Johnson, an Atlanta-area chess coach, reported that he had 60 students from across the state attend the screening at Phipps Plaza. The 220-seat theater was packed and late-comers found that there were no more seats. Frank loved the movie as did his students and their families!

Bellevue, Washington (September 12th) A private screening gave Chess4Life an opportunity to organize fun activities to help people learn chess. They also had items from Uganda (including an African drum autographed by Phiona and Robert) on display at the screening. Over 150 from Chess4Life attended. 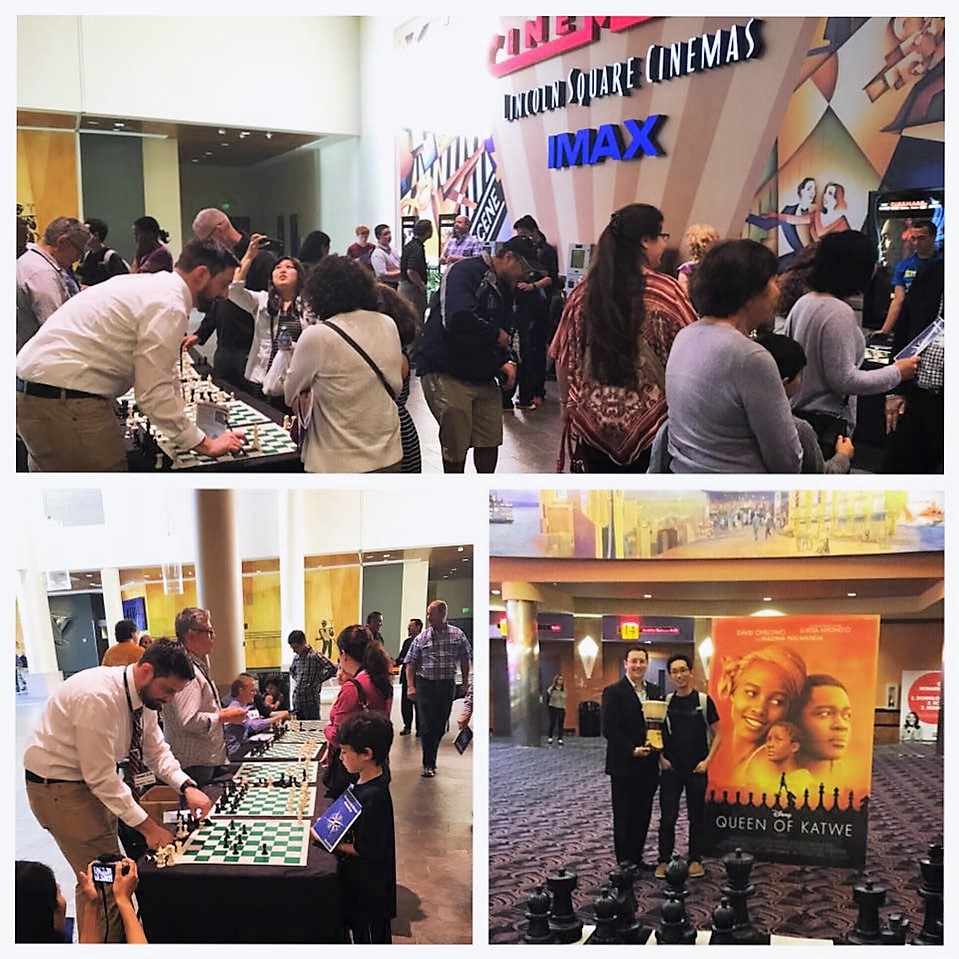 Note: Elliott Neff, CEO of Chess4Life has also helped get the word out for multiple screenings in London, Canada, and various parts of the U.S. Additionally, he has spread the word to groups whose email lists include about half a million people! A one-man marketing team! 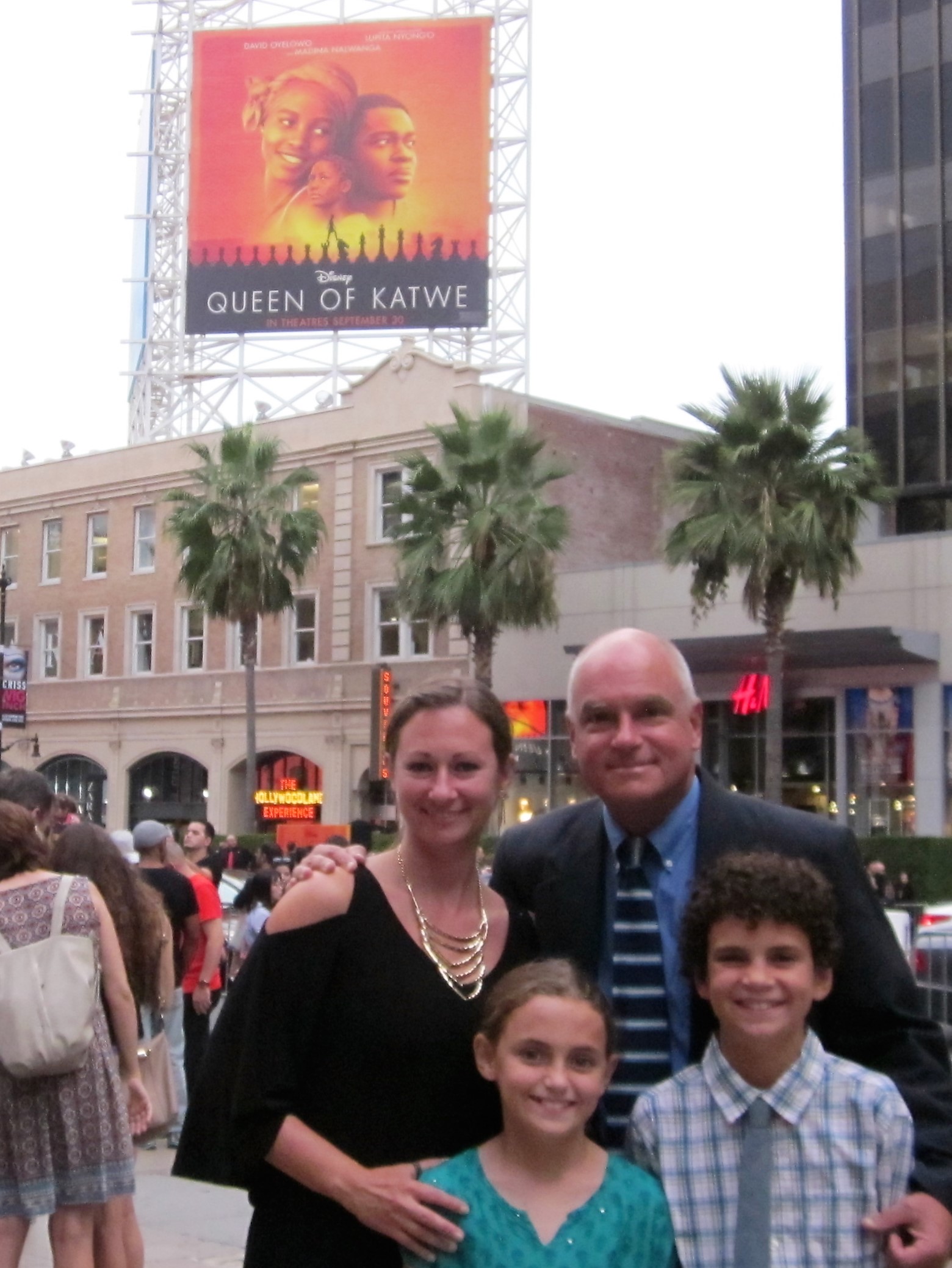 Queen of Katwe author Tim Crothers and family in L.A

Chapel Hill, North Carolina (September 13th) Several hundred attendees received two unexpected treats! Both were due to a communication error in that the theater did not have the code from Disney to run the movie! First, turning lemons into lemon meringue pie, “Queen of Katwe” author, Tim Crothers jumped into action and, as he tells me “people learned much more than they probably wanted to know about the stories behind The Queen of Katwe” as he talked for over an hour until the code was relayed and the movie started! Quite a treat for the movie-goers (I would have loved to have been there for that!) The second treat was also a welcome surprise – free food and beer with apologies for the delay, courtesy of Disney. Some attendees (not those enjoying free beer) were members of the chess club that Phiona initiated at the grade school where Tim’s children attend. Tim said that at the Q & A, one of the kids asked if he and Phiona had ever played chess. He told them “Yes we have. Now raise your hand if you think I beat her.” A wise (chess-playing) audience correctly kept their hands in their laps.

Vienna, Virginia (September 18th) Many young chess fans were among the 300 in attendance at Tyson’s Corner in Vienna, Virgina where Robert & Phiona took questions from the audience before the screening. Chess groups from DC and Northern Virginia joined in. After the movie, some of the supporters of Sports Outreach (the ministry that started the chess program in Katwe) were treated to a visit by Robert & Phiona at a local country club.

Denver, Colorado (September 19th) Several members of the Denver Chess Club went to the screening. After the movie, Life Master Brian Wall gave his glowing review: “The movie is 20 times too good for a Chess movie. We are unworthy.” For the post-movie Q & A, members of the audience joined via satellite and could use a hashtag to tweet questions to the director (Mira Nair) and actors Lupita Nyong’o and David Oyelowo.

Valencia, California (September 18th) The young girls (over 40 of them) turned out for “Chess ‘n’ Yogurt” before the screening sponsored by Coach Jay’s Chess Academy and California Youth Chess League.  The full-size theater (288 seats) only had available seats in the front rows by the time the movie started! 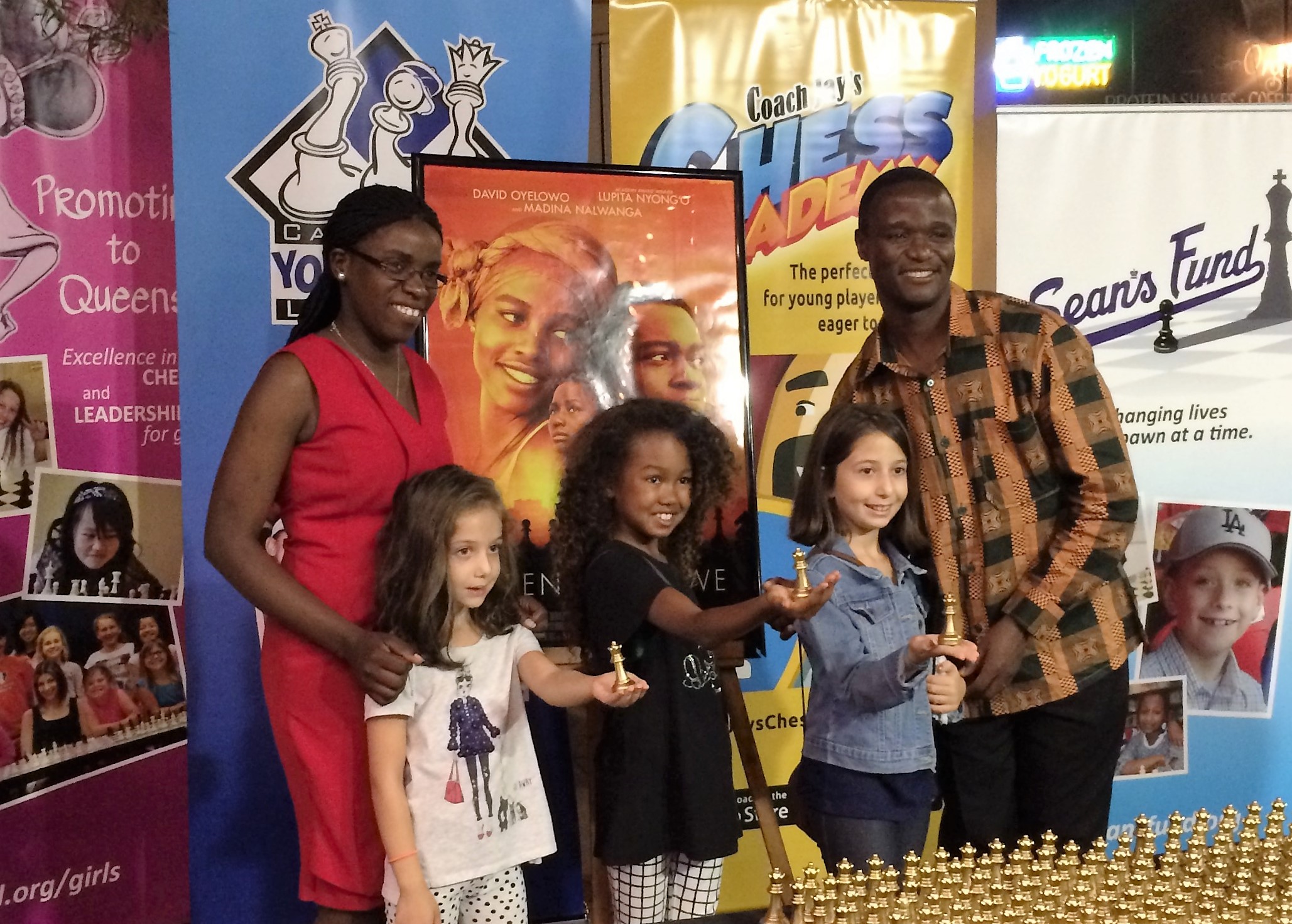 Phiona and Robert were very welcoming and warm.

After the movie, I introduced Robert & Phiona to a long standing ovation. Following a 15-minute Q & A, Robert & Phiona graciously took photos and signed autographs for at least another 30 minutes. The gold queens were a huge hit (donated by the ever-generous “Father of Scholastic Chess in Southern California” Dewain Barber). 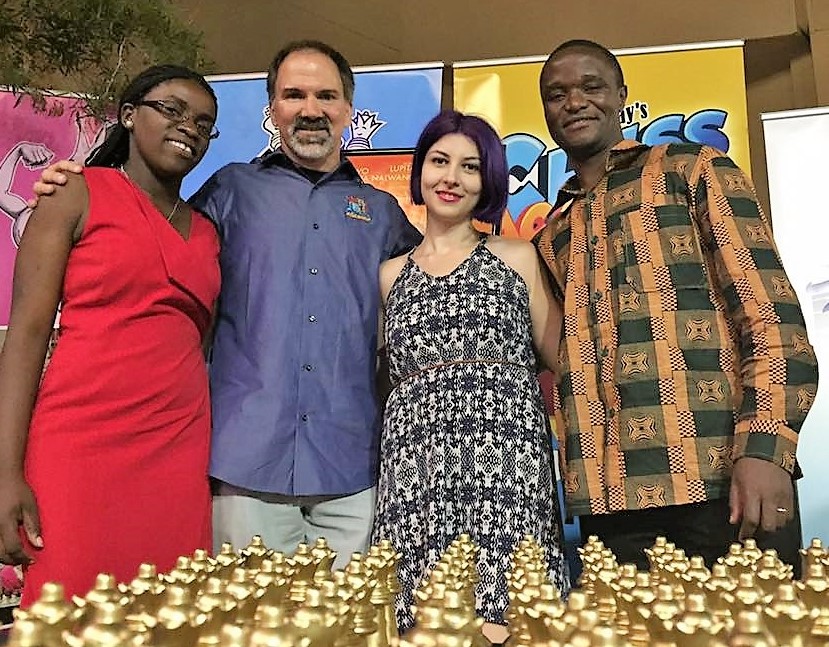 Irvine, California (September 20th) Held the same night as the L.A. Premier, Fundamental Chess showed up in style with matching t-shirts and big smiles from the students and coaches Jared & Derek Tan. Dewain Barber brought his gold queens there as well! 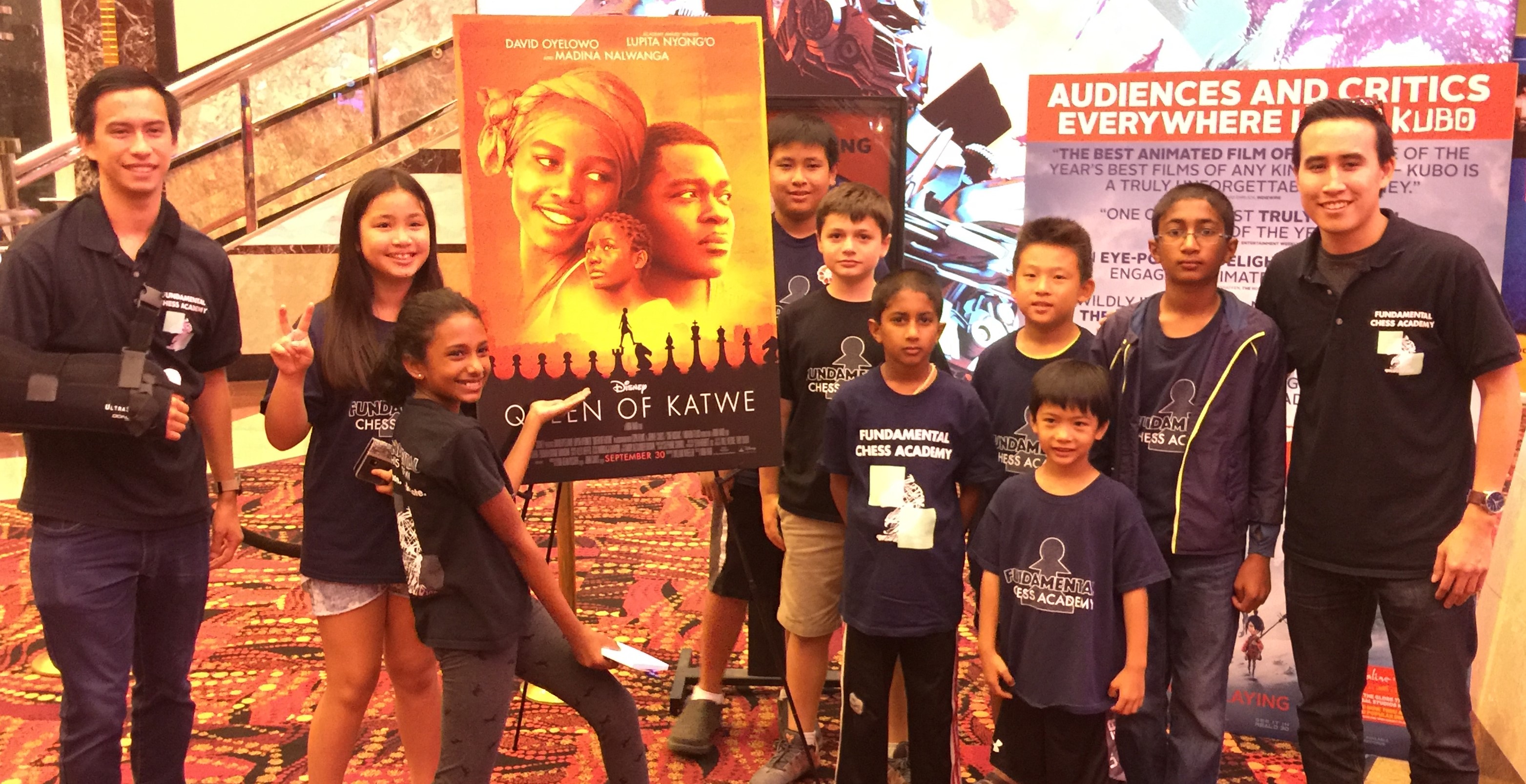 Hollywood, California - L.A. Premier (September 20th) Everything you would expect in a premier, plus three chess players (a young GM, a middle-aged Master, and a 50 year old Expert!), the L.A. Premier featured a red carpet, dozens of TV interviews, scores of paparazzi, and hundreds of adoring fans! It was my first real Hollywood Premier, and it lived up to the hype. Super-tight security, free popcorn buckets and bottles of sodas or water, an organist playing Disney (and Star Wars) movie songs, and a post-party across the street at Hard Rock Café. It was fun when they stopped the traffic on Hollywood Blvd to let us walk safely past the cars and throngs of movie fans and into a party with servers holding trays of beer, wine, and champagne. 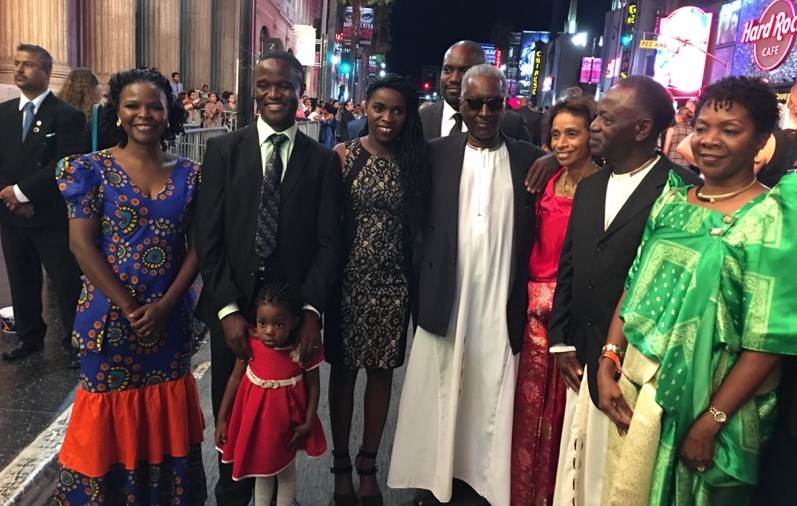 At the party, I ran into the ever-friendly GM Daniel Naroditsky and NM Elliott Neff. Daniel is playing simuls all weekend at the same theater as the premier (El Capitan). Elliott had worked with Phiona before a previous Olympiad, and visited Uganda this year to help the Women’s team prepare for the 2016 Olympiad. 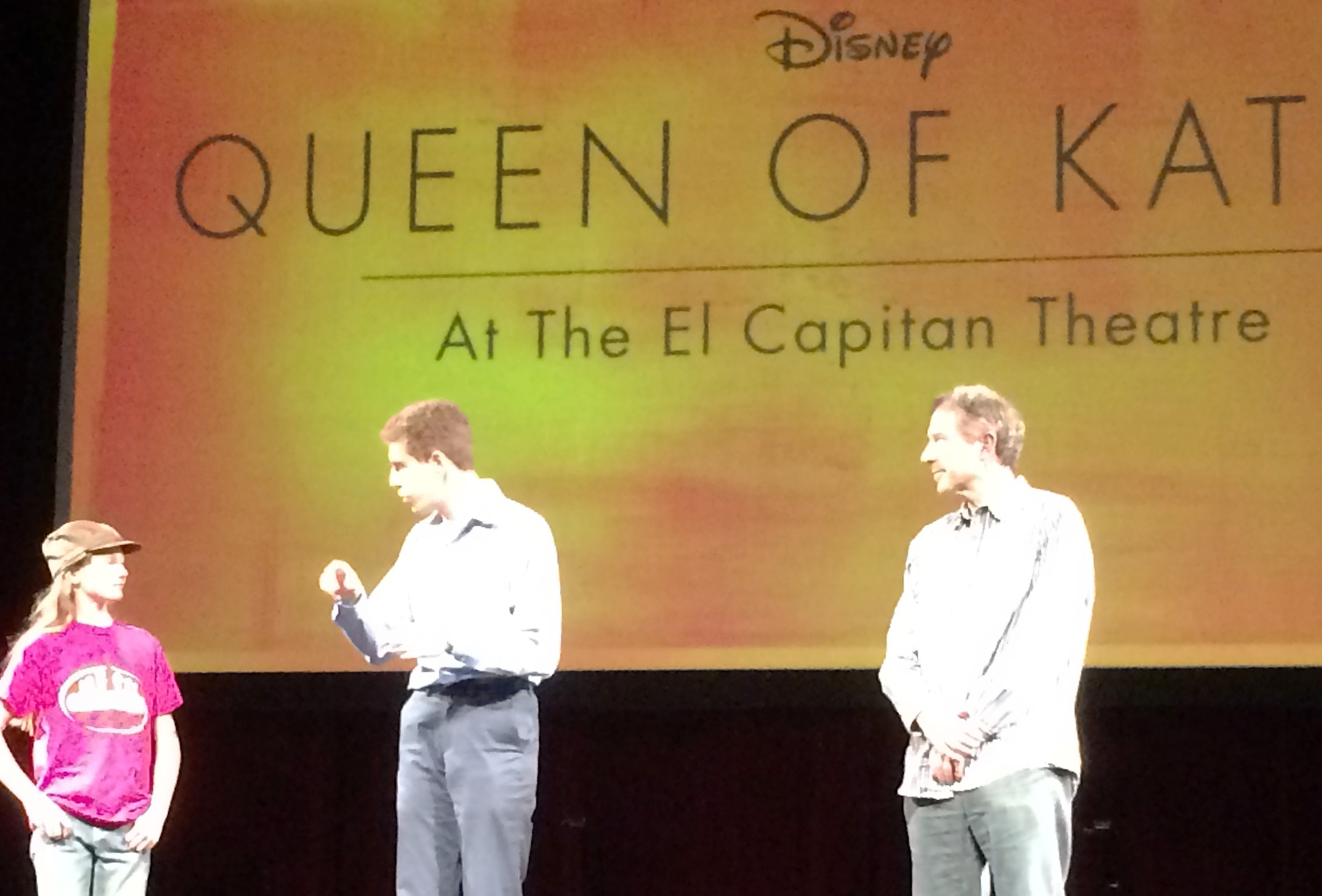 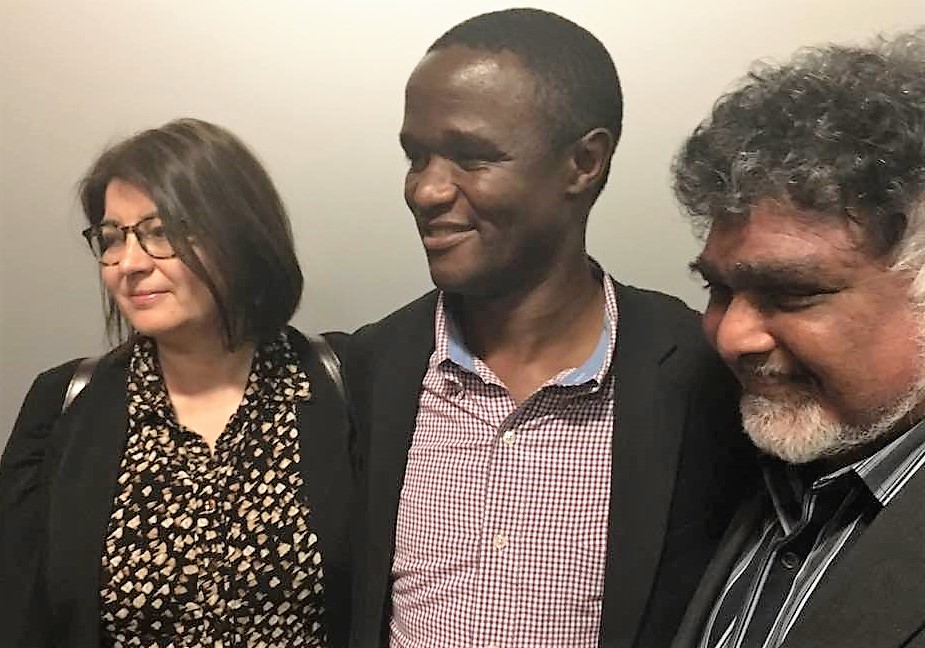 The big guy (Magnus) showed up for this one as the post-movie Q & A included the World Champ, Robert Katende, his movie stand-in, David Oyelowo, and Phiona Mutesi. 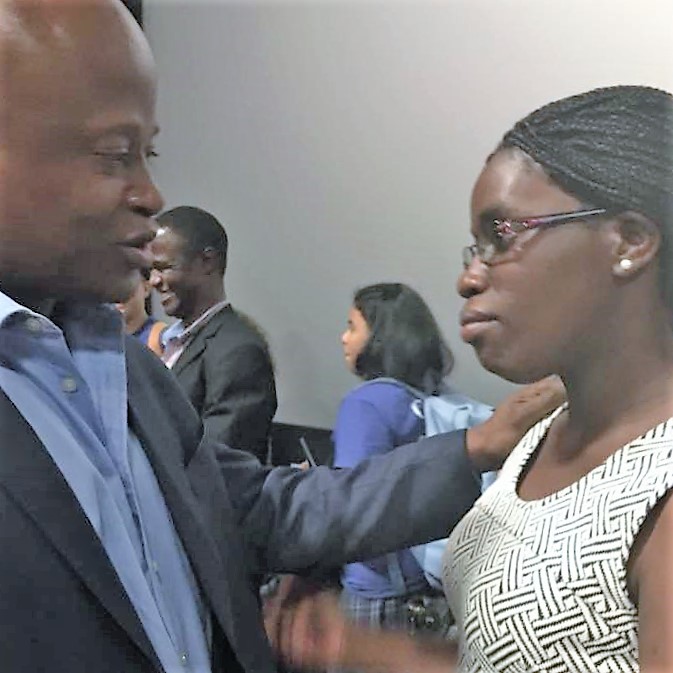 These two have inspired so many in our royal game!

Like most reviews I have seen, the New York Times raved about the movie: http://www.nytimes.com/2016/09/23/movies/queen-of-katwe-review.html?_r=0 This is more than a movie – it’s an event! Bring your chess sets and play before and after the movie. I’m sure movie-goers will want to know where they go to learn and play chess in your area, so bring your business cards or club flyers!

Central Florida (Added on 10/7/16) by Harvey Lerman Our August Tornado chess tournament was held on the campus of University of Central Florida (UCF) in the Education Building. Everyone there was excited when I announced Disney's Queen of Katwe movie would be screened in a theater near the university and that would all be invited to attend. I passed out the tickets and Kevin Sibbitt, who takes photos of the chess event, took the following picture. (I am the one standing in the back.)

As you can see we have players of all ages. In this 1-day chess event there are 4 rounds of chess. The tournament continued and by 8:30pm there was one game remaining. The top two players were battling it out on Board #1 while most of the other players had left. This game lasted well over 70 moves and the players were very short of time on their chess-clocks. Luckily the time control used had a 5 second delay (the clocks don't move for 5-seconds, giving each player a little cushion when time is almost over. Finally the game ended, and the winner was Martin Hansen (rated 2070). He was awarded four extra movie tickets. 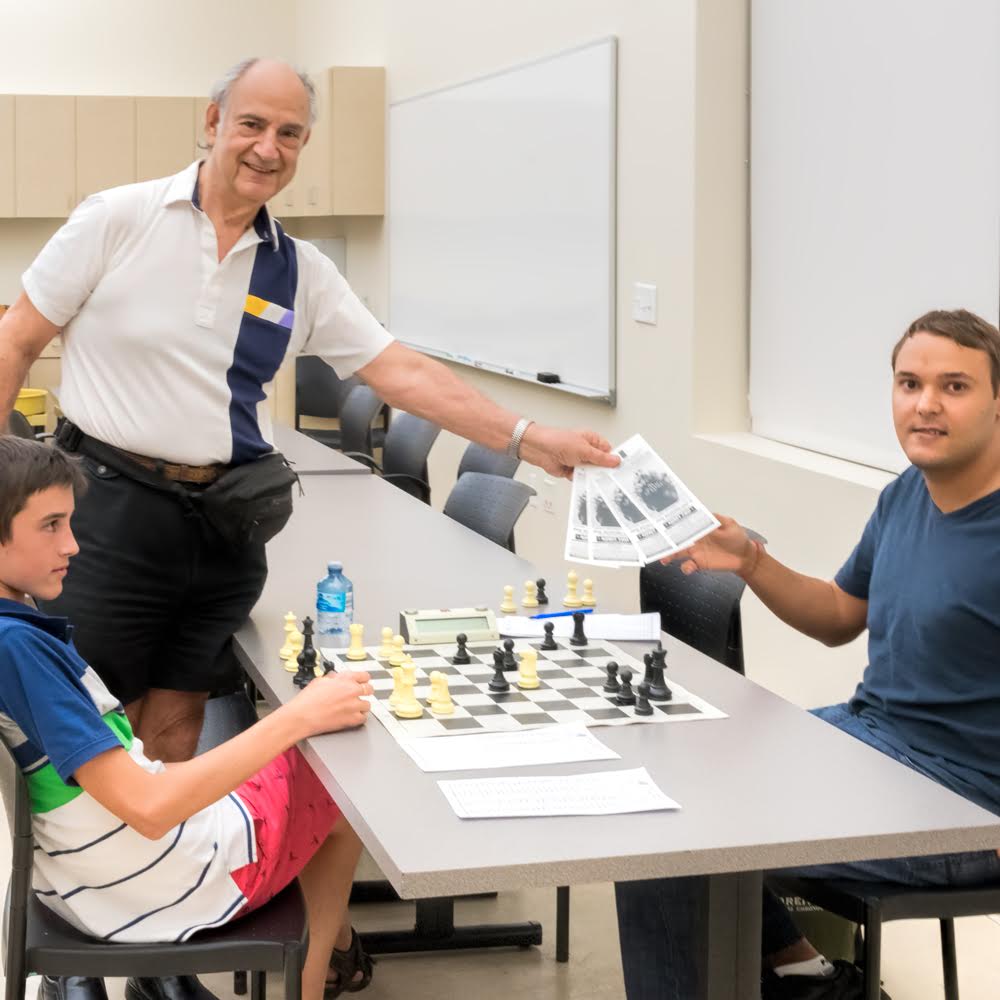 I am handing Martin the four bonus tickets for finishing 1st (He also won $200 for that), his opponent Theodore Slade (rated 2023) finished tied for 2nd and he was awarded two bonus movie tickets. Everyone appreciated the opportunity to play in this event and the opportunity to later attend the screening of this chess movie. 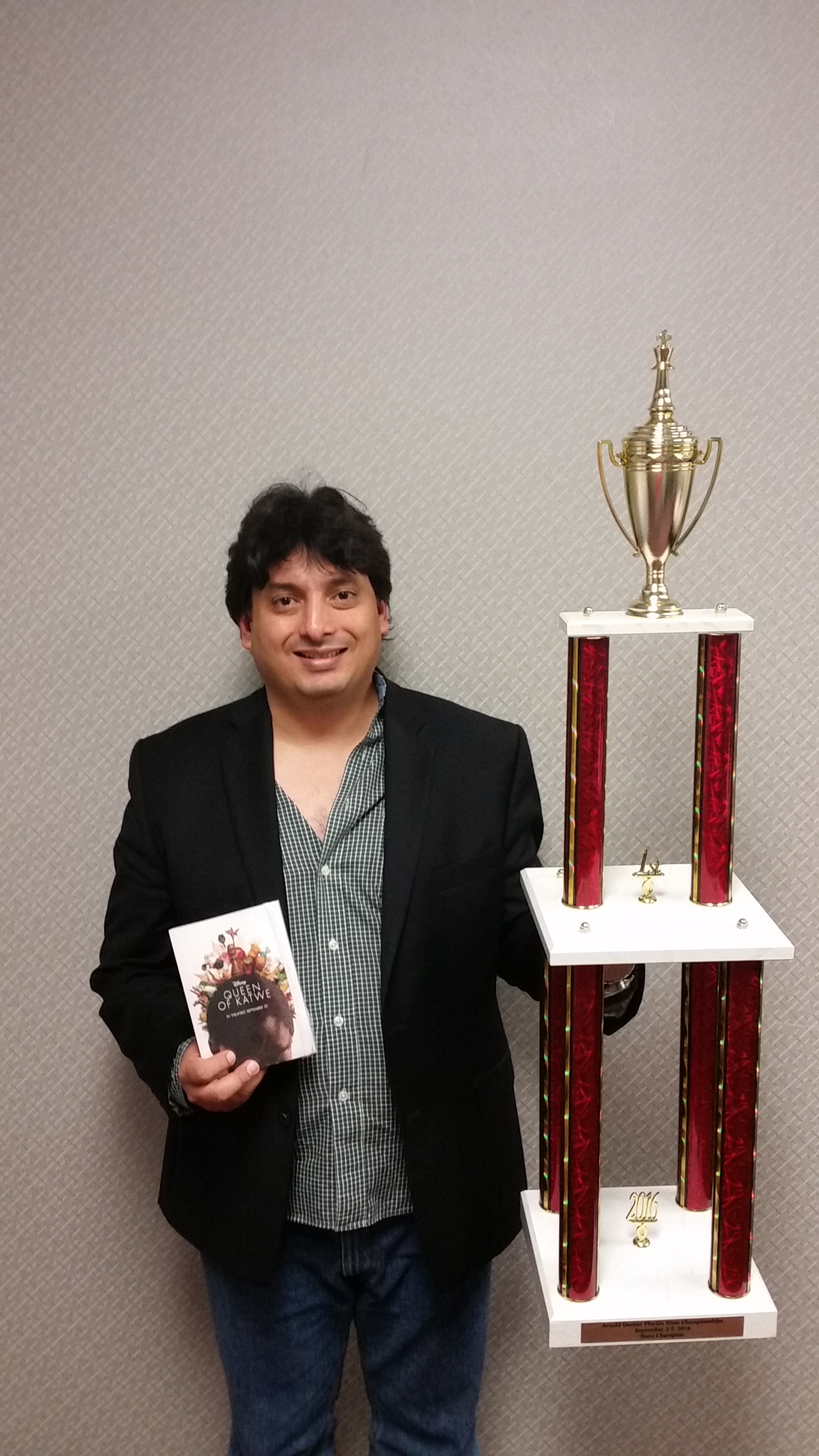