December Throwback #1: Why Is Carlsen Dominant?

First up, in honor of the current World Championship match, we present a “Best of CLO 2015” winner by GM Cristian Chirila, in which he theorizes about the positive and negative anchors behind Magnus Carlsen’s success. Given Carlsen’s unbroken World Champion streak since this article was published, we thought this look back might provide some insight into what makes a world champion. This article was originally published on August 22, 2015. 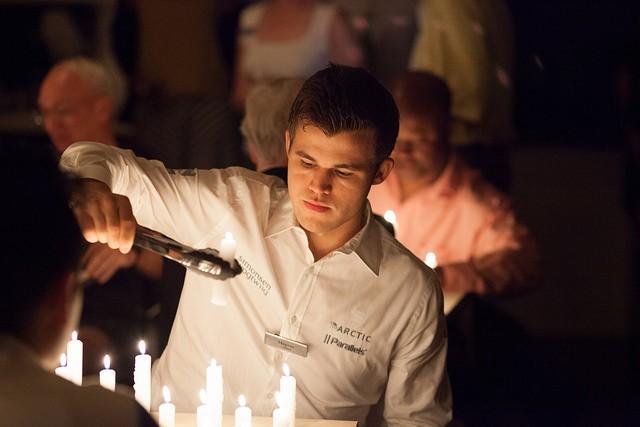 Throughout the history of chess there have been very few individuals who have managed to dominate the chess world. Among them we can recall names such as Bobby Fischer, Garry Kasparov, and more recently, Magnus Carlsen. Many will argue that Carlsen’s dominant reign is just starting and that there is nobody on the chess map who could possibly pose any problems in the near future. Carlsen himself said in one of his recent interviews that he had expected for a long time that somebody would stabilize above 2800, but nobody did. That stratospheric number is still one where the oxygen rarifies and not many can maintain a constant presence.  [Fabiano] Caruana is the latest example; he skyrocketed to 2844 and immediately plummeted almost 50 points.

While some would attribute Carlsen’s dominance to his style of grinding down his opponents until they crack under pressure, I would like to go beyond that and try to understand why so many of his opponents lose positions in which you would expect the players to shake hands and sign the score sheets for a draw. I have seen this countless times, and the ability with which Carlsen manages to overcome these barriers is simply out of this world. Nobody at this time can do that as often as Carlsen does it. It seems to me that this type of game outcome has become a habit of both Carlsen and his opponents. But why?

My answer to this question lies behind a tool that has been used by sport psychologists to increase the potential of their athletes called the anchor effect. There is no doubt that between the mind and the body there is a powerful connection; therefore, as long as we manage to build specifically crafted links between the two, we can enhance one’s potential and get the best results possible. The concept of anchoring was first brought into discussion by Dr. Ivan Pavlov’s notorious experiments on dogs, where he proved that he could condition the animals to salivate before they were shown any food just by ringing a bell. The same stimulus àresponse type of behavior can be conditioned by sportsmen to perform at their best capability. Great performers often have a large number of conditioned stimuli that help them achieve full potential, and they allocate extra time to create and enhance these anchors. So what are the world champion’s secret weapons? 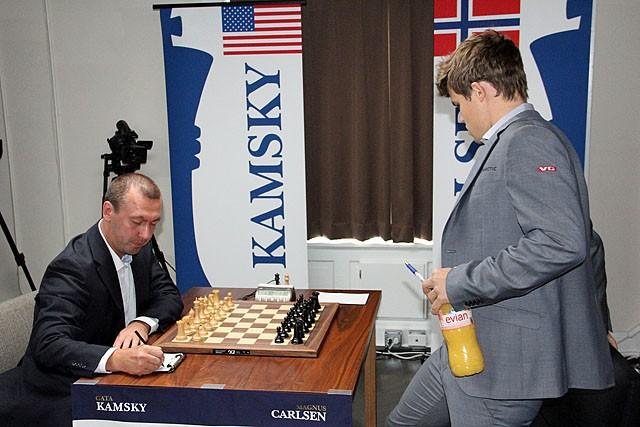 At the 2013 Sinquefield Cup, Kamsky vs. Carlsen, Photo Daaim Shabazz at chessdrum.net

One of Carlsen’s main anchor was, until not so long ago, his infamous orange juice. That juice placed in a water bottle not only was his beverage of choice, it also was a powerful anchor that reminded him of the times he reached the pinnacle of his performance. Just by interacting with the bottle during the games, he reinforced that stimulus which triggered the desired response: not to lose focus and determination. The one important characteristics of anchors is that they fade in time; they lose their stimulus effect and therefore they become useless. In the case of Magnus, the orange juice stopped giving him that sought reinforcement and therefore he started looking for stronger anchors.

In recent times we have seen the world champion always looking for a sunny escape before his important tournaments (as in the Hamptons before his trip to St. Louis). I believe that he attached a great anchor to his travels, using that time to prepare mentally and remember how he felt when performing at his peak (stimulus). The response has been amazing. Carlsen has won almost every tournament he has participated in the last year, including three world championship titles and a few Grand Prix honors. Let’s see a few examples when Carlsen uses his well-known technique.

It is hard to find holes in the world champion’s shiny armor; nevertheless, he has had a few moments in which he seemed to be a part of the mortal ranks. His performance in Norway Chess 2015 comes immediately to mind. He also had singular failings in the third round of four consecutive events in the 2014-2015 season! Carlsen has attached a very dangerous and negative anchor to these third round encounters. During these games he chose openings uncharacteristic to his style that landed him in very difficult situations where his resilience and competitive determination did not seem to be at the same level as he accustomed us to see. He himself had a good “laugh” with his Twitter followers about this:

These negative anchors can be quite detrimental to one’s personal results, but if they are recognized then it will be much easier to eliminate them and even replace them with positive ones.

How you can build your own anchors

If you don’t have the option of consulting a professional sports psychologist, there are easy ways in which you can create your own powerful anchors. Here is an example:

1.      Choose and think of a distinctive stimulus. This will be your anchor and will trigger the desired response. This can be as simple as a hand squeeze, an eye roll, or whatever your imagination can come up with. The most important thing is that this anchor triggers only the specific response attached to it.

2.      Think of the last time you performed at your maximum potential. Now think of how you felt during that time (mentally and physically) and try to emulate those feelings.

3.      Now it’s time to launch the anchor. This will create the link between the state of mind and the personalized trigger.

4.      Now completely break the state you were in. Think of a completely neutral subject and completely detach yourself from the previous mental state.

5.      Repeat this process at least three times; this will install the anchor into your system. The more you use the anchor with good results, the stronger the anchor will get. Whenever you feel good about your performance, launch the anchor and it will create the desired bond.

Now that you know an easy way to develop your own anchors, let’s see where that takes you. Athletes who create strong anchors will have a substantial advantage over those who don’t have this tool in their arsenal. This one is for those professionals who want to test the anchor effect. If you manage to ever solve a specific problem, make sure you attach an anchor to it. This is one of the toughest practical problems I’ve ever attempted to solve, but I guarantee the positive feeling you will get from finding the solution will be a powerful asset to your anchor arsenal. Good luck! (The solution is below the diagram, so be careful how far you scroll down. ~ed.) 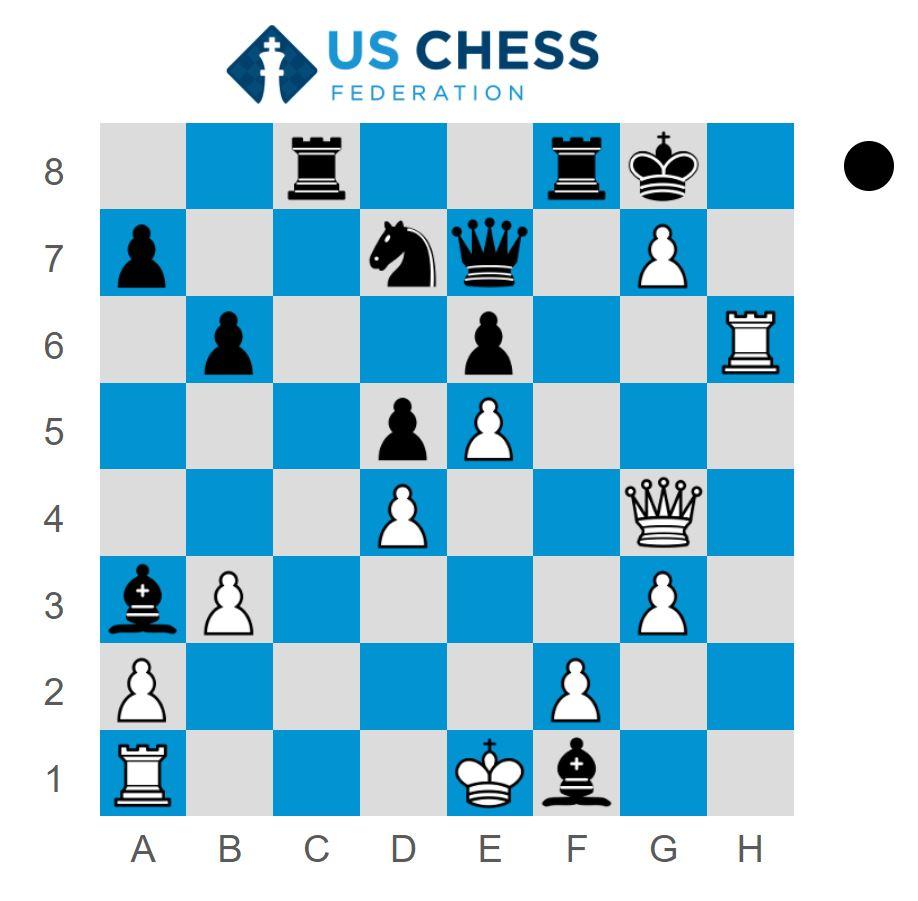 Scroll down for the solution!