D, But Still for Draw in World Chess Championship 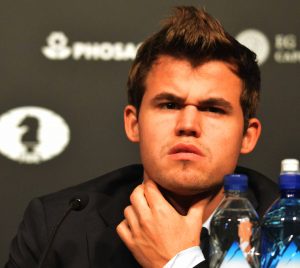 Today in New York City, spectators packed the house lining up around the corner in near freezing weather to get a glimpse at the World Chess Championship. The 3-3 deadlocked match has tickets sold out through round 10. With all draws so far in the first six rounds, spectators hoped for high drama, theoretical novelties and more celebrities. Actor Gbenga Akinnagbe known for roles in The Wire (Chris Partlow) and Taking of Pelham 123 played the ceremonial first move,  1.d4. Talking to GM Judit Polgar as the game progressed, which featured 1.d4 by Karjakin as well, Akinnagbe said, “The whole time it is psychological, if you know someone well enough you can predict how they play.” In the opening, Carlsen surprised Karjakin with a novelty 10… Nc6. This move was the computer’s 3rd move and Karjakin spent a considerable time looking for the best response. But, then in a strange turn of events, Carlsen missed a move deep in a combination and lost a pawn! This was not end of the game however as it was quite hard for Karjakin to prove any advantage and a draw was agreed on move 33. 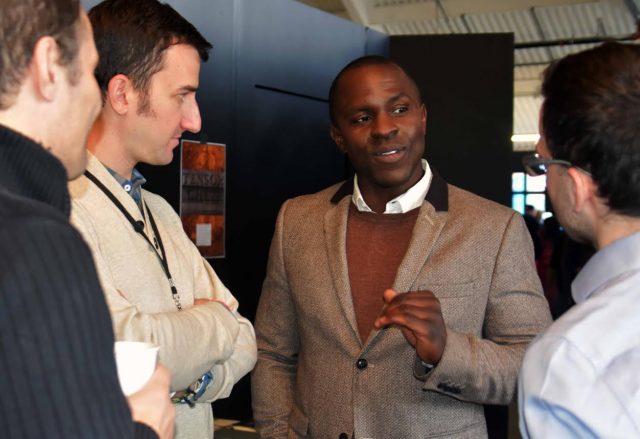 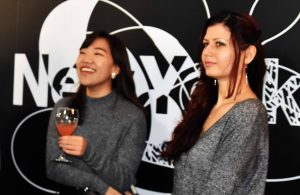 When asked what she thought of the game FM Alisa Melekhina said, “At least there was a material imbalance. At this level most games are going to be drawn.” She stressed the finesse in playing this type of match and playing games that cannot always be won by brute force. At the press conference for his part Carlsen said, “It is unusual that every single game have been a draw. But, I don’t think this will happen from now on…” With White in Game 8, will Carlsen score the first win? Stay tuned as GM Cristian Chirila takes over for US Chess reporting tomorrow!