The Competitive Fire of Stephen Stoyko

It took a special challenge to tempt FM Stephen Stoyko from the warmth of Winter Haven, Florida in mid-February, but the former New Jerseyite has always had a warm spot in his heart for the USATE, which celebrated its 50th anniversary this year. 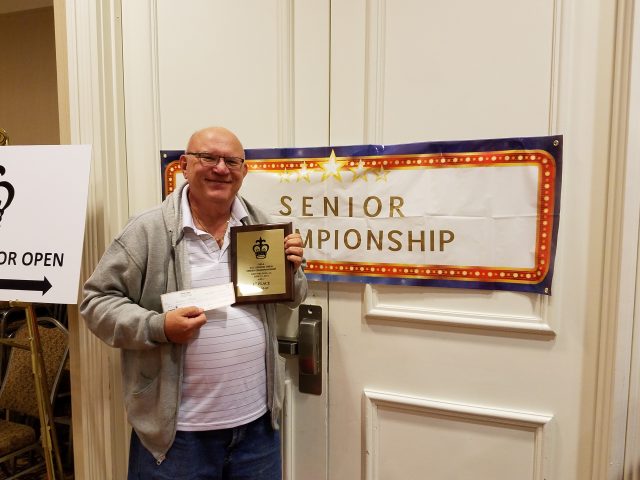 Stephen Stoyko in 2016
“I have only missed a few of these and there are not as many opportunities to play competitive chess where I am currently living,” said Stoyko, representing his new home state in a Florida Gators hoodie. One of the few Americans to win both the US Junior and US Senior Championships, Stoyko did not leave Parsippany empty handed. Playing his customary first board, Stoyko delivered a clutch sixth round victory to lead his team “Dangerous Old Men” to the Best Senior Team award. It was the second straight year that Stoyko’s team earned the Senior Team title. Stoyko was first board for the 1978 title team Westfield Winners. This year he joined longtime friend and former Hillside Chess Club teammate Scott Massey along with Thomas Colure and Mauricio Camejo. “I have always taken the choosing of a team for this tournament very seriously,” said Stoyko. “I can usually hold my own with just about anyone on board one. I look for strong players on two and three and try to find an underrated tiger on board four.” The strategy worked as Camejo and Massey both scored 3.5 points and Colure was nearly perfect with 5.5 on board three. Their only blemish was a narrow third round loss to “Check P.P. Per Move.” Stoyko, who scored 4.5 points to boost his rating from 2224 to 2241, lost his only game to Justin Chen (2374). “I didn’t sleep well on Saturday night and was not sharp in the early part of the game, but he played well,” said Stoyko, who at the advanced age of 72 still has the competitive fire, if not the meticulous accuracy, of previous years. As recently as 2016, Stoyko shared the US Senior title with IM Mark Ginsburg , each scoring 5.5 out of 6. Stoyko’s only draw was with GM Alex Ivanov. In 1968, Stoyko shared top honors at the  US Junior Open Championship with John Anderson, a tournament that included IM Jack Peters. Among Stoyko’s many accomplishments are three New Jersey Championships, won in 1973, 1983 and 1988, along with eight shared state titles. It has been a long and successful career for Stoyko, who started playing chess as a high school sophomore at Seton Hall Prep because of an outbreak of Impetigo that caused the wrestling season to be suspended. “I needed something to keep me busy without wrestling so I began to study and found some success,” recalled Stoyko, who is headed back to the Sunshine State until the next challenge. Stoyko showed he can still play brilliant chess with this first round brilliancy over David Siamon (2178) of Virginia. The annotations are his.
SHARE: