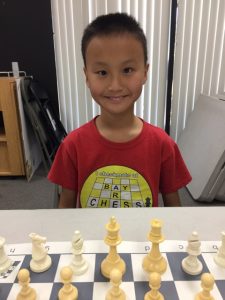 9-year-old Christopher Yoo made US Chess history at the 9th David Elliott Memorial on November 19th, when he broke the 2200 barrier, 30 days shy of his 10th birthday on December 19th. Yoo broke Max Lu's previous record for the youngest American master by two days. The event, which was just confirmed on US Chess's MSA, was held in Allentown, PA and won by GM Bryan Smith. This victory over Antonio Scalzo (2225), put Christopher over the top. Yoo told US Chess that he stopped notating when he got down to five minutes, at which point he had a winning position. And here is one of Christopher's favorite games: Christopher's upcoming plans include playing in the US Amateur Team West for the Bay Area Chess team and participating in the SuperNationals. When asked about advice for other aspiring US Chess masters, Yoo advised players to focus on tactics till they reached 1500, and "do them in your head without moving pieces around." Specific recommendations include chesstempo.com, CT-ART and lots of repetition on relatively simple tactics, like the ones in Susan Polgar's book. 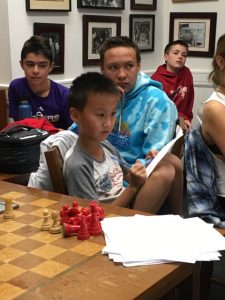 Christopher's father Young-Kyu Yoo said, "IM Emory Tate once told us “all chess is good chess” and though we try to avoid having Christopher, say, play bullet chess right before a big tournament, we do let him play all forms of chess in general as it encourages his love of the game.  Curiously however, though he loves blitz and bullet now, he did not use to enjoy them because he hated blundering and making what he called “hand slippers."" The Yoo family wants to thank all of his coaches and supporters, including: Christopher's dad also gave some insight into his son's early development: "I’ve always loved chess (played some tournaments in college) and read books on chess history before Christopher was born, and I remember stories of prodigies like Capablanca learning the game at unbelievably young ages from simply watching others play.  This wasn’t the case for Christopher.  I tried to teach him chess at age 5 but he couldn’t remember the names of the pieces let alone how they moved so I gave up.  A year later, when he was 6 years and 9 months old, we enrolled him in a once-a-week after-school chess program at his elementary school and after a couple of weeks I thought, great, I can now sit down with him and play a game.  Unfortunately, that wasn’t the case.  He didn’t know how the knight moved and his bishop refused to remain on one color.  So I taught him how those pieces moved myself, but it wasn’t easy.  But once he got the hang of it, he really took off.  Within four months he was 1st grade champ of California.  In another 7 or 8 months he was at 1700/1800.  A couple of years after that, master.  He is often slower than most to learn simple, basic stuff.  But once he gets it, there is no stopping him. In general, he seems to learn differently than most kids.  My son and I watched the “Magnus” movie together tonight at a theater in NYC and I was struck by something Magnus’s father said early in the film…something to the effect that he was worried about his son’s early mental development because he had trouble following simple physical directions.  That’s so true of Christopher. "
SHARE: