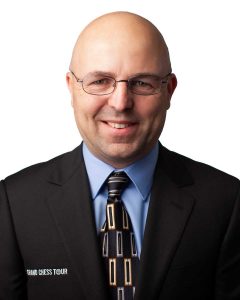 Chris Bird. Photo courtesy of the Saint Louis Chess Campus
Effective November 1, Christopher Bird joins US Chess as the FIDE Events Manager. Chris is an International Arbiter (awarded 2010) and National Tournament Director (awarded 2012) who has been chief arbiter of the U.S. Championship, Sinquefield Cup, Saint Louis Rapid & Blitz, SuperNationals VI and the Las Vegas International Chess Festival. He has also worked at numerous other events over the past 20 years as an organizer, tournament director/arbiter, live chess broadcaster and/or bulletin editor. Bird replaces Grant Oen, who left US Chess on September 30 to devote more time to his work with the Charlotte Chess Center, the US Chess Club of the Year. Executive Director Carol Meyer says, “I thank Grant Oen for his contributions to US Chess as FIDE Events Manager. We are grateful for his work and look forward to crossing paths in the chess world.” 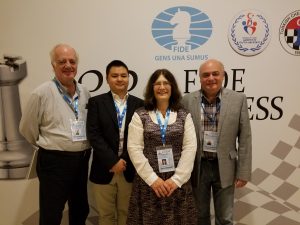 Grant Oen, second from left, with Walter Brown (far left), the late WIM Ruth Haring, and Michael Khodarkovsky at the 88th FIDE Congress in Antalya, Turkey in 2017.
Born and raised in Hull, England, Chris moved to Las Vegas, Nevada, in 1998 and has lived in the U.S. ever since, moving to Boston, Massachusetts, in 2006 and working at Harvard Medical School as an administrative coordinator since 2007. Chris is also a former president and board member of Nevada Chess, Inc. and former general secretary and league secretary of the Hull and District Chess Association. Bird says, “It has always been an ambition of mine to move into the chess world on a full-time basis and I am very excited about the opportunity to continue US Chess' support of both players and arbiters in relation to FIDE events and, once I get comfortable with the current systems, hopefully offer some ways to expand and increase that support.” US Chess Director of Events Boyd Reed states, “Chris’ highly organized management style, his knowledge of FIDE and chess issues, and his already extensive network of international connections made him the leading contender in an extremely competitive application process. We are fortunate to have such a great successor to Grant.” Chris’ email address, which won’t be active until November 1, will be Christopher.Bird@USChess.org. In the interim, anyone with FIDE questions for US Chess should email FIDE@USChess.org. The key responsibilities of the FIDE Events Manager include:
SHARE: