CHICAGO, IL:  More than 200 chess players from the Chicago-area, the Midwest, and other areas across the United States participated in the first virtual chess match between Israelis in a virtual International Solidarity match on December 13. The competition is part of an international chess series  run by Lior Aizenberg, founder of the Chess4All Chess Club. 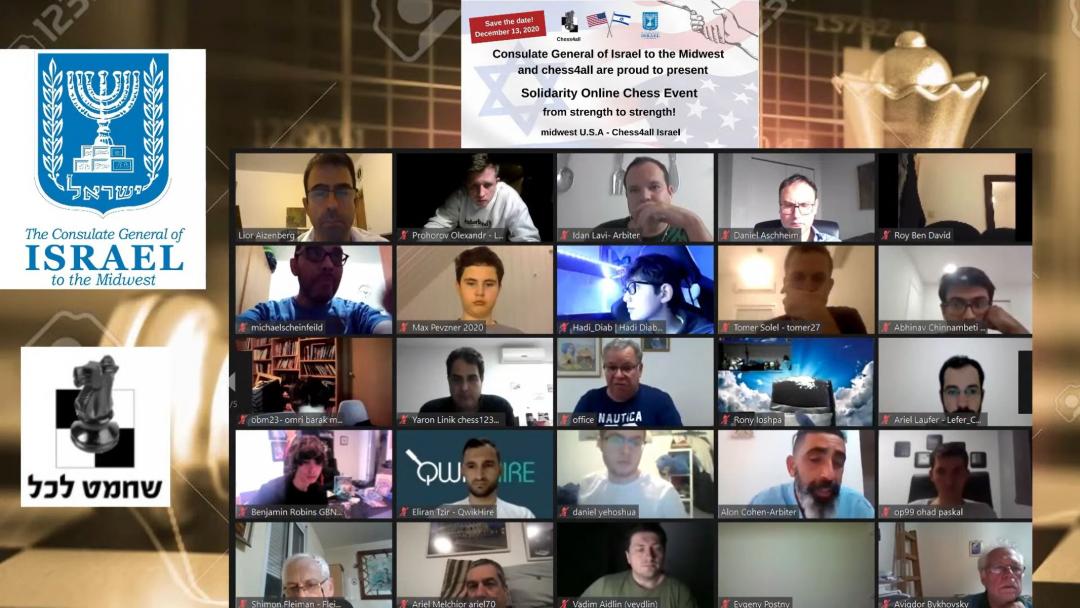 Video of the event, which includes streaming of some of the games can be found on FM Olexandr Prohorov's YouTube channel. It was played on lichess.org as a nine-round event with a time control of 3 minutes + 2 seconds increment. Final results for the top section can be found by clicking here.

Co-hosted by the Consulate General of Israel to the Midwest and the Chess4All Chess Club, participants competed with Israelis who were physically 6,000 miles away, but easily accessible via a computer screen. Bringing Israeli chess players young and old to the Midwest—virtually—was designed as a way to have chess continue during the pandemic.

Consul for Public Diplomacy Daniel Aschheim opened the event by reading a statement from Bruce Pandolfini: “The game of chess has a glorious history. It goes back at least 1500 years and its appeal is universal. Its journey has taken it across the globe, to all countries, languages, and cultures. Indeed, its challenge, art and joys unite us all. It is the perfect game for our difficult time.

"Chess has been on the upsurge for years, with scholastic programs and new software leading the way. Now, with the recent success of the Netflix series The Queen’s Gambit, for which Garry Kasparov and I were consultants, interest in chess is at an all-time high. Although we cannot share the same space as easily as before, we can still immerse ourselves in this wonderful game, playing online and communing in the pleasures of intellectual contest.

"Which brings us to our special event, this International Solidarity happening between Israelis and Americans. Chess offers so many benefits, and all of them will surely be showcased throughout the entire gala. The tournament, about to be screened live on the Consulate Facebook page, is undoubtedly going to be engaging and entertaining. It features one-on-one competition, at the same time uniting us in optimism and friendship.

"Kudos to this Chess4Solidarity initiative. I hope it continues to flourish, bringing people together, inspiring them to achieve the top of their own pantheon. To quote Chess Champ Beth Harmon from The Queen's Gambit, 'Chess isn't always competitive. Chess can also be beautiful. It's an entire world of just 64 squares.'

"For all those who love this game – who love life – I cannot think of more fitting words. Good luck to you all." 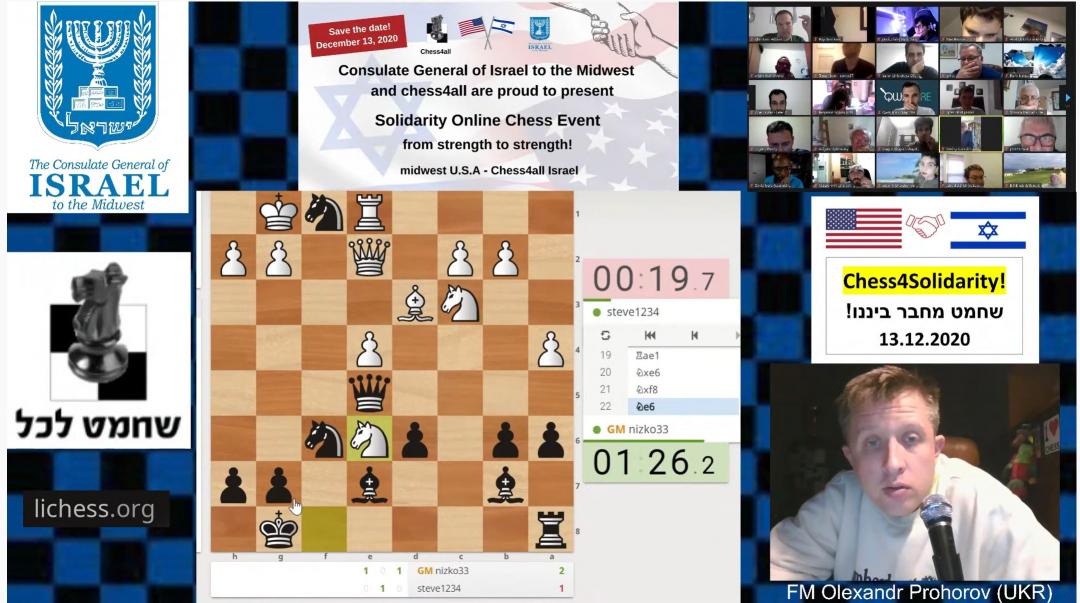 During the event, the first Queen Gambit Award was  given to Israeli WGM Marsel Efroimski. She has won the World Youth Championship twice, in the Girls under 12 and the Girls under 14 sections.

GM Dimitry Gurevich of Chicago  played and provided some historical context as he recalled the 1986 World Chess Olympiad that took place in Dubai. Israelis were not allowed to take part. Because of that they held a demonstration counter-competition in Israel, attended by only a few, including Gurevich who came as part of the protest. He notes that we are now fortunate to be in the midst of a total change as relations were normalized between Israel and the United Arab Emirates as a part of the Abraham Accords. He would welcome the chance to play in the next match in Dubai, Chicago or Jerusalem.