In January, I wrote two articles -- Five Chess Tech Tips for the New Year: Part 1 and Part 2 -- for US Chess News. These pieces seem to have been fairly well received, and they are still mostly accurate two months later. What’s changed? With the release of the AMD Ryzen CPUs, Intel may no longer be the processor of choice for chess players. There was, however, something of a common refrain in the comments to the piece and in letters sent to the editor. Most went something like this: it’s all well and good to know how much RAM to have and where to find database updates, but what about improvement? How can you leverage chess technology to become a better chess player? You’ll find out over the next few months. This is the first installment of four to appear here at US Chess News, all of which will outline a theory of improvement using modern chess tech. (Some installments may appear in multiple parts for space reasons – I’m longwinded that way.) I’ll argue that while the old advice remains mostly true, the ubiquity of the computer opens up new possibilities that need to be reckoned with. My goal in these articles is to combine the received wisdom with a consideration of those new possibilities, and in doing so, offer readers a clear program for chess improvement. 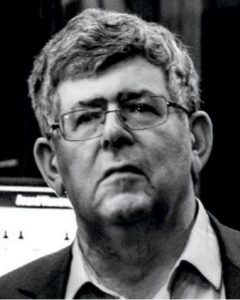 In this month’s installment, and borrowing heavily from the work of Mark Dvoretsky, I’ll outline what I take to be the goals of successful chess training. I’ll also discuss the tremendous value of analyzing one’s own games along with a set of best practices for doing so. Next month I’ll parlay the knowledge gained from self-analysis and incorporate it into a proper training system built on solving and sparring. We’ll then turn to everyone’s favorite topic, the opening, and then we’ll wrap the series up with a discussion of game preparation and literature. One final note before we begin: I will assume access to ChessBase and/or Fritz in these articles. For more on both programs, please check out my “Chess Tech Tips” Parts I and II from January. There are open source programs like ChessX and Tarrasch Chess GUI that will allow you to duplicate most of what is discussed here, but in some instances (as with the ‘X-function’ described below) there is no analogue. My apologies in advance.

“…If there was such a thing which was most important in my training, I would say it is development of practical skills rather than knowledge.”[1]

The books of the late Mark Dvoretsky are often held up as the exemplar of serious chess training. But most people – including, until recently, yours truly – misunderstood the root ideas embodied in those texts.  Beneath the authoritative pronouncements and byzantine analysis, Dvoretsky’s ‘philosophy’ was actually surprisingly simple. Serious chess training tries to bolster a player’s practical skill by honing intuition and judgment. It uses an active learning process, incorporating feedback from an expert teacher or trainer. The goal is not increased knowledge per se, although knowing appropriate theory is certainly an important element in Dvoretsky’s system. Instead, proper chess training aims at increasing a player’s successful solving of problems encountered over the board. Everything works towards that end. 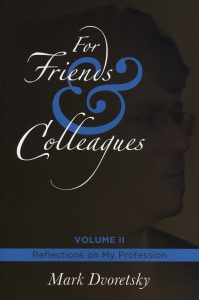 This is not a new or revisionist reading of Dvoretsky’s corpus. We see a fairly unambiguous articulation of this position in an article from 2003, “Philosophy of Training Work,” now available in English in For Friends and Colleagues, Volume 2: Reflections on my Profession. Dvoretsky says that the “main purpose” of his training has been to “develop personal thinking and decision-making skills.” This is achieved through practice and imitation, or through the solving of appropriate positions that offer students the necessary “chess images” to allow them to navigate situations over the board. (155-6) Dvoretsky makes many of the same points in a video series, “Endgames with Dvoretsky” with Chess24.com, one of the last projects he completed before his untimely death. [2] He argues that:

Modern chess may well be more concrete than in the past, but positional considerations, broadly understood, are still important in the majority of positions. 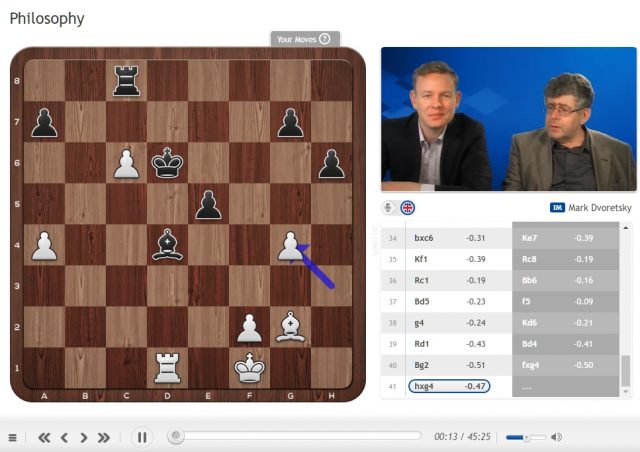 Dvoretsky’s system, in my view, aims the creation of effective mental representations or “chess images” that improve intuition and outcomes over the board. His training methods are active rather than passive, so that solving in game-like conditions replaces watching opening videos or the leisurely replay of master games. They are goal directed, aimed at training specific skills or overcoming weaknesses through continual assessment of techniques and outcomes. And they involve expert feedback and self-criticism, where errors are found and corrected through revision and modified training. Should amateurs take up Dvoretsky’s methods, ostensibly designed for use with very strong Grandmasters, as a template for their own self-improvement efforts? If so, what would this training model look like in practice, and how would it work without a dedicated Grandmaster coach at the helm? For me, the answer is clear. Yes, they should look to Dvoretsky’s model, even without access to a full-time coach. Modern chess literature and technology – engines, databases, online playing and video sites – can ‘stand in’ for a coach, helping players discover their mistakes and overcome them through focused training. (Note that I am not denigrating the importance of a good coach. What I’m describing here works in concert with, or in the absence of, such assistance.) The computer is, for all intents and purposes, a virtual Grandmaster assistant who never tires… so long as you pay the electric bill. 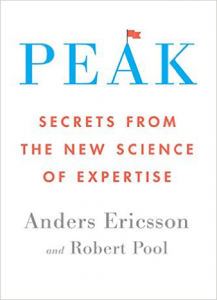 Some may wonder here: isn’t this basically the same thing as Anders Ericsson’s account of deliberative practice? It is indeed. Ericsson has long argued, most recently in his book Peak: Secrets from the New Science of Excellence, that excellence or expertise is substantially linked to how one trains. Deliberative practice is not, contra Malcolm Gladwell, simply a lot of practice. Players can practice for ten-thousand hours or more and make no progress. It’s how they practice, not for how long, that shapes the ultimate outcome. Most chess players know this all too well. We play some blitz online (without going through the games afterwards). We leaf through a book or two, and breeze through a few master games, adult beverage in hand. We watch Banter Blitz and opening videos, and we bash our heads against online tactics trainers. For all of this, we never seem to improve. Sound familiar? If we are to progress in chess, we can’t be what Axel Smith calls mummies, bumbling about without ever getting anywhere. We have to effectively structure our training to maximize results. A judicious use of chess technology and literature can help immensely here. If we take Dvoretsky’s training methods as our model, and marry them to modern chess technology, real improvement becomes possible…. provided we possess the Sitzfleisch to put in the required work. Where to begin with this proposed training system? Recall the inscription on the wall at the Delphic temple: gnōthi seauton, or “know thyself.” If we are correct in focusing on intuition and judgment in training, aiming at correcting individual weaknesses in our game, we should begin by trying to locate our weaknesses and intuitive blind spots. A systematic analysis of our games is ideal for such investigations, the results of which will give shape to the training methods discussed in upcoming months.

The analysis of one’s own games has long been held up as essential to improvement. The great World Champion Mikhail Botvinnik was among the first to make this argument:

"Home analysis has specific features of its own: you are not restricted by time, and you can move the men freely. Despite this difference between home analysis and practical play, there is much in common between them. It is a well-known fact that almost all the outstanding chess-players have been first-class analysts. The deduction is irresistible: anyone who wishes to become an outstanding chess-player must aim at perfection in the realm of analysis. There is one other essential difference between analysis and practical play; during play your analytical work is continually being tested against your critically-minded opponents, but, in home analysis, it is very easy to be unobjective. To fight this tendency and to get away from poor analysis, it is useful to publish your individual analytical work. Then, you are subject to objective criticism. In other words, published analysis, or, quite simply, annotation of games for the press, is a sure method of arriving at perfection."[3]

Garry Kasparov concurred with the Patriarch in the Preface to his 1986 The Test of Time:

“…I have come to realize distinctly that this [the thorough analysis of one’s own games] provides the foundation for the continuous development of chess mastery.”[4]

And, as we will soon see, Mark Dvoretsky – who taught at Botvinnik’s school in Moscow for many years – passed this admonition on to his students. A thorough study of one’s own games trains our analytical skills, and gives us an opportunity to reconsider the decisions we make during our games. What we discover is doubly useful, as we are refining our intuition in positions somewhat likely to appear in our future games. 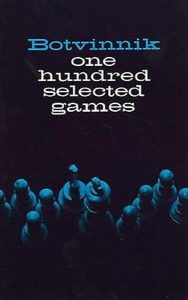 One curious feature of Botvinnik’s advice is his admonition to publish one’s analysis, so that the work will be subjected to critique and correction from readers. While there is something noble in this idea, and while I’m sure that the editors of state association magazines would welcome the submissions, there’s no intrinsic need to expose your games to public scrutiny in the age of the machines. Let me be very clear here. I am not suggesting that we turn analysis entirely over to our engines. Some might think that Botvinnik’s purpose in valorizing extensive home analysis was simply the discovery of over-the-board errors. If this is the case, and if we have nearly (but not completely!) infallible oracles at our disposal, why not let the computer do the heavy lifting for us? From my perspective, however, this is entirely wrong-headed. It is important to discover the mistakes we make in our games, but it is equally, if not more, important to analyze the mistakes we make in our thinking and assessment. Proper analysis of one’s games therefore requires that we focus on reconstructing and assessing the lines we rejected as much as the ones we played. Only after extensive self-analysis should we let our engines loose. John Hartmann is a columnist for Chess Life Magazine and the Chess Journalists of America winner for the “Best Review” category. For more information, visit his Chess Book Review Website and his Twitter account: @hartmannchess Tomorrow, look for part 2 of the March installment of "Chess Tech University".