Up, Up and Checkmate: Jen Vallens on a Sky-High Cover Shoot 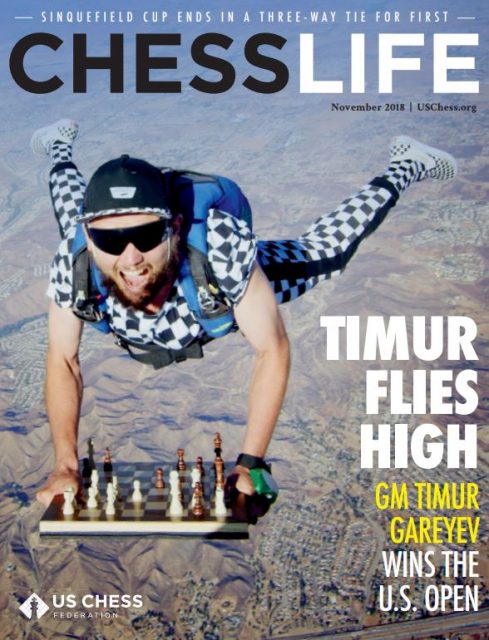 I have worked with U.S. Open Champion Timur Gareyev for the last five years and I have organized a lot of cool activities for him including his appearance on Leo"> Laporte podcast show, UCLA research study, event with the Society of Neuroscience and of course his Blindfold Chess world record event. But I have to admit that the most thrilling and rewarding was coordinating the November 2018 cover for Chess Life. After Timur won the U.S. Open, I received an email from the editor of US Chess letting me know that they wanted to do a cover story on the US Open and wanted to feature Timur on the cover.  They didn’t want the cover to be Timur playing chess, but rather doing one of his adventurous endeavors.  I immediately pictured Timur playing chess while flying through the sky.  I contacted SkyDive Elsinore as it is in California and I know Timur had jumped there many times. 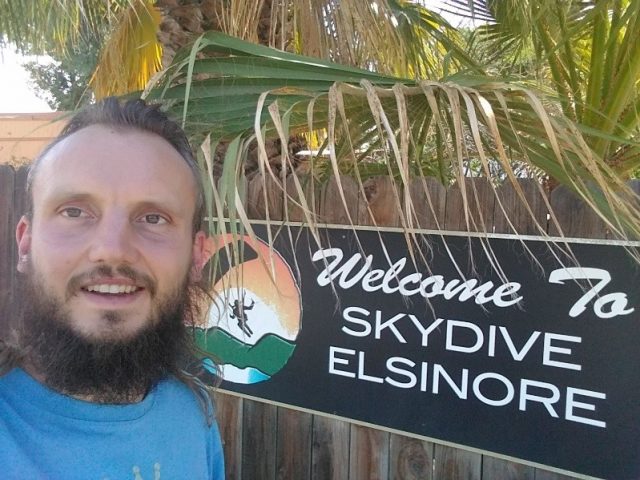 Coincidently, Timur would be in California for the San Diego Open in just a couple of weeks from the initial call from US Chess.  Believe me this was a serendipitous moment because of Timur’s intense international travel schedule.  I made a call and inquired about the project and reached Joe Jennings. Joe Jennings is an Emmy Award winning Aerial Stunt coordinator and has produced stunts for many big time feature films including Point Break and Charlie’s Angels and countless commercials.  You can check out his extraordinary reel pSm4bchpGWw">.  When I mentioned the project to Joe, it was another serendipitous moment as Joe had just rigged a chess set for skydiving to use in some stock photo images along with other games played “in the sky”.  Joe was thrilled by the prospect of working with Timur after visiting his website and learning more about him.  Although Joe was accustomed to working with high level budgets, he was willing to take the project on for the unique challenge we presented to him. Joe would need to construct a chess board affixing the pieces so they would not fly away. This turned out to not be such an easy feat.  After getting a chess position from Timur, I sent Joe 5 chess sets to work with.  We had to find wooden chess boards that would be small enough to maneuver in the air.  The only acceptable sets I could find in the time allotted were wooden travel sets. A day before the shoot, Joe called me to tell me that the sets only had 1 queen.  This presented a problem given the position Timur chose had two queens on the board!  We had to use queens from the other sets and now only had two boards to work with, meaning Timur would only have two chances to get it right! The construction of the board was more complicated than just nailing down the chess pieces.  The engineering of aerodynamics had to be carefully considered in the design of the board.  Joe would need the assistance of SkyDive Elsinore head instructor Romulo Antunes (Rom) to complete the project.  When Rom heard about the project, he explained “That raises the bar a lot. Joe and I have been jumping with board games lately and one of the biggest challenges was to deploy the parachute and keep holding the board.  We had to get Timur out of the plane, have him stable while holding the chess board, let him fly alone with the board, take the shots, take the board back from his hands, ALL IN 50 SECONDS.  Sign me up” Timur had around 150 jumps at the time, which according to Rom is considered great jumping experience but not necessarily enough to fly while holding a solid object. Rom had to assess his flying skill, coach him and be prepared in case he dropped the chess board midair. When the day came, I arrived to meet Timur at the drop zone, I was totally blown away with the experience.  The people, the place. There is something very spiritual about the skydiving community.  There is a connection and sense of belonging and every person I met was friendly and happy. It must be all those feel good adrenaline hormones pumping through the jumpers’ veins. 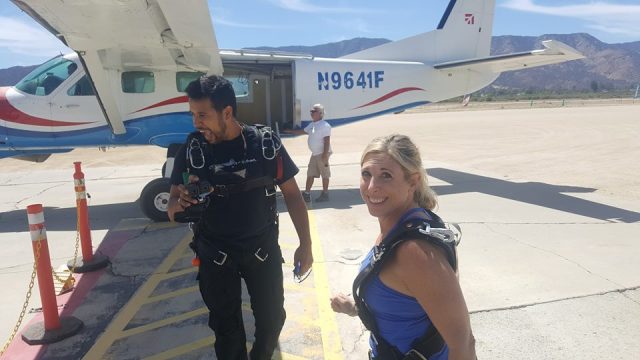 Timur did a practice run holding a blank wooden board.  The team; Joe and Rom were impressed with Timur’s skydiving skills and were confident that this project would be a success. However jumping with the chessboard prop would be more of a wildcard.  The weight of the board had to be considered along with the wind position and we only had enough boards for one practice run.  If the wind caused Timur to tilt the board just little, it could cause the board to go flying from Timur’s hands. Rom had to figure out how to solve this potential issue should the board ever free fall.  Imagine the danger of a flying wooden board hitting the ground at such a high velocity speed of 125 mph.  There is no liability release for death by chessboard!  Rom came up with the brilliant solution of attaching a cone to the bottom of the board to help direct the wind and built a small parachute attached to the board and Timur’s hand that would be activated in the event that the board became free. Timur did a few more jumps.  But instead of Timur being able to relax that night, we had to find something for Timur to wear for the actual photo shoot.  We had envisioned something to signify chess or a King and went searching high and low for something to dazzle.  It was close to Halloween so we started hitting costume stores.  But nothing seemed right.  We looked at the Flash costume, the Joker and even a Batman suit, but nothing seemed appropriate.  We visited store after store and become discouraged.  After 3 hours of shopping, we headed back to the car feeling defeated.  But I happen to look up and see a Tilly’s a skate shop and suggested we just pop in.  It was about 9pm and the store was soon to close and serendipitously again JACKPOT.  Head to toe Checkerboard!  It could not be any more perfect. 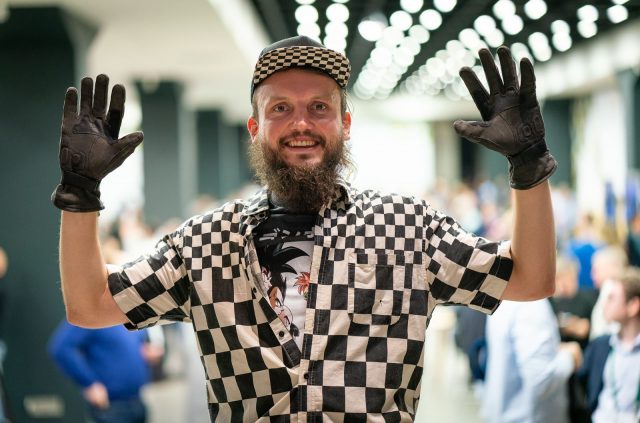 Timur Gareyev in St. Petersburg at the World Rapid and Blitz, Photo Lennart Ootes
(This outfit, along with the matching hat and shoes soon became Timur’s new uniform.) The next day we showed up bright and early and feeling confident now that we had the cover outfit and a board with a contingency plan.  But in true Timur fashion, any doubts about Timur’s performance were quickly lifted as he had a flawless jump and successfully held on to the board for the “money shot”.  Timur had first flown without a hat but we decided to do one more jump for fun with the chess hat and matching shoes and another successful run it was. When asked what it was like to Skydive with the added challenge of holding a chessboard, Timur explained “It is a bit like Surfing compared to Swimming.  Experiences divers tend to struggle with the balance of the board.” 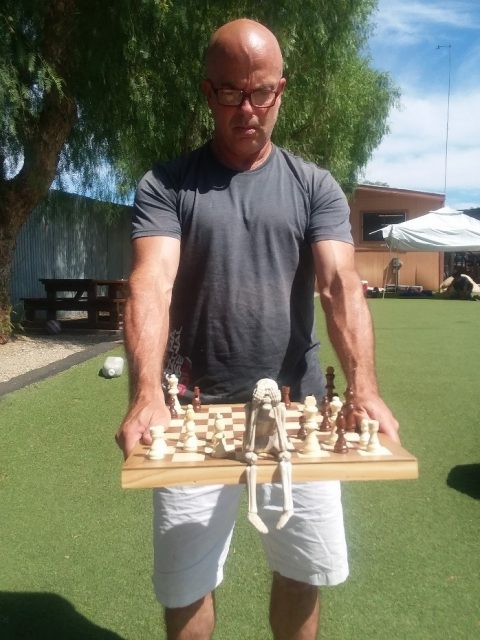 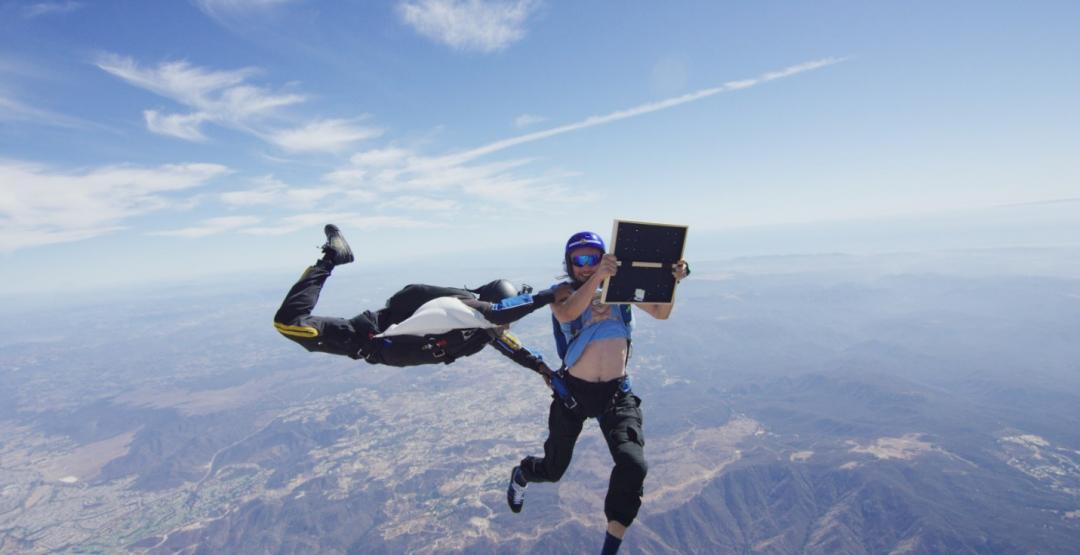 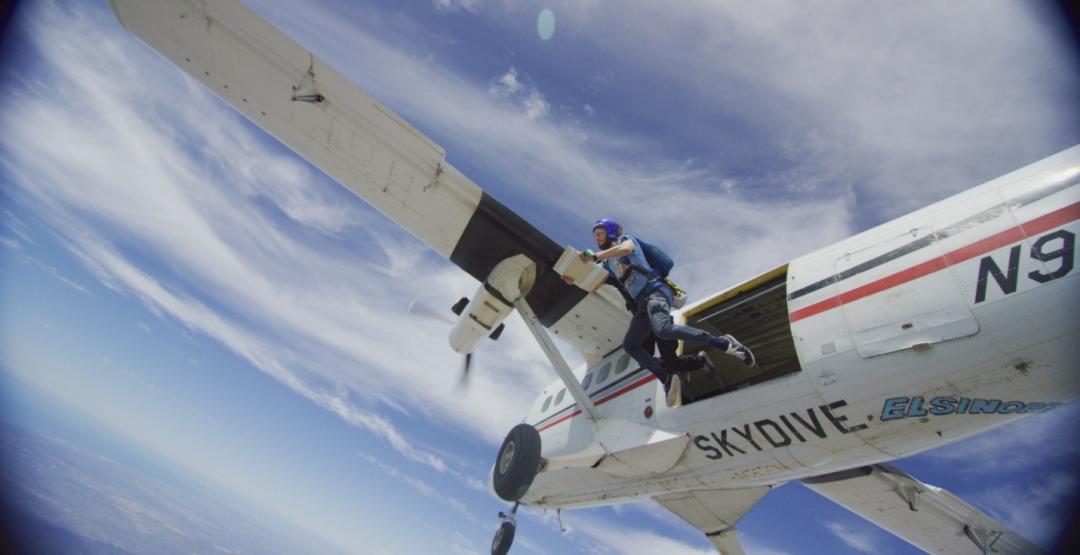 Day 1 shoot , Photo Joe Jennings
As you can see it is not easy to maneuver an object at 13,000 ft in the air when you have only 50 seconds! 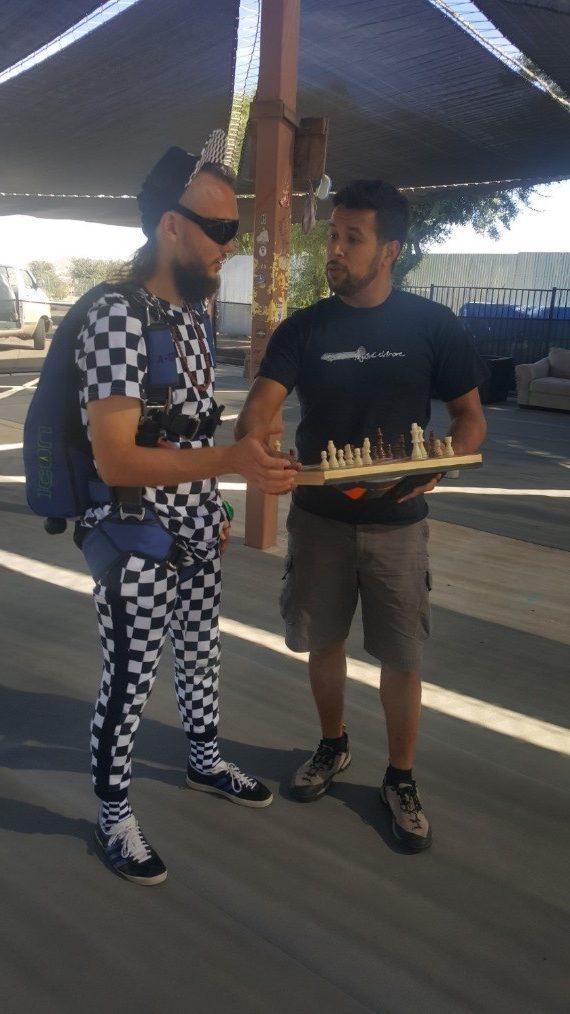 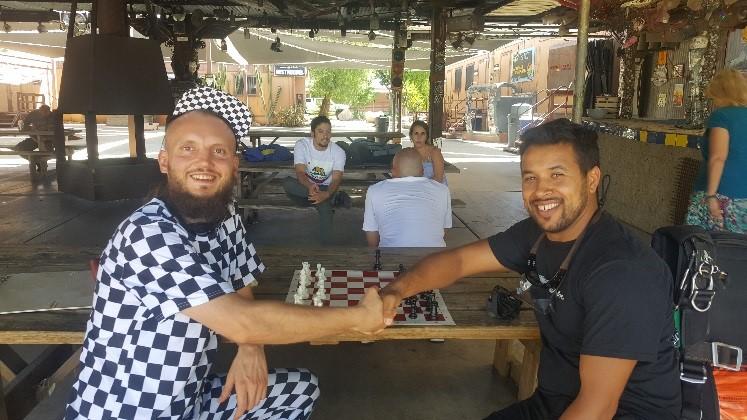 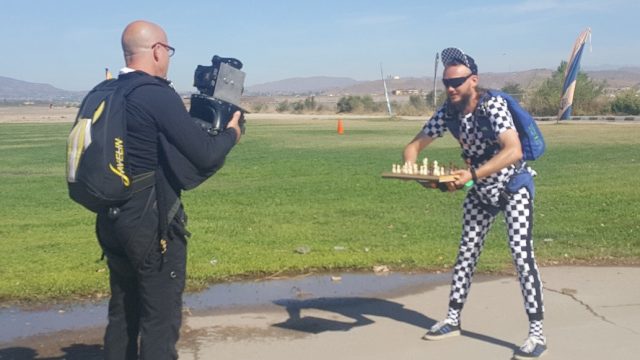 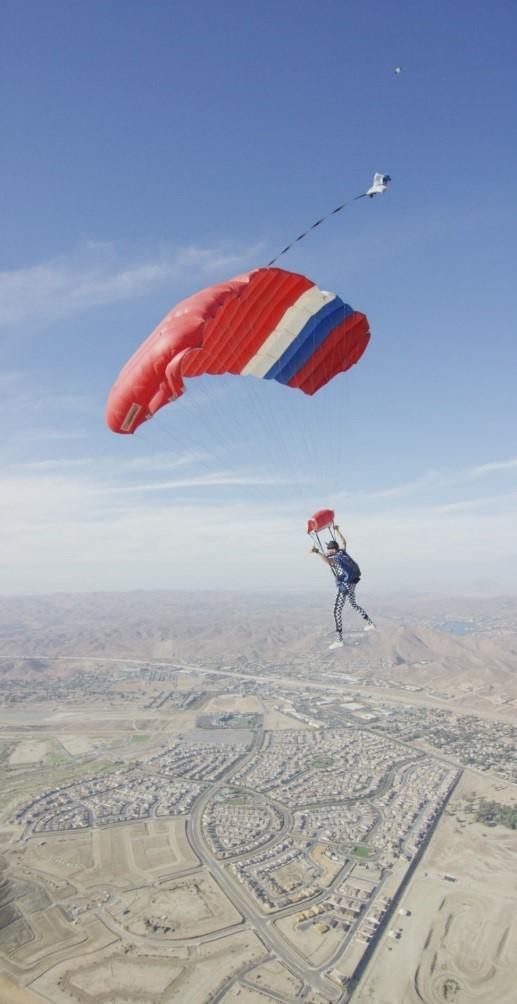 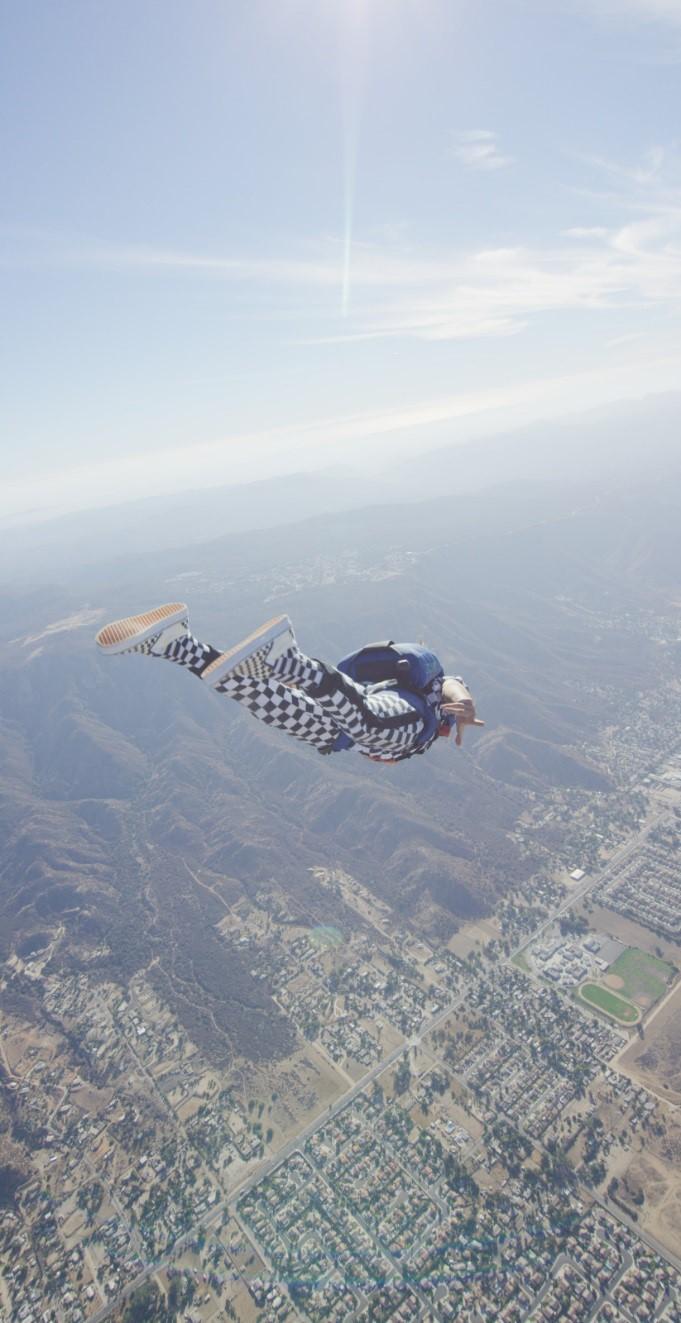 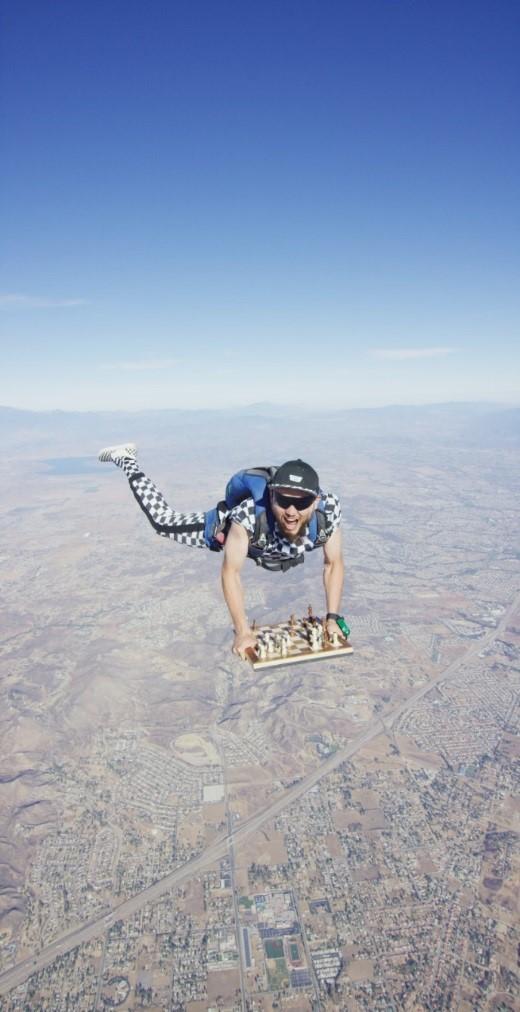 The money shot! Photo Joe Jennings
Day 2 – I decide to jump.  I know I am in trusted hands.  I go tandem strapped to Rom.  We even play around and skydive Blindfolded!  Check out the videos below.   Final words from Rom, “Mission accomplished!! Timur flew like a boss!! He dealt with the mental pressure, held the chess board in freefall, all while smiling at Joe’s camera. Fantastic team work!! We all landed safe and the result is in the cover of the Chess Life Magazine. When the shoot is over, the goofing off begins. 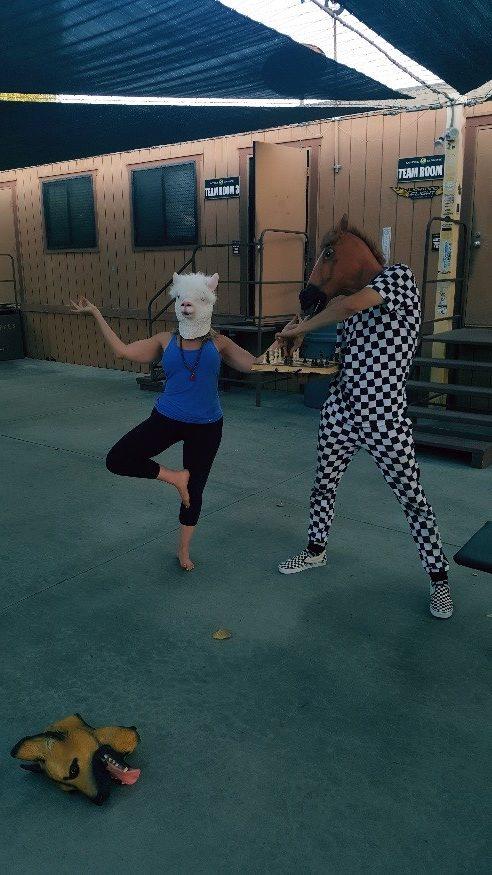 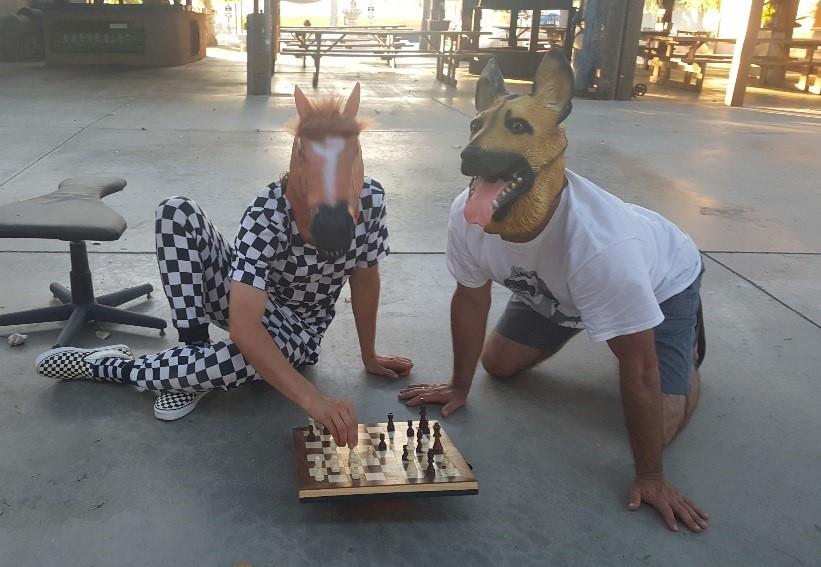 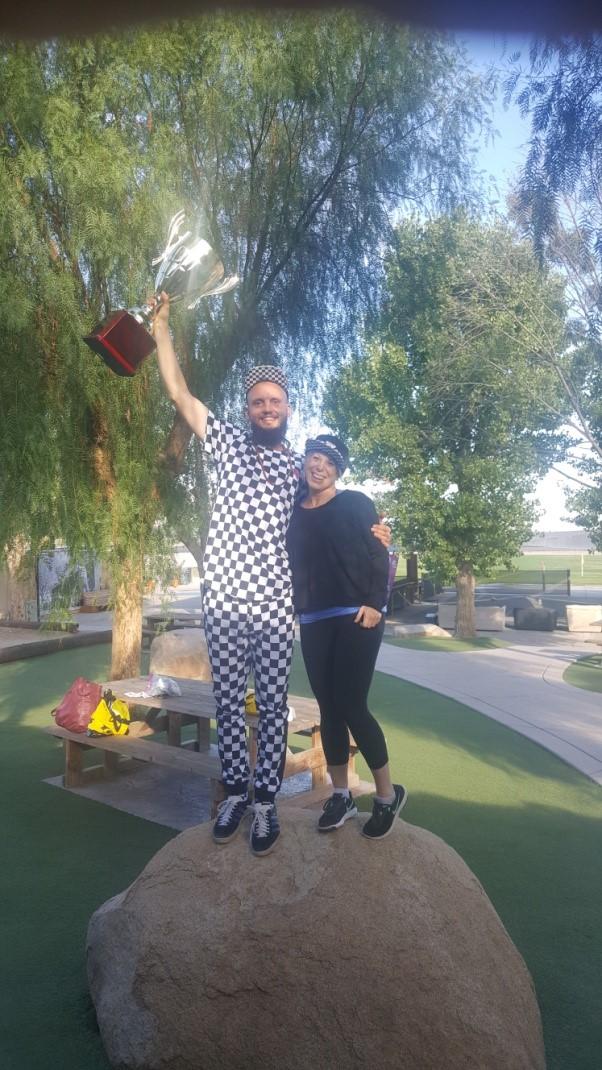 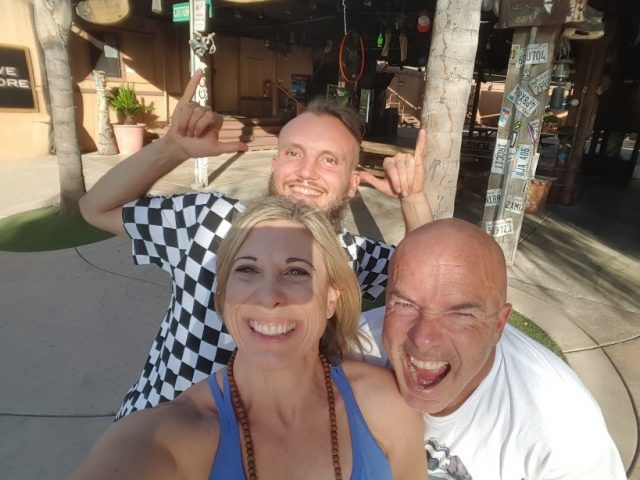 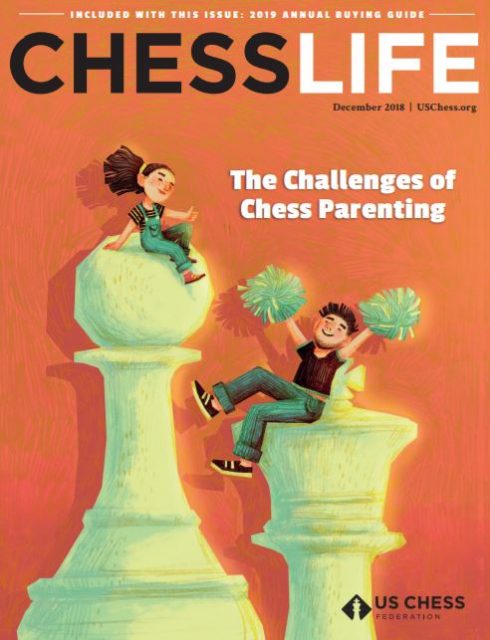 Jen Vallens wrote the cover story for the December issue of Chess Life Magazine on the Challenges of Chess Parenting, and was featured on our Cover Stories Podcast. She is also a judge for our Best of CLO competition, a countdown of our top articles of 2018.
SHARE: