The chess never seems to end in St. Louis. Last week saw a dramatic finish to the inaugural Cairns Cup, which is set to become the premier Women’s event on the international calendar. The Spring Chess Classic, part of a quarterly series of strong round robins, gets started on March 2nd. GM Vassily Ivanchuk is the star attraction in the A group. The Saint Louis Chess Club also plays host to the US Championship and US Women’s Championship from March 18th through April 1st. Players will do battle for a combined prize fund of nearly $300,000. So with a gap on the schedule, why not fit in another elite tournament? 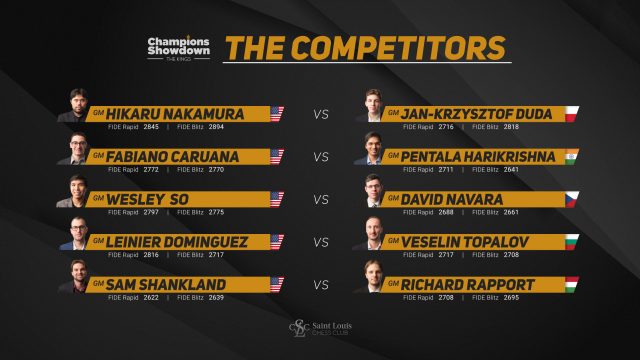 Champions Showdown Roster
Of particular interest is GM Leiner Dominguez’s participation. Having recently transferred his registration from Cuba to the United States, this is his first competition under the American flag. The Saint Louis Chess Club will be covering this event live on their YouTube channel, with GM Yasser Seirawan, GM Maurice Ashley, and WGM Jennifer Shahade on hand for the commentary. Tune in at 12:50pm CST each day for all the action!
SHARE: