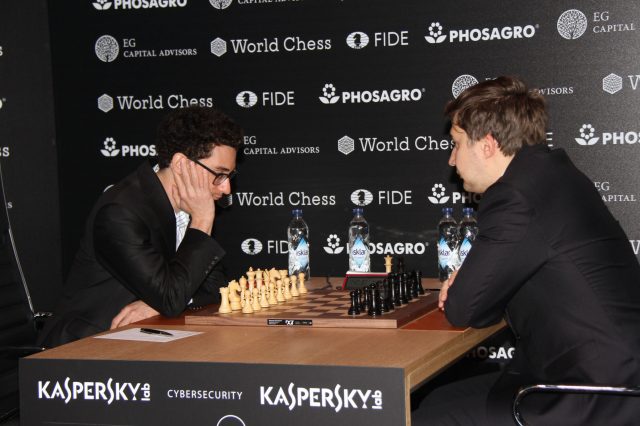 Caruana v Karjakin, Photo Cathy Rogers
At the moment, the Kühlhaus in the suburb of Kreuzberg in Berlin is hard to miss, with a sign telling passers-by that entering the last remaining part of a former refrigeration plant might improve one’s IQ. Renovations on the Kühlhaus began in 2010, creating a ‘space’ suitable for art exhibitions and raves. Of the six floors, the second and third look down on the first, where the Candidates Tournament, designed to find a challenger to World Champion Magnus Carlsen, is being played. The renovations appear to be unfinished although that may be the idea; a dark, grungy feel of the rough, formerly industrial interiors deemed to be part of the attraction. Before the Berlin Wall came down in 1989, Kreuzberg, surrounded on three sides by the wall, was a cheap place for West German artists to hang out and for immigrants getting a start in Berlin. After the fall of the Wall, the Berlin authorities decided to spruce up the city, suburb by suburb, and it seems to have been Kreuzberg’s turn for a long time. Construction work is still going on, including a building site for a new hotel almost immediately opposite the Kühlhaus. Grafitti – once a feature of the Western side of the Wall – remains ubiquitous, some artistic efforts planned by the city and many not. 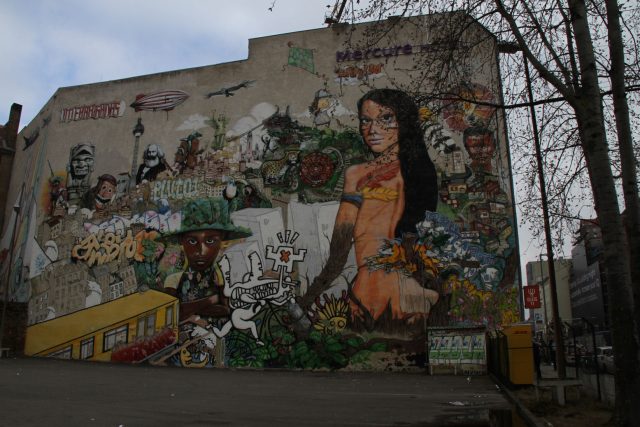 Photo Cathy Rogers
Approaching the Kühlhaus at 2pm – opening time, an hour before the Candidates games begin – one sees a small crowd of spectators waiting to be admitted below the bizarre giant billboard announcing ‘Entering this building might substantially increase your IQ. Chess does that to humans.’ One can only be thankful that the PR firm responsible for the slogan did not use some of their other ideas, such as ‘Smart is Sexy. This is the Sexiest building in the World this month’, or ‘Building with the highest IQ in the World’, or ‘Want a longer lasting IQ? Get Smart. Get Sexy. Get Chess’. (Sorry, I made the last one up.) 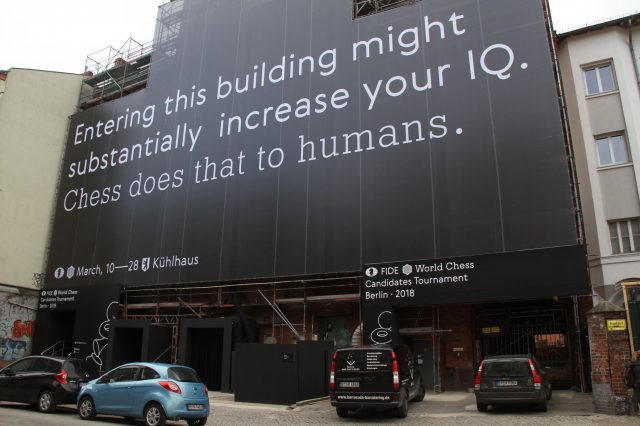 Photo Cathy Rogers
Entering the Kühlhaus, one is immediately struck by the darkness. One can barely make out the administration desk, the cloak room and in the far corner of the ground floor, an exhibition to commemorate the 150th anniversary of Emmanuel Lasker’s birth. Security guards patrol the building, checking that every person has a wristband with the right to access the floor they are on. The playing arena is on the first floor, the four games separated by partitions so that players cannot see the other games without walking around. The boards themselves are well lit but everywhere else is dark. Above the playing arena the players can see the spectators on the second and third floors, leaning over balustrades to view one game at a time. On the second floor the spectators don’t have much choice – there are no places to sit except the rough wooden floor. However, the third flood has about two dozen seats – including two couches! - and two television screens showing the games. Those screens have been moved well away from the atrium area following Mamedyarov’s complaints on the first day that he could see Judit Polgar explaining on a screen how his opponent Sergey Karjakin could draw a difficult endgame. (Karjakin’s seat was less well placed, and he lost.) It should be noted that the luxury of entering the third floor and finding seating is only available to those paying the most expensive ticket prices (as well as family and seconds of the players.) The fourth floor, designated the Fan Zone, is the most congenial for spectators. There is decent lighting(!), bench seating in front of the German language commentators, vending machines for snack foods and hot drinks, a souvenir shop, chairs, and a separate bench seating area where the post-game press conferences are held. 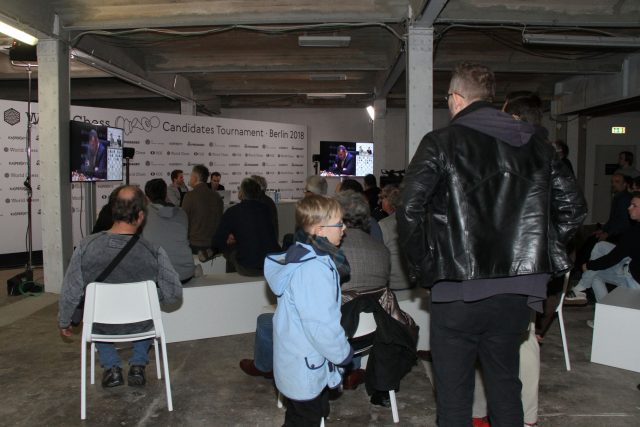 German language commentary at the Berlin Candidates, Photo Cathy Rogers
One floor above is the press room and, separated by a black curtain and some security guards, the Gold Zone, for those choosing to pay $140 for their daily ticket. (Prices are half price since the opening day and will double again for the final two rounds.) Those in the Gold Zone can watch the English language commentators. (In round 5 these were GM Alexandra Kosteniuk and IM Lawrence Trent, whose failure to agree on many matters made for entertaining viewing.) The open bar seemed a bigger attraction for many. Incidentally, the ground floor has a secret VIP area, which includes a (rare) bathroom – a feature which will soon become relevant. Shortly before the games the players appear in the playing hall and are meticulously scanned for electronic devices by a security guard. Such scanning is probably unnecessary with the eight current Candidates but is de rigeur in top tournaments nowadays. 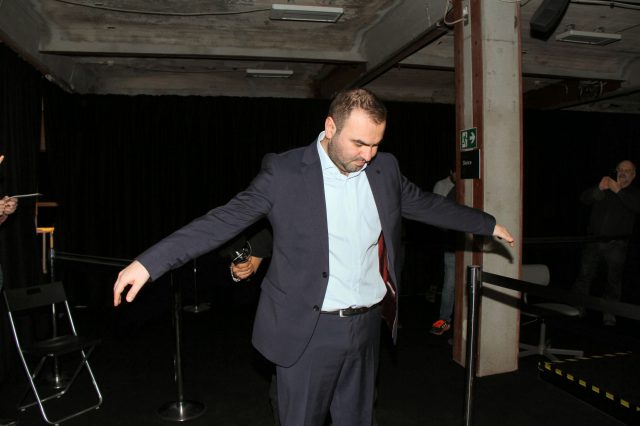 Mamedyarov getting checked in, Photo Cathy Rogers
Unfortunately, as so often, the scanning is essentially pointless, given the ease with which players could by other methods, if they wish, access electronic devices. Early in the tournament there were plenty of complaints about the single toilet on the playing level of the building. Apart from plumbing problems, Alexander Grischuk noted that non-players would sometimes use the players’ toilet. For a time trouble addict such as Grischuk, needing to cross his legs during a time scramble was not fun. The organizers pointed out that they had announced the day before the tournament – when the venue was in large part a work in progress - that players would be allowed to go down a floor to the VIP bathroom. However, apart from the lack of convenience, the VIP area was far from secure and a player could, deliberately or otherwise, gain valuable information about their game there. There was not much to be done about this, as indeed the noise from the second and third floors on the first day when there was almost a full house. With the numbers of paying spectators dropping away – around 120 for round five – the noise levels were minimal but in any case the players simply had to accept that the Kühlhaus is not entirely suitable as a venue for a top level tournament and get on with competing. And compete they did. After just over a third of the tournament has been completed, many are already speaking of this Candidates tournament as a classic, full of spectacular fighting games. The two US players are at opposite ends of the leader board, with Fabiano Caruana on 3.5/5, half a point clear of top seed Shakhriyar Mamedyarov and veteran Vladimir Kramnik. Wesley So is tied for last place with previous Candidates winner Sergey Karjakin on 1.5 points. The fortunes of the two US players diverged in the very first round – players from the same countries were paired as early as possible - when Caruana won convincingly. Worse was to follow for So in round two, as he fell the next day to fellow first round loser Grischuk. Since then So has consolidated his position with draws but if he wishes to get back into the race he will need to score at least one win before the halfway mark and hope that his extra Whites in the second half of the tournament can be utilized. Over rounds two and three Caruana drew two enormously entertaining games, against Ding Liren and Mamedyarov, but it was Kramnik who stole the show, taking the tournament lead with a brilliancy against Levon Aronian. The following day Kramnik went from rooster to feather duster and Caruana was the man who took him down. Finally most of the players took a breather in round 5, with three dull draws. Caruana admitted, “I was just happy that for the first time in three days, my opponent didn’t have [lots of] passed pawns.” Aronian tried to take the opportunity to move into second place behind Caruana, but he could not find his way through a thicket of complications. 2018 Candidates Tournament Scores after round 5: 1.Caruana(USA) 3.5; =2.Mamedyarov(AZE), Kramnik(RUS) 3; =4.Ding(CHN), Aronian(ARM), Grischuk(RUS) 2.5; =7.So(USA), Karjakin(RUS) 1.5. The Candidates Tournament continued on Friday with round 6 starting at 10am AEST and round 7 will take place on March 18, Sunday at 10 AEST. See A Couch Potato’s Guide to the Candidates for details on how to watch.
SHARE: