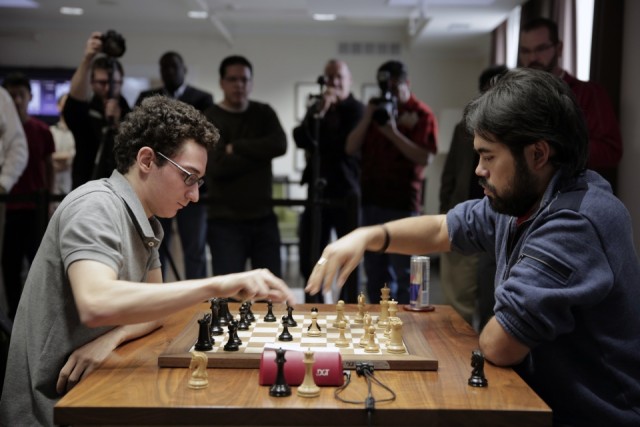 Basque Chess At the start of the match, two boards were set up side-by-side between the players.

Basque: a chess variant where players face each other in two games simultaneously with reserved colors.

The competitors also had to juggle two clocks beside both boards with 90 minutes + 30 seconds increment. One important aspect of basque chess was avoiding a "double ticker", where a player's clocks run on both boards. For this unique form of chess, each player was given a rolling chair to move from one game to the next quickly. With the black pieces, Caruana achieved a significant edge from the opening. Can you find Black's path to an initiative?

Caruana missed this continuation and instead played 13...Ne7, allowing Nakamura to equalize.

With the white pieces, Caruana also seemed to have an advantage until Nakamura uncorked 21...e4!?, a positional pawn sacrifice to activate his pieces.

Eventually, both games ended in a draw.

For the Fischer Random rounds, the organizers allowed viewers at home to participate by choosing the starting positions.

Twitter followers of @CCSCSL were given eight possibilities chosen by Kasparov himself, ranging from "traditional" to "very chaotic", to vote on. Here were the starting positions that gained the most votes: Game 1: "Non-Traditional" WGM Jennifer Shahade described this position as "pretty wild" because "both bishops aim at the enemy king".

Game 2: "Bishops Side-by-Side" Although all of the pawns are defended in the beginning, Kasparov admitted that: "I don't know how to make the best move... because the moment you move any of these pawns they will be unprotected."

Game 3: "Very Chaotic" This game featured a very unusual pawn structure: On the third move, both Nakamura and Caruana played g4 and g5 respectively, opening up their bishops on h1 and h8.

This position was probably the closest to a normal chess game with the king and queen on their normal squares and the bishops already in fianchetto positions.

By the end of the day, Nakamura, the more experienced Fischer Random player, emerged with a one point lead in the match.

Rapid Although Nakamura is the higher rated rapid player, Caruana took over the lead in this phase of the match. He managed 3 points out of the 4 games, going undefeated. The highlight was Caruana's precise positional play to turn a slight advantage into a victory. Blitz Even though Nakamura was a point behind in match points, commentators GM Yasser Seirawan and WGM Jennifer Shahade still considered him the favorite. This isn't a surprise: Nakamura is ranked #1 in the world in FIDE blitz ratings. The surprise was that Caruana took over in the first blitz game and didn't let up. Caruana admitted, "I was ready to take a draw in the first game" until he saw the key move at the last moment. Can you find Caruana's winning move, played with only seconds left on the clock?

66...Be4! and Nakamura immediately resigned.

By game 16, Caruana had secured the match victory with two games to spare.

Here is the final scoreboard for the match: 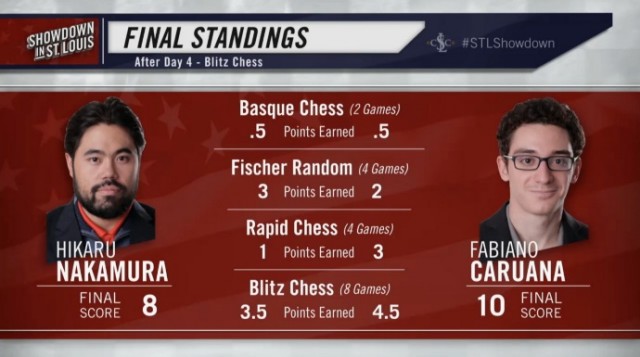 One of the highlights of the match was Negi's brilliantly played double victory in basque chess.

Here is his game from the White side, defeating a Sicilian Dragon.

In Fischer Random, however, Hou evened the score and then soon took over the lead. 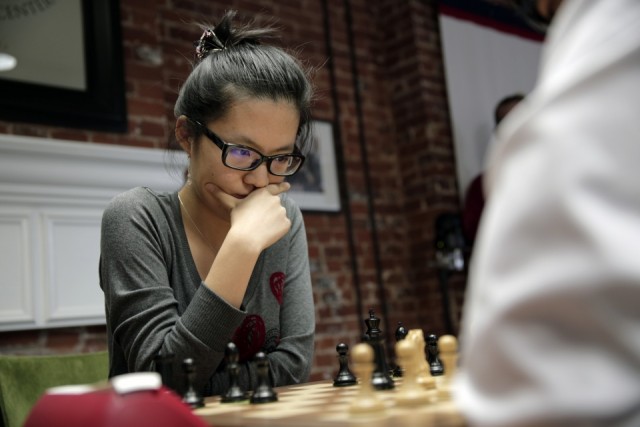 According to GM Alejandro Ramirez, "Despite never having played Fischer Random in a tournament setting, she showed absolutely dominance over the nuances of development, pawn structure and piece placement in every single game."

Since blitz and rapid chess are particularly strong points for Hou, she continued to increase her lead with each phase of the match.

One of her most impressive victories was from the black side of a Hedgehog in rapid. 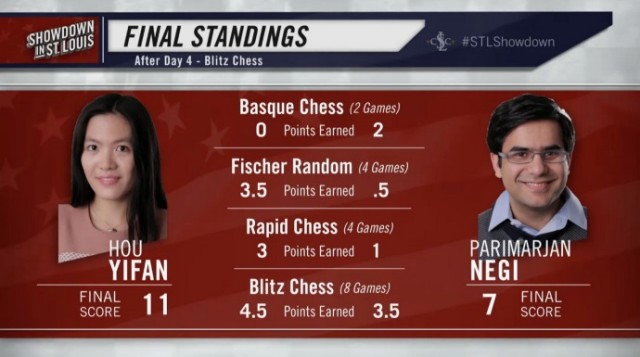 More information on the The Showdown is available at the Official Website.