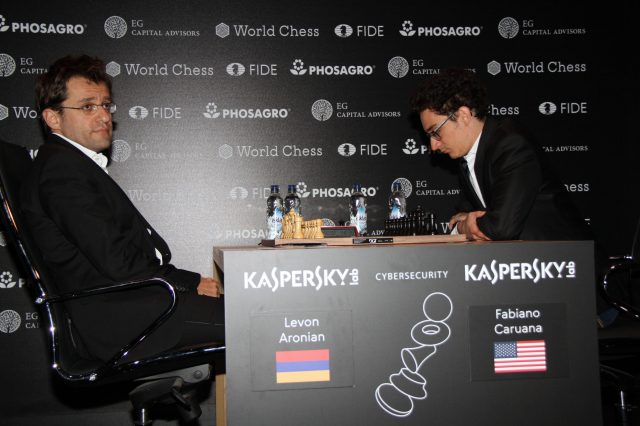 Other the past two days Berlin has gone into deep freeze mode, the temperature falling below 20 degrees. The Kühlhaus, the venue for the 2018 Candidates tournament has lived up to its name, with the concrete floors and insulation-free walls not capable of heating all areas adequately. Nonetheless the crowds coming to see eight of the world’s elite Grandmasters have picked up, with 150+ chess fans gathering on the high floors of the Kühlhaus to look down on the Grandmasters in action or enjoy the commentary in the Fan Zone. The fans in Berlin, and the tens of thousands watching online via multiple sites, have been treated to what many are describing as the most exciting Candidates tournament in living memory, given the violence of many of the games. In a tournament where only first place is of great value, one might expect competitive chess. However in Berlin even the tail-enders are fighting hard; in the last two rounds the player in last place has won his game. Perhaps the less-than-ideal playing conditions have contributed to the up-and-down nature of the games but two have handled the conditions better than the others: the front-runners, both undefeated, Fabiano Caruana an Shakhriyar Mamedyarov. (China’s Ding Liren is also undefeated but is yet to win a game.) In the modern era, the winning recipe for qualifying to challenge the World Champion from the Candidates Tournament has been to be in the lead at the halfway mark. In fact one has to go back to 1959 to find a Candidates Tournament where the winner was not leading halfway through the event. Back in those days, when Grandmasters were a different breed, the Candidates tournament was a 28 round marathon, rather than the modern three week walk in the park. 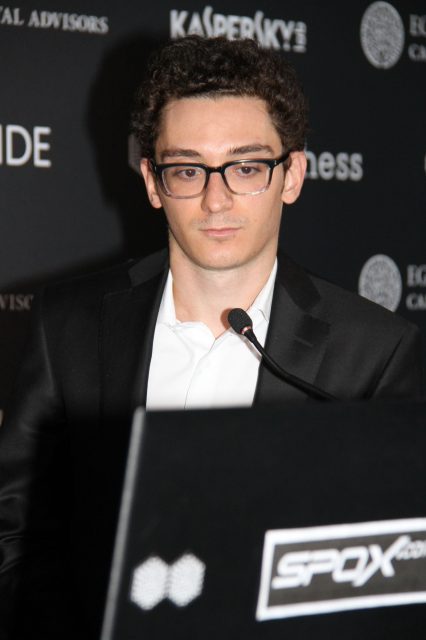 So, if history is any guide, after seven of fourteen rounds at the 2018 Berlin Candidates Tournament Caruana should be feeling very comfortable. Caruana is sitting on 5/7, half a point clear of world number two Mamedyarov following Caruana’s dramatic seventh round time scramble against Aronian. Caruana needed to keep his nerves well in check to survive his seventh round game as Aronian sacrificed two pawns straight after the opening. The critical moment of the game was reached with both players running into severe time trouble…

Caruana, however, was not expecting an easy run home: “Towards the end, players will have to go for it; we won’t see any less action and there will be lots of nerves. Sometimes even +4 [9/14] may not be enough. I’ve been in this situation before – I’ll try to stay calm.” Nonetheless, Caruana expressed quiet confidence that he could keep going. “I am happy so far; I’ve played good fighting chess. I prepared well before the event. I have had some luck but I feel as if I’m in good shape.” Asked if he felt extra pressure playing in a Colosseum-type environment, with spectators peering down on the playing arena from above, let alone talking and taking photos throughout the round, Caruana replied diplomatically with “I don’t think they had bananas and dates at the Colosseum!” (Fact check: Dates were a popular food for the Romans, bananas not.) Caruana’s main rival Mamedyarov, had had fewer ups and downs than the American and looks capable of winning more games, so Caruana may need the big winning score he was predicting to stay ahead of the Azeri. The dreams of the other US hope, Wesley So, may have ended in round seven when he threw away a defensible endgame against Sergey Karjakin. 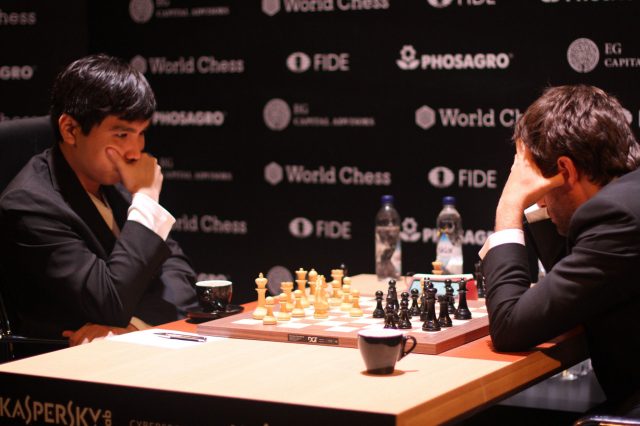 So vs. Aronian, Photo Cathy Rogers

A day earlier So had been riding high following a magnificent positional display against Aronian but now he can only remind himself of a strange statistic; the person tied with Aronian after round seven has always gone on to be the World Champion’s challenger. The winners in 2013, 2014 and 2016 - Carlsen, Anand and then Karjakin - were always tied with Levon Aronian at the halfway point, before going on to outpace the Armenian. Unfortunately for both So and Aronian, Aronian’s score at that point of the earlier tournaments had been 4.5 or 5, not 2.5 as here.